RULES in place to stop the spread of Covid-19 could be reintroduced as cases continue to rise.

Infections are on the up in younger age groups as society opens up once more.

Ministers are said to be drafting plans that would see the reintroduction of some restrictionsCredit: Getty

Yesterday the Government reported 39,906 new Covid diagnoses, which was almost 18 per cent lower than last Thursday’s figure and down for the first time since May.

Experts have warned this is a temporary fall in cases and that it doesn’t affect the current case rate – as there is always a lag in data.

In the seven days before restrictions were lifted, data showed that infections were highest in the 20 to 29 group with over 1,154 infections per 100,000 people having been recorded.

This is the highest rate in any age group since the pandemic began.

The country reopened once again on Monday, with nightclubs now being allowed to welcome back customers with other parts of society also scrapping mask wearing and social distancing.

Now, ministers part of a Covid task force are set to be drawing up plans which will include fresh guidance on working from home, social distancing and mask wearing.

Sources told the Independent that there was “no plan” to return to a hard lockdown that had been seen at the start of the year with others saying adding restrictions would be a “last resort”.

One expert told the Independent that the government’s current plan for reintroducing lockdowns fits with the way they have handled previous waves.

They said: “First ignore the problems and deny action is needed, then realise there is a problem and tell people it is up to them to act, then, belatedly, impose greater restrictions than would have been needed if one acted early.”

Step four of the government’s roadmap out of lockdown states that the government will continuously monitor the situation and would “retain contingency measures to respond to unexpected events, while accepting that further cases, hospitalisations and deaths will occur as the country learns to live with Covid-19.”

The government has however acted on plans to scrap isolation for people who are in certain jobs after hundreds of thousands of people were “pinged” by the NHS app – which means you have to isolate for up to ten days.

Many NHS staff are also isolating, at a time when cases are on the rise.

Government data shows that on a daily basis, 39,906 people are testing positive with the virus.

When it comes to hospitalisations, 788 people a day are presenting at hospital and at present 4,861 patients are in hospital with the virus.

Deaths have jumped 33 per cent from the 63 recorded a week ago and also remain well above the 35 reported a fortnight ago.

And a further 788 people were hospitalised in the past 24 hours – a rise on the 602 admissions recorded two weeks ago on July 8. 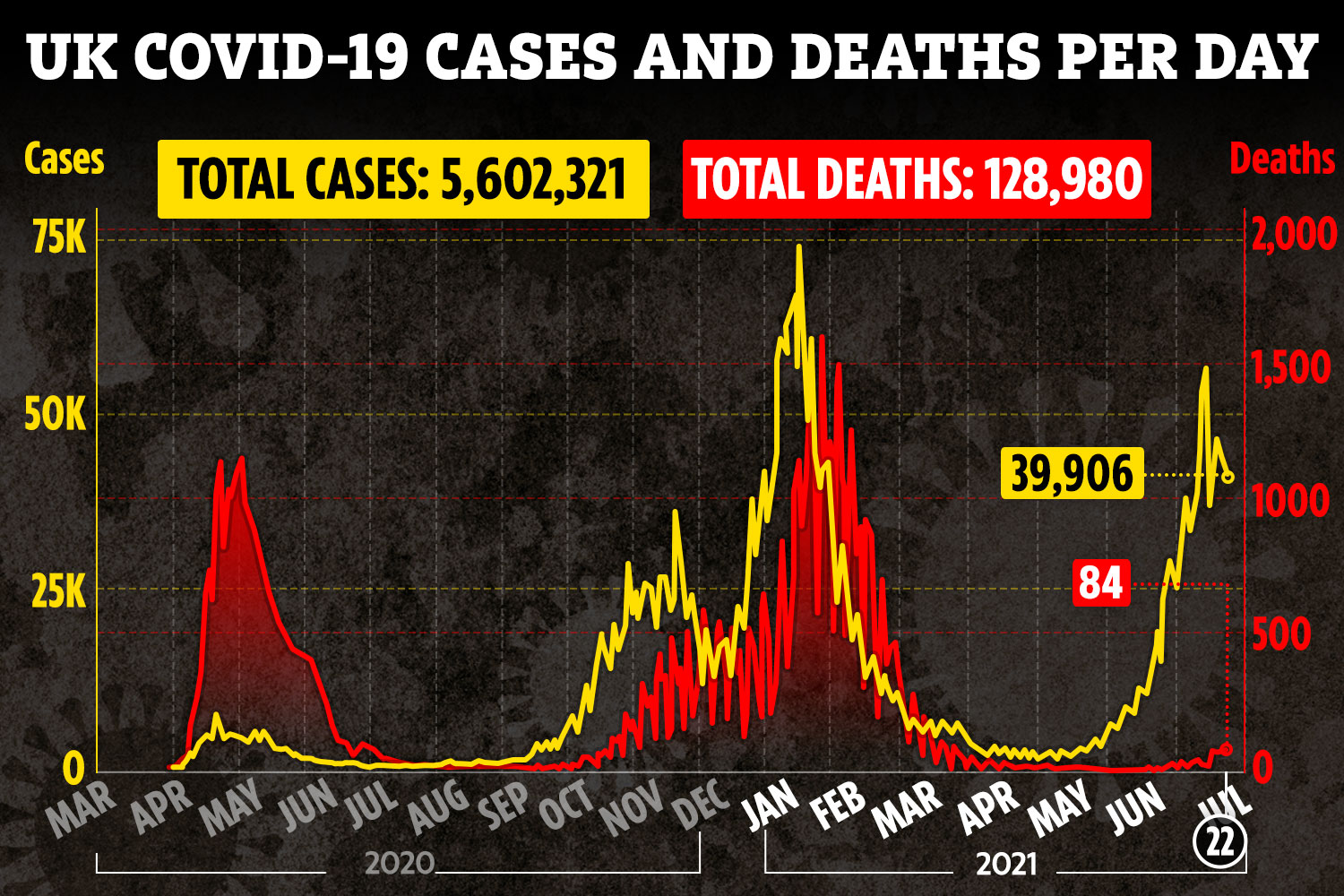 Sir Jeremy Farrar, director of the Wellcome Trust said the only way to prevent the “pingdemic” was to drive down transmission of the virus.

He told BBC Radio 4’s Today programme: “If we have lower transmission in this country by continuing to wear masks and avoiding poorly-ventilated indoor settings as much as we can until as much as the population is vaccinated as possible, that will drive down transmission and also help reduce the number of people having to isolate.”

“Lockdowns are extreme, we’ve moved on from lockdowns, but lockdowns are everything thrown at it together and they do drive down transmission.

“We’re not in that world now but there are things we can still do, wearing masks, yes, it makes a difference, it doesn’t affect me or protect me but it makes sure that if I was infected I didn’t pass it on to someone who was vulnerable.

“Avoiding poorly-ventilated settings, particularly indoors, multiple mixing of households, these are all some of the biggest risks, plus getting as many people vaccinated as possible.”

The Sun has contacted the Department for Health and Social Care.