BORIS Johnson has been forced into a U-turn on using a pilot scheme to avoid self-isolation after coming under fire.

Downing Street had announced on Sunday morning that the PM and Chancellor Rishi Sunak WOULD be joining the scheme rather than locking themselves away.

The PM has been forced to U-turn on using a pilot scheme to avoid self-isolationCredit: Getty

However, within three hours they had dramatically changed tack and said the two ministers would, instead, be following the normal rules on self-isolating.

That means Boris will isolate at his Chequers retreat until next Monday – after coming into contact with Covid-hit Health Secretary Sajid Javid.

Under the pilot Mr Johnson and Mr Sunak would have worked as normal by taking daily tests along with other participants across 20 public sector bodies.

Boris said that he had thought “briefly” about circumventing national protocols but decided against that move, reports the Times.

He admitted: “It’s far more important that everybody sticks to the same rules. That’s why I’m going to be self-isolating until Monday, July 26.

“I know how frustrating it all is but I really do urge everybody to stick with the programme and take the appropriate course action when you are asked to do so by NHS Test and Trace.”

Mr Sunak said that while the pilot scheme was “fairly restrictive” he recognised that “even the sense that the rules aren’t the same for everyone is wrong”.

It’s far more important that everybody sticks to the same rules. That’s why I’m going to be self-isolating until Monday, July 26

Labour boss Sir Keir Starmer compared the Tory top two to “failed bank robbers who only offered to give the money back because they’ve been caught.”

He then added: “The PM must self-isolate or he risks destroying Test and Trace.”

To compound the embarrassment, Transport for London, one of the organisations which No 10 said was also taking part in the pilot, said that it had yet to receive formal notification that it was part of the trial.

A spokesman said: “The current Test and Trace rules on self-isolation have led to vital control room staff being unable to come to work, causing disruption on some Tube lines.”

The news comes as the PM is today under mounting pressure to do the right thing and tackle the so-called pingdemic.

MPs want Test and Trace isolations to be axed as staff shortages cripple thousands of businesses.

They warn any delay will worsen the UK-wide staffing crisis caused by the pinging of close contacts of those with Covid.

A further 48,161 Covid cases and 25 deaths were recorded yesterday.

They came amid reports that tens of thousands are deleting the controversial NHS app that pings close contacts of any positive case.

Hair salons, nurseries, sports facilities and cafes have been left short-staffed. Marks & Spencer said it could be forced to reduce its hours.

Royal Mail sorting offices have also been hit while garden waste collections in some areas have been suspended to allow absent council staff to focus on bins.

And there were warnings of an MoT backlog after garages had to cancel huge numbers of bookings.

Former PM Tony Blair warned it could soar to ten million by the peak of the third wave, thought to hit in early September. 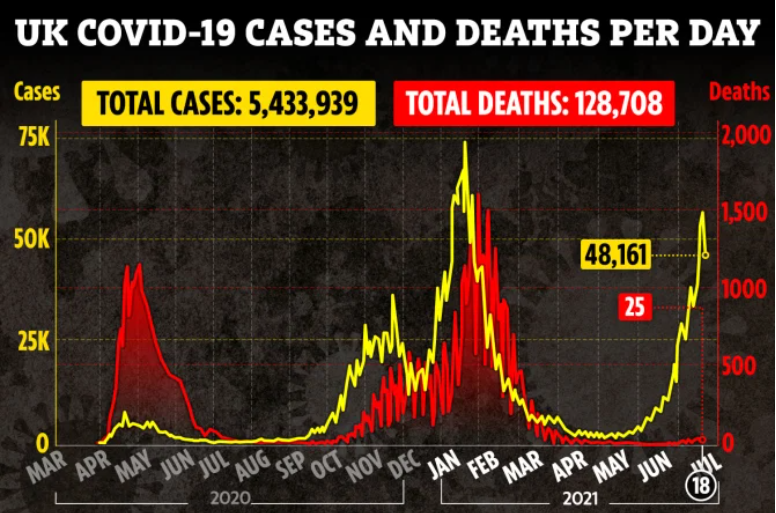