FACE masks, working from home and vaccine passports could be set to return if Covid cases continue to rise.

Downing Street warned of a “challenging winter” as infections rose to their highest level in three months yesterday.

Face masks could return if the Government triggers its plan B action responseCredit: Rex

Last month Boris Johnson set out a Plan B for further restrictions – including masks, vaccine passports and working from home in case the virus surged.

He has not yet confirmed a threshold for triggering the plan, but experts fear the situation is worsening.

Yesterday another 915 Covid admissions to NHS hospitals were recorded, the highest figure in a month and almost reaching 1,000 a day.

The Government is now keeping “a very close watch” on the latest statistics.

The PM’s official spokesman said: “There is absolutely no plan to introduce Plan B currently. We retain that capability if required if we believe the NHS is coming under unsustainable pressure.

“We obviously keep very close watch on the latest statistics. We always knew the coming months would be challenging.”

Booster jabs are currently being used to bolster immunity in the most vulnerable of society, who got their first two jabs several months ago.

The third shots are the heart of the Government’s plan A for Covid during winter.

But data show the majority of at-risk people have not yet had their additional jab, and may not for several more weeks or months into the winter.

Professor Andrew Hayward, a member of Sage, told Radio 4’s World At One programme: “We shouldn’t be complacent because there is still huge potential for the NHS to come under a lot of pressure and for there to be a lot of unnecessary deaths.

We obviously keep very close watch on the latest statistics. We always knew the coming months would be challenging.

“So we need to get the vaccination rates up and we need to be prepared potentially to think about other measures if things do get out of control.”

The NHS says people will be invited for their booster jab at least six months on from their second dose, when the effects are thought to start wearing off.

It means only those who got their second dose in mid-April or earlier are being invited at the moment.

Professor Ravi Gupta, a member of the New and Emerging Respiratory Virus Threats Advisory Group (Nervtag), is one expert calling for the Government’s plan B to be implemented now.

Prof Gupta told the Financial Times: “We’re just far too reliant on our relatively modest vaccination coverage as our only line of defence.”

Martin McKee, professor of public health at the London School of Hygiene and Tropical Medicine, said England “should immediately be activating” plan B.

Professor Neil Ferguson – whose scientific modelling led to the March 2020 lockdown – said recent modelling suggested that if booster uptake was high enough and the rollout was fast enough, additional measures might not be necessary.

But he added that if cases continued to rise over the next two weeks, “then clearly I’m sure the government will be re-evaluating the measures in place”. 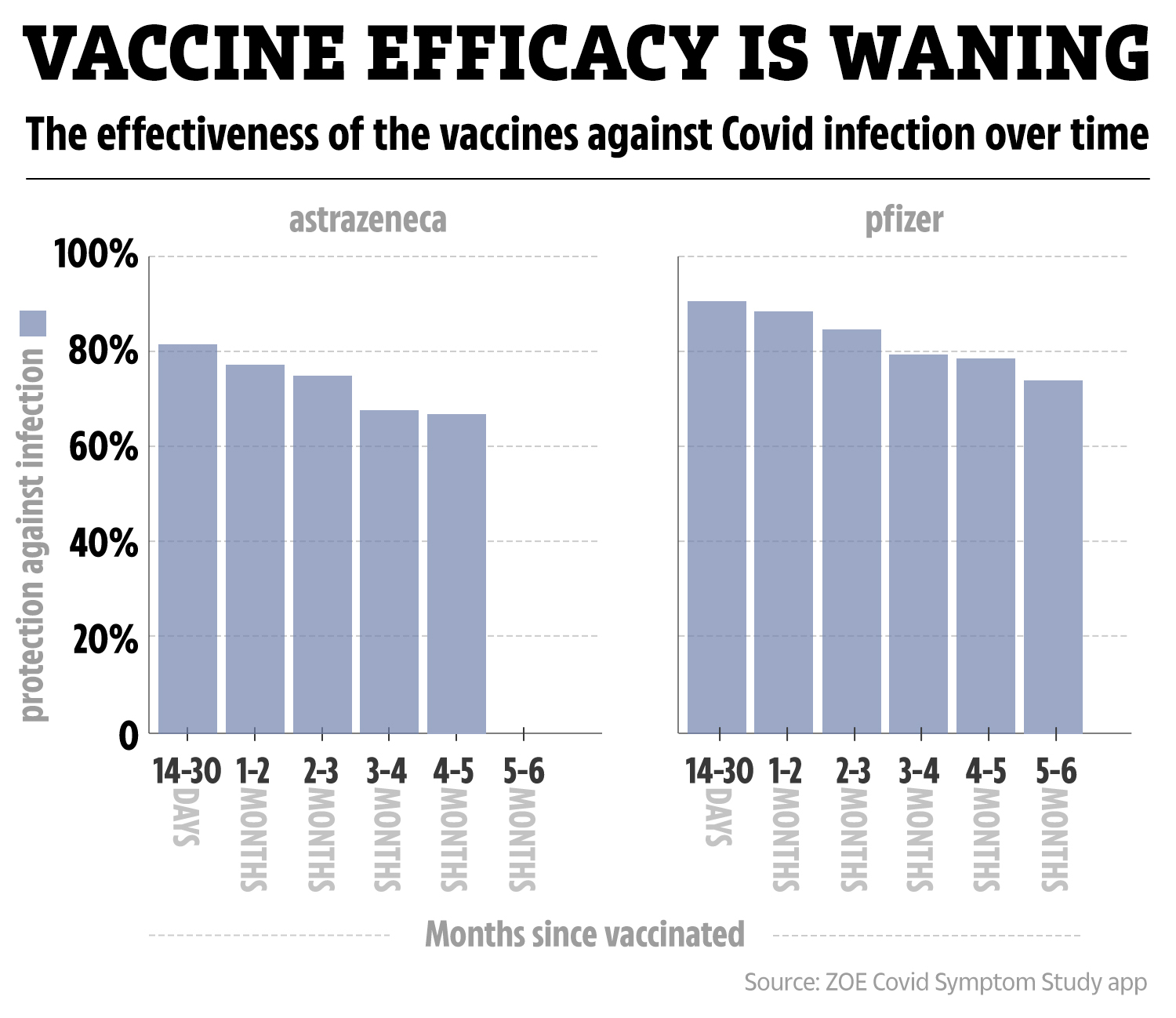 How immunity wanes over time, according to one study

Prof Preston thinks “a return to restrictions that hit economic activity” – like lockdowns – is unlikely.

But he added: “It wouldn’t be a huge surprise to see mask wearing return to mandatory in some situations.

“In short, if you unlock when there’s a lot of virus around and get rid of all mitigations, you’ll see high levels of infections. The big question is what will society find acceptable, or tolerate, as the price we’re prepared to pay for ‘freedom’.”

Around 6.5 million people in England of the 30 million in total who are advised to have a booster are eligible now.

Some 3.1 million (10 per cent of the total who need one) have been given their third shot, the NHS says.

Dr Nikki Kanani, GP and Deputy Lead for the NHS Covid-19 Vaccination Programme, said the response so far had been “fantastic”.

But experts fear it may not be fast enough to offset falling immunity in the population.

Data from the ZOE Covid Symptom Study found that after six months, protection from the Pfizer vaccine fell to 74 per cent, and the AstraZeneca jab to 67 per cent.

The lead of the study, Professor Tim Spector, told The Sun the vaccine programme was “flagging” and “not keeping up with demand for boosters and getting above 67 percent vaccinated”.

This, coupled with dropping all Covid measures in the summer, is causing the UK to have higher cases and hospitalisations than the rest of Europe, he said.

Duncan Robertson, of Warwick University, says that delays in boosting will have to be “resolved immediately” to avoid unnecessary pressures on the NHS.

“Booster vaccinations are there to prevent hospitalisations and ultimately to save lives. Delays matter,” he told The Times.

Azeem Majeed, professor of primary care at Imperial College London, said a lower uptake of third doses was “inevitable”, adding: “People were initially told that two doses were enough. They were in lockdown, and the vaccine was their ticket out of it.”

Andrew Preston, a professor of microbial pathogenesis at the University of Bath, suggested it did not matter that everyone who should get a third shot won’t get it before winter starts.

But he said “our early roll out of vaccination means immunity will wane earlier than other countries”.

He also warned the highly infectious Delta is dominating this winter, instead of Alpha.

He told The Sun: “The high infectivity of Delta means that more people will be resusceptible to infection when their immunity wanes, compared to Alpha.

“We see that in the data where vaccination protects against infection by perhaps 60 per cent compared to high 80’s for Alpha.”

Prof Preston also raised concerns of the proportion of unvaccinated people in the UK – around 15 per cent of adults have not had their first dose.

“The slow roll out of vaccination to teenagers has allowed high numbers of infections in that age group.”

Health and Social Care Secretary Sajid Javid urged “all those eligible for a top-up dose to get yours as soon as possible”.

Vaccines Minister Maggie Throup said: “Everyone eligible should not delay in getting their jab as soon as they can.” 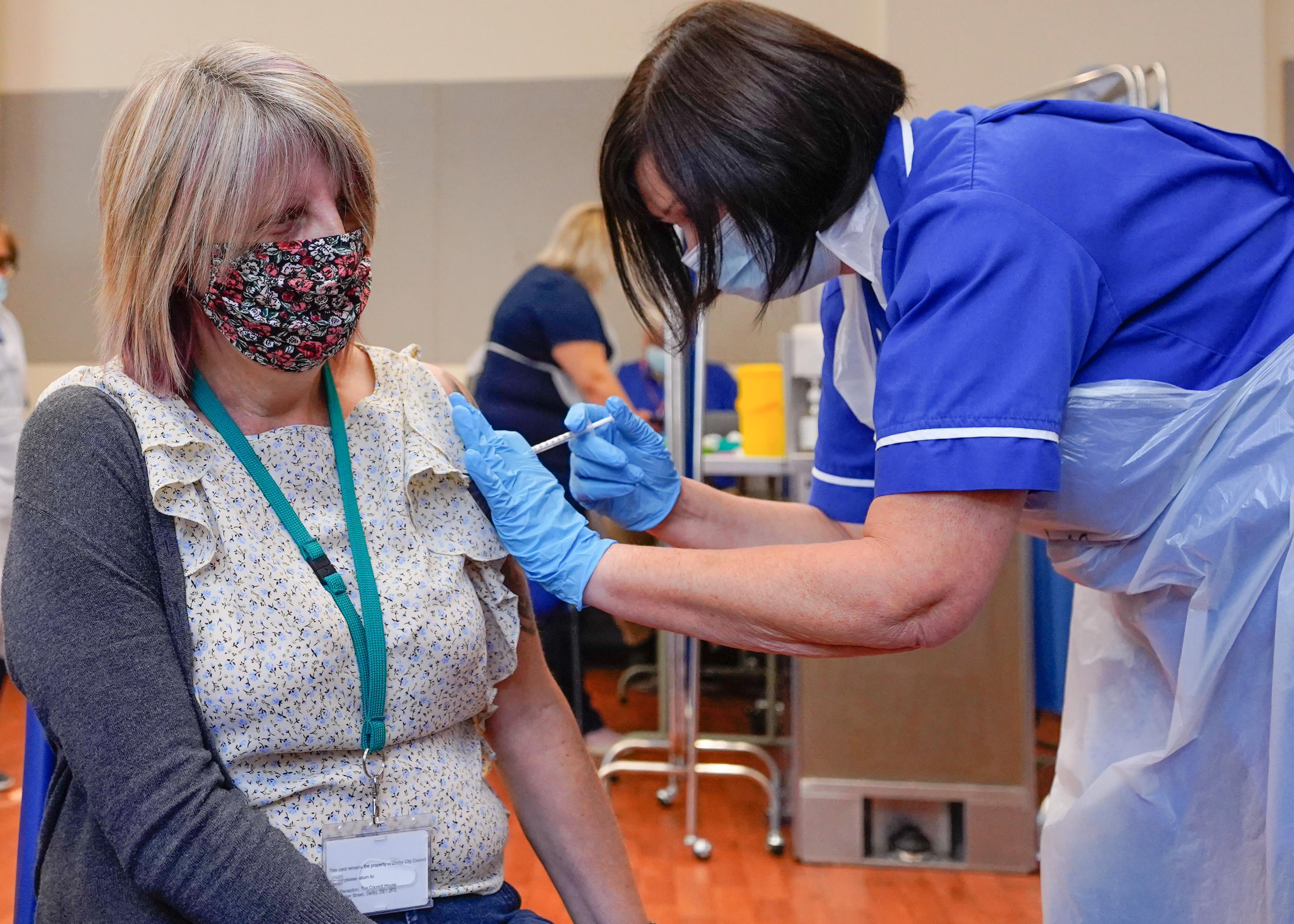 There are concerns the booster campaign is too slow. Pictured: Social worker Melody Howard receives her third shot at Midland House in DerbyCredit: LNP