First signs Pfizer vaccine could stop you carrying and spreading Covid to others, doc claims

EARLY signs show the Pfizer Covid vaccine could curb transmission of the virus, according to an expert.

An Israeli scientist said it was unlikely people who had both shots of the vaccine would carry the virus – a huge boost for cutting cases of Covid. 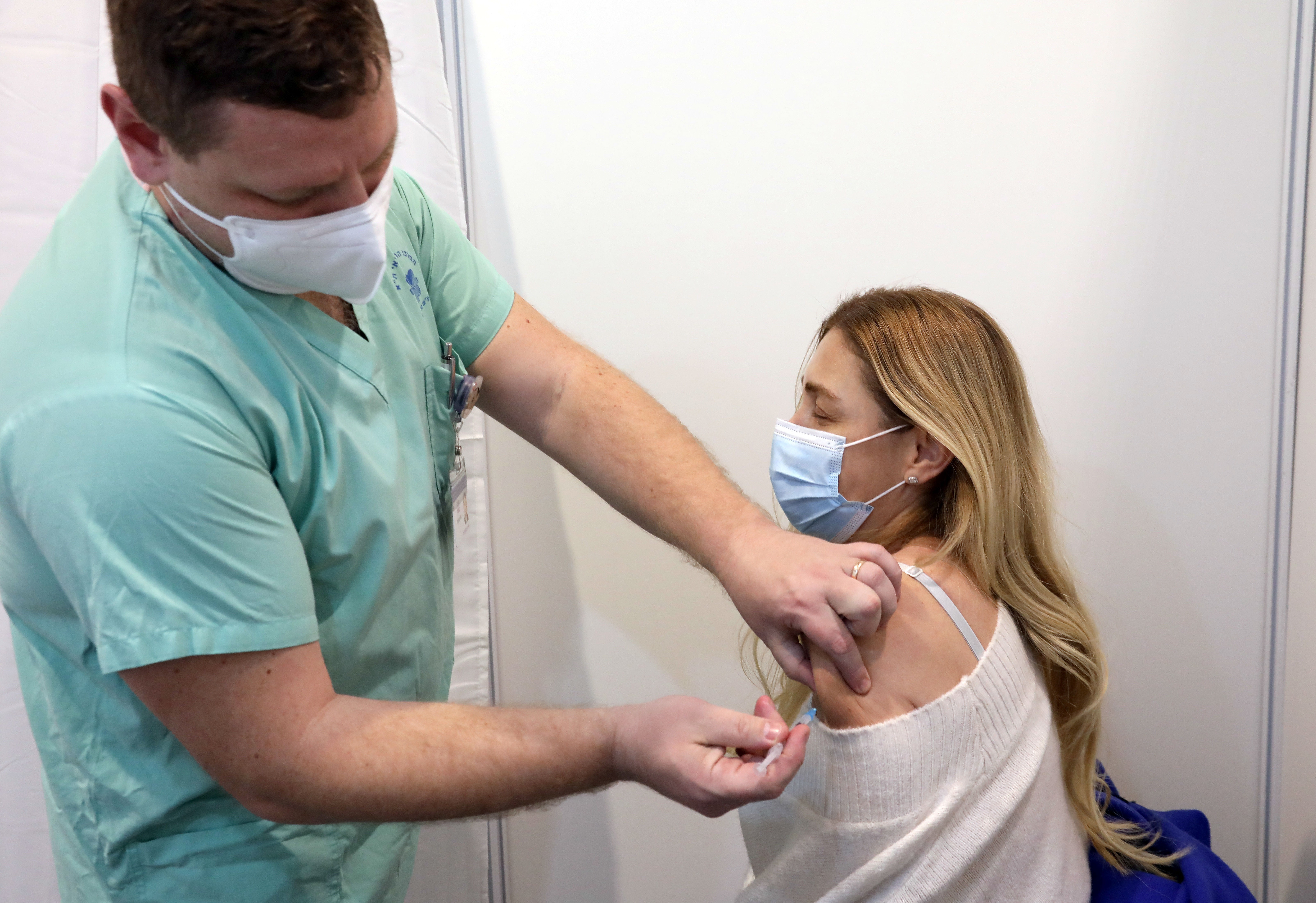 It’s not yet known if vaccines will stop the spread of the bug, but scientists across the world hope we will start to see evidence soon.

She said if vaccinated people catch Covid, they would have a lower viral load, meaning they shed fewer viral particles from their mouth and nose.

This in theory would make them less infectious.

She also said those inoculated are less like to spread it further because they have high level of antibodies.

Those who had both doses of the jab in Israel have shown a huge immune response to the jab.

Research showed people given the Pfizer Covid vaccine have up to 20 times more antibodies than Covid survivors.

Doctors looked at 102 staff members who had received both the Pfizer shots to see how many antibodies they had.

Antibodies help fight infection and are produced by the immune system in response to the virus or a vaccine.

When a person is exposed to the coronavirus, the antibodies kick into action and fight it. 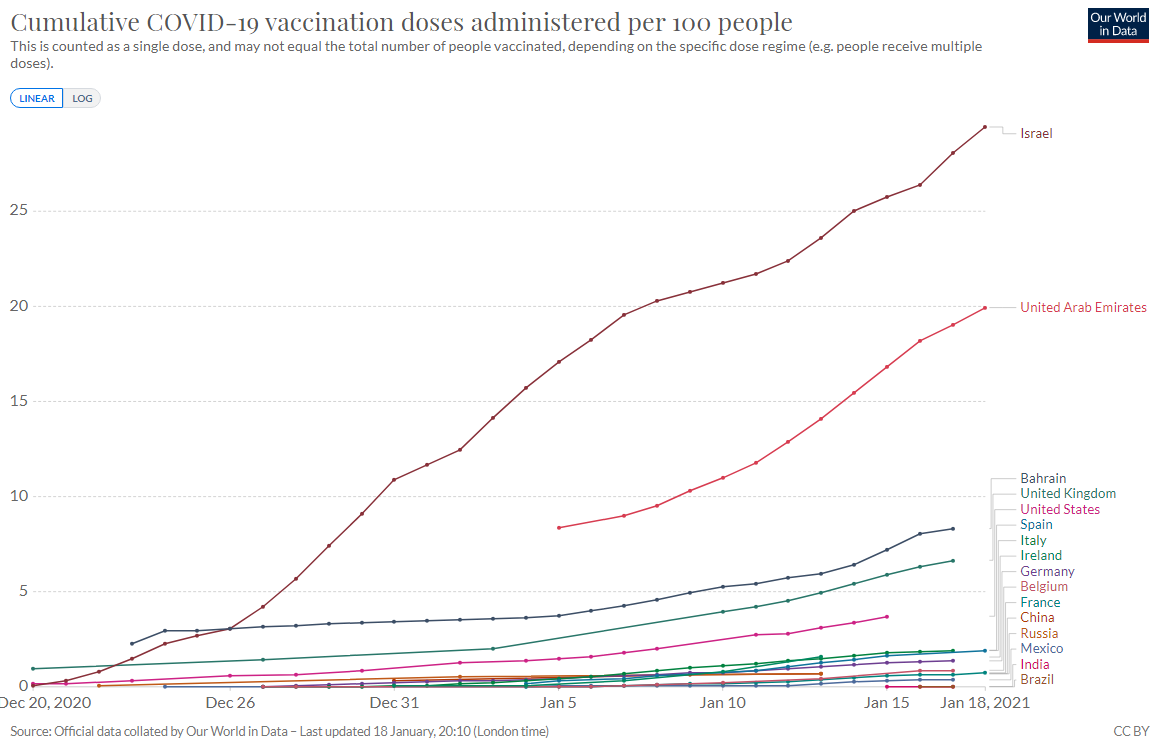 Israel has vaccinated more people per capita than anywhere else in the worldCredit: Our World in Data

The preliminary findings from Israel showed two doses of the Pfizer vaccine produced six- to 20-fold more antibodies compared with people who had recovered from severe disease.

Professor Regev-Yochay said at a briefing: “The results of the survey are in line with Pfizer’s experiment and even better than expected.

“I expect that the survey results of the other employees participating will be similar. There is certainly reason for optimism.”

Two people did not develop antibodies, including one who has a weak immune system, Prof Regev-Yochay said.

The study does not indicate how long the immunity will last or if a person who has antibodies can still carry the virus and infect others, Prof Regev-Yochay said.

One of the crucial unanswered questions is whether the vaccine will help to cut transmission, and therefore case numbers, and not only severe disease.

Trials of the Pfizer/BioNTech jab showed it was 95 per cent effective at stopping people becoming ill with Covid-19 if they get infected, after two doses are given, but could not show if it stopped people picking up and passing on the virus.

It is not clear if Prof Regev-Yochay specifically studied whether people who had the vaccine caught the virus, and if this led to more cases.

It is unlikely, given it was a short-term and small study of only 102 people.

However, Israel officials released data last week that showed Pfizer’s jab cuts infection rates in half two weeks after the first of the twin doses is given.

While Alroy-Preis told Israel’s Channel 12 News the initial data from the country’s vaccination campaign shows Pfizer’s coronavirus vaccine curbs infections by some 50 per cent 14 days after the first of two shots is administered.

Officials in the UK have said it won’t become clear for a few weeks whether the vaccine programme in the UK is helping to squash the outbreak.

Professor Stephen Powis, national medical director for the NHS in England, said: “It will stop you getting severe illness but we don’t yet know how good the vaccines are at stopping the transmission of the virus – that is data that will become apparent as more people get vaccinated.

Speaking at last night’s Downing Street briefing, Prof Powis said it would be “many weeks” before pressure on the NHS is eased as a result of the vaccines reducing hospital admissions.

The Oxford scientists who developed the AstraZeneca vaccine said their jab showed signs that it reduced spread of the virus.

The team tested people for Covid regularly to assess if people were carrying the virus, even if they showed no symptoms, findings few cases of asymptomatic Covid.

Prof Andrew Pollard, chief investigator of the Oxford trial, said in November: “If that is right, we might be able to halt the virus in its tracks and stop transmitting between people.”

Israel has jabbed more people per capita than anywhere else in the world, with one in five now vaccinated.

The Health Secretary Matt Hancock is reported to have spoken to his opposite number Yuli Edelstein in Israel to share plans for defeating the virus.

UK vaccines minister Nadhim Zahawi said: “We learned the speed at which they vaccinate — about four minutes per patient. That’s the sort of target we want.”

The latest figures show four million people have received their first vaccine dose, as the UK accelerates its efforts to reach the 15 million by mid-February target.