A JUDGE ruled that a hospital could not turn off a ventilator used to keep a Covid-19 patient alive.

Scott Quiner was originally a patient at Mercy Hospital in Coon Rapids, Minnesota before being moved to another facility in Texas over the weekend.

A judge ruled that a Minnesota hospital could not remove Scott Quiner from his ventilatorCredit: Fox 9 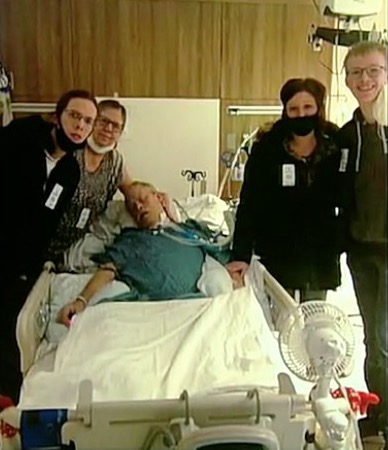 Quiner, who is unvaccinated, has been in the intensive care unit at Mercy Hospital since November 6 and has reportedly made little progress since his arrivalCredit: Fox 9

The move came after a judge issued a restraining order to stop Mercy Hospital from removing Quiner from his ventilator.

“Scott is now in a hospital in Texas getting critical care,” said Majorie Holsten, an attorney for the Quiner family.

“The doctor said Scott was the most undernourished patient he has ever seen. The last update I got was yesterday afternoon after some tests had been run; all organs are working except his lungs.”

A statement was issued by Allina Health, which operates Mercy Hospital, saying that it is grateful the family was able to find a health care facility to help with their needs.

“We continue to wish them all the best,” read the statement.

Mercy Hospital announced last week that it would disconnect the ventilator after Quiner, who is unvaccinated, had shown little signs of improvement since his arrival at the intensive care unit on November 6.

Quiner’s case drew much attention and his wife, Anne, went to court to seek an emergency restraining order to stop the hospital from pulling the plug.

In her petition to the court, Anne wrote that without a judge’s decision, “my husband will die.”

“This is a life-saving thing,” said Holsten. “It is going to be critical.”

The family has said pubically that the hospital would not treat Quiner with certain drugs, nor would they try other measures to save his life

Anoka County Judge Jennifer Stanfield ruled in favor of Anne Quiner and a hearing will be held virtually on February 11.

After Quiner was transferred to Texas, he has apparently begun to improve while still on his ventilator and has been provided extra nutrients.

“I think the world is watching what is going on with Scott,” said Holsten. “And as he gets better and better, we are going to see that you know what, there are protocols that should be used that hospitals have not been using.”

Holsten said she hopes that changes are going to be made as a result of the case.

Quiner’s wife sought an emergency restraining order to stop the hospital from pulling the plugCredit: Fox 9

Allina Health, which operates, Mercy Hospital in Coon Rapids, Minnesota issued a statement saying they are grateful that Quiner is receiving the help that meets his needsCredit: Fox 9

Ditch the snooze button and make a healthier morning routine (Picture: Getty/Metro.co.uk)I’ll be the first to admit that I have...

Can a ‘fake commute’ help productivity when working from home?