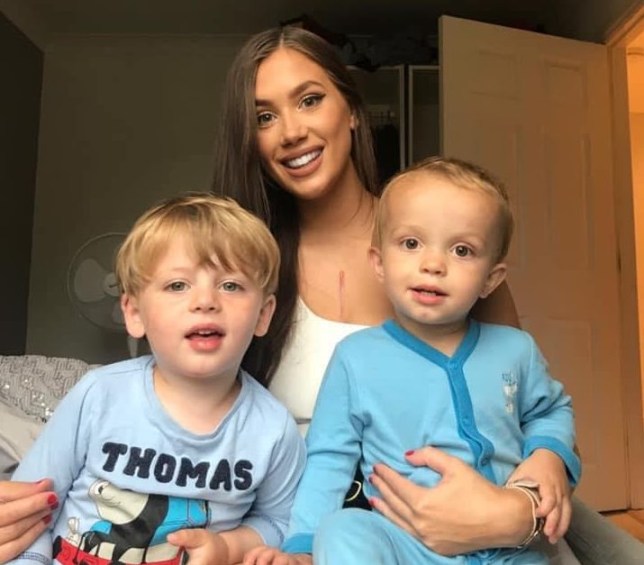 I was terrified of the risks involved but, if left untreated, the clots would kill me eventually (Picture: Klara Bacon/Medavia)

I was thrilled when I discovered I was pregnant again.

My eldest, Leo, three, had arrived without complications. In fact, my labour lasted only one hour so I was convinced I’d have another speedy birth with my second.

Pregnancy went smoothly until, reaching 37 weeks in August 2018, I was booked to be induced. After labour began, I saw docs exchanging concerned looks.

It turned out, my unborn baby’s lungs had not developed fully and his heart rate was dropping. Plus, my oxygen levels were dangerously low.

Terrified for my baby’s safety, I didn’t have a thought for myself, only for his survival. But this was only the beginning of the difficulties my boy and I were about to go through.

They prepared for an emergency C-Section, only, like his big brother, he wasn’t prepared to wait. With no pain relief, Arthur arrived at 9.13am on 10 August.

It was incredibly traumatic as he was placed on my chest for only a few moments of skin-to-skin before being instantly whisked to NICU – I couldn’t even hold him properly – but doctors explained they had to act fast to aid his breathing.

Instantly, they turned their attention to me. I’d barely registered that my oxygen levels were critically low, and I was taken for an X-ray and CT scan that revealed two huge blood clots in my lungs.

The midwives had missed the warning signs, despite my low oxygen levels, one doctor admitted gravely.

‘Will I be OK?’ I pleaded, but medics could not reassure me, replying only to say that they were doing all they could.

A dreadful feeling washed over me. Although docs advised me not to, I Googled it and was devastated to read that pulmonary embolism (PE) – blood clot on the lung – is the leading cause of maternal death in the UK with as many as one in three PEs proving fatal.

Arthur was kept in NICU – I was petrified I would die before I met him – as docs gave me warfarin (blood thinner) and injections to try and dissolve the clot naturally.

Thankfully, they confirmed that Arthur was doing well and, the next morning, I was able to cuddle him for the first time. It was pure magic.

But my joy was overshadowed by fear of what was happening in my lungs but the doctors told me the clots were treatable.

Only, the meds they gave didn’t work. After six days, as Arthur was fit and well, we were both discharged while the experts figured out next steps for my clots.

I had shortness of breath, so I bought a pulse oximeter to track my oxygen levels, and became obsessed with monitoring the ticking time bomb in my chest.

The strain on my heart was immense, one doctor explained that the clot could be likened to someone holding a thumb over the end of a hose pipe; the oxygenated blood couldn’t get past the clots properly while pressure built behind them.

By July 2019, I had to go to A&E. I had fluid in my lungs – pneumonia too – and spent a week in intensive care on high flow oxygen; so breathless even talking was an effort.

At hospital, my lungs glowed white on a CT scan as doctors – another clot had developed – and docs realised the clots had calcified, which essentially means they’d hardened and would be more difficult to clear. I underwent a raft of treatments but they just wouldn’t budge.

As a result of the PE, I was eventually diagnosed with chronic thromboembolic pulmonary hypertension (CTEPH), which was a very rare development for a 23-year-old like me.

That August, it was decided I needed a dangerous operation called a pulmonary thromboendarterectomy but there was a six month waiting list.

The complex and highly-skilled surgery had only been performed 2000 times in the UK, it was high risk – there’s a 4% mortality rate, meaning one in every 25 people don’t survive the operation.

It involved specialists lowering my heart rate and keeping my brain at 20 degrees for 20 minutes, and this would be repeated for each lung.

My jaw dropped as they explained that surgeons would drain all the blood from my system, allowing them to suck the clots from my lungs before bringing me back to life.

Essentially, they would have to kill me to save me.

I was terrified of the risks involved but, if left untreated, the clots would kill me eventually. I had to take the chance – I had to survive for my boys.

In February 2020, the night before the pioneering surgery at Royal Papworth Hospital, I made video messages for Leo and Arthur in case I didn’t make it. I fought back tears as I told them how proud I am to be their mummy.

I kissed the boys goodbye, fearful I’d never see them again, but determined to be brave for them.

Thankfully, I’ve no recollection of the surgery – only waking to see my brother, George, grinning at me.

The operation was a success but I had a long road ahead; I’d been so focused on the worry of the op I hadn’t considered how painful recovery would be. 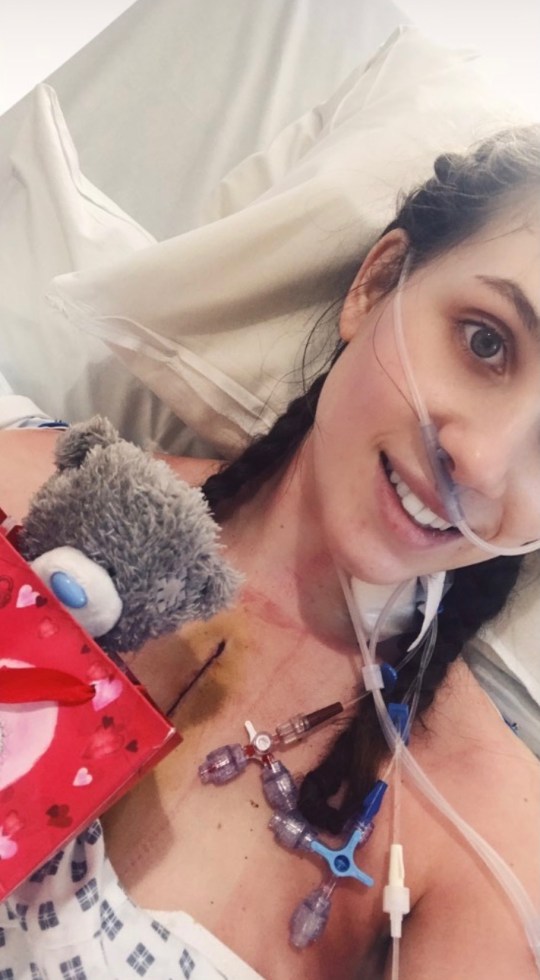 Looking back at pictures, I look like a zombie with deathly pale skin and tubes sticking out of me (Picture: Klara Bacon/Medavia)

My chest had been sliced from top to bottom, my rib cage cut open… as I had been ‘dead’ it was little wonder I had zero energy!

Looking back at pictures, I look like a zombie with deathly pale skin and tubes sticking out of me.

Still, it was all worth it to know the clots were gone. I was expected to be in hospital three weeks but, just one week later, I impressed the medics so much that I was discharged.

Seeing Leo and Arthur for the first time gave me strength but it was tough as I couldn’t hug them. They were wary at first but soon accepted they had to be gentle with ‘Mummy’s scar’. I don’t even notice it now, it’s a badge of survival and I’m proud to wear it.

It’s been hard juggling recovery and caring for my sons during lockdown. Especially as I couldn’t do any lifting for four to six months, but my ex was great with the boys, and my mum, dad, my brother and my new boyfriend, Steve, all helped too.

Since the restrictions came in just after my operation, I’ve had to shield and be very careful not to pick up anything that will affect my lungs – it’s been a tough year.

Why I clot is still a mystery. Docs have done every test but nothing proves why – they even said it was likely not caused by pregnancy but was discovered as a result. They admitted fault that I wasn’t checked for blood clots prior to labour but I didn’t pursue a complaint as ultimately it was the NHS that saved my life.

I’ve learned more about the procedure since having it done – I’ve a morbid fascination with it – and I’m staggered that I was lying drained of blood on a surgeon’s table for 40 minutes.

I’m not completely out of the woods yet, a new clot has formed on my left lung but docs are confident they can get to it via my arm – a much less invasive procedure to ‘explode’ it.

Although I’m anxious about my health in a way that I never used to be, I’m extra grateful for all the little moments I’m sharing with my boys.

I’ll take blood thinners for the rest of my life, but it’s a small price to pay to watch my boys grow up.