It felt like a devastating blow for others to reject me so publicly (Picture: Glen McCarty)

You know when you walk into a room and it feels like everyone’s looking at you and whispering?

That’s what every space felt like after I told a friend at circus school in March 2014 that I’d been recently diagnosed with HIV. I mistakenly thought I could trust them to keep it secret, but I was wrong.

I first started my circus training the previous September and was diagnosed a few days into the new year.

At first, it sent me into a bit of a mental hole and I turned to drugs to cope. Partying helped me pretend I was happy and having fun – even though I wasn’t. I desperately wanted to feel good again and was looking in all the wrong places.

Then one day, I couldn’t keep my secret inside anymore and needed to get it off my chest. It was during a cigarette break with a friend in my course that I first said the words ‘I’m HIV positive’ out loud.

I hadn’t known the guy for long and hadn’t planned it beforehand, but he was comforting and supportive. He listened to what I had to say and I felt better having told someone else.

But in no time at all, everyone was treating me differently and keeping their distance. Except one – my friend Tessa, who I’ll love forever – who sat me down privately and let me know why everything felt so strange and what people were talking about. 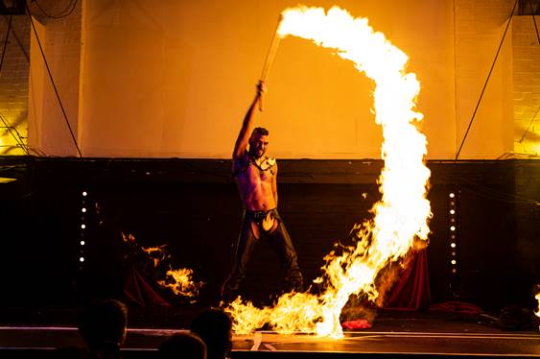 Everyone was treating me differently and keeping their distance (Picture: Jesse Olu Ogunbanjo/Little Gay Brother)

My secret was out and the other students were worried about working with me due to my HIV. Because, while working on the pole or trapeze, the reality is that we get bruised, battered and we bleed.

No one came to me and outright said ‘I don’t want to work with you because I’m scared of getting HIV’ though. It just became very clear after regular performing partners suddenly really wanted to work with others. People would whisper about me but not with me.

This was really damaging because I was still struggling at the time to accept my diagnosis and it felt like a devastating blow for others to reject me so publicly.

Around the same time, I was still learning about HIV and I quickly discovered through talking to my doctors that the daily medication I was taking would soon mean I couldn’t pass on HIV to sexual partners – never mind performing ones.

So I knew I had a choice: quit the course and give up on my dream of performing professionally, or face the problem head on.

It had already taken me years to find what I really wanted to do. In my early 20s, it was all a bit aimless. I worked in restaurants and shops, and for a while I was a youth worker.

I had lots of jobs but not a lot of purpose. Then after one particular redundancy I did a summer course in circus skills and everything changed. 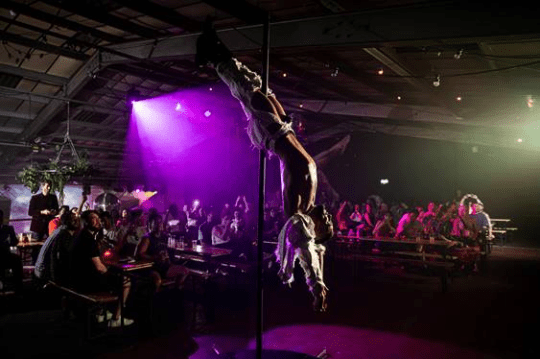 I may be many things, but I’m not a quitter (Picture: Jesse Olu Ogunbanjo/Little Gay Brother)

I grew up in a Muslim family on a council estate in Edinburgh and performing wasn’t ever an option. Music and dancing were considered taboo. But, as soon as I started expressing myself using my body, it felt 100% right.

I may be many things, but I’m not a quitter. So I called a meeting of all 30 of the students in my year. It was scary and weird – and hard when you’re in your early 20s – but it was one of the most important things I’ve ever done.

We sat in the library with my principal and heads of department and laid it all bare. I said I had recently been diagnosed with HIV and I knew many of them considered me a risk. I said I didn’t have all the answers yet, but that I wanted them to ask questions to me directly rather than whispering behind my back.

It became apparent that most of my classmates’ perceptions of HIV were stuck back in the 80s or 90s. With hypotheticals and what ifs that had never happened before and have never happened since.

And it wasn’t a magic meeting where everything changed, it all took some time. Months later, another friend freaked out on a night out after sharing a cigarette with me. She’d had a few drinks – which probably didn’t help – but I was able to tell her that you cannot get HIV from sharing a cigarette, from hugs or from kissing.

By the end of the three years of my degree, we got there. Those students I worked alongside are now all massive allies and the school continues to educate its students on HIV. I even went back to deliver a lecture to the most recent cohort.

At first though, when someone asked me a question I didn’t know the answer to I took them to my HIV clinician and then went back to them with the information they needed to feel reassured. They educated themselves alongside me. 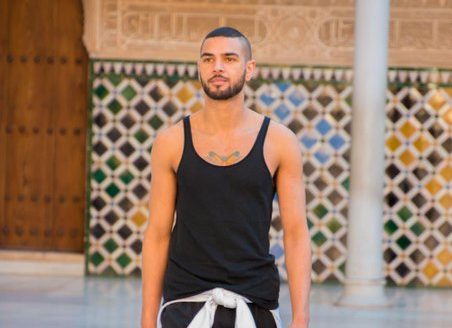 We learnt about viral loads (which is the measurement of the amount of HIV in the blood) and the history of the epidemic alongside juggling and back flips.

The school and I even created new blood borne virus (BBV) policies, which are used nationally within our circus sector today. These clearly set out the universal precautions to be taken in the circus to protect everyone.

One day that really sticks in my mind is when I cut myself during a performance and I was spinning in the air. I covered the entire performance area with my blood – metres and metres of space covered in my blood.

This time though, the exact same students who were so scared before didn’t even think about helping to clean it – and me – up. I vividly remember sitting there with a big cut on my arm afterwards and being so happy.

After the journey that we’d been on together, they had learned enough to not be scared of me and to help me when I needed it.

That’s why I continue to share my story loudly and proudly: I’m Sadiq, I’m a circus performer and I’m HIV positive. I want to get as many people as possible on board as HIV allies through education – because it’s usually misplaced fear about HIV transmission that causes most of the problems.

It’s also why I’m proud to be part of Terrence Higgins Trust’s new campaign, which helps celebrate the achievements of HIV positive people like me. It spotlights the lives of people living with HIV because in decades gone by, we wouldn’t be around to tell our stories – depriving the world of our talents and our company. 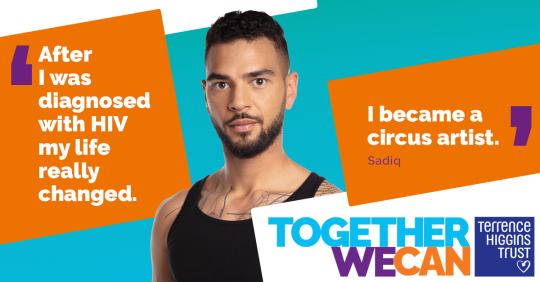 Every day I perform is another day I show what a HIV positive body is capable of (Picture: Glen McCarty)

It’s not about saying a HIV diagnosis is easy, but showing you can still fulfil your dreams. We’re pilots and radio presenters, mums and dads, nurses and circus performers.

If it weren’t for the advancements that organisations like them have made happen, I know I wouldn’t be alive today.

My little group at circus school was a microcosm that shows the power of sharing information about HIV. We need to keep reaching more and more people with the facts about how much things have changed in the last 40 years. I have a normal life expectancy, I can have kids who won’t have HIV, and I can have the type of sex I want – safe in the knowledge that I can’t pass HIV on.

Life since my diagnosis hasn’t been all plain sailing – and I still have my moments – but HIV hasn’t stopped me from fulfilling any of my dreams, and it’s even fuelled some of them.

When I was first diagnosed, I felt like I had lost control of my body and my physical training helped me to regain that control. I also want to show that HIV isn’t debilitating and isn’t holding me back.

The last 18 months have been challenging for all performers thanks to Covid-19. But I never thought about packing it in and giving up because I’m doing what I love to do and now I’m finally back performing every Friday and Saturday night.

Every day I perform is another day I show what a HIV positive body is capable of.