‘I spent tens of thousands of hours analysing crypto for six years,’ Steven, a recovering cryptocurrency addict, tells Metro.co.uk. ‘I lost my grasp of reality.

Steven is a patient at Castle Craig, a rehab centre in Scotland that deals with all kinds of addictions, as well as grief issues, unresolved trauma, eating disorders and self harm.

Over the past six years, it has seen more than 100 people with dangerous cryptocurrency problems.

‘That’s not to say that each and every one has been addicted to crypto,’ explains Anthony Marini, a senior specialist therapist at the centre. ‘But certainly a lot of them have had the mental obsession with cryptocurrencies.’

Anthony believes this is a trend that will continue to grow.

‘Every single time you invest or trade in cryptocurrency, you’re actually gambling,’ he explains.

‘It doesn’t look real and people think they are trading, not betting. A lot more people are betting through the internet because it doesn’t feel like real money.’

‘There’s a difference in your mind straight away – you think: “I’m investing money, I’m not gambling”.’

Anthony stresses that one of the biggest issues with cryptocurrencies, such as Bitcoin, is the lack of regulation – something that encourages addictive behaviours.

He tells us: ‘With it not being regulated more and more criminal activity is happening on it, so more platforms are opening up, taking people’s money and then closing down – and nobody can do anything about it.

‘If you think about what cryptocurrencies are, it’s basically numbers on a screen – so the more people that invest in cryptos, the more it’s going to go up.

‘Let’s say I had a spare £1million and I bought £1million from a certain crypto. That crypto is going to go up.

‘Now say it goes up 10% within that week. That person who has taken £1 million – they are now taking out £1.1million after a week. Obviously that crypto is going to go down – and that one person has made quite a bit of money.

Steven came to Castle Craig for treatment for gambling and crypto addiction, after losing everything and having suicidal thoughts.

‘Castle Craig has taught me very specifically that the addiction to this modern technological gambling that’s available 24/7 and 365 days of the year, is all-consuming and so dangerous,’ he says. 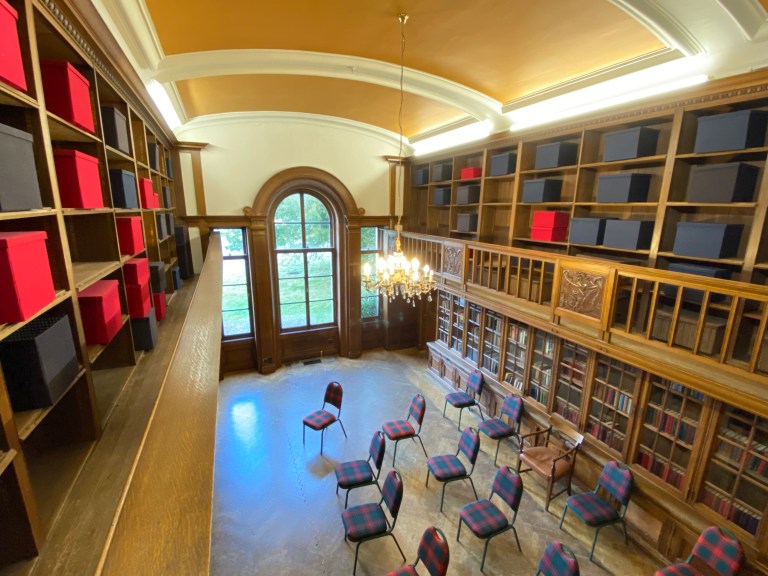 The 50-year-old initially became obsessed with analysing the stock market back in 2009, and started making money after reading various books.

But this obsession with logic and analysis slowly grew.

Over the course of the next few years, Steven established a career as a tunnel miner, earning around £85,000 a year. But during this time, his obsession escalated and he started to lose huge sums of money.

‘One day, I started splitting money into all these different accounts,’ he reveals. ‘I couldn’t manage it. I couldn’t keep up with it.

‘My obsessive, gambling mind had lost the logic and good analysis.’

On one occasion he lost £10,000 in a single hour – an event that triggered other addictions to flourish.

He remembers: ‘It wasn’t long after that sharp loss that my illness of addiction took me back onto substances, beyond alcohol.

‘My illness of addiction took a massive leap – the pain and the shame of losing that money from a working class background.

‘The addiction was escalating just out of control, I was powerless.’ 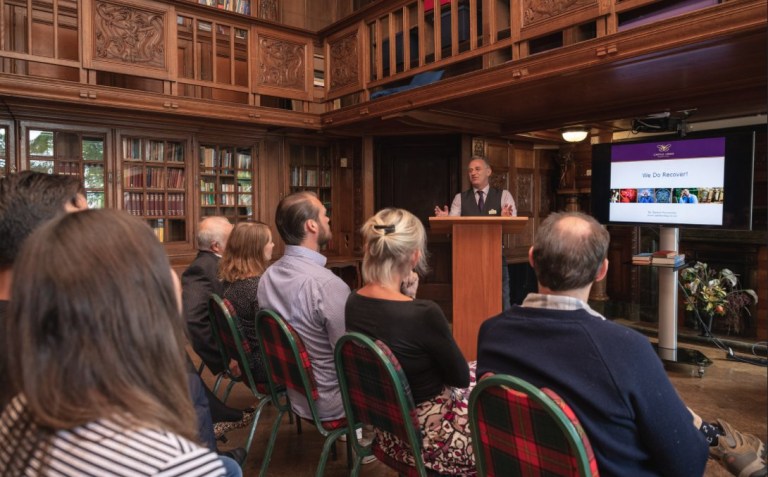 Anthony has seen more than 100 people with dangerous cryptocurrency problems over the past six years (Picture: Castle Craig)

In 2014, Steven had to resign from his job as he was unfit to work.

The following year, he moved into the world of cryptocurrencies – specifically tracking, buying and hiding Bitcoin.

He continues: ‘I was buying Bitcoin for the principal purpose of using the Dark Web to get substances.

‘I was spending more than a 100 hours a week consumed by continuously watching Bitcoin. In 2019/2020 I started looking at other cryptocurrencies – but none of them really tickled my fancy as much as Bitcoin.

‘It was almost as if Bitcoin became my child and my baby: I would nurture it and encourage it, I would talk to it, I would build these charts, I would trade it and buy it and short sell.

‘I thought I became this wizard, as I started seeing patterns. My insanity as a compulsive gambler was obvious to my family, but not to me.’

After trying to get into Castle Craig for a long time, eventually, through the help of his loved ones, Steven was admitted in 2021 – something he says has saved his life. 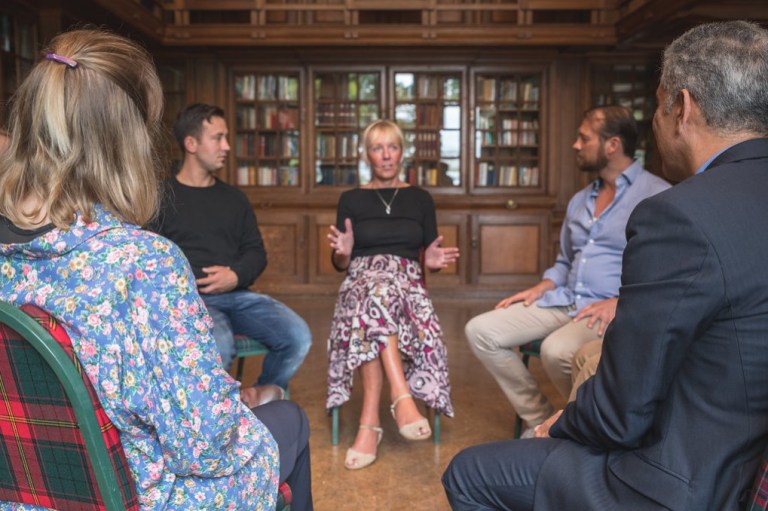 Signs of a gambling or cryptocurrency addiction:

‘I’m starting to love myself and being encouraged and inspired by the person who is underneath the illness.

‘I have also been seeing a psychiatrist and I’m closer to a diagnosis for a disorder from childhood, and I am so relieved as I’ve always known something else was going on with my brain – apart from addiction.

‘It’s almost like a magical experience to come to Castle Craig, and to see patients come in of all walks of life and all ages, women and men broken, and within days you see people healing and getting repaired psychologically, mentally and physically.

‘It’s not just a detox, it’s just this all-encompassing place with recovery at heart.’ 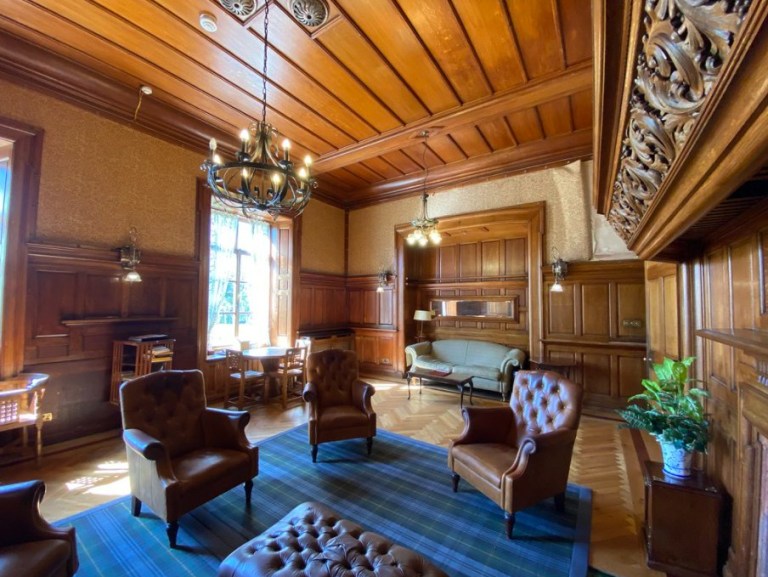 Castle Craig is staffed with a consultant psychiatrist, 24-hour nursing staff and a GP, as well a large team of therapists who have a variety of skills and qualifications, in order to meet every patient’s needs.

A typical day at the rehab centre involves waking up around 7am for meditation before breakfast, then a psycho-educational lecture about addiction before a group therapy session. Then a short period before lunch allows for a gym session, and after lunch, patients have one-to-one therapy, followed by specialist workshops. 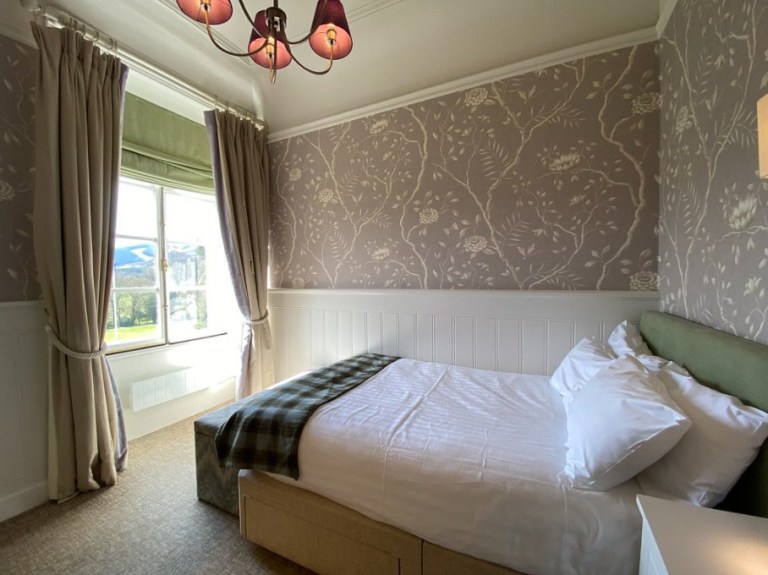 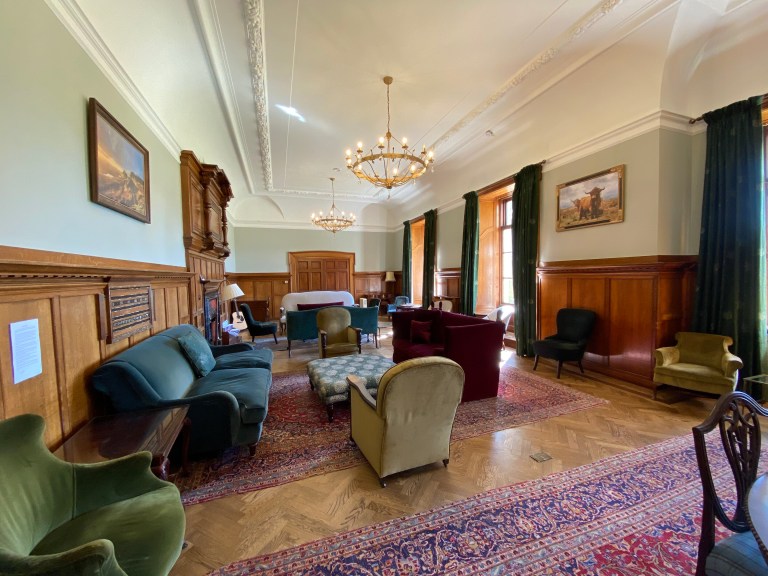 The centre offers a number of different therapies for patients (Picture: Castle Craig)

Over the past few months, Steven has been working with Anthony Marini through a 12-step programme to help with gambling and crypto addiction.

Steven hopes more education around the dangers of cryptocurrency will follow.

‘I fear for the future of many many young kids with mobile phones and laptop who suddenly have one win,’ he adds.

‘I think young people need to educate themselves specifically on how they can lose everything in a moment if they put all their hard-earned pennies into any cryptocurrency at all.’

Steven adds that he’s learnt so much about himself at Castle Craig and finally has hope for the future – something he previously lost.

‘As a gambler, and as an addict, I will never ever win,’ he adds.