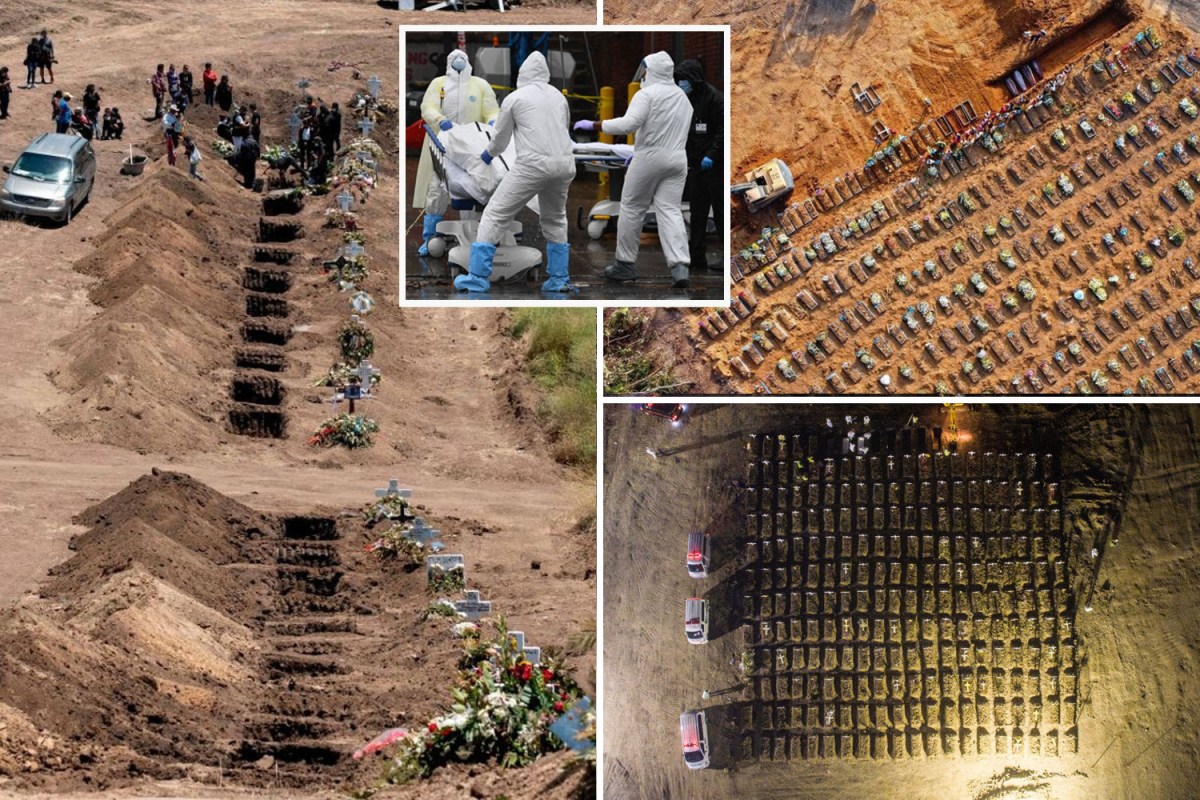 WEARING hazmat suits and protective masks, gravediggers get to work, clearing plots for the scores of dead that will inevitably arrive as the pandemic continues to grip the world.

In pre-Covid times, they would be digging 6ft holes – but as space is such a premium, they need to dredge up existing bodies and empty old tombs of skeletons to make way for new corpses.

Graveyards have been reaching capacity for decades but with Covid deaths topping four million across the world, the problem has escalated.

Earlier this week it was revealed that the Butovskoye cemetery in Moscow was running out of space after Russia was suffering a huge number of deaths due to the failure of the country’s vaccination campaign.

Last week it confirmed record numbers of fatalities and those working in crematoriums have complained they’re struggling to cope with the demand for plots, often stacking dozens of coffins on top of each other. 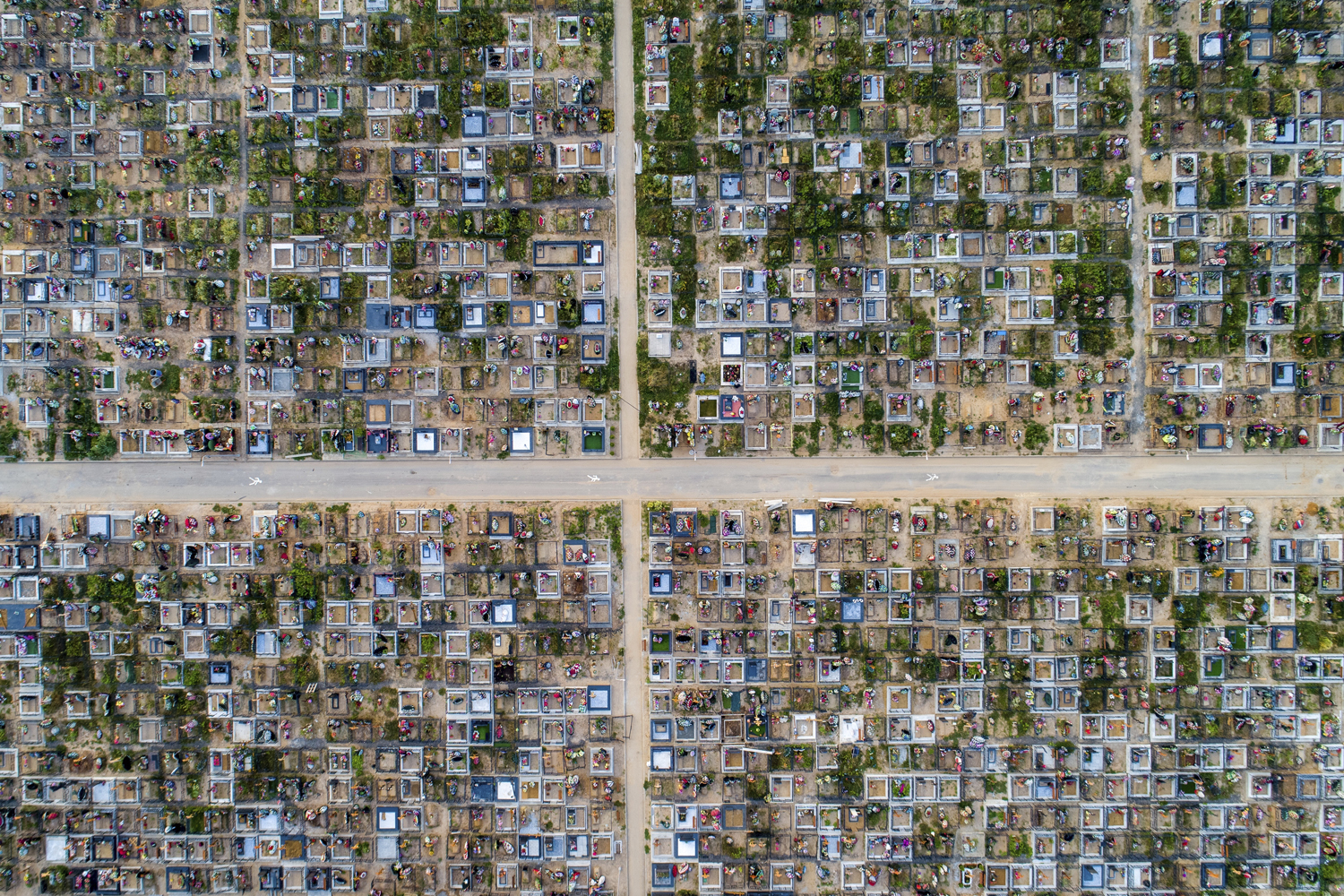 Fresh graves at the Butovskoye cemetery, outside Moscow, RussiaCredit: AP

Here, we take a closer look at some of the cemeteries affected, and how the pandemic has exacerbated the issue around the globe.

The country has been one of the worst affected by the virus, with over 500,000 deaths to date.

As a result, they were forced to carry out the mass exhumation of 1,000 skeletons in older tombs to make room for more dead bodies.

The cemetery also had to resort to late-night burials, working around the clock to keep up with demand. 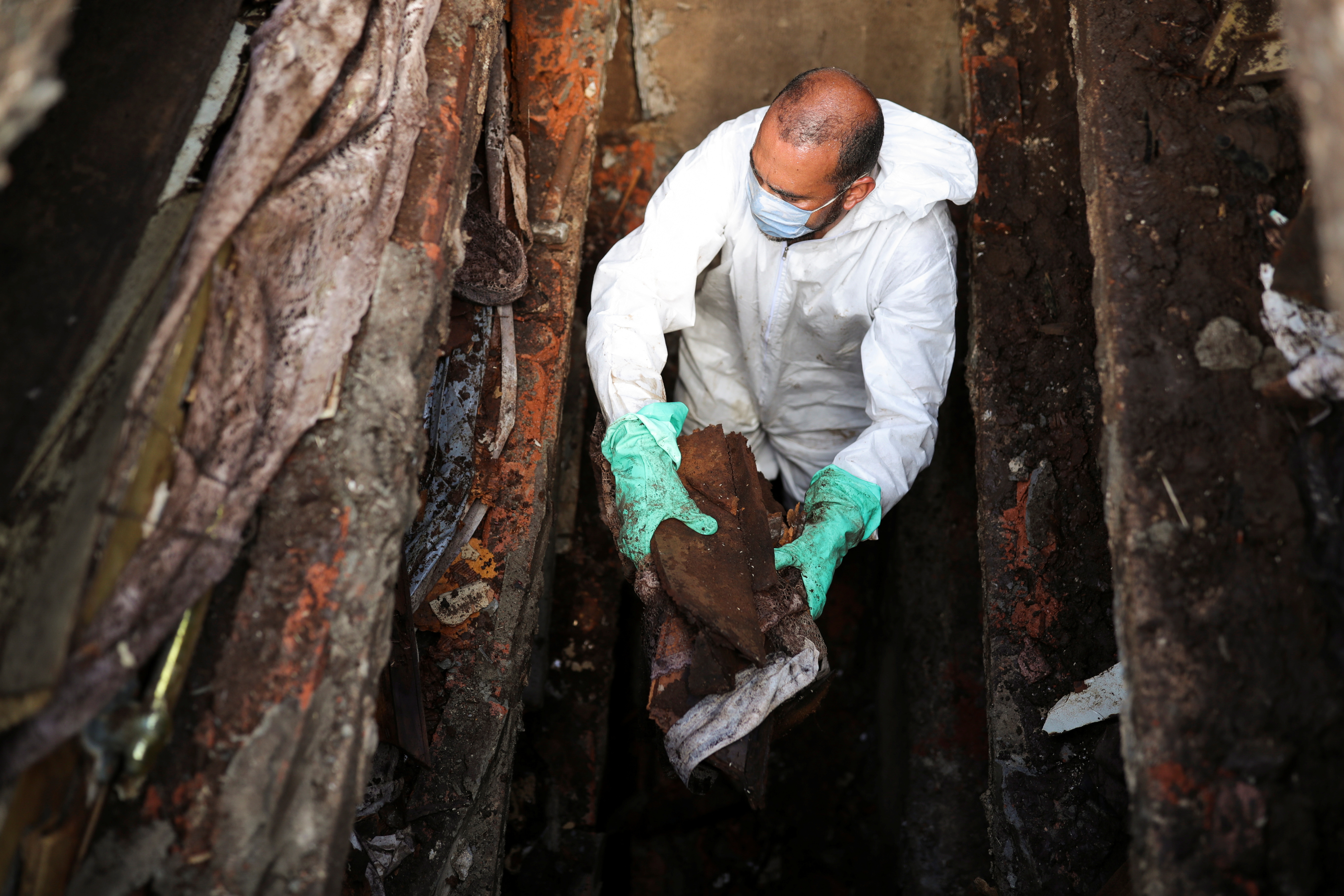 Mass graves, known as “trincheiras” – translated as “trenches” – were dug last year in the biggest graveyard in Manaus, also in Brazil.

Maintenance man Gilson de Freitas, whose mother was buried there along with 20 other coffins told The Guardian: “It’s madness – just madness. 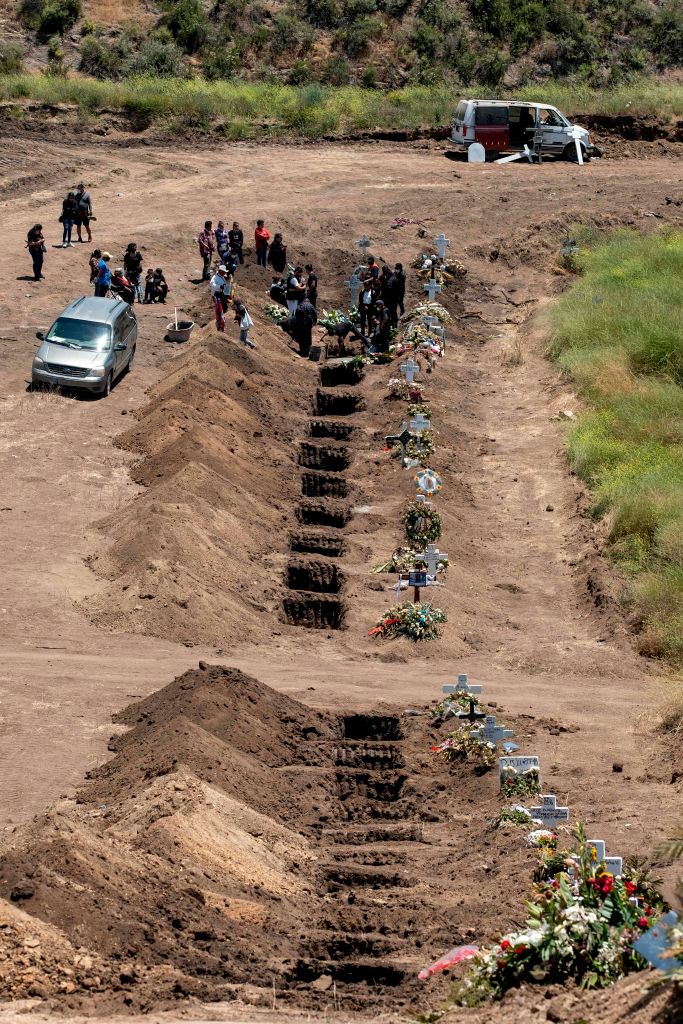 Graves all over the world, including this on in Tijuana, Mexico, have struggled with the fall-out from the pandemic.Credit: AFP 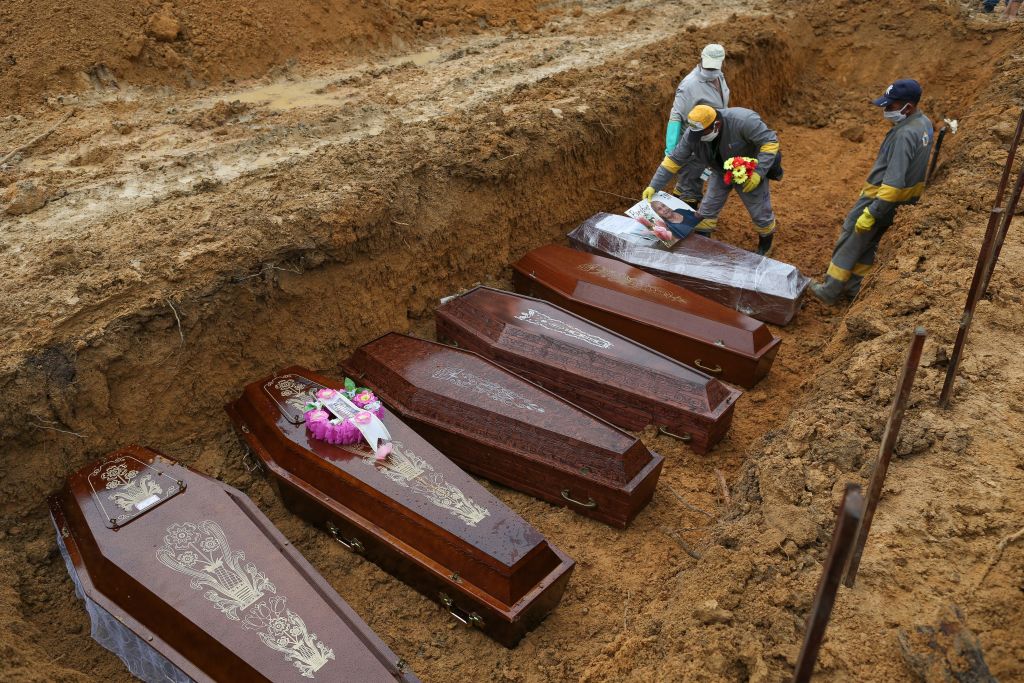 Mass graves were dug at the Nossa Sehhora cemetery in Manaus, BrazilCredit: AFP

Bodies decomposing on the street

At the height of the pandemic last year, bodies were piling up in the streets of Ecuador city, Guayaquil.

With the health systems struggling to cope, there weren’t enough resources to collect the dead, and with the soaring temperatures in the city, the rate of decomposition was a real issue.

Families and friends were forced to leave bodies on the streets and the problem became so severe officials began distributing cardboard coffins last year. 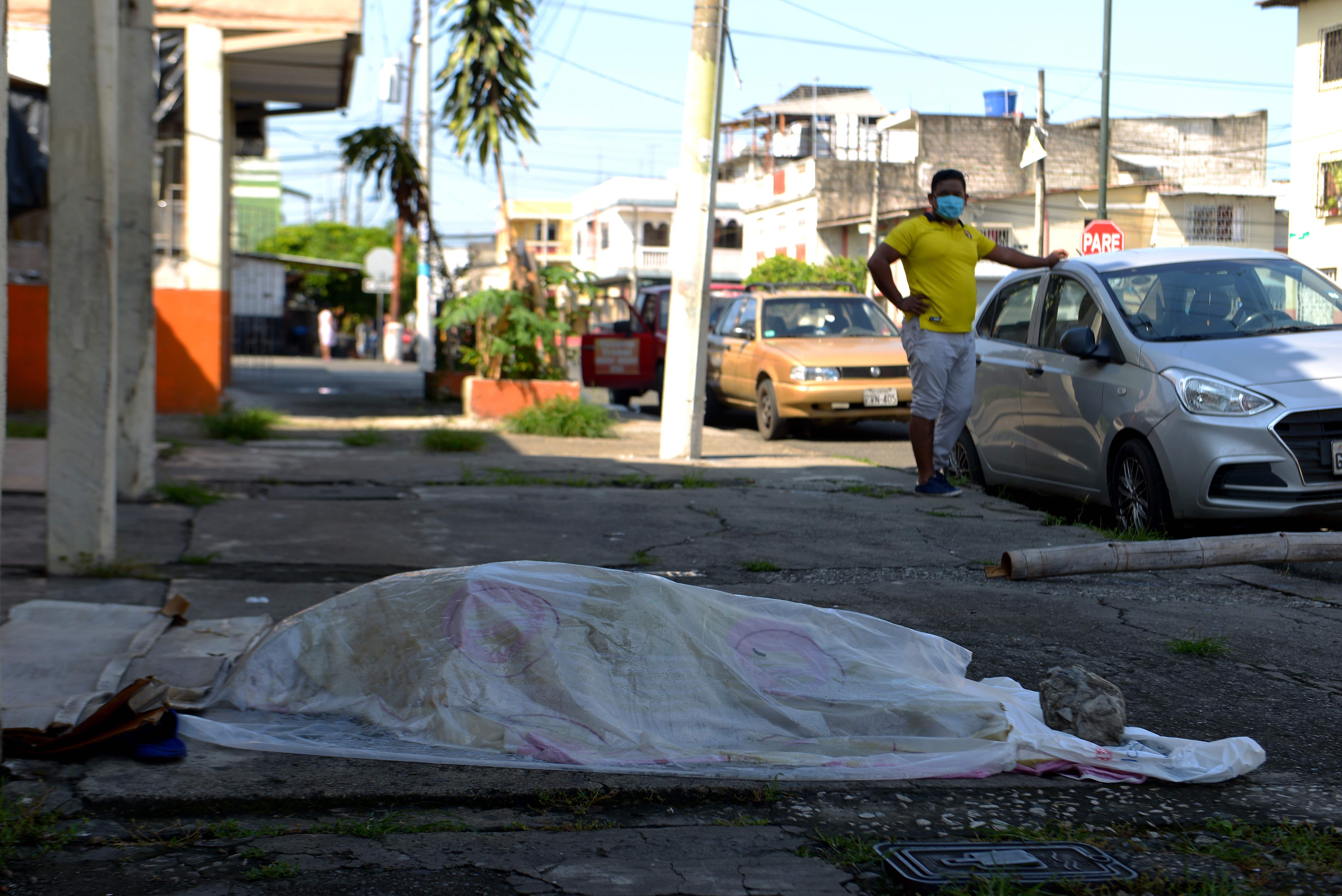 Bodies were left on the street as the city struggled to deal with the growing numbers of deathsCredit: AFP

At the beginning of the pandemic, experts warned Britain could also see a need for mass graves if local services became overwhelmed.

Temporary mortuaries were constructed, and at one point body bags even ran out.

Two mass plots known as ‘saff graves’ for up to ten bodies, ten metres long and two metres wide, were even dug at a Muslim cemetery near Chislehurst, south east London, to accommodate Islamic burials, which traditionally happen within 24 hours of death.

The method involves burying people in individual chambers within one plot, and was used as there was a real concern that gravediggers couldn’t keep on top of the sheer number of graves that needed to be dug.

A temporary mortuary with capacity for 672 bodies was prepared in Hillingdon, North London, and bodies were stored in temporary marquees in Kent, Surrey and Lincolnshire.

The Islamic graveyard of Jadid Qabristan, on the outskirts of Delhi, is India’s largest and oldest – and earlier this year, it finally reached capacity.

It meant the site had to turn bodies away, with head gravedigger Mohammad Shameem telling Sky News: “Yesterday there were 19 bodies, but we can only handle 15.”

India’s Covid death toll surpassed 400,000 at the beginning of this month, and many areas have struggled as a result.

A graveyard in Jahangirabad, east of Delhi, also had a dozen pits dug in advance last year to avoid over-crowding in case of arrival of multiple bodies.

A cemetery in Tijuana, Mexico, was forced to call in bulldozers to clear land to make space for more graves and victims bodies arriving in plastic bags.

“The majority of the [Covid] bodies come wrapped in plastic bags and the coffins too are contained in plastic,” one of the gravediggers told the LA Times.

Indonesia is currently seeing its worst Covid outbreak so far, with more than 70,000 lives claimed, and many believing the toll is in fact much higher.

The Rorotan Public Cemetery, in Jakarta, has seen more than 1,800 pandemic victims buried there, with one gravedigger estimating they were digging 100 graves each day. 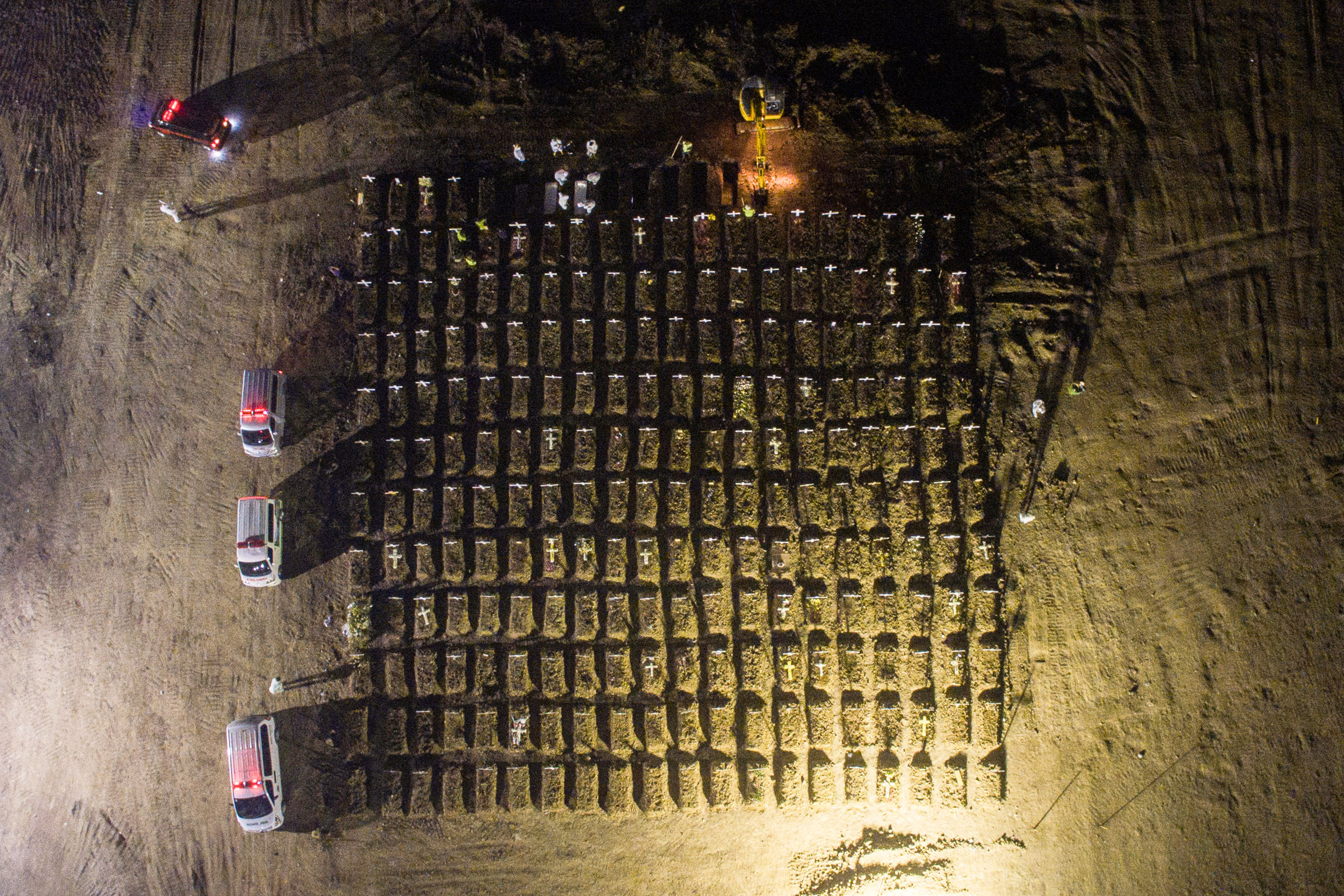 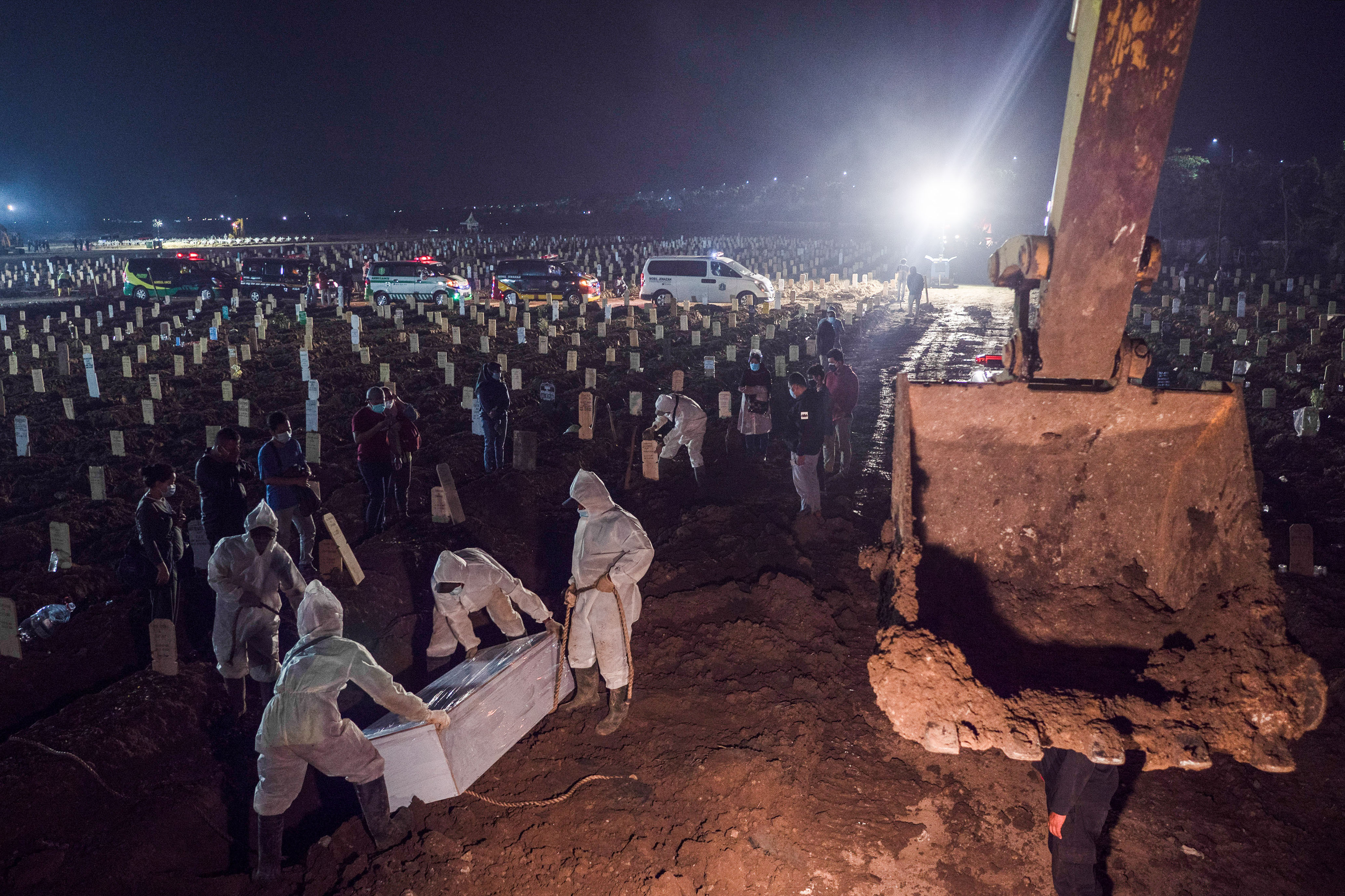 At the height of America’s pandemic, 800 New York citizens were dying per day, leaving morgues, funeral homes and cemeteries overflowing.

When police found dozens of decomposing bodies in two trucks outside one funeral home the owner told them he’d run out of space, and other funeral homes were forced to hire refrigerator trailers to store the dead. 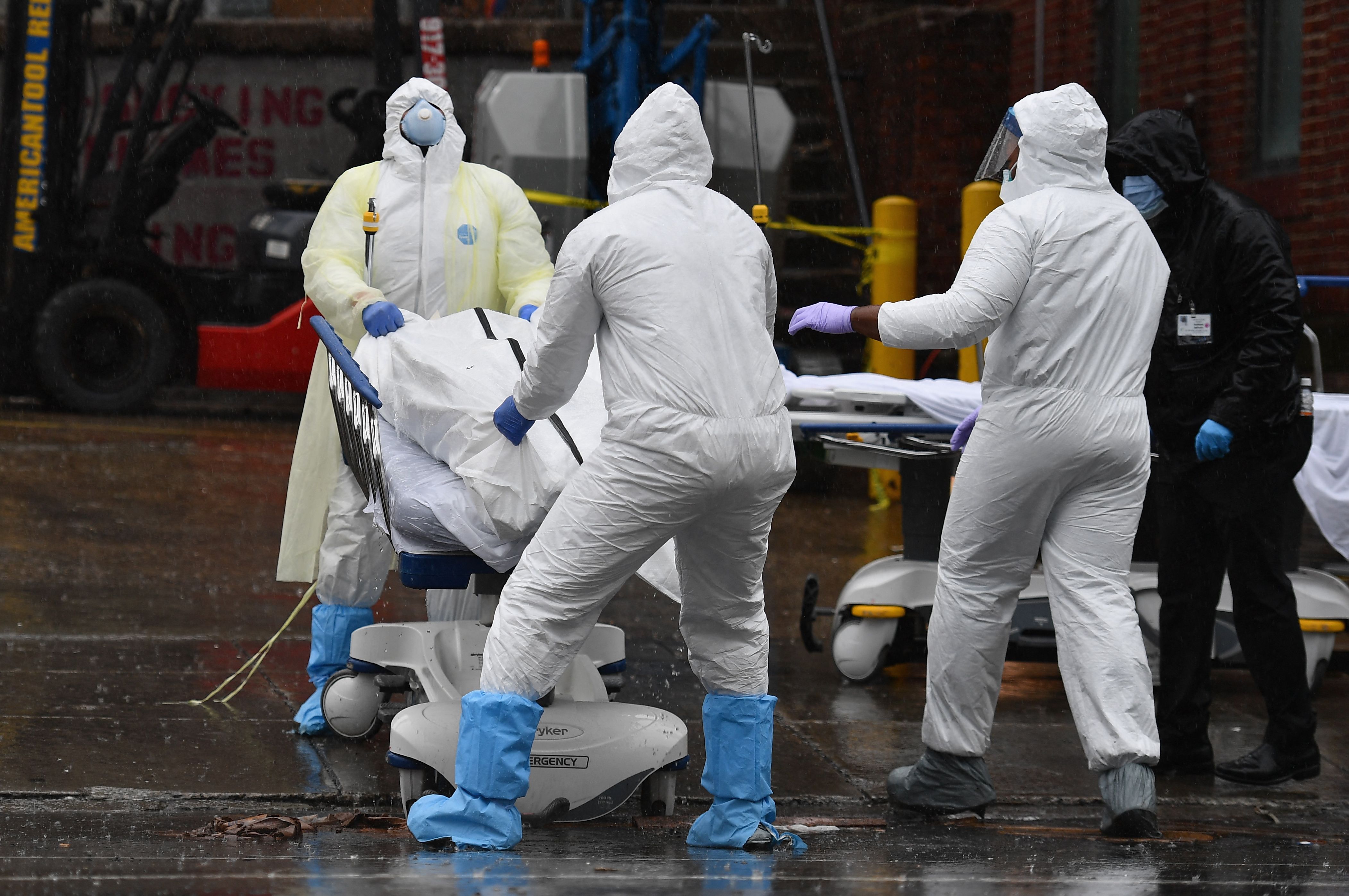 Bodies were stored in refrigerated trucks in New YorkCredit: AFP

Aerial footage also emerged of coffins being buried in a mass grave in New York City.

The site, Hart Island, has long been used for those with no next of kin or money to pay for a proper burial, but while 25 people a week were usually buried there, during the pandemic they were seeing 24 burials a day. 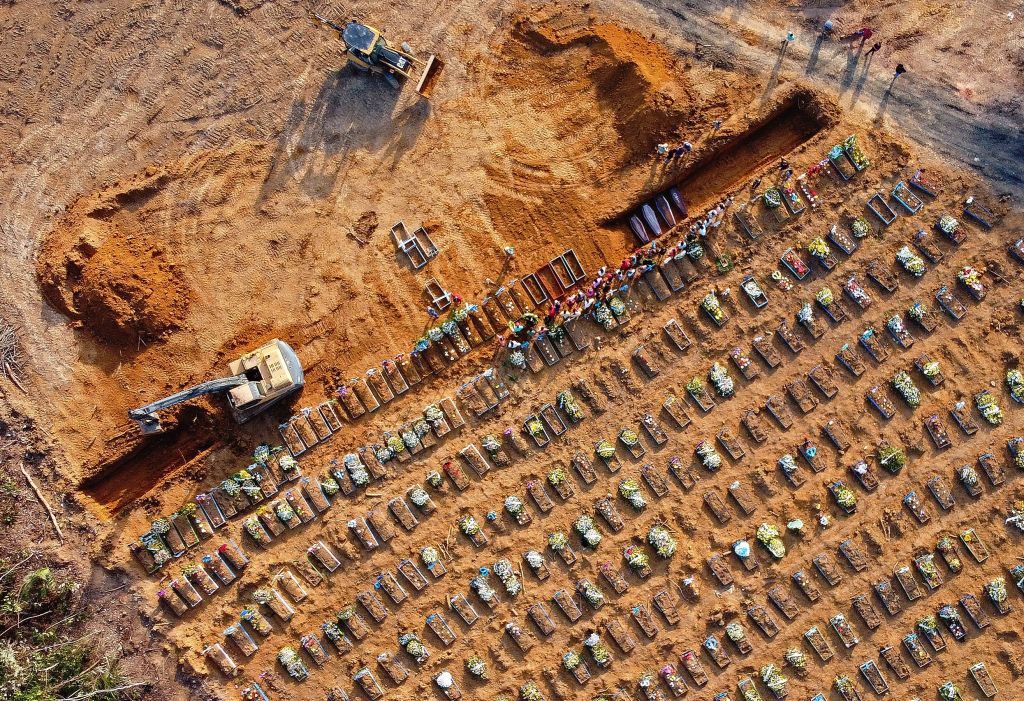 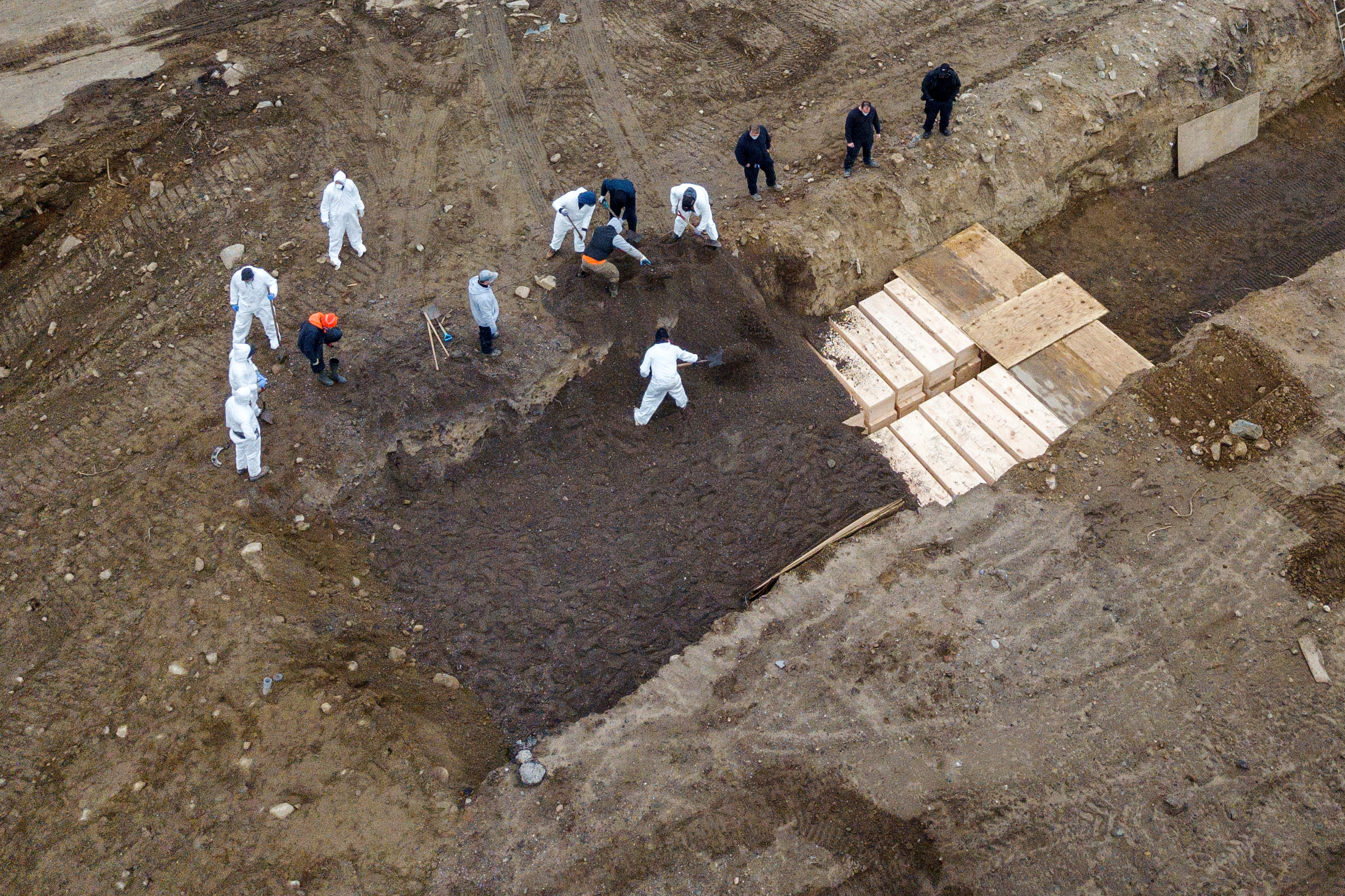 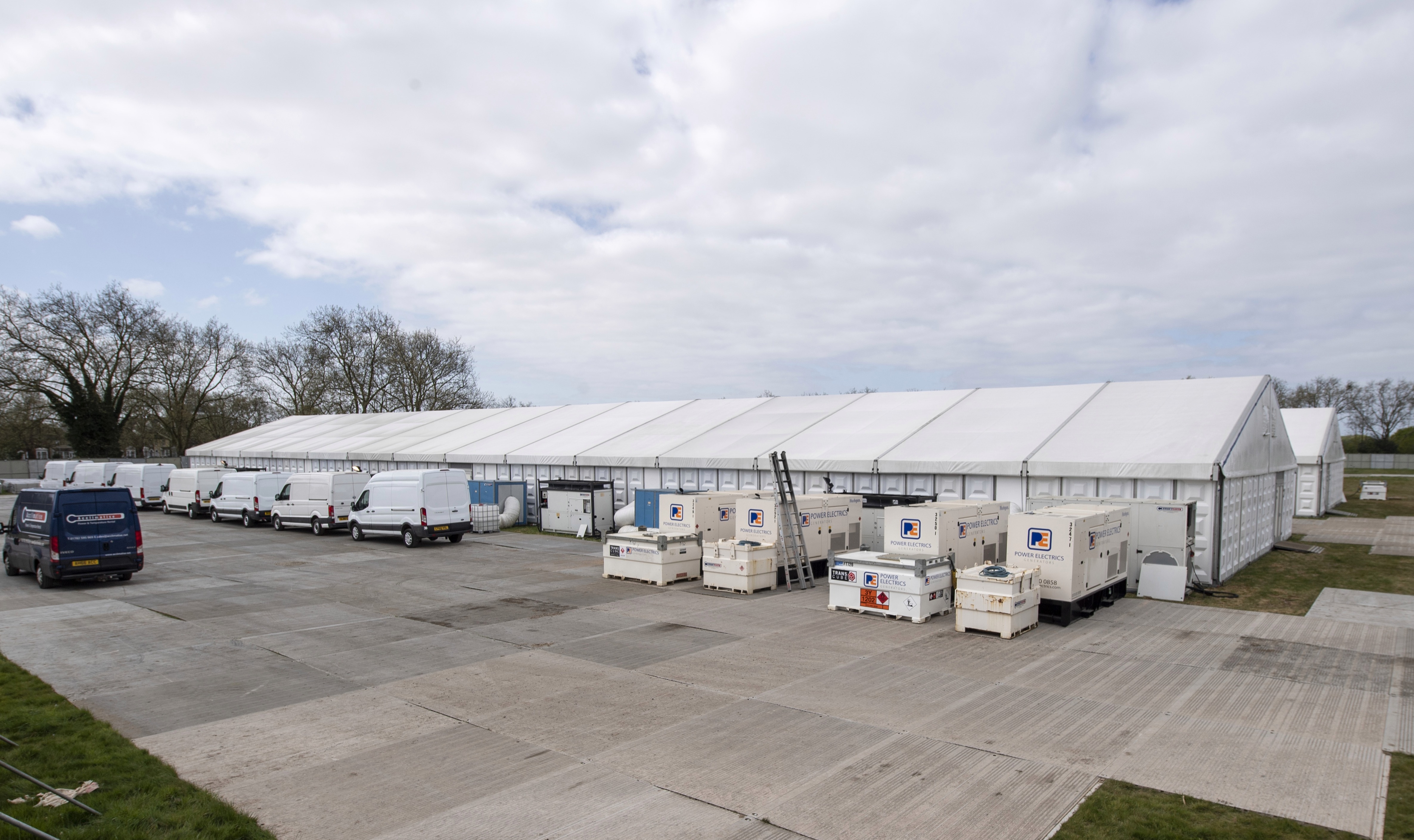 A makeshift morgue on Wanstead Flats, London, set up at the beginning of last yearCredit: Getty

Overflowing Brazil cemetery digs up 1,000 skeletons to make room for more Covid victims as deaths spiral out of control 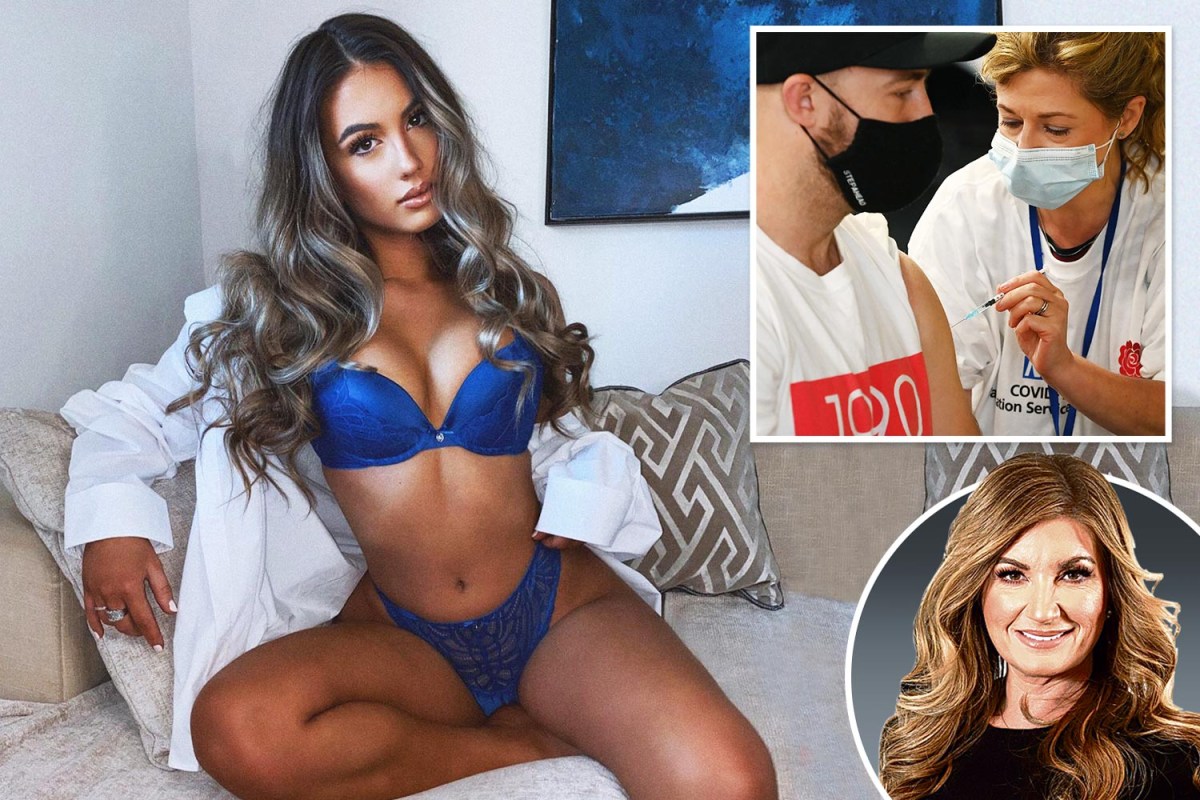