Interactive map reveals how unhealthy Covid is in YOUR native space

THIS interactive map reveals how many coronavirus cases are in your area as the new variant drives huge outbreaks. 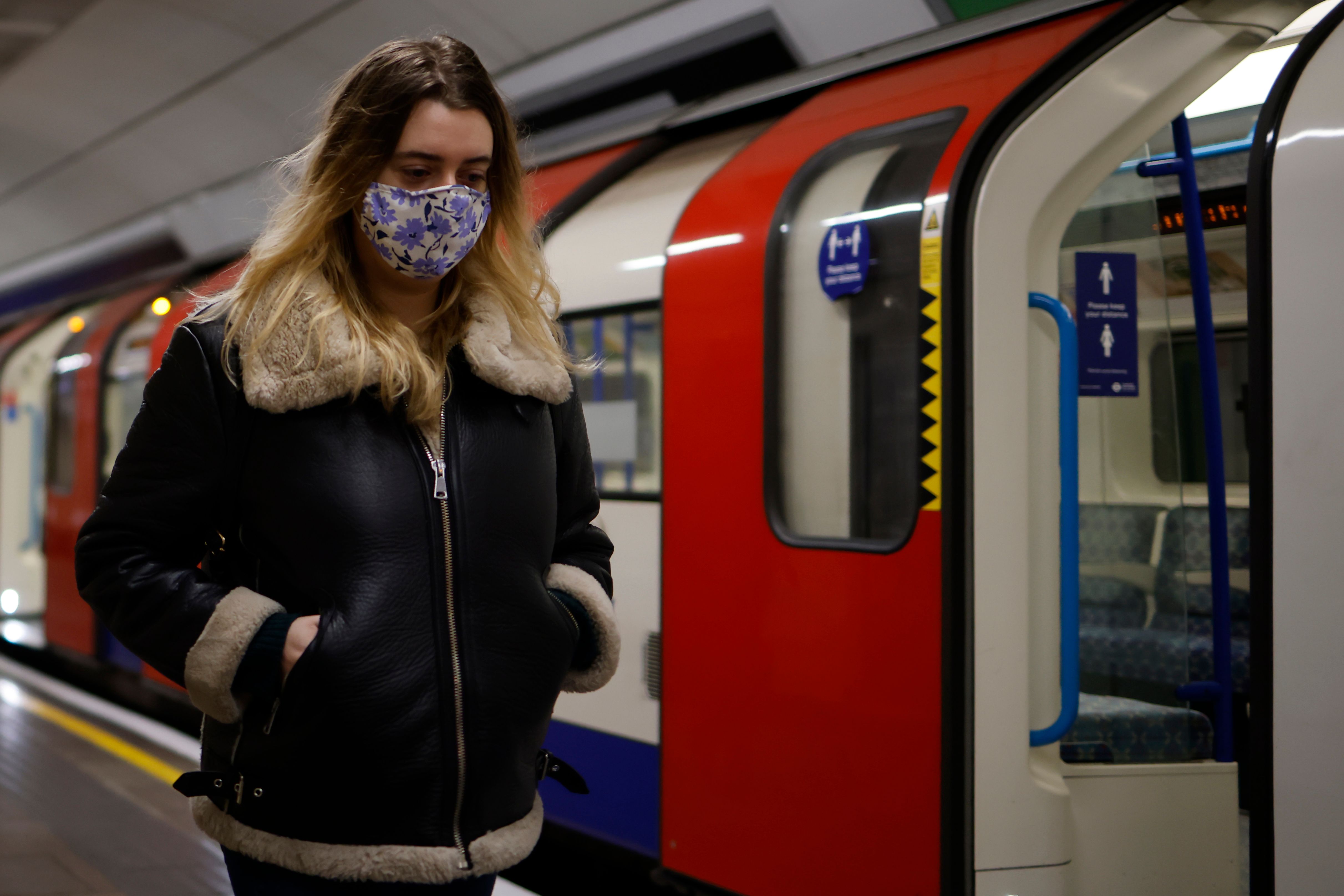 Commuters travel on the London Underground as England prepares to enter a national lockdown from midnight Credit: AFP or licensors

From midnight tonight, everyone must “stay at home”, other than for limited reasons such as to shop for essentials, exercise, seek medical assistance, escape domestic abuse or work if you cannot work from home.

Wales and Northern Ireland are already in lockdowns, with Scotland joining them today.

The new lockdown is planned to last until the middle of February, when the PM hopes for all the most vulnerable people to have been vaccinated.

However, it may not be until March that the UK realistically comes out the lockdown, senior Cabinet minister Michael Gove warned this morning.

“We will keep these constantly under review, but we can’t predict with certainty that we will be able to lift restrictions in the week commencing February 15-22,” he told Sky News.

The Government coronavirus dashboard reveals how the outbreak has escalated over the past month due to the new variant.

Despite the November lockdown, cases surged in the southern parts of England, which ministers and scientists now understand was a result of the new variant – which is harder to control with restrictions.

Graphs show that at the beginning of December, after the second lockdown, cases were growing in the south but easing in the north. 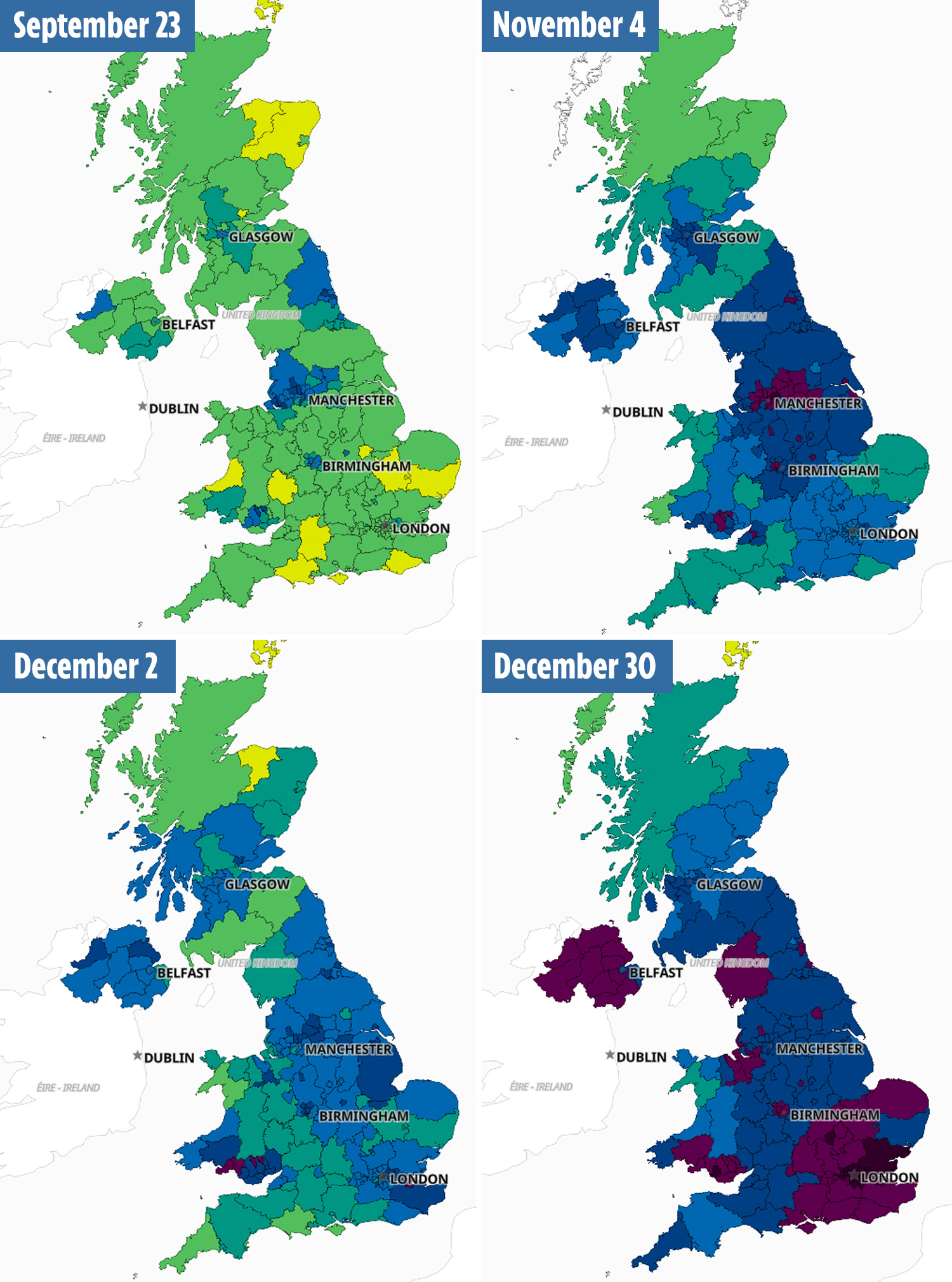 How Covid cases have changed from September (beginning of the second wave), to November (the second national lockdown), early December (the end of the lockdown, when the new variant began surging), and end of December. The darkest purple is 800+ cases per 100,000, while the lighter purple is 400-800 case sper 100,000

By the end of the month, dozens of authorities in the South East and London were reporting infection rates of more 800 per 100,000 people. And the North has once again tipped back into dangerous territory.

WHERE ARE CASES HIGHEST?

Data from Public Health England shows that 93 per cent of local areas in England have seen a rise in cases in the past seven days.

Barking & Dagenham in London continues to have the highest rate in England, recording 1,476 new cases per 100,000 people in the week to December 31 – the most recent data from Public Health England.

Where are Covid cases highest?

From left to right, it reads: name of local authority; rate of new cases in the seven days to December 31 per 100,000 people.

Data from the Government’s coronavirus dashboard shows that 58,784 people tested positive for the virus on January 4. 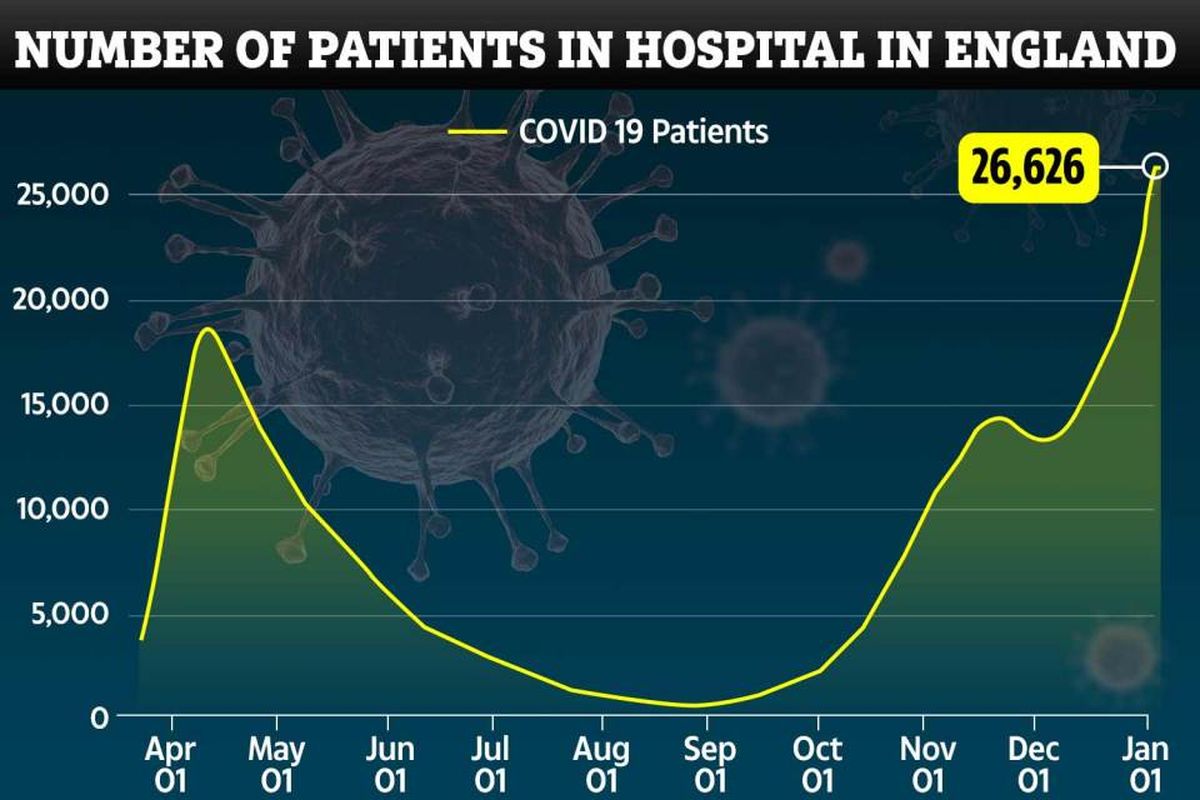 Up to this date it also states that 2.7 million people have now tested positive for Covid-19 in the UK. But there will be millions more who had the virus and never got a test.

The Office for National Statistics estimates around one in 85 people have the virus at any given time – and that’s based on swabs before the Christmas period.

In his address, Mr Johnson warned the coming weeks will be the “hardest yet”.

The drastic lockdown measures have come amid the growth of a new coronavirus variant which is between 50 and 70 per cent more easily spread.

Mr Johnson said: “There is no doubt that in fighting the old variant of the virus, our collective efforts were working and would have continued to work.

“But we now have a new variant of the virus. It has been both frustrating and alarming to see the speed with which the new variant is spreading.”

What did the PM say last night?

Mr Johnson was forced to act just hours after the chief medical officers of the UK said the NHS could collapse within three weeks.

Hospitals have been described as “warzones” as a result of staff being stretched thin to care for record high patients.

Some doctors and scientists expressed concern that the latest measures would still not be enough to prevent the NHS being overwhelmed.

Dr Claudia Paoloni, chairwoman of the Hospital Consultants and Specialists Association, told BBC Radio 4’s Today programme: “We’re now in a situation where the risk of overwhelming the NHS at this point, over the next few weeks, is very, very high.”

The PM told Britons last night that “with a fair wind in our sails” it should be possible to vaccinate 13 million of the most vulnerable people by mid-February, paving the way for controls to be eased.

This will have a large impact on hospitalisations and deaths, which leaves room for measures to be relaxed in some way. 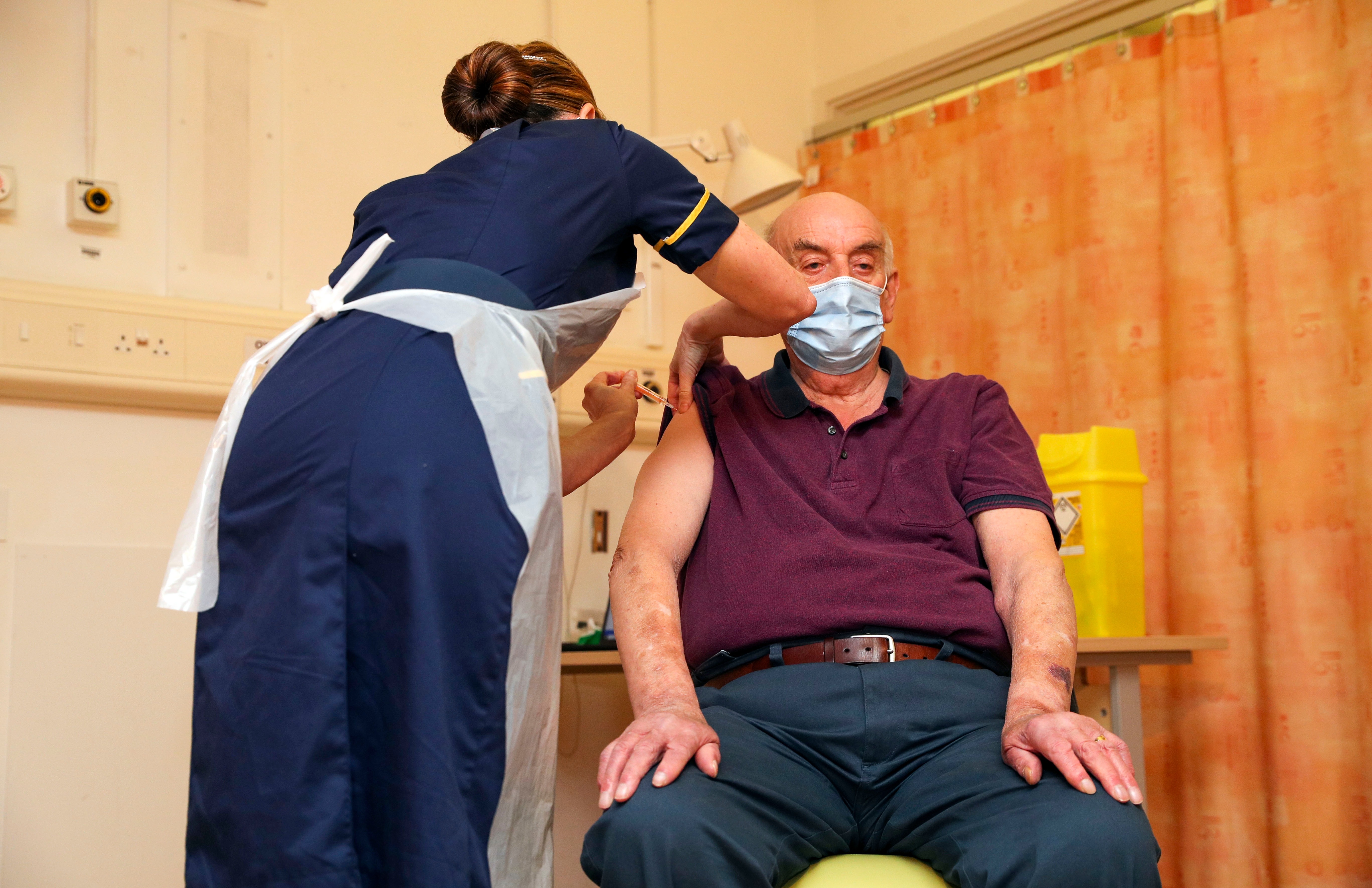 Brian Pinker was the first person to receive the Oxford vaccine outside of clinical trials yesterday morningCredit: Getty – Pool

The ambitious roll-out plans mean two million people will need to be vaccinated per week – which officials say the NHS has capacity to do as long as supply of doses is available.

Scientists, who say the vaccine is the only way out of the pandemic, are dubious the mid-February target can be fulfilled.

Dr David Strain, Clinical senior lecturer and honorary consultant, Co-Chair BMA Medical Academic Staff Committee, University of Exeter Medical School, said: “I have some reservations about his optimistic timeframe to have everyone in the top four priority groups, approximately 12-14 million adults, immunised within the next six weeks.

“Assuming all of these vaccines can be sourced, given the limitations in the fill and finish process (i.e. the packaging process prior to delivery to the vaccination centres), there is still uncertainty as to how the logistics of these 2 million vaccines per week will be operated.”

Dr Simon Clarke, Associate Professor in Cellular Microbiology at the University of Reading, said: “Boris Johnson said that at the very best, the most vulnerable in our society could receive their first vaccination by mid-February, but that would not alleviate the immediate pressures on the NHS.

“It seems likely that the British people are due for a long haul before the restrictions on their lifestyles can be lifted.

“Getting the millions of the most vulnerable people their first dose of vaccine is a good start, but this group will need their second jab before they have the kind of protection that trials have shown is possible.

“Even then, a small proportion of vaccinated people could still catch the virus if it is still circulating widely in the rest of the population, and crucially, elsewhere in the world.”

Prof Mark Woolhouse, Professor of Infectious Disease Epidemiology, University of Edinburgh, said vaccinating the priority groups “will not be enough to achieve herd immunity so the virus would still be able to circulate in the general population in the absence of restrictions”.

It came after the first people were jabbed with the Oxford/AstraZeneca vaccine yesterday, hailed by Mr Hancock as a “pivotal” moment in the pandemic.

The jab was the second to be approved after that made by Pfizer/BioNTech, which began being dolled out a month ago.

The UK has secured a deal for 140 million doses of the two vaccines combined, enough to vaccinate the whole population (66 million) with the two necessary doses.

So far one million people have been given the first dose of a vaccine as the NHS operation started at a slow pace.