When Joey Lykins woke up one day five years ago and noticed his septum piercing was missing, he assumed it had just fallen out when he was sleeping.

‘I thought maybe I’d swallowed it,’ Joey, who has 12 other piercings, recalled. ‘I looked everywhere, I flipped the bed over, I did everything.

‘I have a thing for piercings and tattoos so I just replaced it.’

Joey didn’t think much else of it after that… until five years later, when he woke up coughing so violently that he took himself to the hospital.

He said: ‘I felt like something was blocking my airways and I thought I was sick.

‘About 2.30am I was coughing so hard that my back was starting to hurt and I was a little concerned so I went to the hospital. I thought maybe I had pneumonia.

‘It felt like there was something there when I was coughing but I just thought I was sick.’ 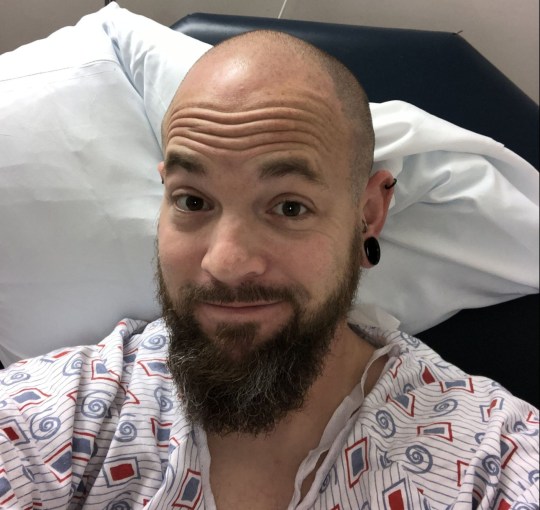 Joey’s nose ring fell out in his sleep (Picture: Kennedy News and Media)

At the hospital, the doctor’s x-rayed Joey’s lungs to check for pneumonia. They were stunned to instead spot the piece of jewellery in the upper lobe of his left lung.

Joey, from Cincinnati, Ohio, US, said: ‘I had an x-ray and the doctor came in and showed me the x-ray picture and said “does this look familiar?”

‘I was like “you’ve got to be kidding me? I’ve been looking for that”. 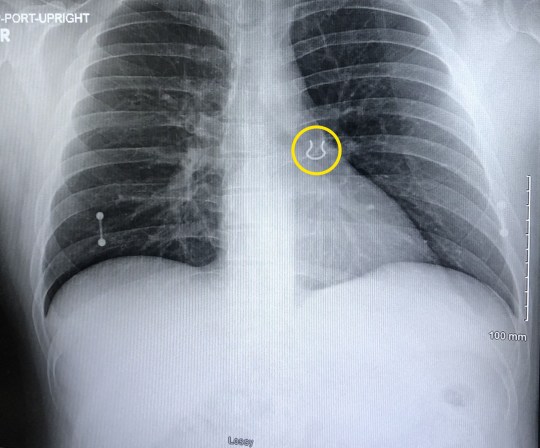 He assumed it had just got lost in bed, but five years later he developed a bad cough… because the nose ring was in fact in his lung (Picture: Kennedy News and Media)

‘It just went down my windpipe I guess.

‘My wife was dumbfounded when I told her. The doctor said I’d won best case of the night.’

The 35-year-old groundskeeper knows it’s hard to believe unless you have proof – so he made sure he kept copies of his x-ray and even images from the surgery that shows the ring being extracted from inside him.

Three days later Joey went to have a bronchoscopy. A thin tube was passed down his throat and into his lungs and the piercing was pulled out and returned to him. 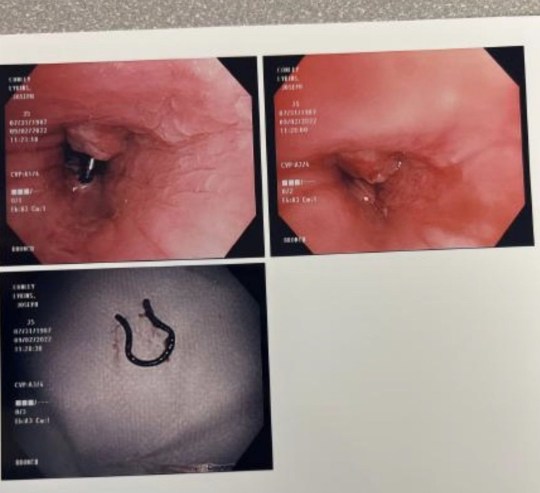 A horrifying image of the nose ring in Joey’s lung (Picture: Kennedy News and Media) 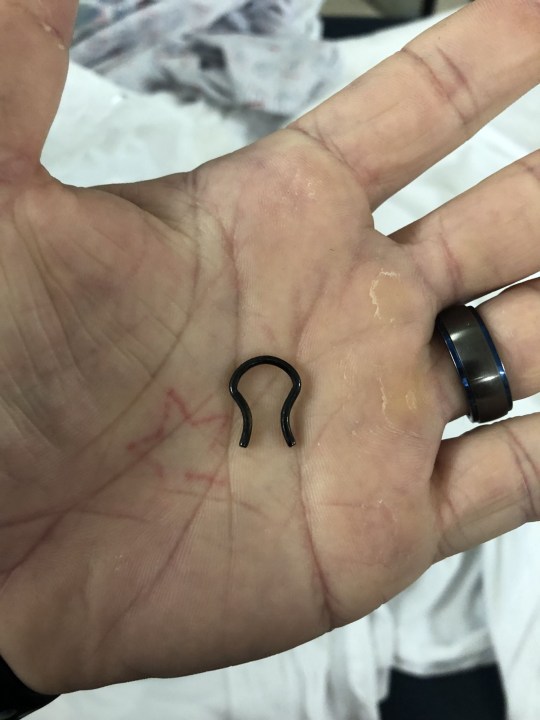 Yes, he got the nose ring back (Picture: Kennedy News and Media)

Joey added: ‘I kept it as a souvenir, I won’t be wearing it again.

‘I don’t know if it could have caused damage but it was wrapped up in scar tissue so it didn’t look like it was going anywhere.

‘It had never caused me problems, I’ve coughed but I never thought too much of it.

‘I didn’t know what was going on but I never have thought that’s what it was. I’ve never heard of it happening before.’