AN MP wept in Parliament yesterday as he revealed his mother-in-law died alone of Covid — while No 10 aides held parties.

In highly charged scenes, veteran DUP MP Jim Shannon broke down in tears as he told Parliament of his family’s heartbreak after it was revealed Downing Street was breaking the rules it had set.

The MP could not hide his emotions and he describe the pain of losing his mother-in-lawCredit: Pixel8000 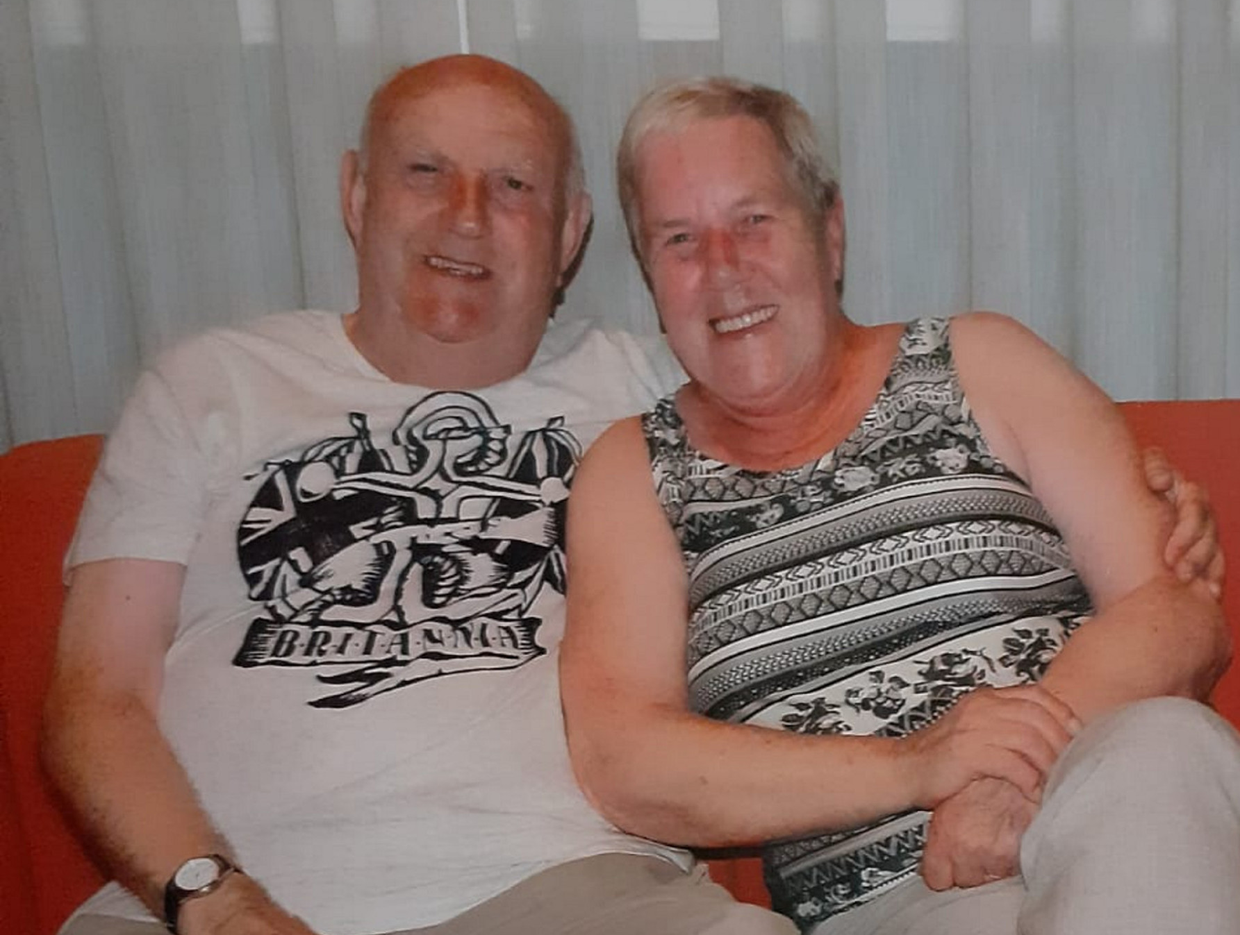 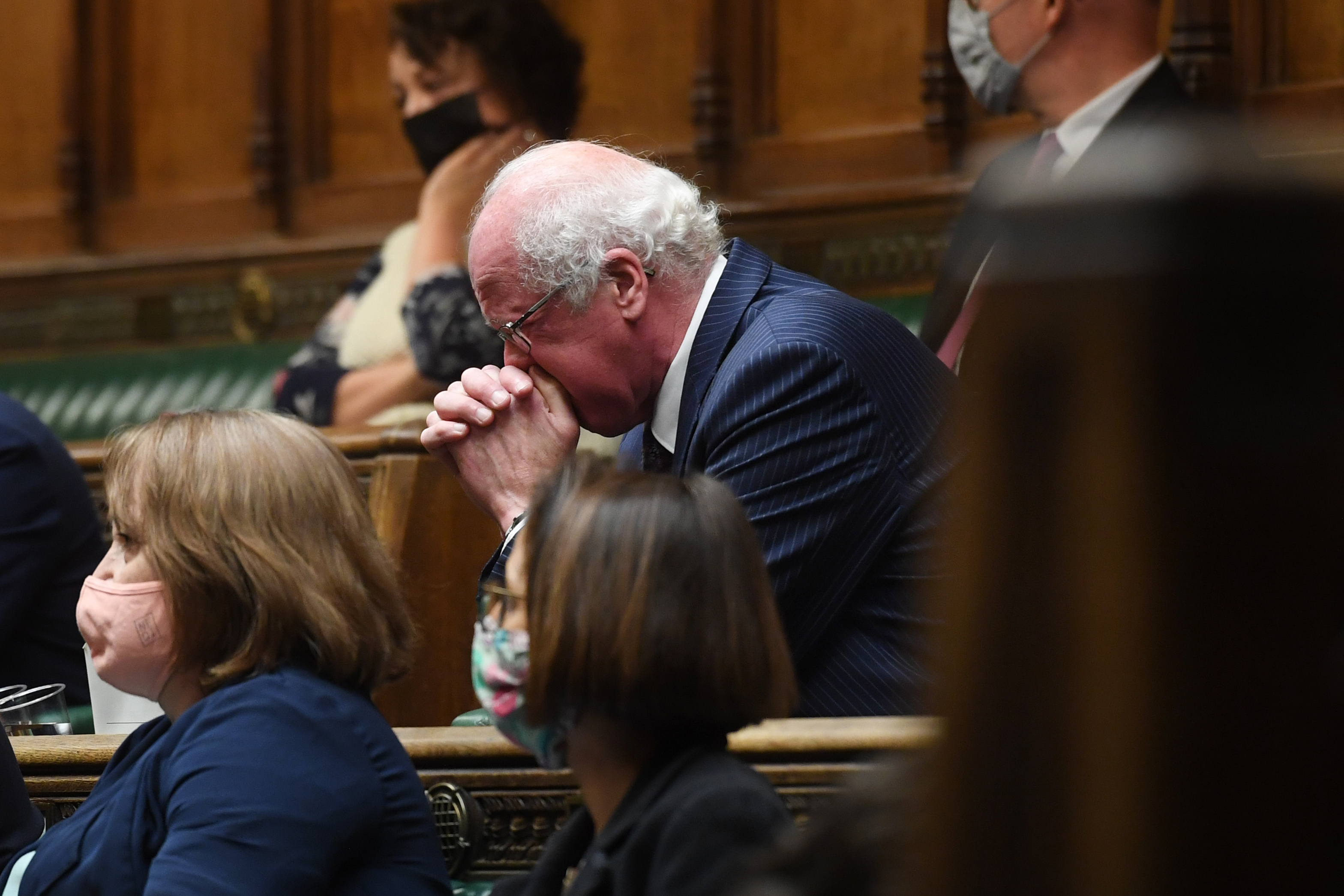 Mr Shannon said: “In Northern Ireland we reached the milestone of 3,000 deaths due to Covid just last week. Including my mother-in-law, who died alone.”

Meanwhile, the usually rowdy chamber fell silent as Labour MP Afzal Khan said his mum died alone of coronavirus. He told how he sat in his car outside the hospital so he could be “close to her”.

PM Boris Johnson is battling to cling on to his job after a bombshell email revealed No 10 staff were invited to a boozy Downing St garden party on May 20, 2020 — the height of the first lockdown.

The email was sent by the PM’s principal private secretary Martin Reynolds. It invited 100 staff to “socially distanced drinks in the No 10 garden”.

It encouraged guests to “bring your own booze” and “make the most of the lovely weather”.

Witness claim Mr Johnson and wife Carrie were among about 30 people who attended although he has declined to confirm or deny it.

And the PM faced fresh fury yesterday by refusing to show up to a Commons showdown over the partying allegations. Instead he sent mid-ranking minister Michael Ellis to take the heat.

As “Bunker Boris” hid from the cameras — and criticism — MPs contrasted the shocking allegations with the heartbreaking sacrifices made by millions across the UK during the pandemic.

Mr Shannon, whose mother-in-law Jemima George died in October 2020, pleaded with ministers for reassurances that No 10 will come clean with the police about what happened at the gathering.

Mr Khan said his mum died two months before the bash. He said: “My mum died of Covid in March 2020.

“She died alone in hospital while I sat in the car outside trying to be as close to her as I could.

“Even burdened with our grief, my family obeyed the rules. Just three days after the Downing Street party we marked a solemn Eid, the first without my lovely mum. When asked about the parties, the Prime Minister did little but smirk and laugh. He should be here today.”

He said the PM should be “apologising to bereaved families like mine” for the “anguish, pain and torment” caused by the parties and the lies spun to cover them up.

Labour MP Chris Elmore said he almost missed the birth of his son in January last year because of strict Covid lockdown rules.

Meanwhile, other MPs spoke on behalf of furious constituents who missed funerals, weddings and were banned from seeing loved ones in care homes over the past two years.

Raging Labour and SNP politicians ganged up to accuse Mr Johnson of lying over breaking rules and hiding from the public by refusing to own up. Labour deputy leader Angela Rayner said: “I think his absence speaks volumes. He can run but he can’t hide.”

In a stormy and often painful session, Paymaster General Mr Ellis was heckled and jeered as he insisted the PM abides by the same rules and laws as everyone else.

He said it would be inappropriate to comment on the partygate claims while Whitehall enforcer Sue Gray’s investigation is ongoing.

Anyone found to have breached rules will face disciplinary action and will be shopped to the police if they broke the law, he said.

He denied the PM was in hiding and hit back at calls for Mr Johnson to quit over the scandal.

Mr Ellis said: “The Prime Minister is going nowhere. He retains the confidence of the people of this country and he did so two years ago with the biggest majority in decades.”

But while Mr Ellis was insisting Mr Johnson’s position is secure, the PM’s support among the Tory backbenchers was crumbling.

The Conservative benches were virtually empty during the partygate debate, and just two backbenchers — Maria Miller and Suzanne Webb — spoke up for the PM. Some Tory grandees broke ranks to voice their anger at the party and sleaze stories that have left the party’s reputation battered and bruised.

Conservative former minister Sir Christopher Chope asked: “Why can’t all the dirty linen be washed at once? Why are we getting this drip, drip feed of parties?

“Surely the civil service must have known that there was a party on May 20 and they should have referred it already to the inquiry.”

Tory lockdown sceptic Desmond Swayne said the bombshell claims should be a “powerful corrective” against a rush to ever impose restrictions on Brits again.

In the offices, bars and cafes of Westminster, Tory MPs were predicting that Mr Johnson would not last long in the top job.

The PM’s official spokesman refused to comment on claims surrounding the drinks event while the investigation was taking place. But he added that the PM retained full confidence in Mr Reynolds. 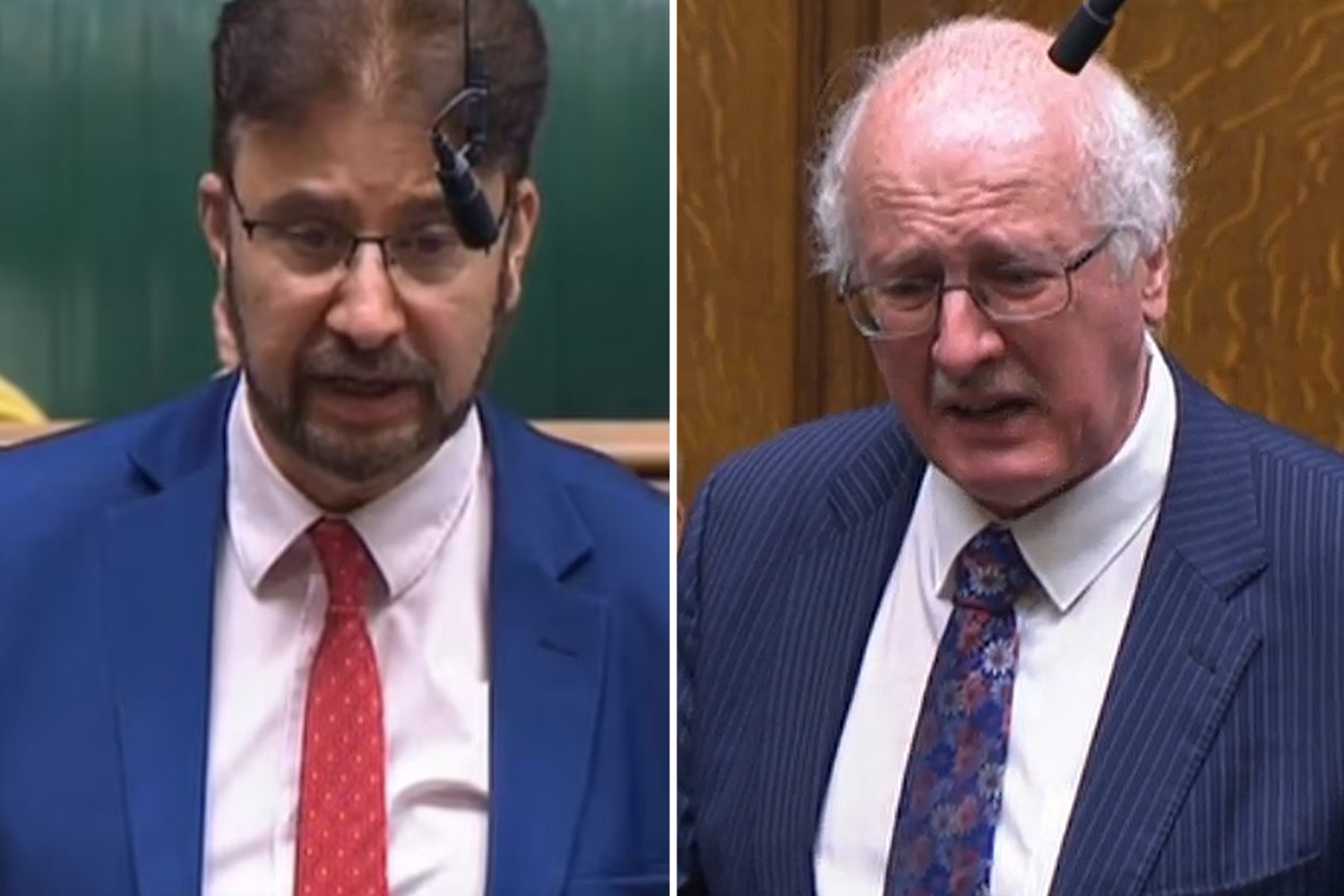 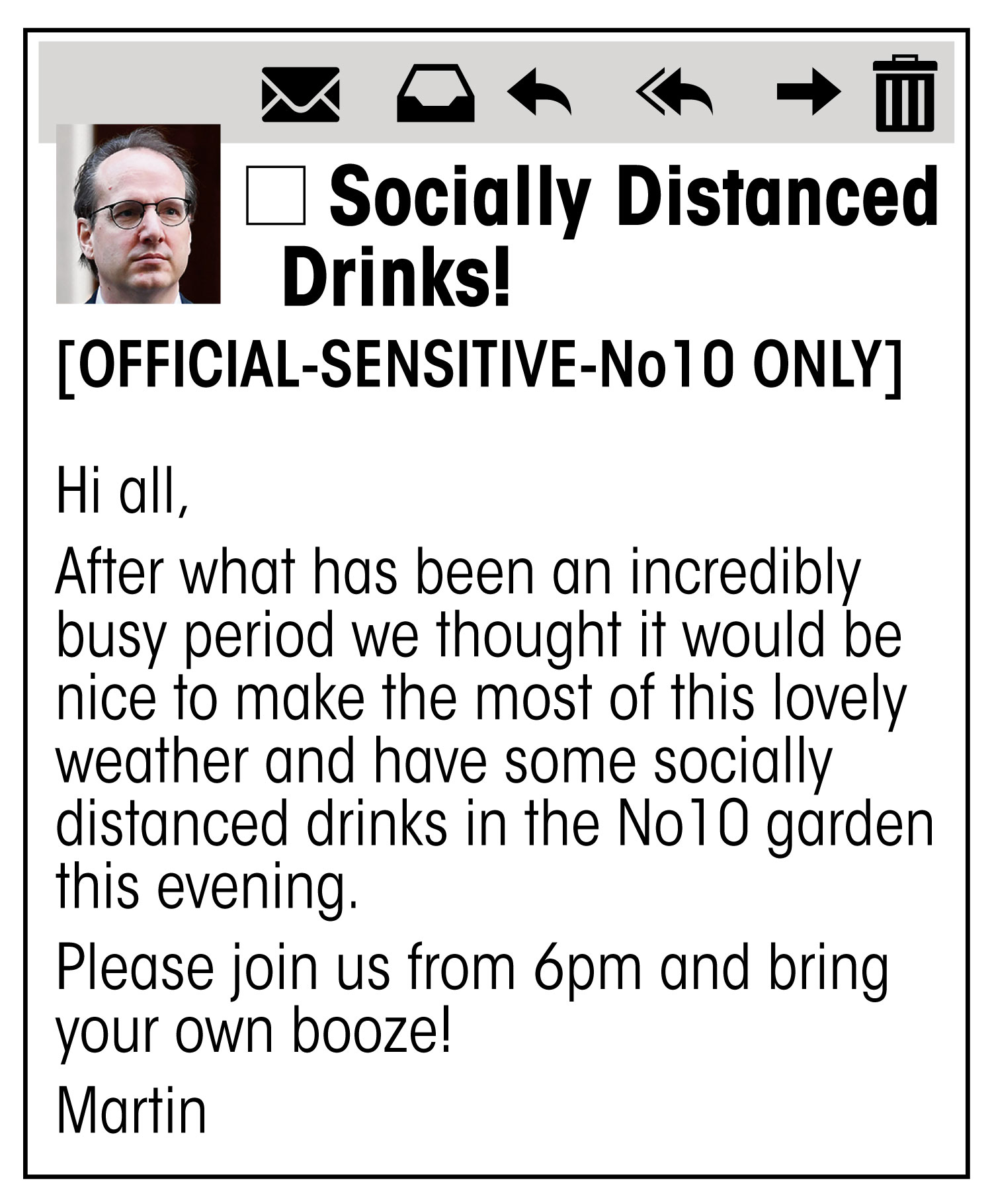 The email sent to No10 staff by official Martin Reynolds 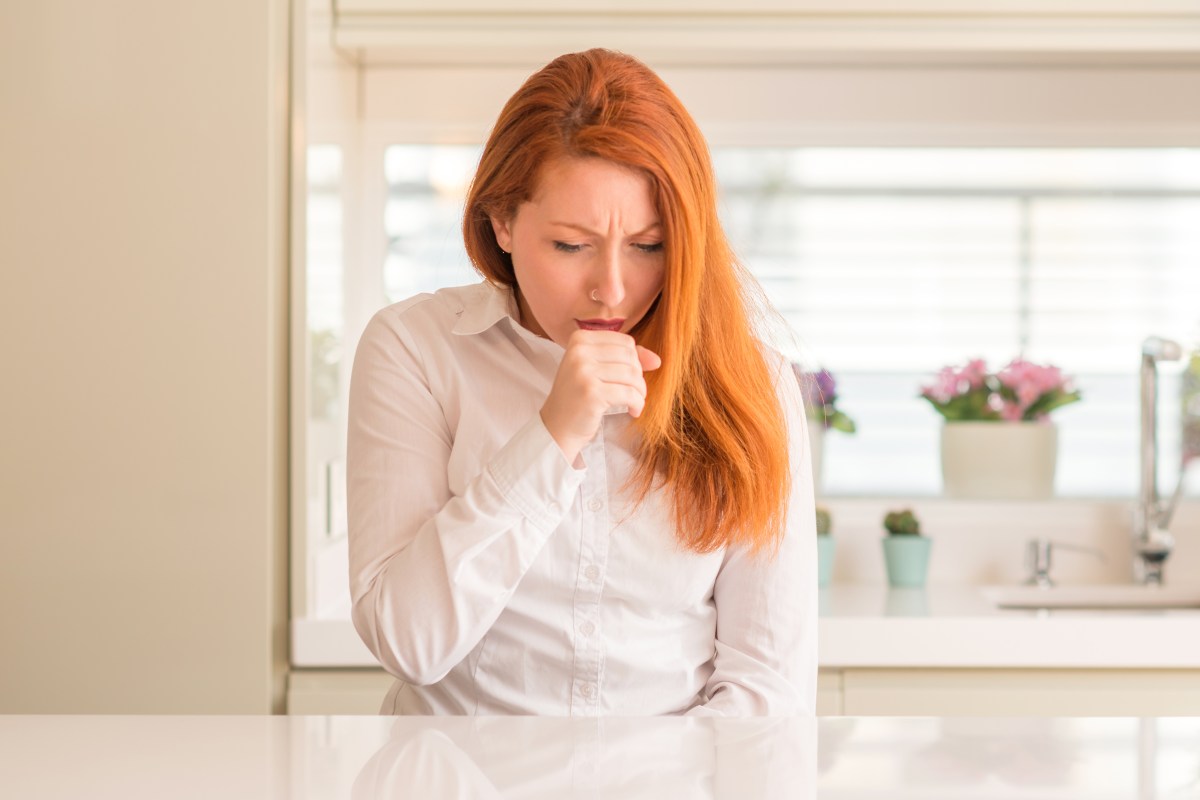 OMICRON has been circulating in the UK for close to two months now and most people who have it say...