Emma wants to raise awareness of what she went through – but sees the funny side with her party tricks (Picture: Jam Press)

A mum who was diagnosed with a deadly cancer has shared how her appearance has changed drastically after having her eye removed – but can now perform party tricks with her empty socket.

Emma Cousins, 34, from Sheffield, has been living with one eye after being diagnosed with mesenchymal chondrosarcoma – a type of cancer – in April 2018.

She had noticed her left eye appearing to grow and bulge, but when she started to feel unwell shortly after her daughter’s second birthday, she went to A&E to get checked out.

‘My eye felt stretched and I felt sick,’ Emma, who is mum to an 11-year-old son and five-year-old daughter, said.

‘The doctor thought it was a small bleed so I saw an out of hours optician who asked if I had any selfies on my phone.

‘I had six years’ worth of pictures so I showed the optician, who asked to see pictures of me from further back. It was at that point I thought “oh no, something is wrong”.

‘I managed to find pictures of me at 15, and he optician said he didn’t know for sure, but that it looked like something had been growing behind my eye since I was 17.’ 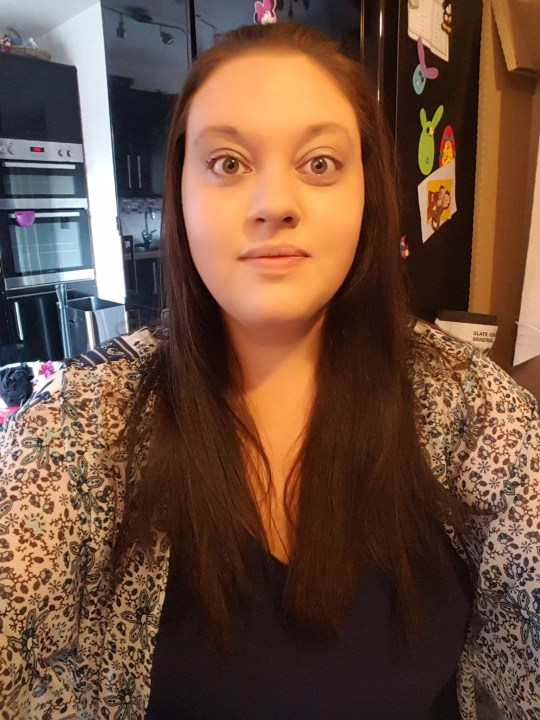 Emma in June 2017, before she had her eye removed (Picture: Jam Press)

Looking at the images side-by-side, Emma could see a subtle difference as her eye appeared to change shape over time.

She was booked in for an MRI scan which found a large tumour growing behind her eye that was identified as a form of sarcoma cancer. Although other treatments were tried out, Emma was told that she would have to lose her eye.

Emma said: ‘The doctor said “the eye will have to come out” and told me I’m the only person in England with it, and that chemotherapy wouldn’t work.

‘He told me not to Google it but obviously that was the first thing I did when I was alone. I wish I had listened as all I could find were pages saying it spreads to the lungs and you die.’

Despite being terrified beforehand – and worried about whether her children would recognise her – Emma made it through the tough surgery, and later started a six-week course of radiation therapy.

More scares were to come, though, as an unexpected reaction to the treatment led to her being paralysed and in the ICU on a ventilator.

‘Doctors told my family I would die, but to their surprise I regained the ability to talk, my arms started to work, and I have slowly recovered to the point I can now walk myself – although not as well as I used to,’ said Emma.

She was referred to have a prosthetic eye made, but found it to look ‘fake’ and would be too much ‘faff’, so opted instead to wear glasses and eye patches.

Over time, a small hole developed in her empty socket – which doctors believe was caused by the radiation – which has been widened.

Emma said: ‘Simple things like having a shower or being in heavy rain can drown me as the hole is directly connected to my lungs – meaning anything going in my eye can enter my lungs. 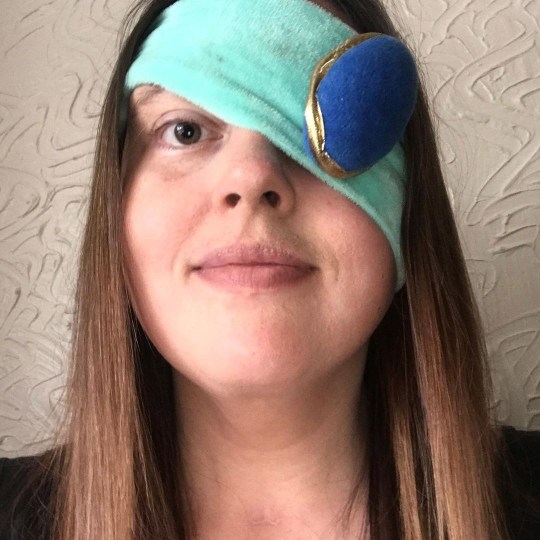 Emma has shared her journey on TikTok (Picture: Jam Press)

‘I have to stay away from a swimming pool and baths as I could drown.’

Despite her suffering, she has received global attention on TikTok, after taking to the social media platform to share videos of her empty socket.

One video received 15 million views, with thousands of fans cheering her on.

One person said: ‘I would just like to say this is not scary but inspiring, unique and beautiful. Because this is who you are.’

‘This is so powerful,’ another fan added.

Emma has also showed off her unique party tricks – which include blowing out candles with the hole in her socket.

Now, the mum is focusing on continuing her recovery – which should hopefully involve a procedure taking a chunk of skin from her leg to cover the hole in her socket.