A PUNTER has claimed they managed to buy almost £500 worth of booze alongside just ONE scotch egg under new coronavirus rules.

A receipt for a posh restaurant in central London appears to show that a table of nine guests managed to get through 63 pints of Peroni – at £6.50 a glass. 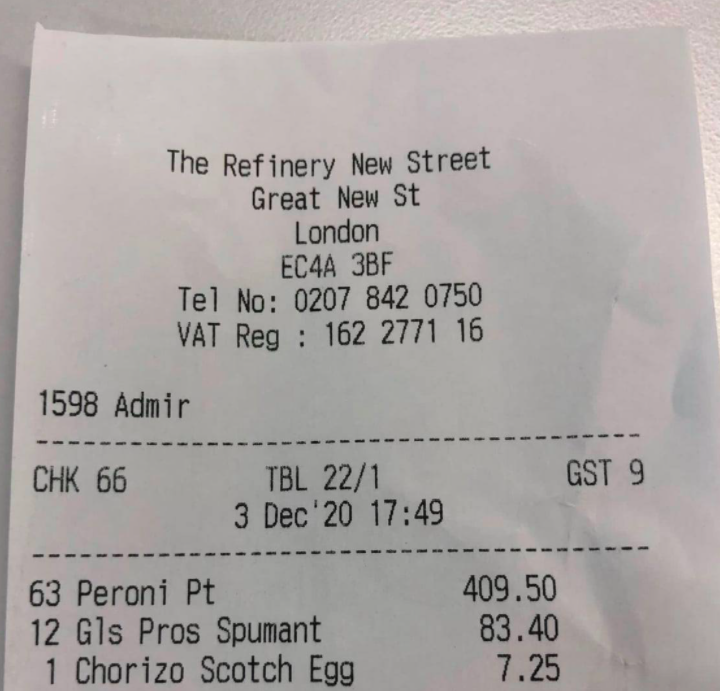 The Refinery, which is under Tier 2 restrictions, also apparently served them twelve glasses of prosecco, for £6.95.

The bill then shows a single chorizo scotch egg was ordered for the whole table – costing £7.25.

If the receipt is real, it means the bar snack made up less than two per cent of the overall bill, which came to a whopping £500.15 on Thursday night.

However it is not clear if the receipt is genuine, with the picture cut off abruptly as it was shared online.

And social media users were unsure of the claims, with one writing: “Already saw this pic widely used on socials.

“And way this is cropped suggests a lot more food could be listed below. Selective cropping.”

Another added: “What other food was on the receipt?”

When contacted by The Sun Online, the restaurant declined to comment.

According to the Government’s COVID-19 winter plan: “Venues that serve alcohol can only remain open where they operate as if they were a restaurant, which means serving substantial meals (and accompanying drinks).”

And debate has since raged over whether a Scotch egg would count as a substantial meal after Environment Secretary George Eustice said that the dish would be allowed under the new rules.

But Michael Gove later LBC radio: “A couple of Scotch eggs is a starter, as far as I’m concerned.”

But the Minister for the Cabinet Office left listeners more baffled when he uttered the words “with pickle on the side”.

And he told Good Morning Britain: “As far as I’m concerned, it’s probably a starter.” 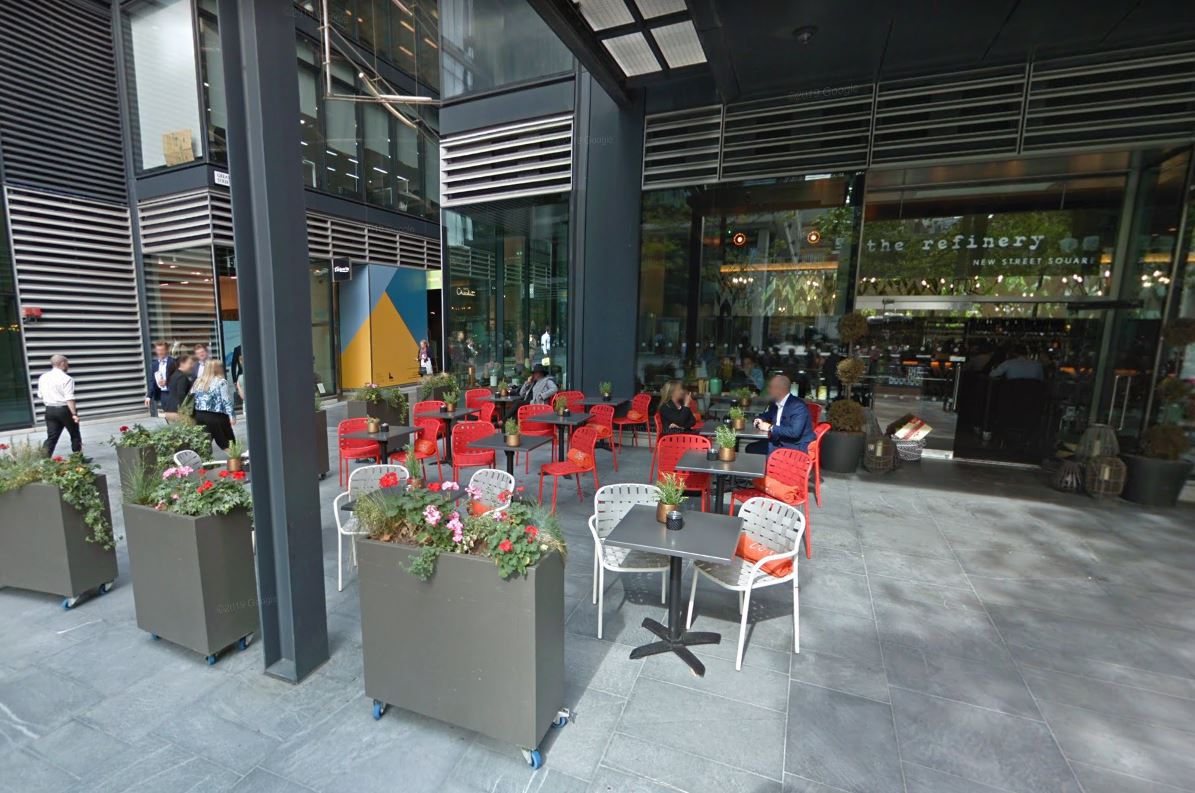 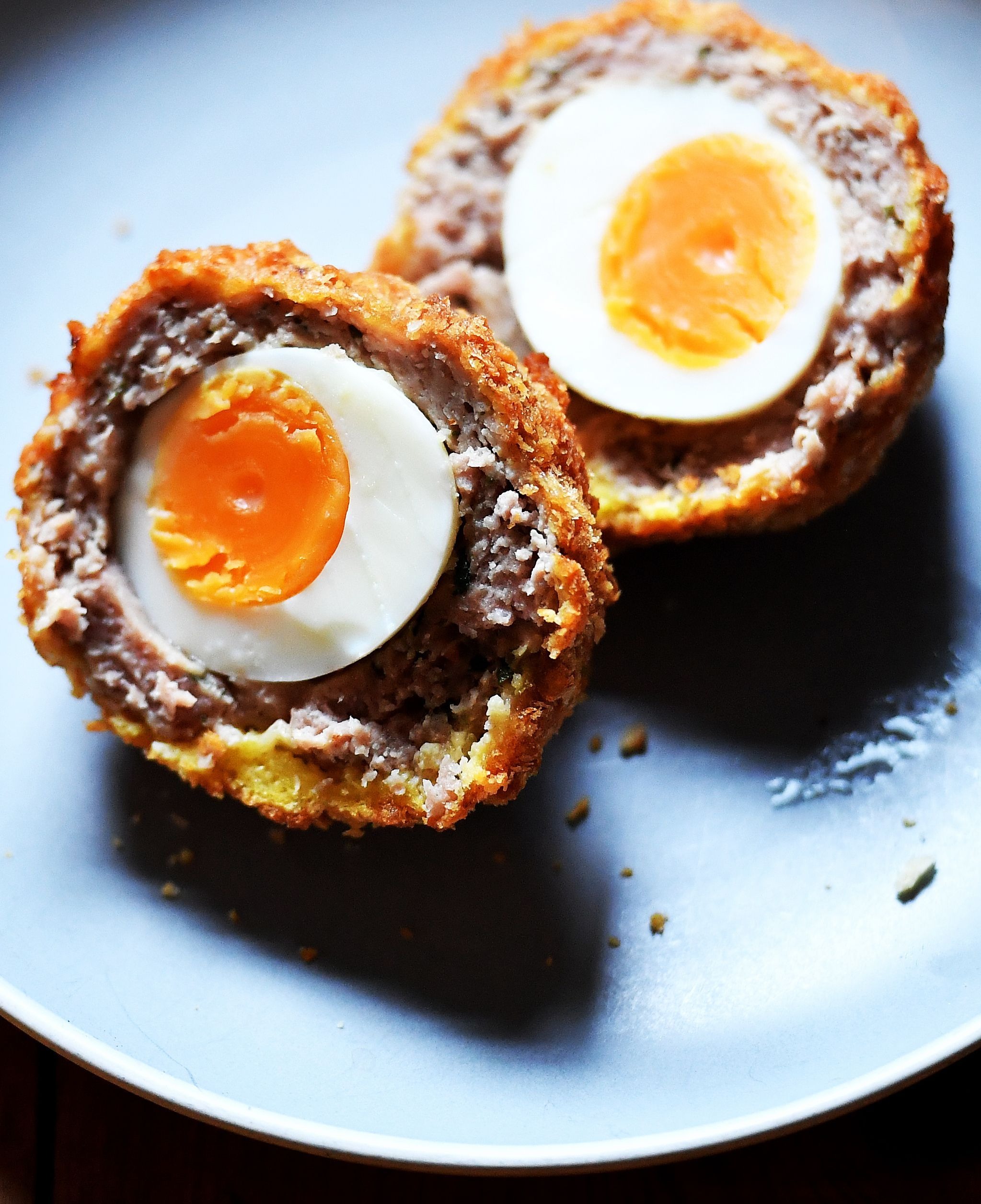 Boozers last night hit the town to make the most of the loosening of restrictions – packing into outdoor bars to have a drink with pals.

England came out of a four-week lockdown on December 2 which forced all non-essential businesses to close including bars and restaurants.

Since Wednesday England returned to a tier-based system which meant the end of the shutdown and allowed places to reopen.

Across all tiers, all shops and public buildings can reopen.

All areas have to abide by the government’s message of hands, face, space with Brits facing new rules day-to-day which are expected to last until the end of March.

And in England, pubs and shops are preparing for a £1.5billion spending spree today – the first non-working day since lockdown ended.

High streets will be the busiest they have been all year — as the NHS prepares to take delivery of two million vaccine doses by the end of next week.

Shoppers are expected back in huge numbers on the first weekend following a month of lockdown.

The Sun Online has contacted the restaurant for comment.