THESE shocking maps show the Delta variant has spread further in just one week before Britain relaxes more Covid rules.

The maps of England reveal scientists have found the strain to be more than 90 per cent dominant in every authority in the country.

In the last fornight before Covid restrictions lift further in England, the Delta variant has further took hold of the country. The dark areas show where the strain is dominant

In most areas, it is 100 per cent dominant, meaning every single Covid infection screened is caused by Delta.

The map confirms Delta has the UK in its grip and is fuelling the third wave.

Experts at the Wellcome Sanger Institute have produced the map every week, painting a picture of how rapidly the strain spread across the country over a few weeks.

Delta was first detected in the UK in mid-April.

It was one of three first seen in India that arrived on British soil around the same, but took off at a much more rapid rate.

Its biological advantage of being able to spread faster than any other variant allowed it to become rampant even with some restrictions still in place.

The Wellcome data highlights where there are hotspots of Delta based on the number of detected cases there per week.

It’s not a full representation of case numbers because it only includes swabs that are genetically screened – around 80 per cent of all positive cases.

It suggests the South West has a number of Delta hotspots. 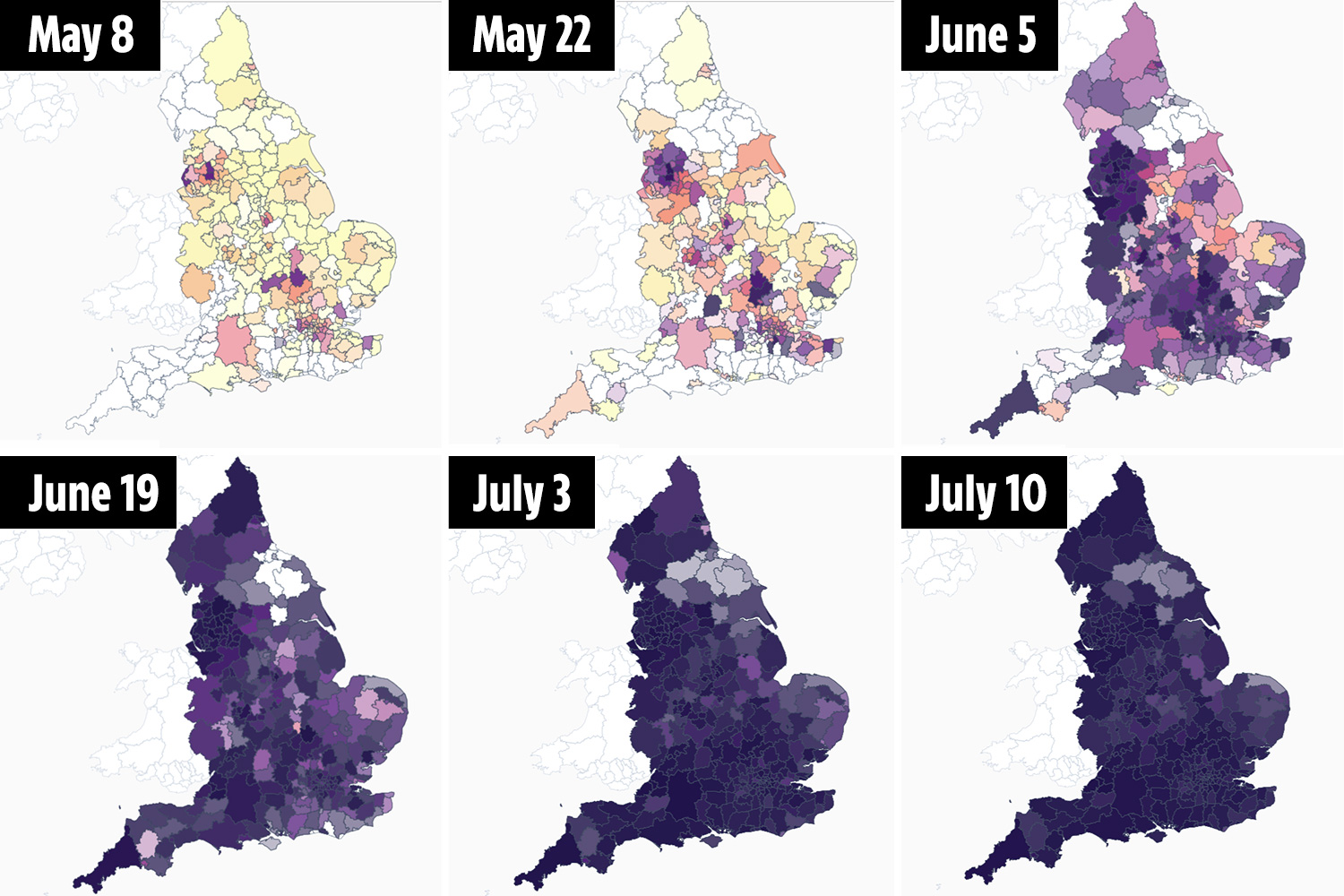 How the Delta variant has spread over the past two months. The maps show how dominant Delta is in each area, ranging from white, to yellow, organe, pink and purple 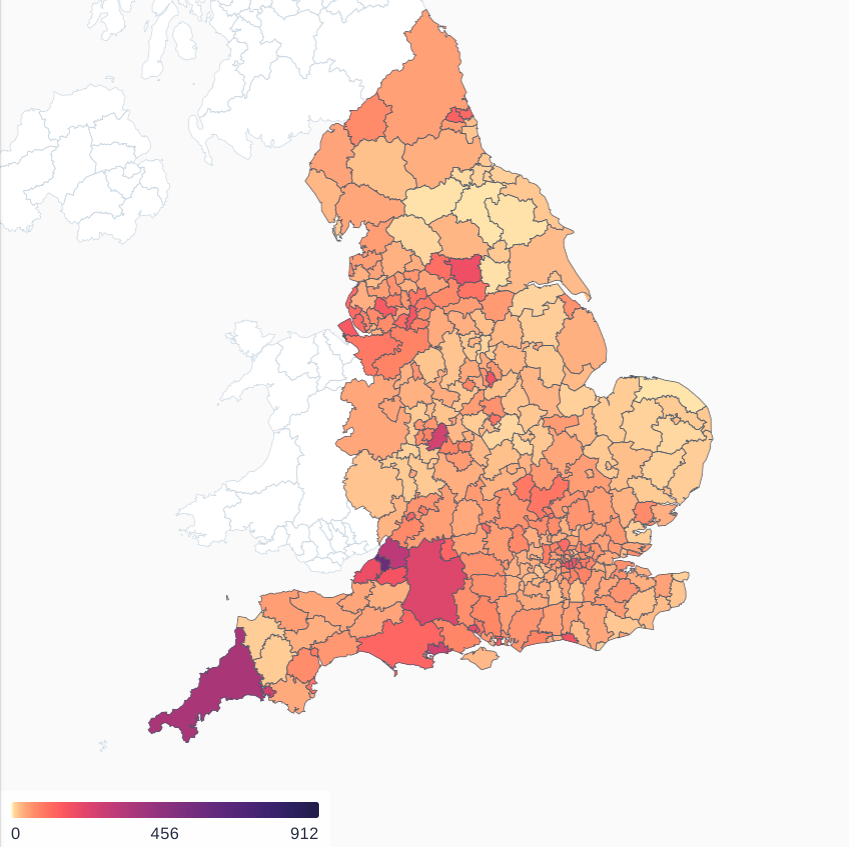 Scientists are detecting more cases of Delta in Bristol than any other part of the countryCredit: Wellcome Sanger Insitute

Bristol is currently recording the highest number of Delta cases per week, at 565. The Government coronavirus dashboard says the city is recording 624 new cases per 100,000.

Nearby South Gloucestershire is reporting 312 Delta cases per week.  It’s infection rate on the Government dashboard is 559 per 100,000.

Around 245 cases of Delta are being seen in Birmingham each week. It’s infection rate on the Government dashboard is 472 per 100,000.

Meanwhile, many of the areas in the North West that have been at the epicentre of the Delta outbreak for weeks have seen a calming of cases.

It comes as data from the Government dashboard shows that South Tyneside currently has the highest cases compared to its population size.

Redcar and Cleveland has the second highest rate of 1,121, and has the fastest growing rate in England, according to analysis by PA.

PA also reveals that of the 315 areas in England, 92 per cent have seen a week-on-week rise in rates.

There are also renewed warnings about the pressure on the NHS, which is now seeing the impact of the third wave.

Some trusts in England have seen the number of inpatients reach a third of the level seen at the second wave peak.

South Tyneside & Sunderland Foundation Trust, with the highest Covid case rate, reported 78 patients with Covid-19 on July 13 – the equivalent of 31 per cent of its second-wave peak of 251.

It comes at a time when the UK starts easing more Covid restrictions to return to a life close to normal.

England is having the biggest change of all, with all mandatory rules lifted today, July 19.

Prime Minister Boris Johnson has appealed to people to exercise their new freedoms with caution, urging to “respect other people”.

Labour leader Sir Keir Starmer accused the Government of being “reckless”, saying it was a “mistake” to lift all the remaining restrictions in one go when infection rates are “going through the roof”.

The PM warned daily cases would pass the 50,000 mark on “Freedom Day” – a record which was met on Friday.

Prof James Naismith, Director of the Rosalind Franklin Institute, and University of Oxford, said: “With nearly 52,000 cases we are less than one doubling away from 100,000.

“We have not plateaued at 33,000 [as suggested by one study], in fact we are heading into the unlocking with a large and rapidly growing wave of cases.

“We can expect pressure on hospitals to grow and become apparent by early August.”

Professor Neil Ferguson – whose modelling led to the first lockdown in March 2020 – said cases could reach 200,000 before the current wave of the pandemic finally peaked.

That could result in 2,000 hospital admissions a day leading to “major disruption” and further backlogs in NHS services.

But Prof Ferguson, of Imperial College London, added that it looked like people currently being admitted to hospital were not as severely ill as those in December and January, with the mortality rate “much, much lower”.

Professor John Edmunds, of the London School of Hygiene and Tropical Medicine, said the summer wave was likely to be “long and drawn out”.

Meanwhile in Scotland, restrictions have been eased but not lifted fully.

The whole of the country has dropped to the lowest level of its five-tier system with social-distancing reduced to just one metre, although face coverings remain mandatory in shops and on public transport.

First Minister Nicola Sturgeon also emphasised the need for caution and said talk in England of “Freedom Day” was “not sensible”.

It follows a series of rule changes in Wales which came in on Saturday, with a last lift planned for August 7, while in Northern Ireland regulations are expected to ease from July 26.

Lockdown easing will spike hospitalisations and deaths but ‘no perfect time to open up’, says Prof Callum Semple