The ABCs of an overdose: What to do when drugs go wrong

Would you recognise the signs of an overdose? (Picture: Getty Images/iStockphoto)

When it comes to drugs, the safest approach is not taking them at all.

But if you are going to get high, whether that’s on ketamine, cocaine, MDMA, or whatever else you can get your hands on, it’s vital you know what to do if things go wrong.

Do you know the signs of an overdose? Do you know what to do if your pal is having one?

This is essential knowledge that could save a life.

The good news is that once you’ve got this information down, it’s easy to remember and could make a huge difference.

Ahead, Maria Langan, a critical care nurse and a member of the senior harm reduction team at The Loop, breaks down the ABCs of an OD.

Signs of an overdose

‘The symptoms of an overdose are dependent on the substance or combination of drugs taken, however, there are key life threatening signs and symptoms to be aware of,’ Maria tells Metro.co.uk. ‘Initial changes in somebody may be subtle, but should not be dismissed. Often, it is those closest to someone who pick up on these changes and should trust their instincts to be alert to further signs.

‘Common side effects of intoxication are nausea and vomiting, often associated with abdominal pain. If these symptoms are prolonged they risk dehydration, starvation, and further damage to the lining of the stomach risking ulceration and vomiting blood.

‘More sinister signs and symptoms should also be considered and acted on.
Look, Listen and Feel (if safe to do so). Do not put yourself in danger.

‘Your safety is paramount in being able to assist someone, so always get more help.

‘Do not be afraid to escalate any concerns to trained personnel such as event security and medics. Do not be afraid to call emergency services (999). Provide accurate information to the operator. They will be able to guide through steps to support the person until ambulance services arrive. Ambulance staff are trained to deal with drug related emergencies confidentially and without judgement.

‘The following is a breakdown of what to look out for and seek immediate help if you notice any of these signs.’ 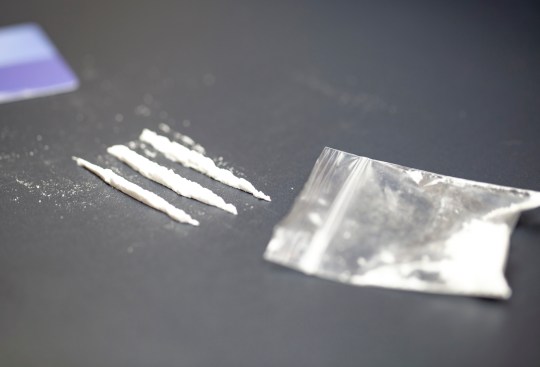 ‘The symptoms of an overdose are dependent on the substance or combination of drugs taken, however, there are key life threatening signs and symptoms to be aware of,’ says Maria (Picture: Getty Images)

Maria notes: ‘Is the person alert and orientated or have they become confused or agitiated? Are they drowsy, less responsive, fitting or unconscious?

‘Have they experienced feeling dizzy or faint? This could be a result of low blood pressure associated with dehydration or multiple drugs, such as GHB, cocaine, and ketamine.

‘Are they maintaining eye contact or appearing glassy-eyed? Opiate use is associated with smaller, constricted pupils, becoming ‘pin-point’ at higher doses, while large, dilated pupils can be caused by stimulant use at higher doses.’

Have you noticed a change in the person’s breathing? Has it slowed down or become rapid?

‘Slow or absent breathing is associated with overdose of drugs that depress the central nervous system, diminishing the trigger response to breathe’ says Maria. ‘This is associated with alcohol, GHB, opiates or benzodiazepines overdose, and will lead to death if not acted on immediately.

‘Rapid breathing is a sign of excess demand on the body in an attempt to expire toxins, and supply oxygen. It is more associated with stimulant use, dehydration or diabetic emergency.’

Check to see if they are snoring or gurgling, or if their breathing is noisy or wheezy – drugs with a depressant effect on the central nervous system can affect someone’s ability to swallow and maintain a clear airway, putting them at risk of choking on saliva or vomit.’

Check their skin – has there been a change in their complexion or their skin’s temperature?

‘Pale or bluish tone around lips or fingertips is a sign of lack of oxygen in the blood, associated with slow breathing or airway obstruction,’ Maria explains. ‘This is life threatening and needs urgent medical treatment. The skin may feel cool and clammy. Pale skin is also associated with low blood pressure.’

Hot, red, or sweaty skin can also be a warning sign, associated with stimulant overdose.

‘More serious overheating (hyperthermia) with hot dry skin (not sweating) could be a result of severe dehydration, and MDMA toxicity,’ Maria says. ‘This can result in life threatening illness, and even death.’

If someone has a high temperature, do what you can to reduce it, such as taking them outside a venue and using ice packs. If their temperature reaches 40°C or more, call for medical assistance.

Find out what drugs the person has taken – and any medication that they are taking.

Maria says: ‘Have they taken a combination? Often mixing stimulants and depressant drugs may counteract the effects of both, nevertheless, the body has to metabolise them and it can result in more harmful byproducts.

‘Equally, what drugs have they not taken? Being intoxicated may make someone vulnerable to neglecting self-care and management of a health condition. Someone may have missed doses of regular inhalers, insulin or medications. Vomiting will also affect the absorption of ingested medications, limiting their effect.

If someone has taken their insulin and is vomiting, they are at risk of diabetic emergencies from low blood sugar levels risking seizures, coma and death.

‘Alternatively, missed doses of insulin risk dangerously high blood sugars. They may feel really thirsty and be passing a lot of urine, resulting in severe dehydration, again risking seizures and death if urgent treatment is not sought.’

Consider other environmental factors that could cause harm.

‘Intoxication at outdoor events carries risk of over exposure to the elements e.g. sunstroke; or hypothermia if wet and cold in inappropriate clothing,’ says Maria. ‘Indoor events risk overheating. Dancing all day and night will lead to dehydration and exhaustion.

‘Large crowds may become overwhelming if intoxicated, making it easier to get lost from friends and may render someone vulnerable to additional dangers.

‘Intoxication may result in severe injury to oneself that may not be recognised. Pain from an associated injury may be diminished due to anaesthetising or dissociating effects of drugs such as alcohol or ketamine.’

This article is a part of High Alert, a campaign from Metro.co.uk and drug checking organisation The Loop. To find out more about their 2021 harm reduction campaign and how to reduce the risks of drug use, click here.