CORONAVIRUS cases have hit a ‘record high’ in the UK as new Omicron strains circulate.

BA.4 and BA.5 have caused an uptick in infections, with many Brits experiencing new symptoms.

Many people catching Covid are experiencing a sore throat and a headacheCredit: Getty

Most people who have caught the bug in the last few months have had illness similar to a cold.

The Omicron strain has been found to be milder than others that came before it.

The mammoth rollout of vaccines across the UK has also helped to protect millions of Brits.

But as viruses evolve, so do the symptoms and the team at the ZOE Symptom Tracker App revealed the top 20 that people need to look out for. 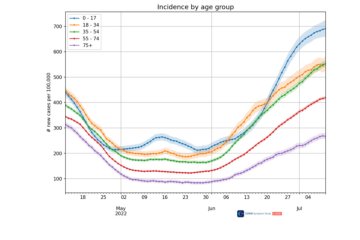 The team at ZOE said that over 57 per cent of people logging their symptoms on the app experienced a sore throat, while 49 per cent had a headache.

It’s a change from the three main signs that had previously been set out by the NHS which were a new persistent cough, a high temperature and a loss of taste and smell.

Around 40 per cent of people though are still experiencing some sort of cough.

But a loss of taste and change of smell have both become much more infrequent.

Now just 12 per cent of people testing positive have an altered taste, with only 10 per cent experiencing a change in smell.

Professor Tim Spector, lead scientist on the study, said: “Covid is still rampant in the population.

“So much so, that if you have any cold-like symptoms at the moment it’s nearly twice as likely to be Covid as a cold.”

Cases of the bug have reached ‘record highs’ in the last week, with data from the app showing that one in 15 people are now infected.

The BA.4 and BA.5 coronavirus strains are driving the current summer wave.

Descendants of Omicron, they are able to dodge immunity from prior infection and vaccines.

People who have already had Omicron are at risk of catching it again just four weeks after getting the bug, experts have warned.

However, there is no evidence jabs don’t protect against severe disease or deaths.

Prof Spector added: “Even if people have had a past infection and are fully vaccinated, people are still catching it.

“This is because there are multiple Covid variants coexisting at the same time (BA.2, BA.4 and BA.5).

“The good news is that case numbers won’t rise indefinitely and we’re already seeing a slight drop in numbers day to day.

“Although we all want to make the most of the good weather, people will need to decide for themselves whether going to large events, working from the office or using busy public transport is worth the risk.”

Hospital admissions are rising and almost at the level seen in January and March – when previous Omicron variants caused outbreaks.

Almost 2,000 patients are being reported as Covid positive per day in England.

Deaths remain relatively low, at around 65 per day in England.