The ultimate beginner’s guide to Pilates

The spine and core muscles are really important in Pilates (Picture: Getty)

Pilates is an incredible form of exercise that can help to improve core strength, stability and overall fitness.

But if you’ve never tried it before, there are some basic principles related to the discipline that you need to get your head around.

With the rise of online workouts and YouTube tutorials, it is more important than ever that you learn the basic rules before throwing yourself in – or you could develop bad habits, or even risk injury.

Hollie Grant is an award-winning Pilates instructor and the founder of Pilates PT. She has shared theories behind the key aspects of Pilates, which is extremely useful for beginners to understand:

‘You’ll often hear instructors say “find a neutral pelvis” or “make sure your spine is in neutral”, but if you don’t know what neutral is, that’s really difficult,’ says Hollie.

Hollie says most of us will be able to get ourselves into neutral posture, but we will just struggle to stay in it.

‘If we can work in neutral as much as possible in our classes, we are more likely to end up in a neutral position,’ she explains.

‘We don’t have a flat spine, they’re supposed to have curves which helps us to balance out the weight of our head and that we’re comfortable,’ says Hollie. ‘The curves also help us to move.

‘The curves should be relatively gentle, but because of our modern-day lifestyles (things like driving, texting, sitting at a laptop all day or because of pregnancy) those curves might change shape. We want to try to get back to neutral posture where we can.

‘For neutral pelvis, we want the hip bones roughly in line with the pubic bone. We also don’t want ribs to be sticking out. Eye line should be at eye level.

‘We want flat shoulder blades, not pulled forward or backwards. For the knees, we don’t want locked out or bent, just neutral (a bit soft).’

Most people say that the thing they struggle with most with Pilates is the breath. Hollie says it doesn’t have to be perfect, but you need to be breathing because muscles require oxygen.

‘Eventually, it will become habit,’ she says.

‘The Pilates breath is making the most of what happens to the muscles of the body when we breathe.

‘When we breathe in, our diaphragm pulls air into the body. When it contracts it pulls down and flattens and air is sucked in. As we exhale, the diaphragm relaxes and moves back to a dome shape as air is pushed out of the lungs. When that’s happening, we want to breathe as deeply as possible because the body requires oxygen.

‘If we don’t breathe deeply, we will need to breathe fast and shallow which puts the body under stress. We don’t want to be in that state. The deeper breaths calm the body down into the rest and digest state.’

While the diaphragm is working, Hollie says your other muscles are having to move. So, when we breathe in, the pelvic floor at the bottom of the pelvis lowers and the abdominals soften.

‘When we exhale and the diaphragm moves upwards, the pelvic floor lifts and the abdominals draw in,’ she says.

‘In Pilates we breathe in through the nose and out through the mouth, as deep as possible.

‘When we exhale we will feel the abdominals engage.’ 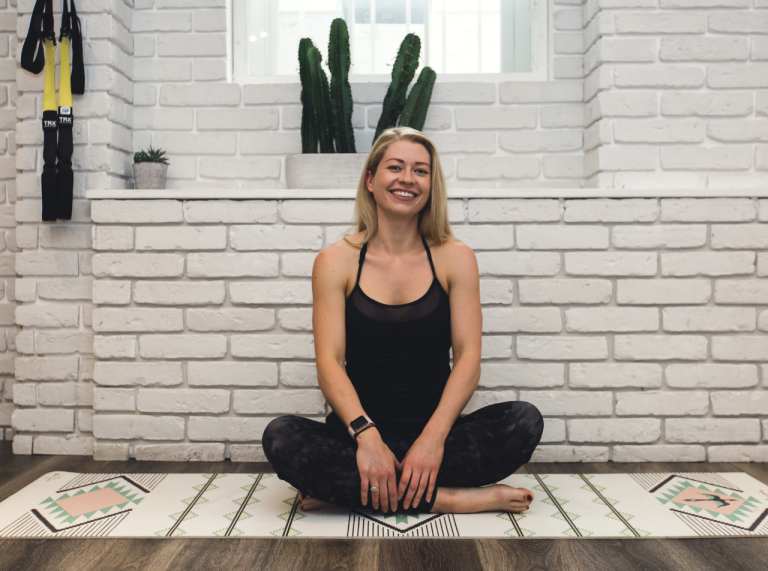 Hollie says that the core isn’t the be-all-and-end-all, and actually, everything needs to work together. But you will probably notice there’s a big emphasis on engaging the core to support and stabilise you in Pilates.

‘The core is going to stabilise your spine and when your spine is stabilised and in the optimal position, everything will work much better,’ says Hollie.

‘When we are thinking about the abdominal cannister, we have the pelvis, the spine and the rib cage. From the diaphragm down to the pelvis.

‘The one’s we have probably heard of the most are the Rectus Abdominis and there are two of them. These run down the centre of your tummy from the rib cage to the pelvis. These are your six pack muscles.

‘But, to have a visible six pack, you need a very low body fat percentage. And with that comes a huge amount of sacrifice. We are not here to build a six pack.’

Hollie explains that the transverse abdominis wraps around you like a corset.

‘It quite literally wraps all the way around the trunk and connects into the lower back,’ she adds. ‘When I ask you to engage your core, I’m looking for the cinching in of this muscle, or the feeling of somebody tightening the laces on your corset.

‘We have external obliques that help with rotation along with the internal obliques. These muscles cause rotation, lateral flexion and they can help stabilise and help with flexion.’

Hollie adds that we also have muscles at the back that support flexion – these are the muscles of the spine in the lower back.

‘All these muscles need to work together,’ she says. ‘If one of these groups are stronger than the other, this can change the shape of our spine and our posture.

‘We also have the pelvic floor at the bottom, this is part of your core. The pelvic floor along with the transverse abdominals are stabilisers. When we are trying to stay in neutral we are tightening our “corset” and pelvic floor lifting.’

Focus on the spine

If you see a doctor or physio about back pain, Hollie says they will probably tell you to do Pilates.

‘This is because, often, the root of back pain can come from muscle imbalances causing tension, changes to your posture which also causes tension and generally injuries to your spine,’ she says.

‘In the cervical spine in the neck we have extension, flexion and rotation. We can basically move our skulls a huge amount.

‘We then have the thoracic spine which we can flex, extend, rotate and laterally flex.’

As we move lower down the spine, Hollie says the movement becomes less and less.

‘The lumbar spine we can extend, flex, rotate and laterally flex,’ she says. ‘When we get to the base of the spine, there isn’t much movement. We have a little bit of movement around the hip bones.

‘Our spines are designed mainly to move in flexion (we do a lot of that leaning over laptops, cooking dinner, picking up children etc), extension (we don’t do a lot of this), rotation and lateral flexion.

‘We need to make sure we balance flexion out with other movements so we don’t get stuck in that position.’

‘With Pilates, we want to find out what our bodies look like from a posture point of view,’ says Hollie. ‘Where we are tight, loose, strong, weak and we can use that information to make the best use of our time.

‘If I know I have weak glutes, I need to make sure I’m including some glute work into my routines. Or if I already have strong biceps, do I need to spend much time strengthening those?’

Hollie adds that the body tends to change shape because of muscle imbalances and this is where muscles are not all equally strong, so they start to pull on our posture and change its shape.

‘If we think about modern day posture, many people sit at a desk all day or in a car and we find that we are always in hip flexion,’ says Hollie. ‘We will notice that the hip flexors are in a shortened position and they will just get short. They will get tight. Our glutes will be stretched and weaker as they aren’t being used.

‘This muscle imbalance changes the posture.’

So, Pilates might be just what your body is crying out for after weeks of working from home hunched over your computer.