THREE areas among England’s Covid-19 hotspots are in Tier 2 restrictions.

Their infection rates are higher than some areas subject to the most crippling Tier 3 rules, which ban the opening of restaurants and retail shops. 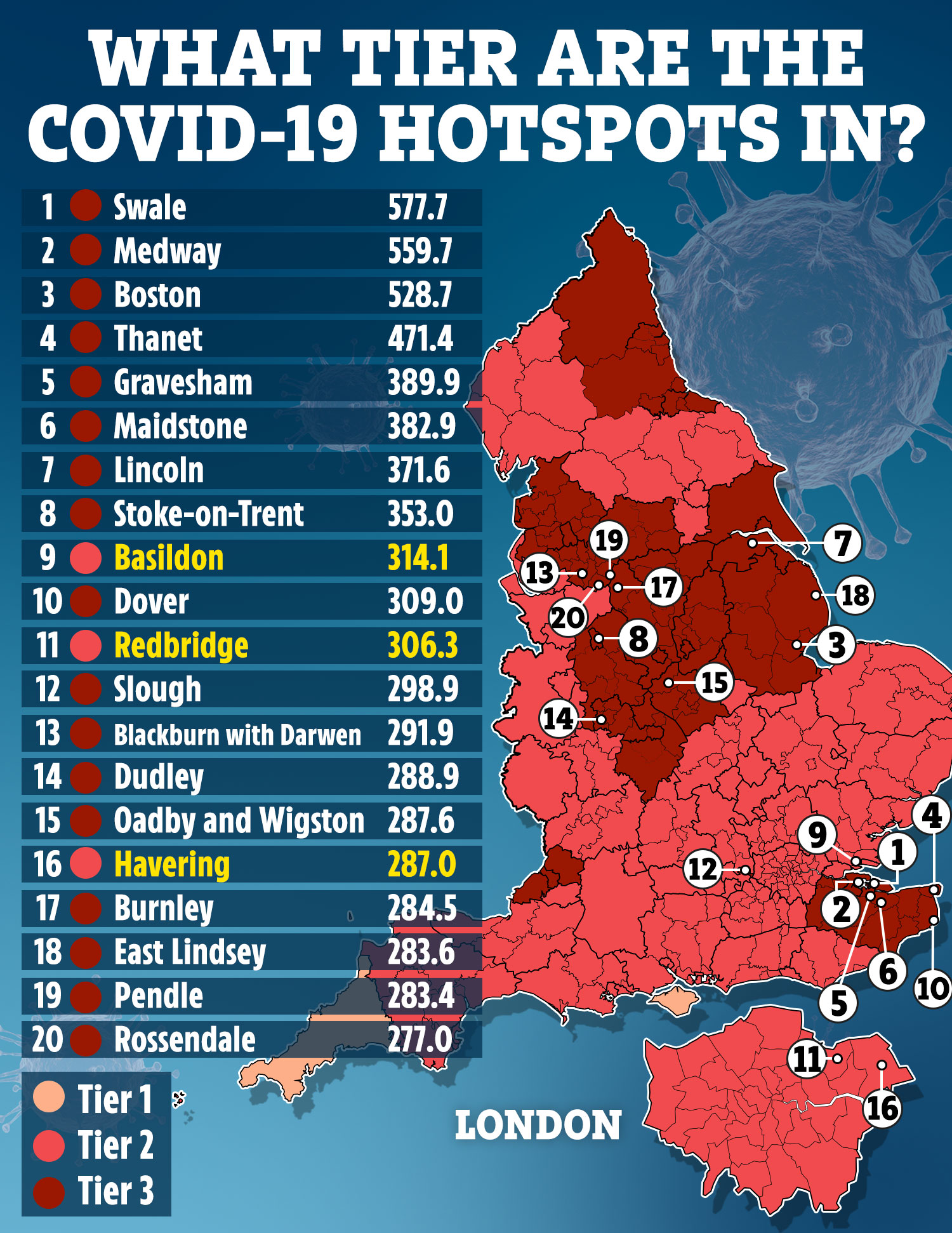 Basildon, Essex, has the ninth highest infection rate in the country, according to official data analysed by PA news agency.

But it has dodged Tier 3 and people can still meet each other outside in groups of six, and indoors with one other household.

Redbridge and Havering, both in London, have also avoided the most restrictive rules.

Where are infection rates the highest, and what tier are they in?

The top 20 areas are listed as the name, their infection rate, and tier level.

Meanwhile, some parts of England have to put up with a ban on seeing their friends and family in Tier 3, even though their infection rates are relatively low.

It includes Stratford-upon-Avon, which is 282nd out of 315 local authorities.

The town has an infection rate of just 60.7 cases per 100,000, but has been lumped together with the rest of Warwickshire under the highest alert level. 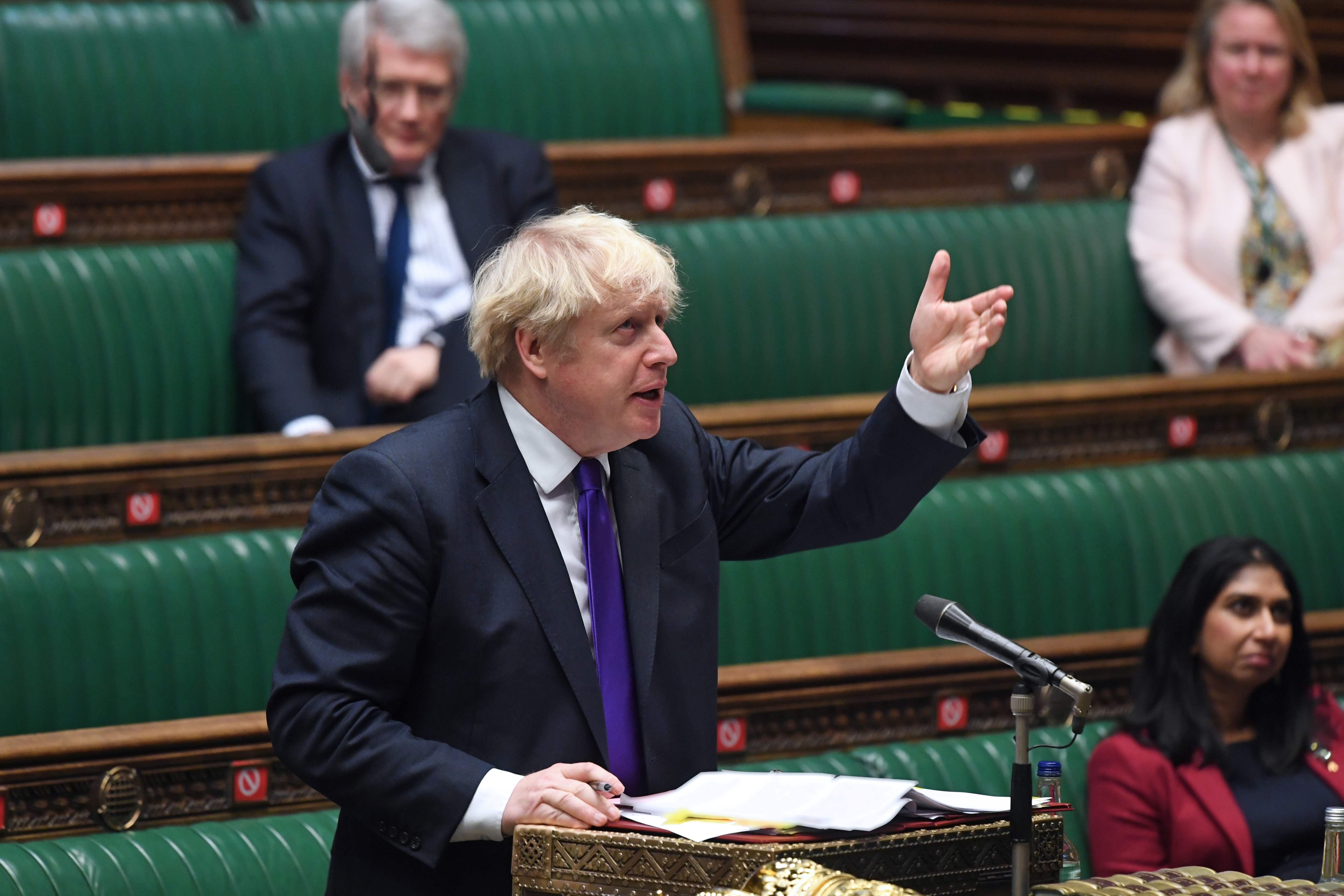 Boris Johnson said each location’s data will be looked at in “granular detail” for the first tiered system review Credit: AFP

How are tiers decided?

– case detection rates in the over-60s;

– the rate at which cases are rising or falling;

– the positivity rate – the number of positive cases detected as a percentage of tests taken;

– Pressure on the NHS, including current and projected occupancy.

The Government has said it needs to maintain flexibility to weigh the indicators against each other – such as whether hospital capacity in neighbouring areas is lower.

Another example given in the coronavirus winter plan is that case detection rates would need to be weighed against whether the spread of the virus is localised to particular communities.

The plan states “given these sensitivities, it is not possible to set rigid thresholds for these indicators, as doing so would result in poorer quality decisions”.

In the Commons on December 1, Tory MP Greg Clark for Tunbridge Wells said there were “vast differences in the rate of Covid” within Kent.

Boris Johnson replied: “We will look in granular detail at local incidents, look at the human geography of the pandemic and take account of exactly what is happening every two weeks, as I say.”

The first fortnightly review of the tiered system, which came into place on December 2, will be on December 16.

The Prime Minister has reassured that “your tier is not your destiny”, and there will be opportunity to drop down a level if the data supports it.

But there are concerns no area will realistically move down, only up, in the lead up to Christmas.

It comes as data shows only nine local authorities in England saw Covid cases rise in the last week.

All locations with accelerating cases were in the south of England, with five in London.

The official data from Public Health England (PHE) adds more evidence that the second wave is starting to fizzle out.

Bracknell Forest, in Berkshire, saw cases increase the most, by 39 per cent. But its infection rate, at 88 cases per 100,000 people, is still relatively low when looking at England as a whole.

Medway, in Kent, was second, with a 22 per cent growth in cases week-on-week.

The five places in London where cases have increased were Bromley (up 12 per cent), Kingston upon Thames (up eight per cent), Lewisham (up 6.5 per cent), Haringey (up six per cent) and Camden (up 1.7 per cent).

London is in Tier 2, but like every other place in England, could be bumped up to Tier 3 if cases spiral out of control.

South-end-on-Sea, in Essex, recorded a jump in cases of 3.5 per cent. Its case rate hovers at the 128 mark.