THE UK is “worryingly close” to hitting 100,000 daily new cases – putting Brits at risk of Plan B, an expert has warned today.

Brits have been urged to take matters into their own hands to drive down infections and keep safe this winter.

The UK could soon be seeing more than 100,000 cases a day of CovidCredit: Getty

The ZOE Covid Symptom Study App recorded 92,953 new cases in the UK, from test data up to five days ago.

This is an increase of 14 per cent on from last week’s figures, with infections in the double jabbed continuing to rise.

Professor Tim Spector, lead scientist, said: “The ZOE data shows the UK could hit 100,000 new cases sooner than expected and with no sign of a Plan B or Plan C.

“The ZOE figures are consistently higher than the official confirmed daily cases because we get results from various sources, including self-reported lateral flow tests that are under-reported officially.

“With the confirmation of our estimates from the ONS’s fortnightly survey, it’s clear the government figures are a big under-estimate, and with the highest rates in Western Europe, there’s no room for complacency.

“With the UK government delaying any decision while hospitals fill up, it’s time to take matters into our own hands to address the worsening situation.”

The expert warned everyone must be vaccinated and keep wearing facemasks on public transport and crowded spots.

He said Brits should work more from home and avoid unventilated crowded events.

Prof Spector also urged anyone feeling ill to stay at home and tested.

He said: “There’s a lot of cold and flu out there making it harder than ever to tell the difference between a harmless cold or Covid.

“However, there are some symptoms that are very telling of Covid, particularly loss of smell and taste.

“If you feel ill, always check by taking a quick and easy Lateral Flow Test, even if you think it’s just a cold.”

The latest data also found cases are rising in all age groups across the UK, but the highest proportion is in the 0-18 year olds still.

However, in the last week there has been a rise in more vulnerable age groups – ages 55-75 – who are more likely to end up in hospital.

All regions of the country have seen an increase, with a notable rise in cases in the South West.

Last week doctors called on ministers to implement more Covid restrictions now, before it is too late.

The Government’s “Plan B”, which includes face coverings and working from home, has been ruled out for the time being.

But the British Medical Association (BMA) said the decision was “willfully negligent”.

It comes after a grim report warned the NHS will be overwhelmed by flu and Covid in a “twindemic” this winter. 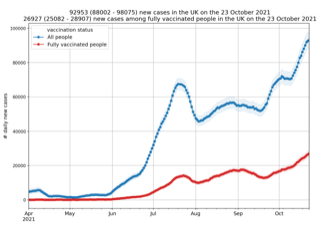 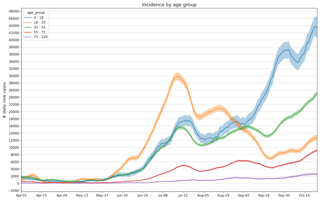 Signs in Europe are also showing that the influenza strain this year “could be severe” in the elderly.

If Covid hospitalisations remain at the level they are, and flu follows the same pattern as the years before the pandemic, the report warns the situation could become difficult.

The new modelling, from health analytics firm Airfinity, found the NHS could hit capacity to deal with both bugs by late January – in the worst case scenario.

If the flu season is the same as the last severe outbreak in 2017-2018 – when almost 50,000 cases were reported and hospital admissions hit 6,100 in a week, the “lockdown threshold” would arrive just after Christmas.

Dr Matt Linley, lead analyst at Airfinity, told the Telegraph: “Vaccines are doing a great job at keeping Covid-19 hospitalisations down but admissions are unlikely to drop significantly during winter as people are more likely to meet indoors.

“Flu is back and the consensus is that this year’s flu resurgence is expected to be severe and we could see up to 6,100 hospitalisations a week for flu alone.”