LOCKDOWN rules won’t be fully lifted until all over 50s have had a Covid jab, a minister hinted today, as a top scientists warned life won’t be back to normal until the summer.

Vaccines minister Nadhim Zahawi said the rollback of pandemic restrictions will be slow so we “never have to go back into another severe lockdown”. 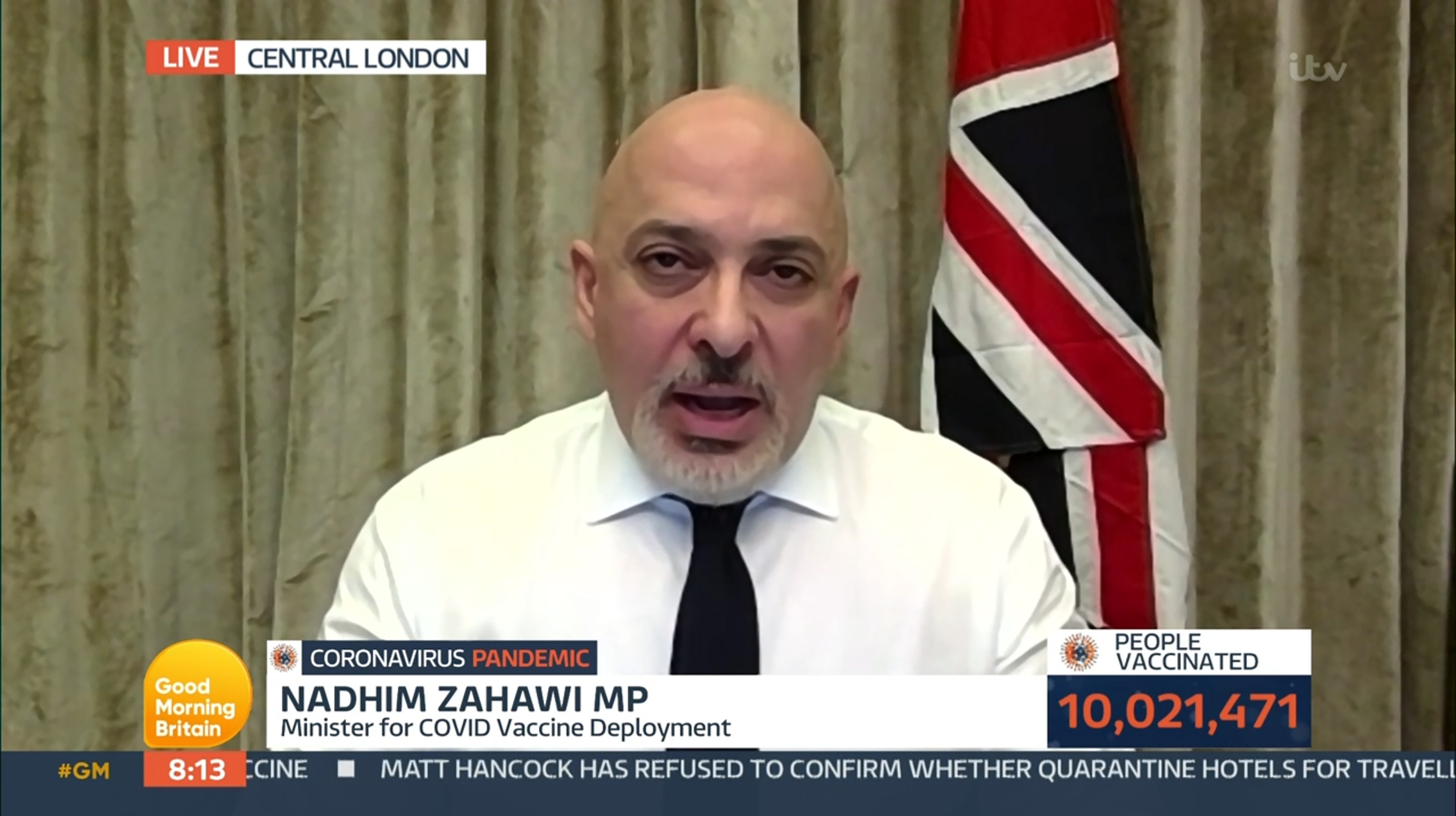 His remarks will alarm lockdown-sceptic MPs who are pushing Boris Johnson to speed up the rolling back of restrictions.

A key scientist advising the PM today insisted life could be “more or less back to normal by summer” if jabs targets are hit.

Rishi Sunak has reportedly complained Government advisers are “shifting the goalposts” on when curbs on daily life can be lifted.

The PM is set to lay out a “roadmap” for exiting lockdown during a speech on February 22.

Mr Zahawi insisted Britain is on target to jab the most vulnerable groups, including all those over 70, within the next 11 days.

But he warned even though that group accounts for 88% of deaths, ministers still won’t be able to significantly ease restrictions.

He said: “We want to reopen schools, reopen our economy, get our lives back, but never have to go back into another severe lockdown like the one we’re all experiencing and suffering from at the moment.

“You’ve got to make sure that your vaccination programme has protected the top nine categories in phase one – that is 99% of mortality.”

Rishi Sunak is said to be worried scientists are ‘moving the goalposts’Credit: Reuters

Mr Zahawi said there is evidence that has “so clearly demonstrated the danger of Covid to those most vulnerable top nine including of course the over 50s”.

He added: “We’ll do that as quickly as possible and you’ve seen the progress to date.

“But of course the PM has made it very clear that on February 22 there will be a roadmap for how we intend to reopen the economy, beginning with schools on March 8 and then gradually the rest of the economy.

“You have to set yourselves targets and you hope everything goes well but these things are changing.”

Professor Andrew Hayward, a member of the Sage group that advises the Government, also said jabbing over-50s will prove the key benchmark.

He said: “Once the most vulnerable people, particularly those over 50 and those with chronic illnesses, are vaccinated then yes I think we can see a significant return to normality.

“We will see a phased opening up and more or less back to normal by summer.”

The Government hasn’t yet set a target date for vaccination of all over-50s, but ministers hope to achieve that milestone later in the Spring.

There are around 32 million people covered by the top nine categories.

Mr Zahawi said it then takes around three weeks for high protection against the virus to kick in, at which point restrictions could be lifted.

His remarks come after Mr Sunak reportedly complained the PM’s scientific advisors are “moving the goalposts” on when lockdown can end.

The Chancellor is apparently concerned number of cases, not just hospitalisations and deaths, will now be used as a key metric for easing restrictions.

According to the Daily Telegraph Mr Sunak told allies the UK was approaching a “fat lady sings” moment when lockdown must be lifted.

An ally of the Chancellor said: “This needs to be the last time we do this. This is the fat lady sings moment. We can’t lock down again.

“Rishi is concerned that the scientists have been moving the goalposts in recent weeks.

“It’s no longer just about hospitalisations and protecting the NHS but cases and case numbers.”

The source added that the “talk has switched to becoming Covid-free” following the emergence of worrying, highly transmissible variants of the virus discovered in Kent and South Africa.

But other sources close to the Chancellor denied that he had ever made such remarks.

Vaccines Minister Nadhim Zahawi warns there are 4,000 different variants of Covid as he outlines how the govt decides when to lift lockdown

The Chancellor is being backed by Tory MPs from the Covid Recovery Group who want the lockdown to be lifted as early as possible.

Its chairman Mark Harper told TalkRadio: “It seems to me based on the vaccine rollout, the hugely powerful efficacy of those vaccines, you’ve therefore got to get those rolled out and then unlock the economy and society.

“The chief scientific advisor has made it clear we’re not going to get rid of Covid, it’s going to be with us forever and I’m afraid some people are going to continue dying from it.

“We’re going to have to balance that, as we do each year with the flu, against the cost of locking down the economy.

“Actually I think most members of the public understand life comes with risk and you have to manage it sensibly in order to make the most of it.”