BRITAIN’S official coronavirus R rate has dropped below 1 for the first time since July, fuelling hopes that the third national lockdown could be lifted.

The official figure – which represents the number of people an infected person will pass Covid onto – is now between 0.7 and 0.9, Sage said today. 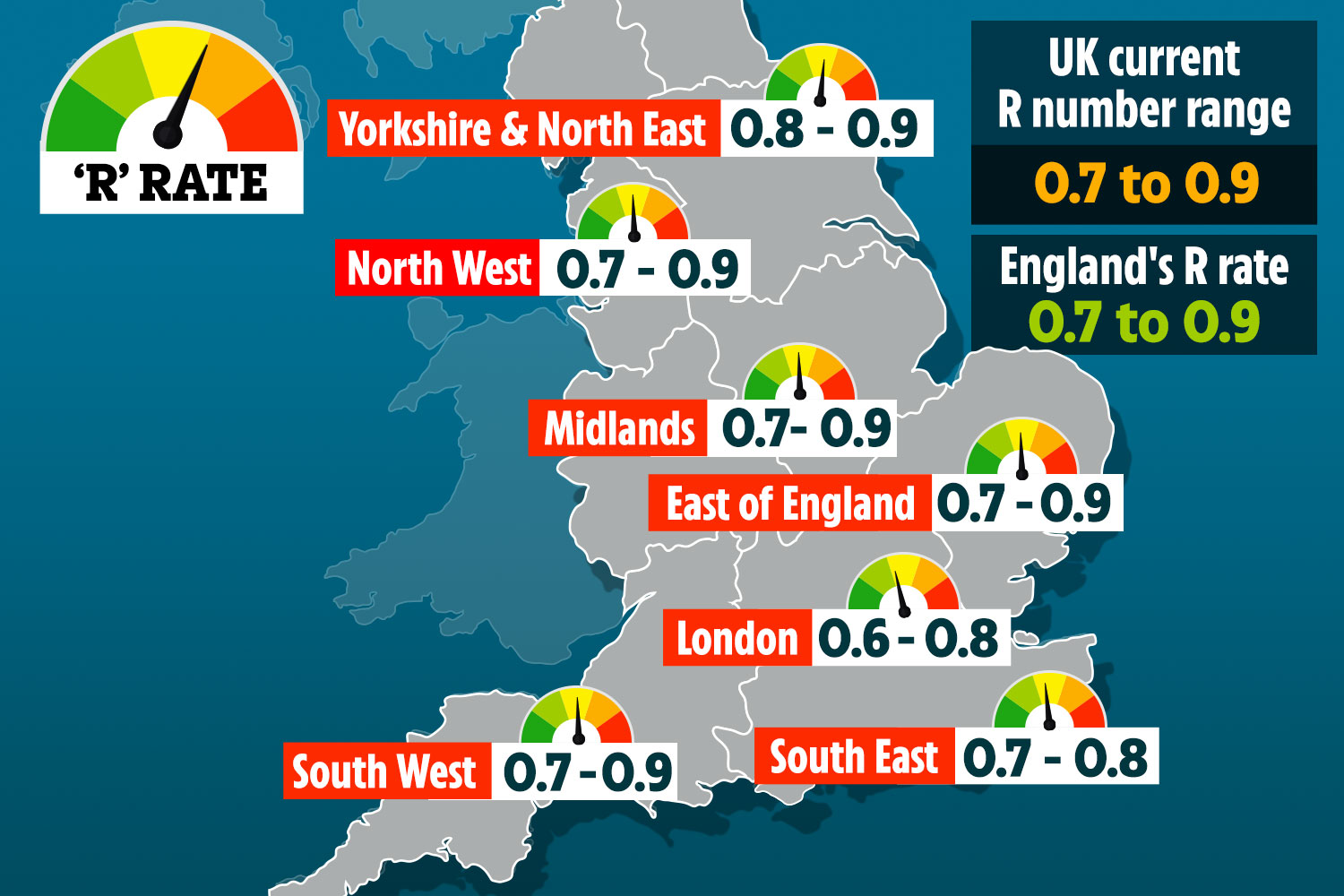 Levels haven’t been this low since July last year, fuelling hopes that lockdown restrictions could be lifted.

When the R is below 1, it means transmission is low and the epidemic is shrinking – but greater than that number suggests it’s growing.

The data from Sage states that the R is between 0.7 and 0.9 across the UK and the same in England, with some slight regional variations.

The announcement from Sage comes after experts at the ZOE Symptom Tracker app estimated that the R rate is currently at 0.8.

The experts said that cases are falling faster in England and Scotland and that London has the lowest R rate in the country at 0.7 – suggesting that numbers are falling in the capital.

Sage said: “Estimates of the R value are below 1 in all NHS regions of England.

“Although R is below 1 in all regions, there may be more variation in transmission within each region.

“These estimates mean we are confident the epidemic is shrinking across all NHS England regions.

“However, prevalence of the virus remains high, so it remains important that everyone continues to stay at home in order to keep the R value down, protect the NHS and help save lives.”

The estimates are based on the latest data available up to February 8.

This includes hospitalisations and deaths, as well as symptomatic testing and prevalence studies.

Sage stated that R is a lagging indicator and that the estimates “cannot account for the most recent policy changes, nor changes in transmission that have not yet been reflected in epidemiological data.”

Looking at the estimates from Sage on a regional basis and London has the lowest with an R rate between 0.6 and 0.8.

The South East has the second lowest with a rate between 0.7 and 0.8.

It’s followed by the East of England, the Midlands, and the South West, which all have rates between 0.7 and 0.9.

The North East and Yorkshire has the highest with an R rate between 0.8 – 0.9.

What does R rate mean?

It’s also worth pointing out that the R0 is a measure of how infectious a disease is, but not how deadly

Further data from the ZOE app released today states that cases of the virus have dropped by 27 per cent in the last week.

The experts revealed that there are currently around 14,818 people in the UK with symptomatic Covid – a fall from 20,360 cases a week ago.

The figures suggest that since the peak of 69,000 new cases a day on January 1, cases have dropped by around 79 per cent.

Around one in 233 people in the UK are believed to have symptomatic Covid and the study lead, Professor Tim Spector, today said that vaccines will work to our advantage in driving down infection rates.

So far in the UK over 13 million people have received their first dose of either the Oxford/AstraZeneca jab or Pfizer/BioNTech jab, with over half a million having had their second.

Prof Spector said: “Based on the ZOE data and our predictions we are soon to be in the same place we were in early June, with the advantage of having a large proportion of the population vaccinated which could mean good news in terms of lifting some restrictions sooner rather than later.

“By March 8 we should have less than 1 in 740 people with symptoms allowing us to get kids back into the classrooms and starting to allow people to exercise and meet, at least outdoors, where the risk of transmission is much lower.

“Until then it’s important to keep following the guidelines, even if you have had a vaccine, and keep reporting symptoms and getting tested even if your symptoms are not typical.”