We’re ‘collapsologists’ living off the land in case civilisation crumbles

NO bills, no mortgage, an endless supply of homegrown grub and even a hot tub to relax in – welcome to the world of two Brits prepared for the end.

Essex vets Matthew and Charis Watkinson gave up the rat race for the good life in the Welsh countryside after reading about ‘collapsology’, a movement based around the theory that society as we know it could fall apart. 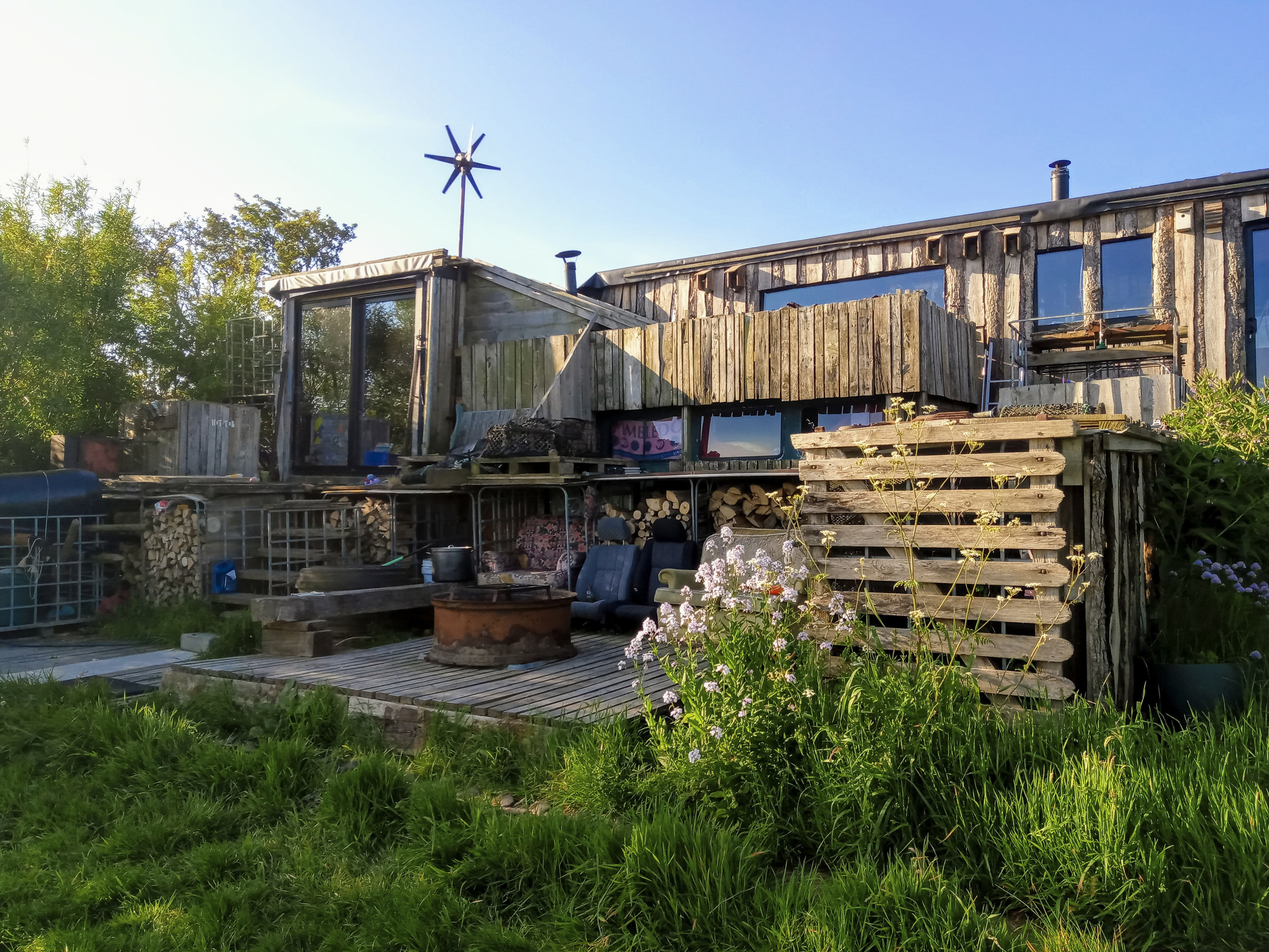 The Watkinsons’ wooden house in the Welsh countryside 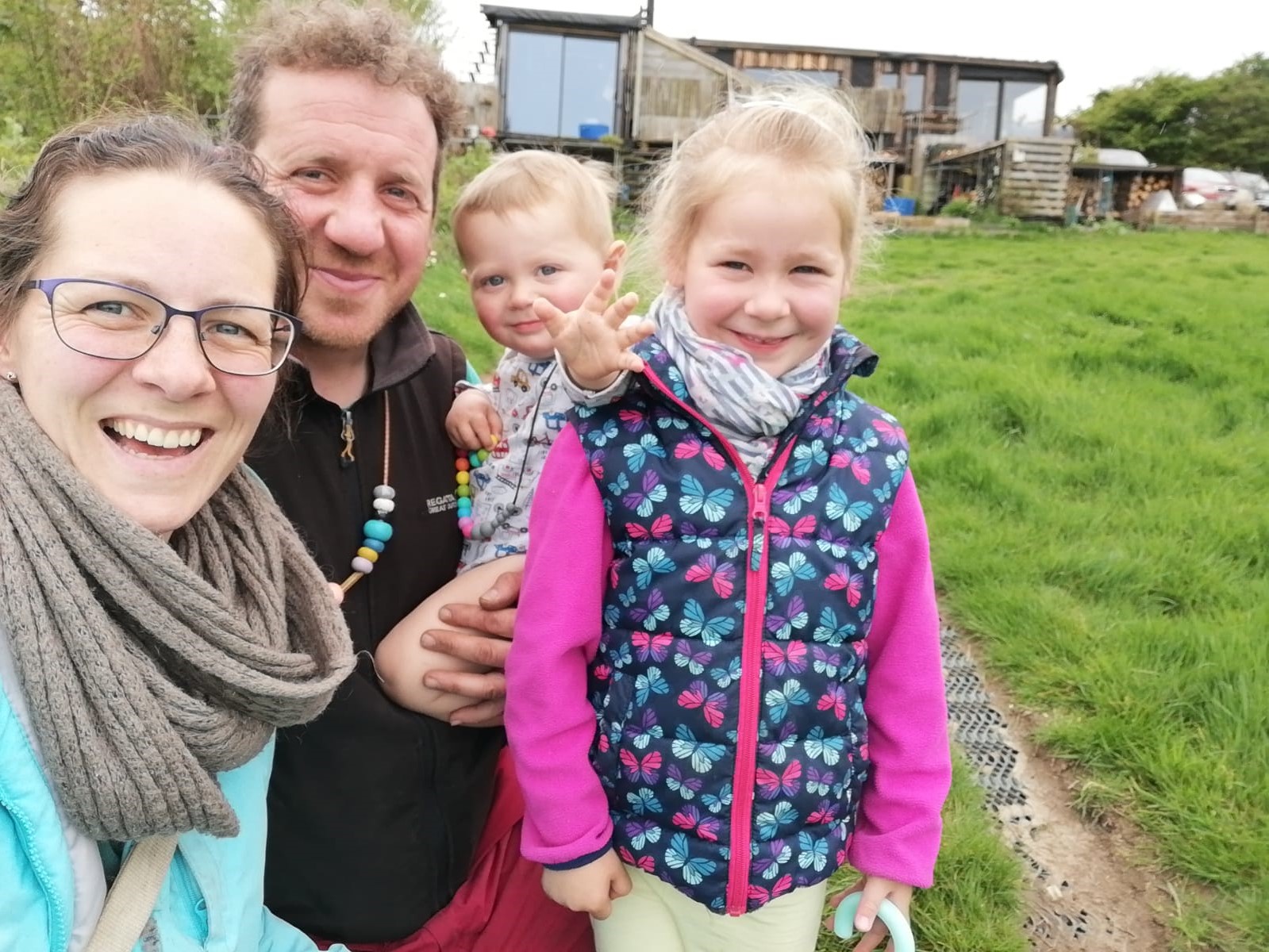 Rather than relying on their £30,000-a-year jobs to support themselves, they instead grow their own fruit and vegetables, rear up to 140 chickens and produce all their own electricity.

They prepare meals on a horse poo-powered cooker while kids Elsa, six, and Billy, two, help.

“The coronavirus showed how we’re never that far away from panic. Everybody is so reliant on somebody else providing everything for them that when things did get a little bit tense the results were scary.

“And when we saw that, we were extremely glad we’d come here.” 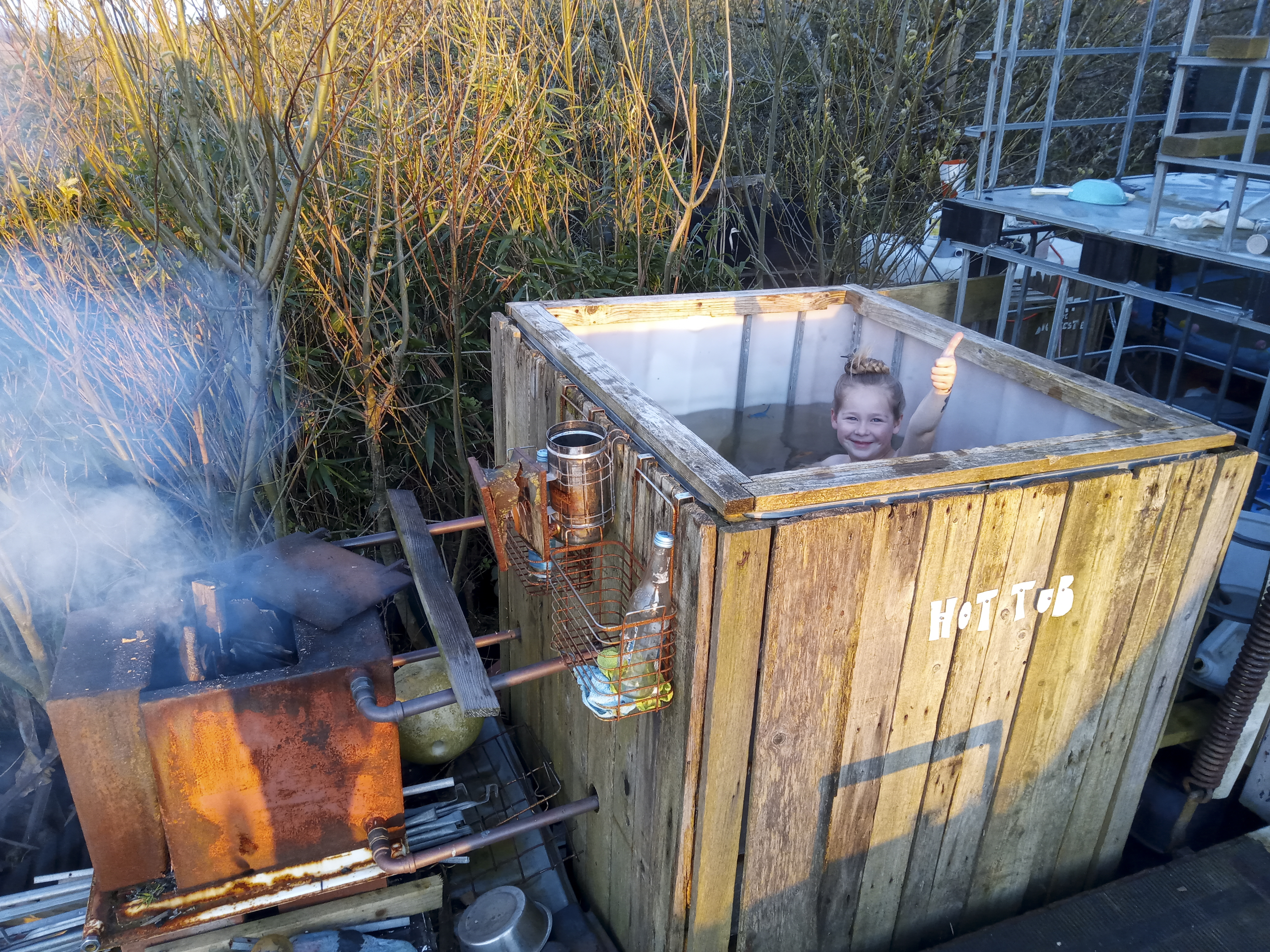 Elsa in the wood-fired hot tub on the farm 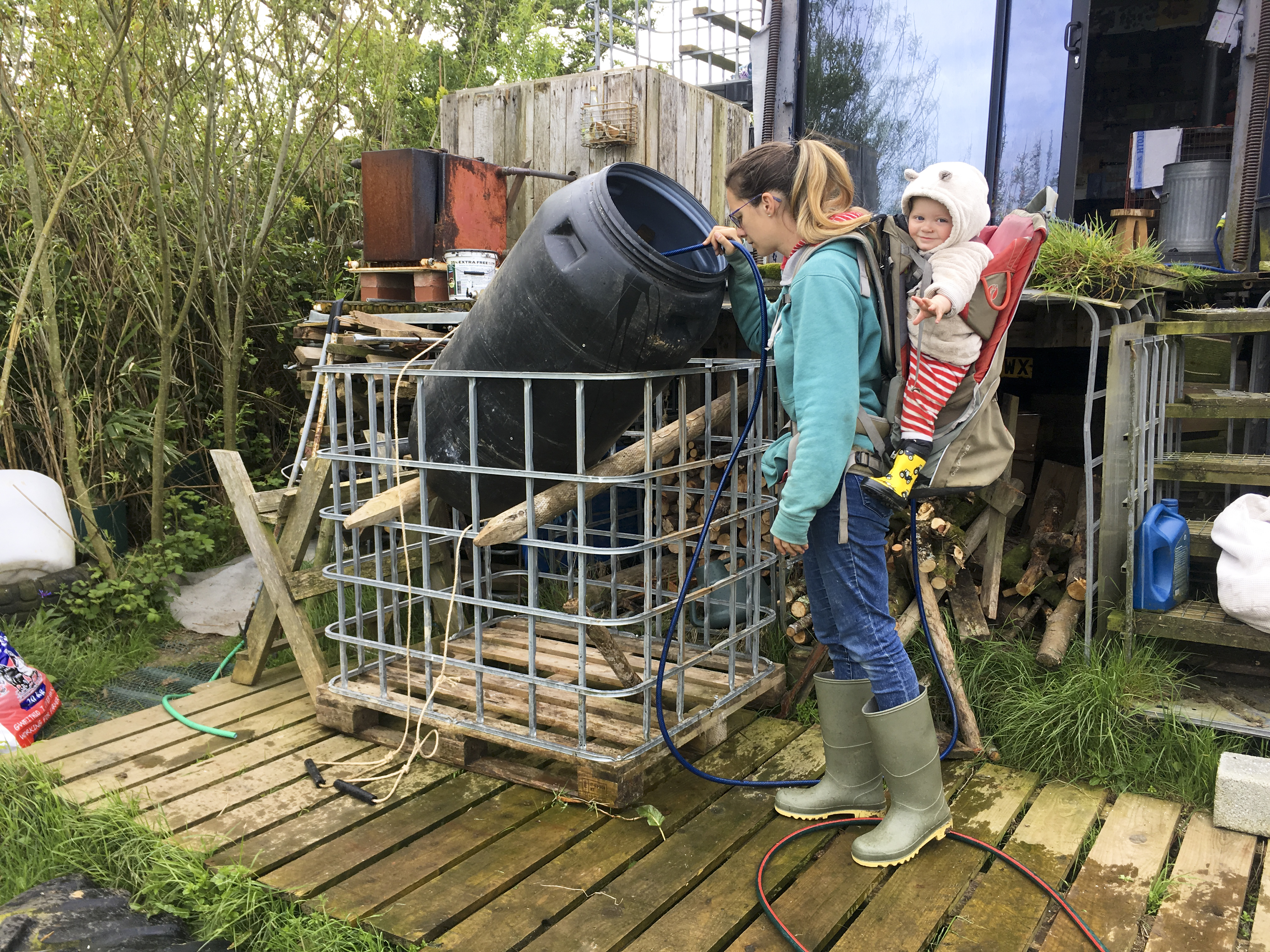 Matthew and Charis’ way of life has become the new frontier for many as the coronavirus pandemic has sparked a huge rise in people seeking advice on how to prepare for the possibility that civilisation could collapse.

While the idea is far from a new one – just ask the Mayans or the Romans – France witnessed an explosion in students of la collapsologie, or collapsology, in the wake of the virus last year.

In the UK, retailers selling basic survival goods saw sales rocket up to 5,000 per cent, while others want those who live self-sufficiently like Matthew and Charis to teach them how to not depend on others to survive. 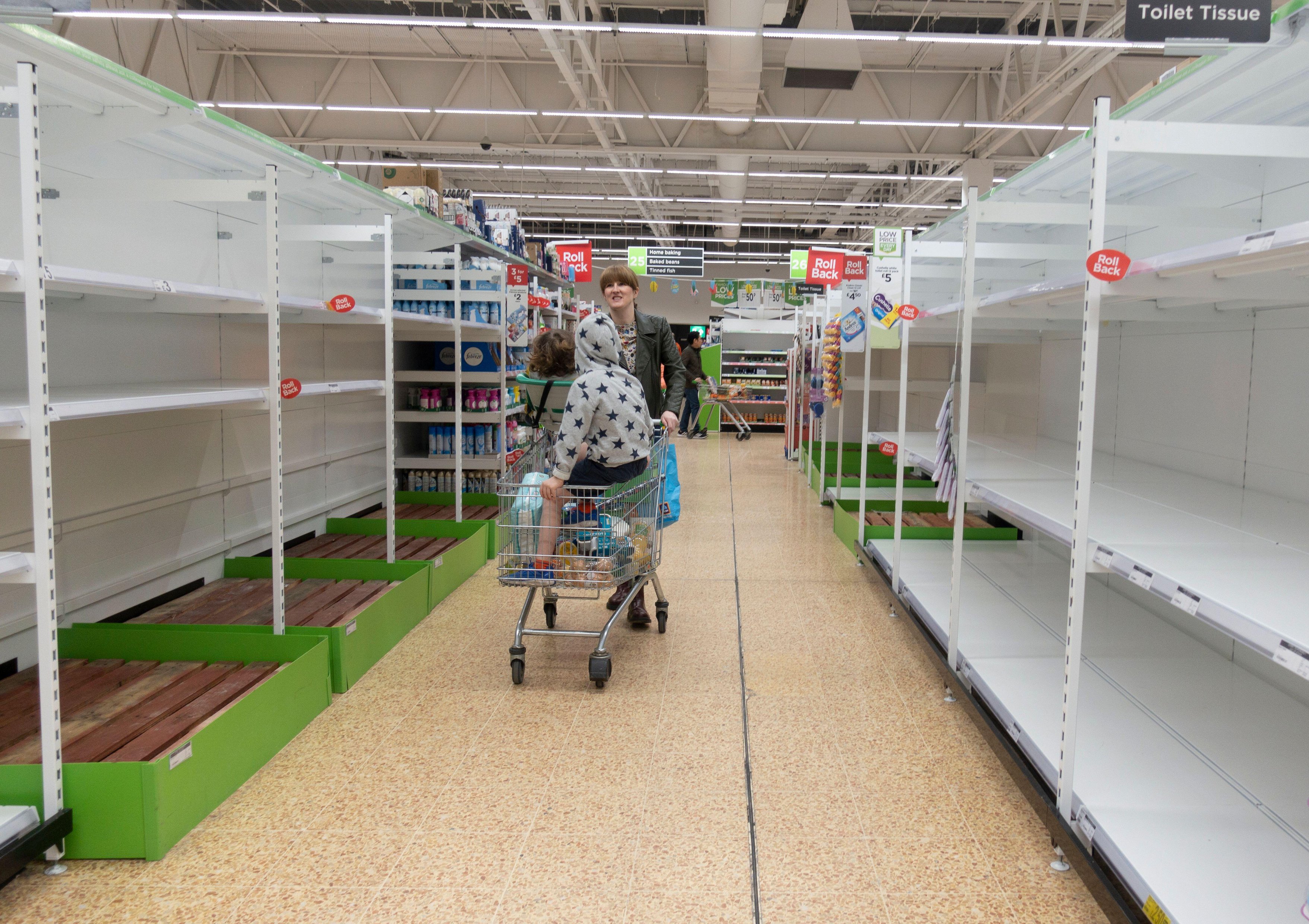 The bare shelves of supermarkets during the start of the pandemic proved even huge food outlets can’t always be relied on, says MatthewCredit: Alamy Live News

Prepare for the worst

Doomsdayers. Survivalists. Preppers. There are countless names and variations for those who believe the end is nigh.

Many are dismissed as conspiracy theorists. But while collapsology has its roots in the same idea, the reaction on how to cope is different.

Rather than bunkering down alone in an abandoned nuclear facility and preparing to weather the storm alone, the movement aims to save society as a society – starting rural, communal lifestyles while welcoming communication with the wider world.

One collapsology Facebook group in France saw its numbers reach 30,000 members during the first lockdown and the idea is turning mainstream thanks to support from senior politicians, respected authors and a popular Black Mirror-style drama series.

Collapsology warns of the possible fall of society as we know it as problems like climate change expose our unsustainable lifestyles.

The movement was born on the back of Pulitzer Prize-winning author Jared Diamond’s celebrated book Collapse: How Societies Choose to Fail or Succeed in 2005.

The work focuses on the effect environmental impacts – such as droughts, dwindling crop yields and swings in temperature – had on ancient civilisations.

However, Diamond also looks at the similarities those societies faced with today’s world – including environmental changes, the impact of climate change, hostile neighbours and trade partners.

The theory was further popularised by a 2015 book, How Everything Can Collapse, by Pablo Servigne and Raphaël Stevens.

Some of its supporters, like former French environment minister Yves Cochet, believe the coronavirus crisis is just a further sign of impending catastrophe.

People who follow the collapsology movement aren’t waiting for the apocalypse, nor believe the end of the world is fast-approaching.

More, they are expecting and preparing for the fall of our current civilised society.

Unlike doomsday preppers and other survivalist movements, collapsologists live among us in mainstream society and don’t intend to frighten people.

Rather, they work to prove the number of potential crises that could burst one day and explore what we can do to ease this.

People in the collapsology movement think about how we can prepare the new world to be built quickly and in the best way.

While the term is yet to truly take hold in the UK, thousands have been looking at becoming more independent since coronavirus hit.

“Our sales have gone through the roof, as high as a 5,000 per cent increase,” Lincoln Miles, 27, owner of Preppers Shop UK in Newquay, Cornwall, said last year.

“The supermarket panic buying in March definitely showed us how fragile it all is and how quickly everything can change.

“I think we only just avoided what could have been a real crisis, but the fact that it got so close to it made people wake up and realise we can’t rely on this because this could happen again.

“The fragility of the whole system was exposed.” 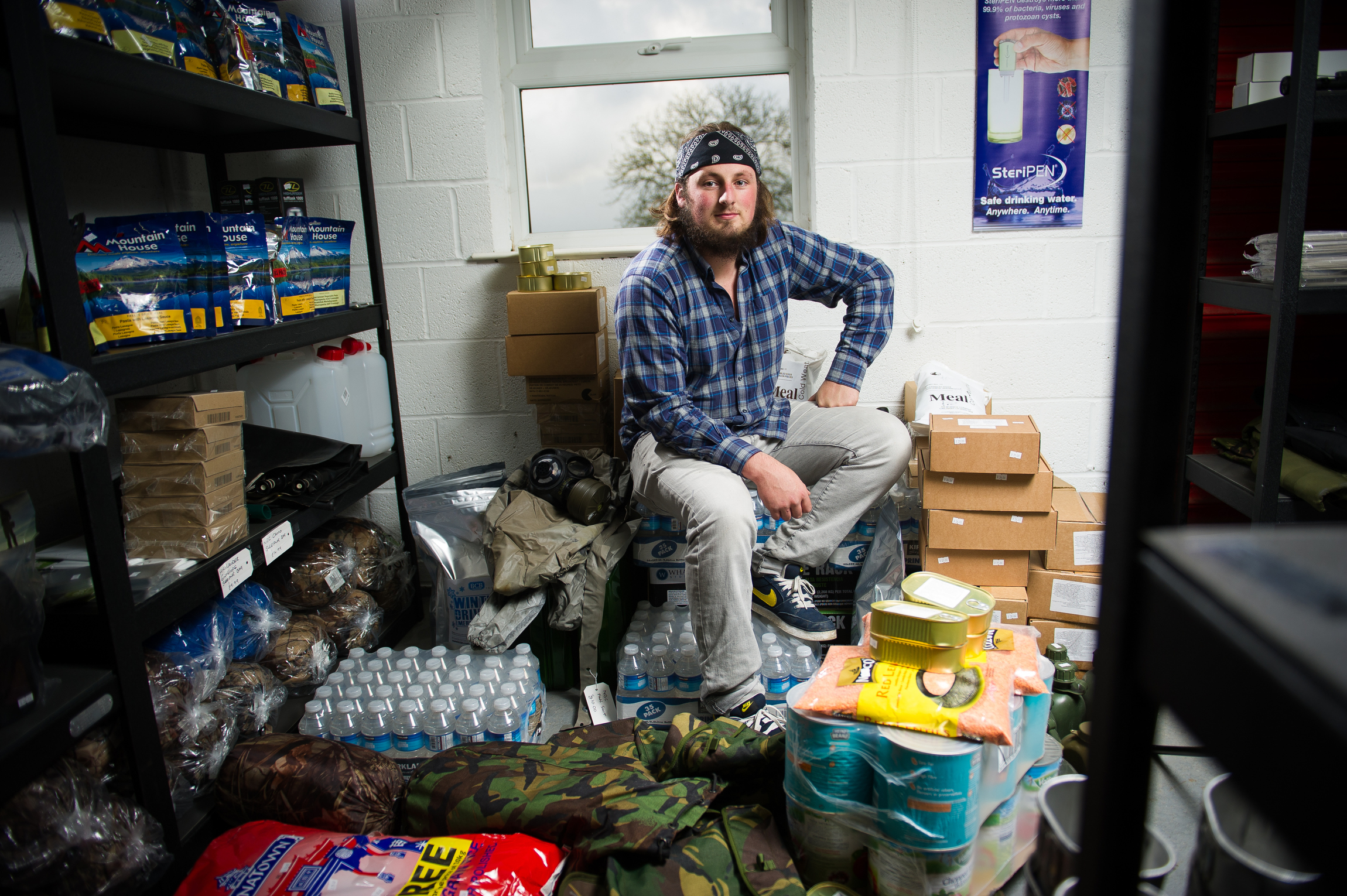 Many followers of collapsology are keen to stress it isn’t just another Facebook conspiracy video, nor is it the prediction of the sudden and apocalyptic end of the world.

It’s about uniting to act upon scientists’ warnings on the effects of climate change, as well as archaeologists’ study of how whole empires can fail.

Loïc Steffan, a French economist and author of Don’t Be Scared of Collapse, says Covid-19 “was a stress-test that has allowed us to see what works and what doesn’t”.

The collapsologist wants to save society. The survivalist is an individualist

The self-declared optimist, who is a prominent figure in the French movement, adds: “The collapsologist wants to save society. The survivalist is an individualist.”

For others, it’s a commitment to sustainability, while helping others to do the same.

‘I had a collapse of faith’

The movement, which sprung from Jared Diamond’s 2005 book Collapse: How Societies Choose to Fail or Succeed, struck a chord with many, including Essex vets Matthew and Charis.

“I had read a few collapsology books, including Jared Diamond’s, and found that I myself had had a collapse in faith in the stories of our culture and societies,” reveals Matthew.

The scientists’ warnings are pretty stark, and often not stark enough.

“The scientists’ warnings are pretty stark, and often not stark enough.

“I just started to think: ‘You know, I’d be more comfortable with a little patch of land where I could learn to provide our needs for ourselves rather than relying on mortgages from banks and food from supermarkets,’ so that’s what we did.” 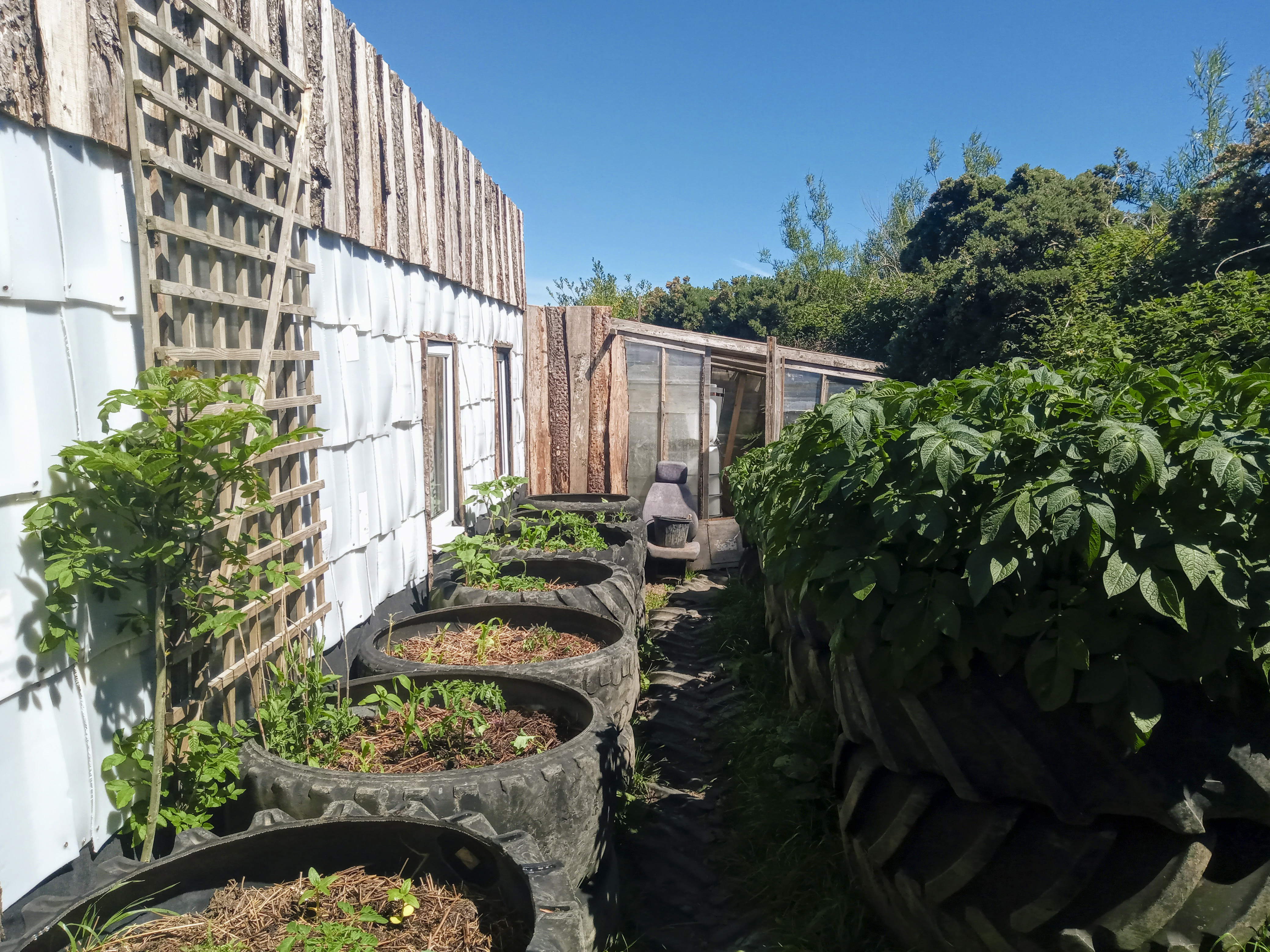 The couple grow vegetables in beds made from old tyres 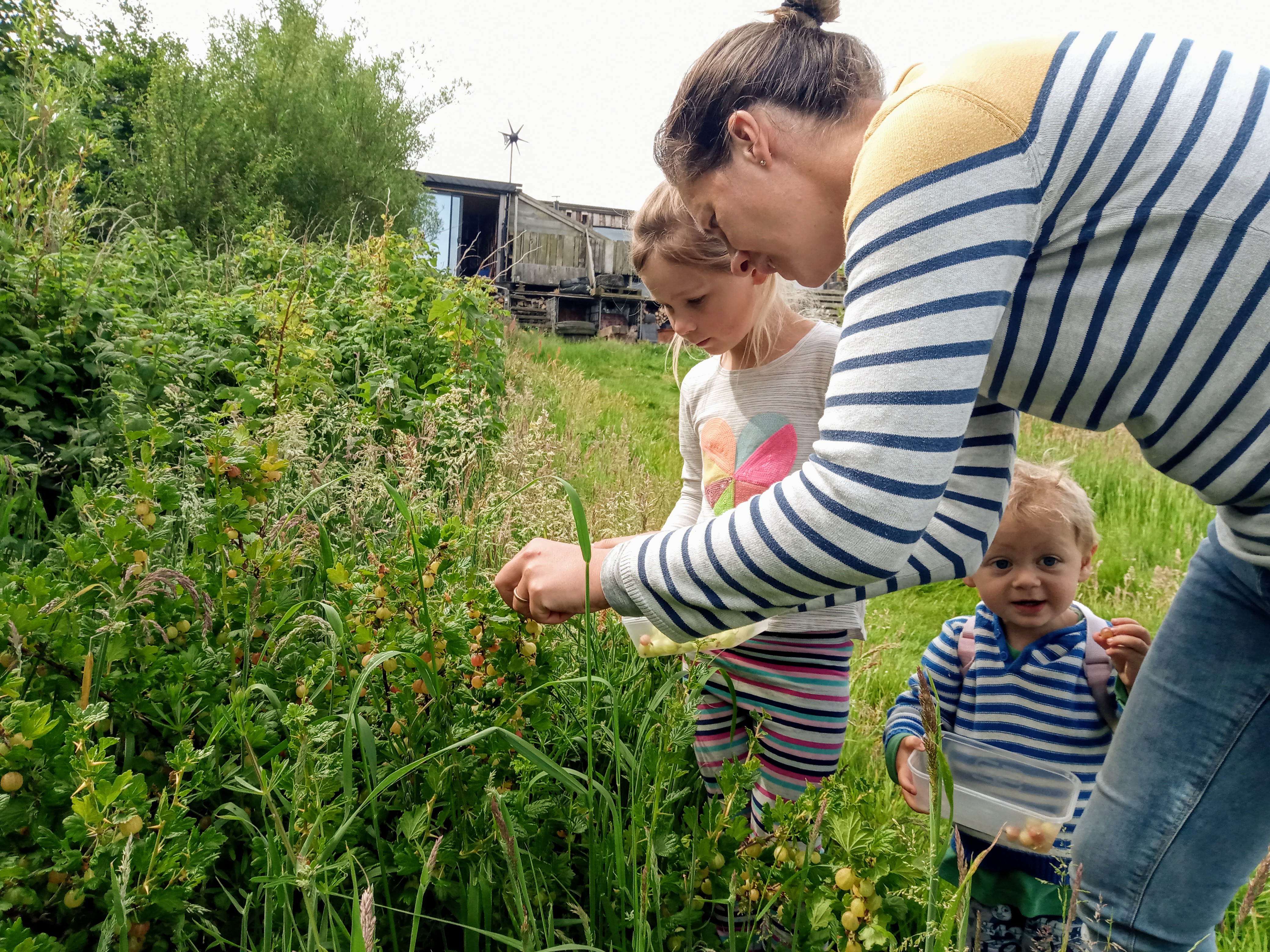 Charis picks berries with Elsa and Billy on Beeview Farm

Matthew and Charis, 35, bought three acres of land in Pembrokeshire for £35,000 and spent a further £25,000 on building a house, chicken coops, greenhouses, a horse poo-powered gas cooker and even a hot tub.

They are entirely self-sufficient, installing solar panels, growing their own fruit and veg, building beehives, rearing up to 140 chickens and converting lorries and flatbed hay trailers into zero-carbon living quarters.

“We haven’t gone full hippy though,” Matthew says. “We still have Netflix and Disney+. We aren’t cut off from life entirely – but we are entirely dependent on ourselves now.” 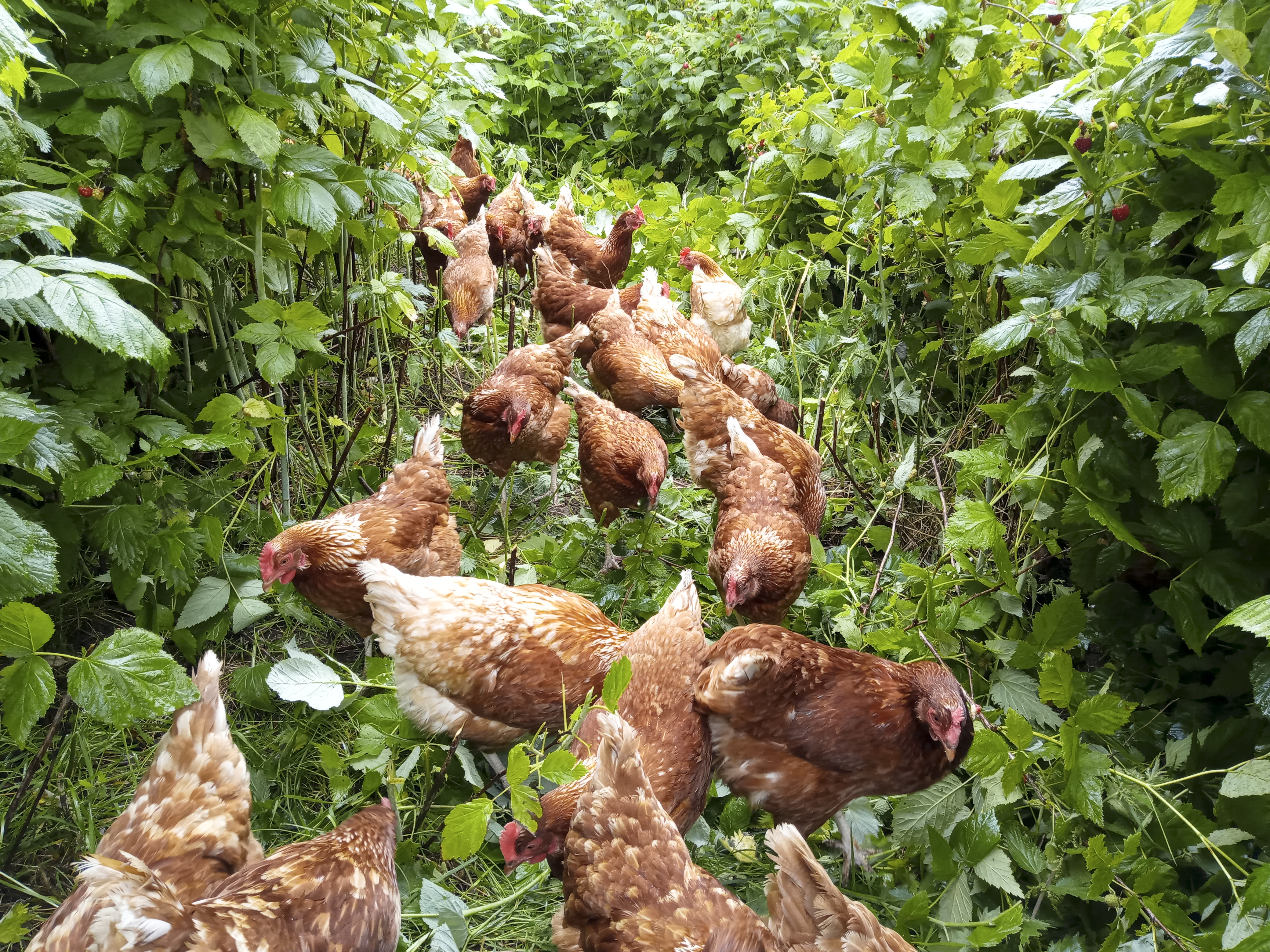 The family rear 140 chickens for eggs

Since buying the land in 2011 and making the full-time move a year later, Matthew and Charis have had daughter Elsa and son Billy.

As their lives on Beeview Farm have grown, so has the buzz about it from others.

After years of mistakes and learning on the job, Matthew and Charis are now running farm tours and even classes so others can follow.

“We’ve only been running the tours and courses for about a year and the interest has been growing,” Matthew adds.

“People are desperate to come but we’ve had to postpone visits because of the virus.

“There are people who want to do it and our message is: ‘Go. Just do it, do it.’

“If you trust what the scientists are saying in any way then you don’t have time to waste waiting for it to be proved.” 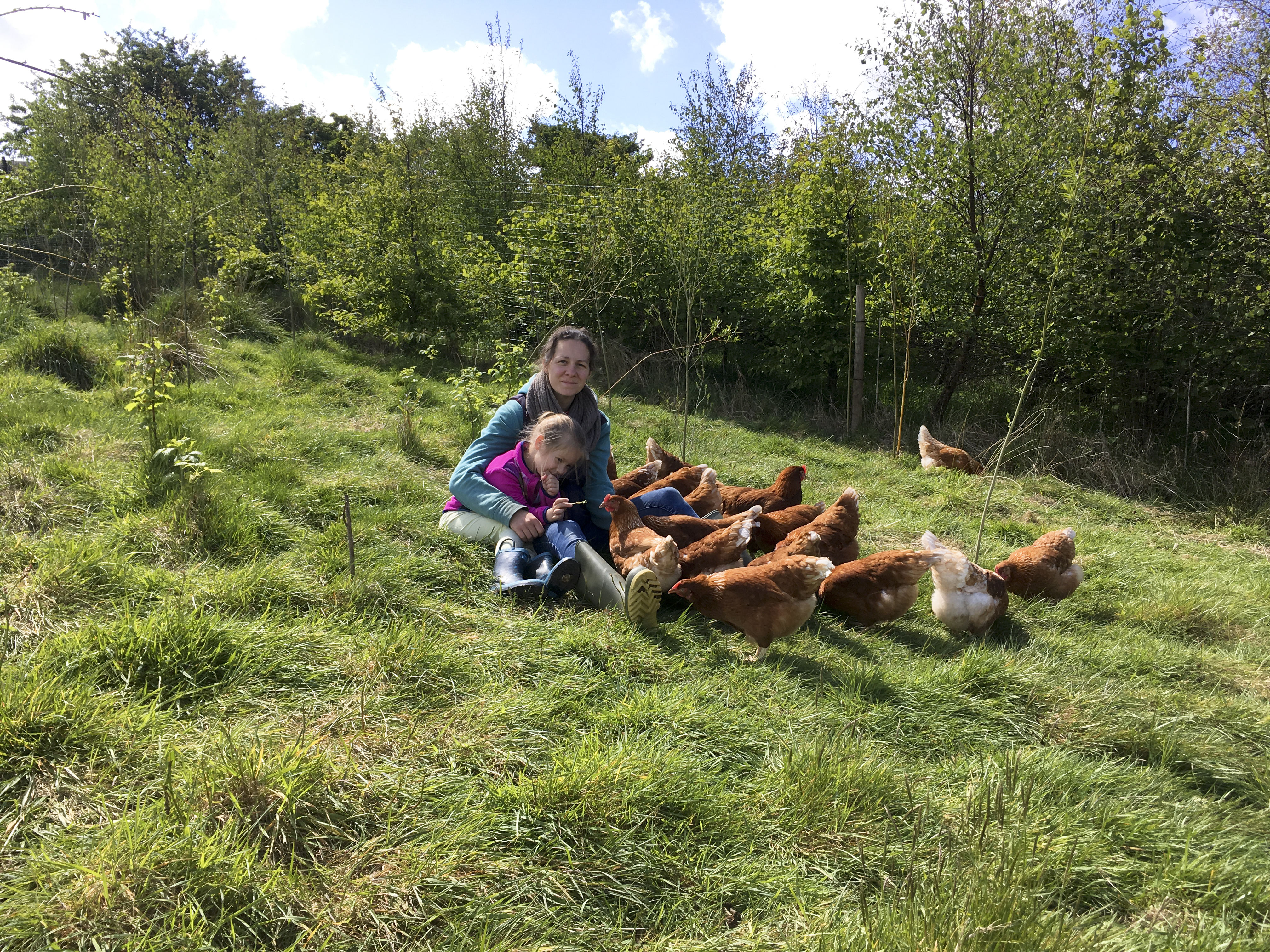 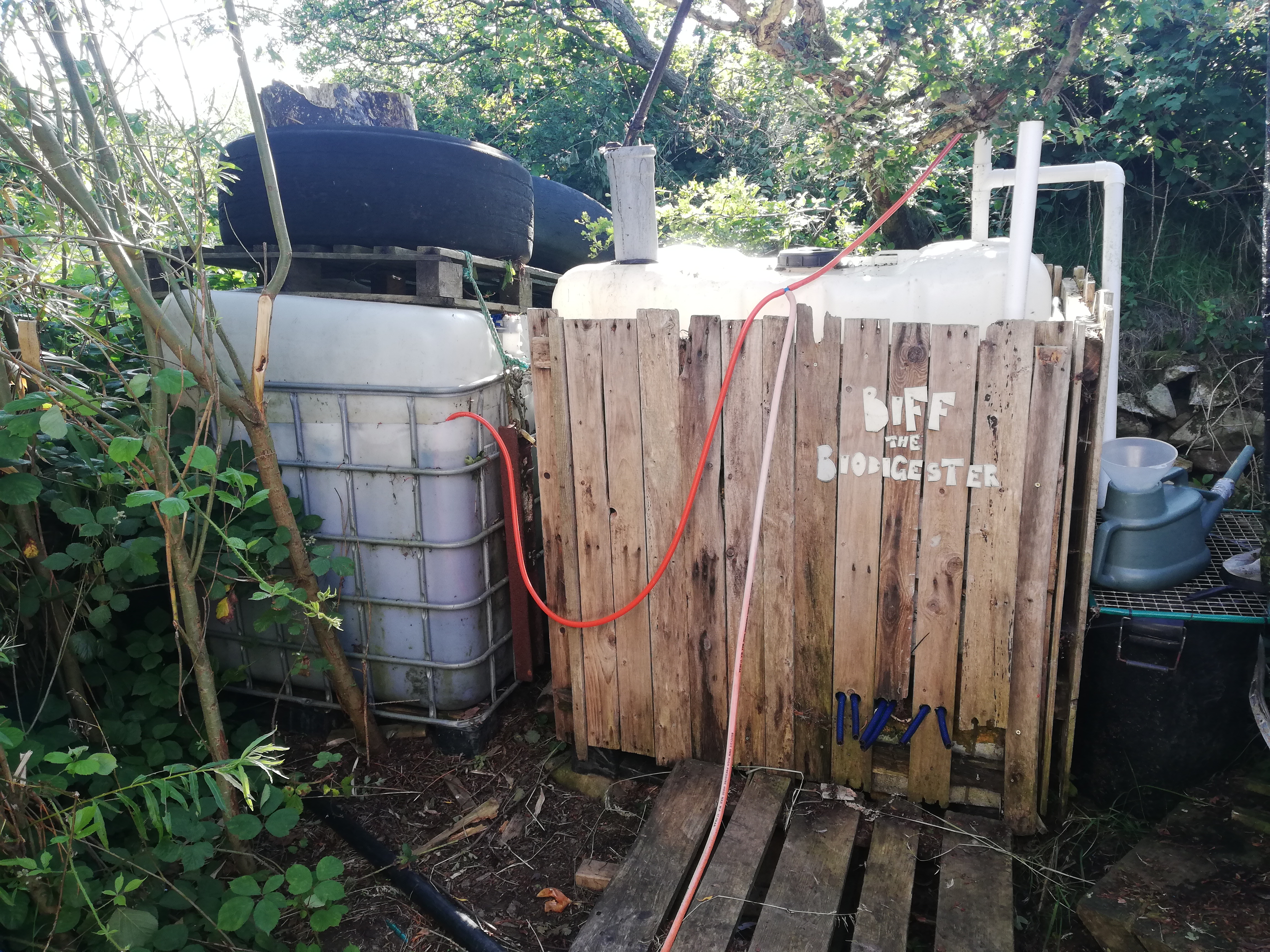 Is it the beginning of the end? It all depends on who you ask.

In France, Yves Cochet, a former environment minister for the government, predicted the start of the end by 2030 as a result of a petrol crisis or environmental change.

However, after coronavirus, he now says: “It’s happening even faster than we thought.”

I tend to think that humanity will stagger on until it absolutely can’t.

In the UK, one of the country’s few academic “collapsologists” Dr Guy Middleton remains wary of making total apocalyptic predictions.

The Newcastle University lecturer, whose published books include Understanding Collapse: Ancient History and Modern Myths, says: “Putting it in terms of Extinction Rebellion or Greta Thunberg, the idea that action is necessary now, is really important – but without the survivalist mentality.

“Our society now sits on a scale that is absolutely unprecedented including the rate of extinction of marine and land species, pollution of oceans, plastic pollution and so on. 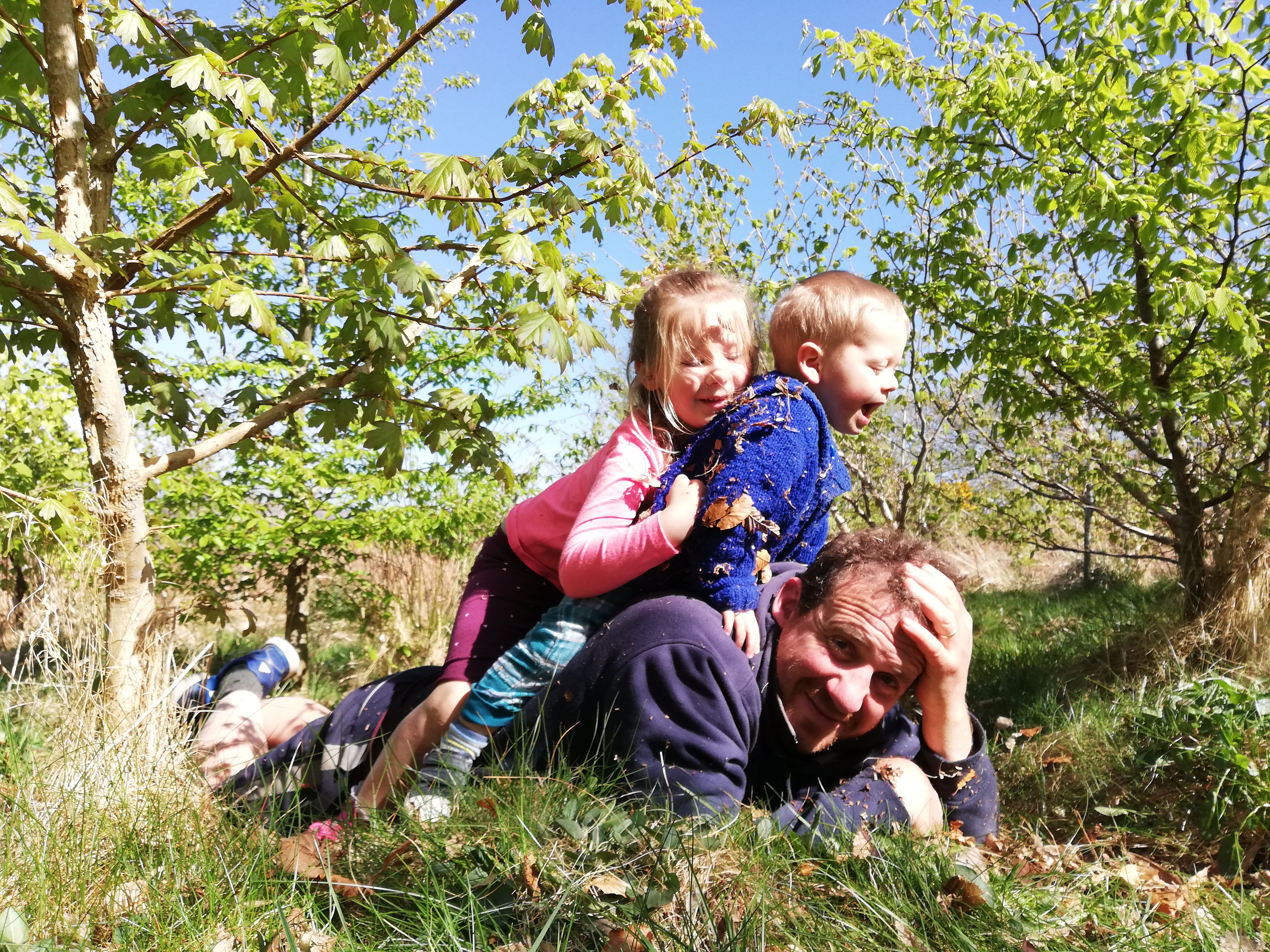 Matthew plays with the kids in the coppice, where the family source their firewood 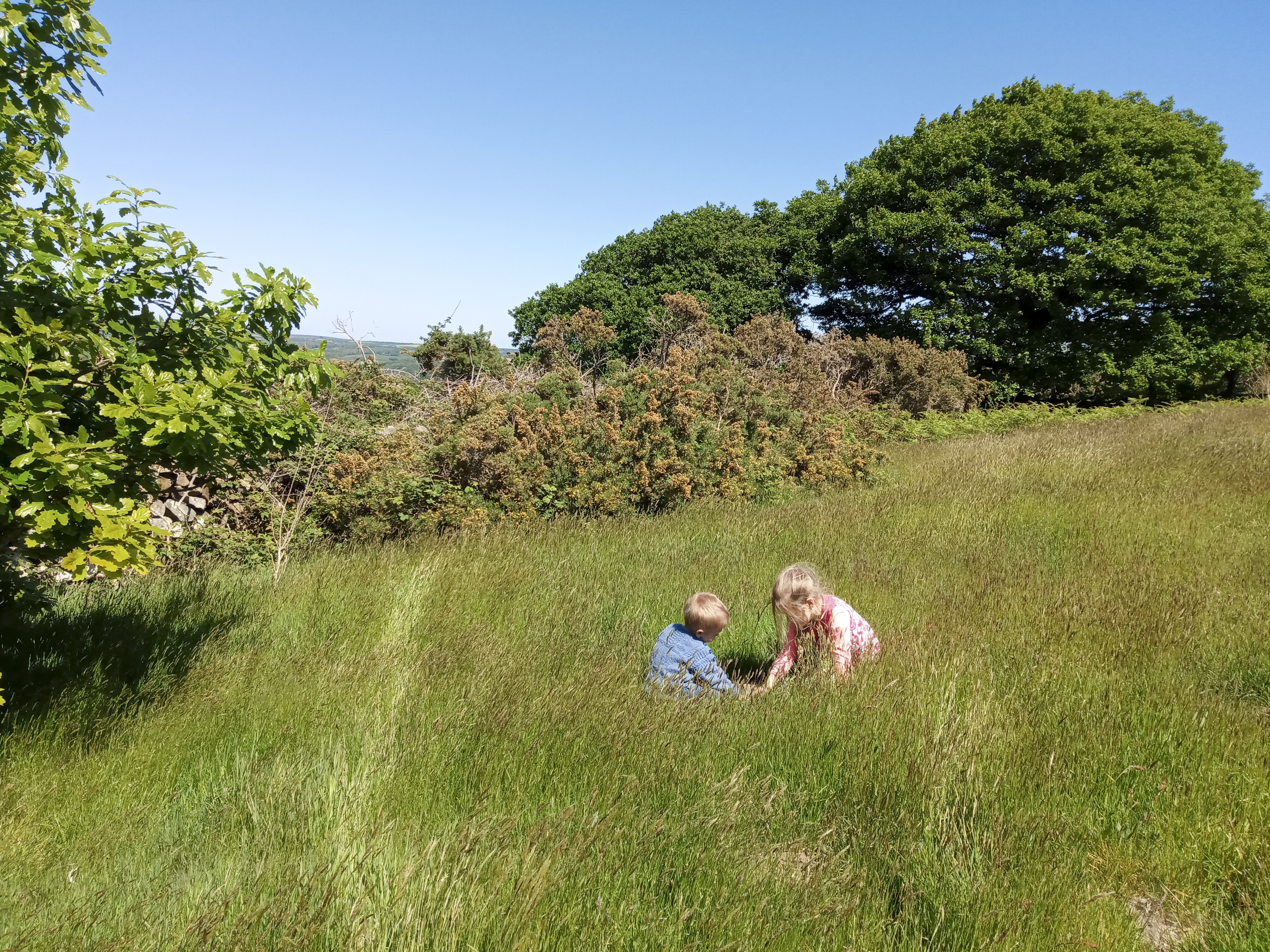 “But I tend to think that humanity will stagger on until it absolutely can’t. It might lose a lot of people but it’s probably not going to be in the next 50 years.

“We are a resilient and adaptable species.”

It’s not all doom and gloom

Words like “scary”, “collapse” and “catastrophe” are often used when describing the reasons people decide to quit “normal life”.

However, Matthew insists the two biggest factors others should follow suit are entirely positive.

He says: “One, it is terrific fun. And two, it just makes complete financial sense.

“The difficulty of doing it sometimes stems from the ‘prepper movement’, I would never describe us as preppers. But it is often seen as revolving around conspiracy theories.

“We’re going with the scientists – it’s a good idea to prep, but we’re not prepping for the Millennium Bug or anything like that.

We don’t owe anybody any money and we don’t have any bills – why aren’t more people doing this?

“We don’t owe anybody any money and we don’t have any bills – why aren’t more people doing this?”

Lincoln, who has run the UK’s biggest prepper shop, for almost seven years, believes people are keen to strike a balance between convenience and independence. 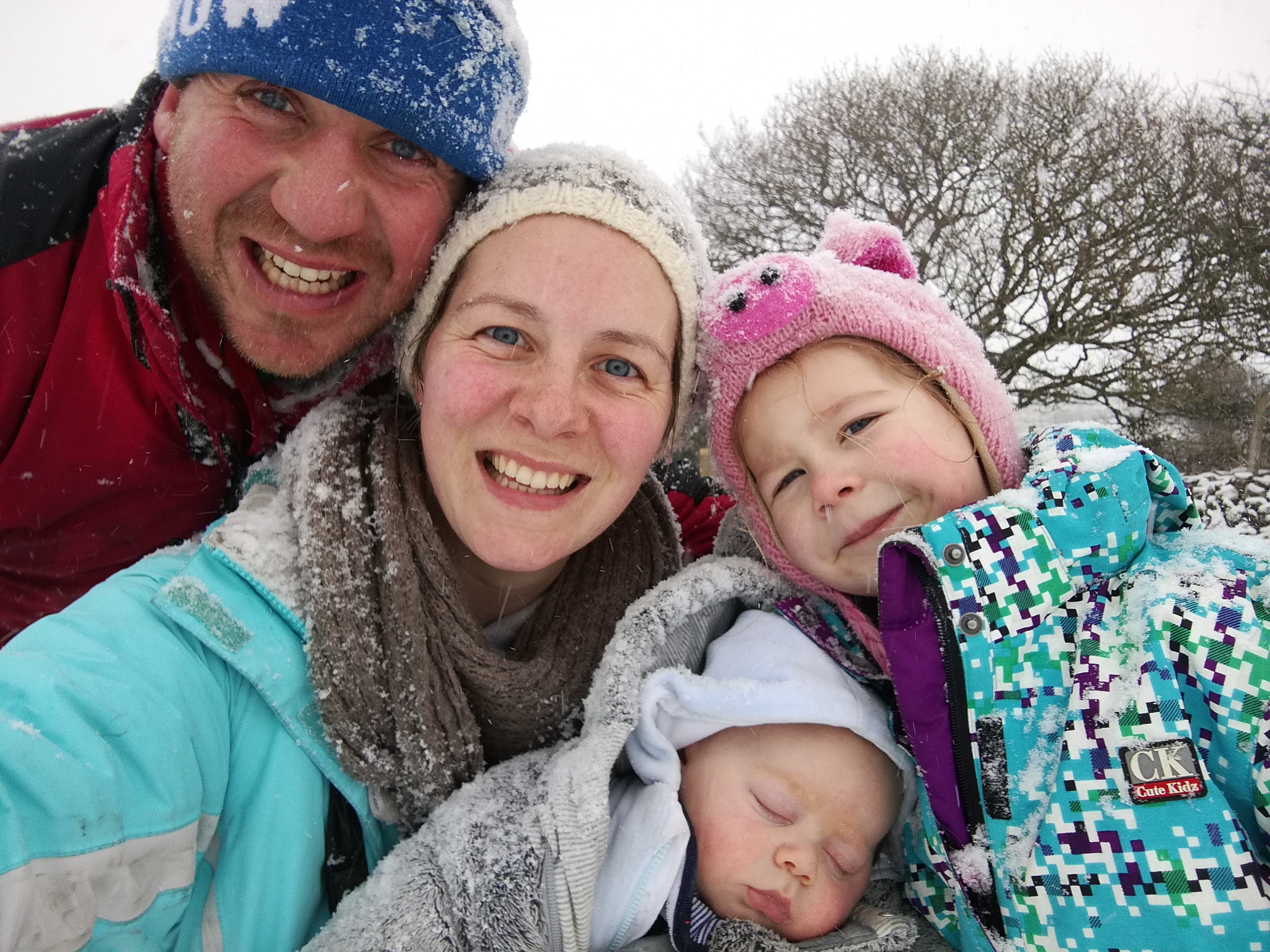 The Watkinsons built their farm less than £100,000 and say the fun it brings is the biggest positive of their lifestyle

He adds: “I’m not sure whether people are necessarily moving off grid due to it but there’s definitely a huge resurgence in people going back to the old ways of doing it themselves, like making their own bread or learning actual skills rather than relying on products from a shop.

“There’s a lot of going back to basics and learning to do it from scratch.

“People are thinking how they can filter water rather than buy water or provide their homes with energy if there was no electricity, changing their houses to be a bit more off-grid without living in the wild.

“It’s worth being ready. There seems to be a big mindset change over the last couple of years and coronavirus is going to be a real catalyst to make people really think: ‘We’ve got to do something, we’ve got to get something ready’.” 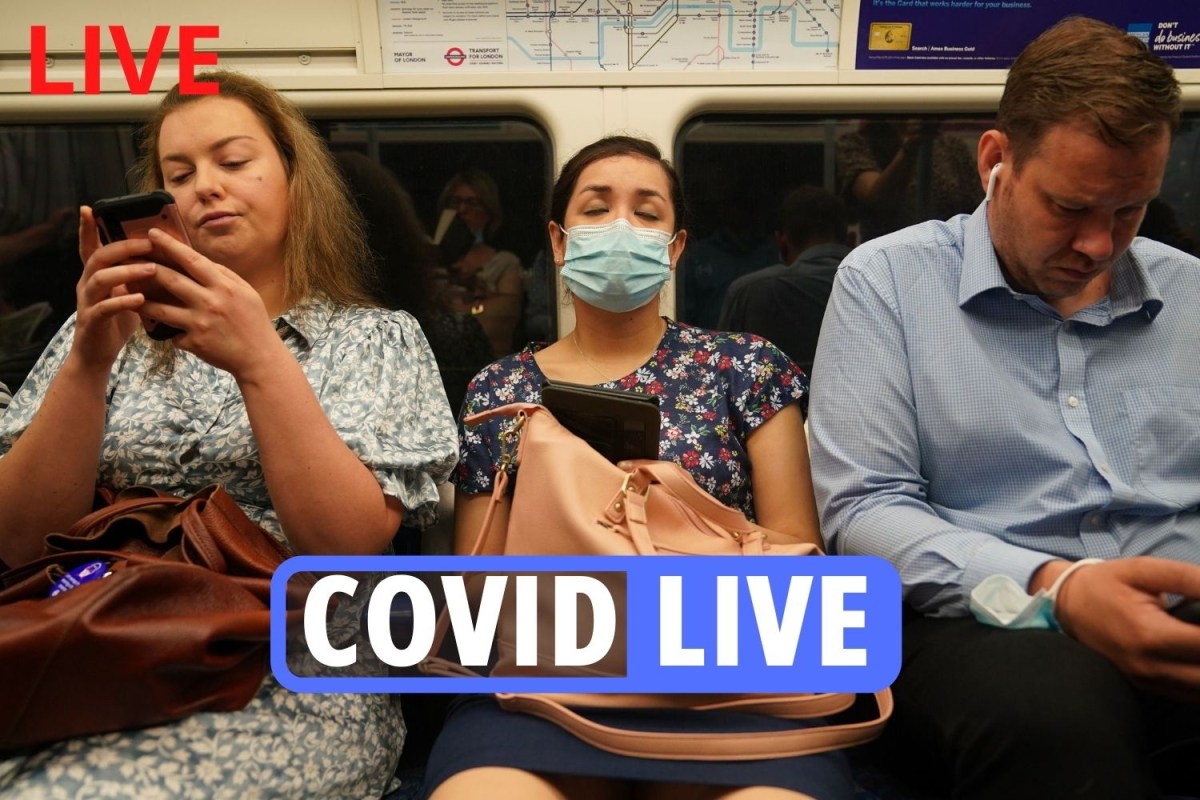