Two happy endings! Clare Crawley and Dale Moss, who got engaged during the first half of The Bachelorette season 16, celebrated Tayshia Adams and Zac Clark’s love story after the highly anticipated finale aired on Tuesday, December 22.

“It’s official! Zac and Tayshia, congratulations. I couldn’t be more happy for you,” the former football player, 32, said on his Instagram Stories. “Wishing you nothing but happiness … and nothing but the best.”

Dale told fans that watching Tayshia, 30, and Zac’s journey unfold was “pretty special” since he bonded with the addiction specialist, 36, when they arrived at La Quinta Resort & Club in Palm Springs, California, in July to begin filming the season. 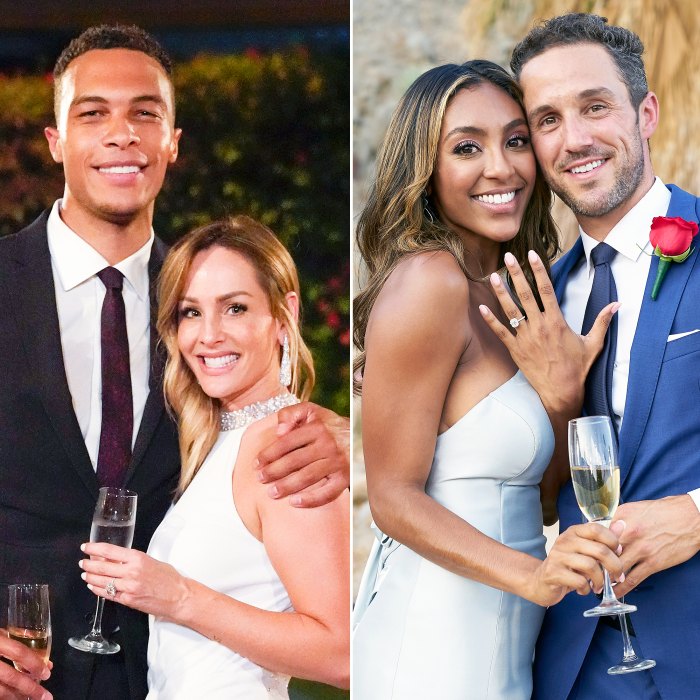 “I was someone who was in the limo with Zac on night one,” he said. “So Zac, I’m so happy for you. To see how things have ended and just the growth over the season is pretty amazing.”

While Clare, 39, has yet to publicly react to Tuesday’s finale, her fiancé told his Instagram followers that she “feels the exact same way.” The hairstylist did, however, share her excitement before the episode.

“I know that [Tayshia] has put her heart and soul into this, and she had such, such an amazing group of guys this entire time,” she said on her Instagram Stories earlier in the day. “Whoever she ends up with, whatever the ending is, I really do hope that she finds happiness because everybody is so deserving of it. And I really do hope she finds her person and she has the beginning of an amazing love story.”

The latest installment of the ABC reality dating series began with Clare as the lead. After the Sacramento, California, native found love with Dale within the first two weeks of production, Us Weekly broke the news in August that the network called in Tayshia to take over and complete the season.

Tuesday’s finale saw the former phlebotomist send home Ivan Hall after Ben Smith, who had previously been eliminated, made a surprise return to the resort. Zac and Ben, 30, subsequently met Tayshia’s parents before she accepted a proposal from the Haddonfield, New Jersey, native.

Tayshia was previously married to Josh Bourelle from 2016 to 2017, while Zac was married to Jennifer Stanley-George from 2009 to 2012.

Still going strong! Khloé Kardashian is setting the record straight on the status of Kylie Jenner’s relationship with Travis Scott...

Kate Middleton puts ‘duty before herself’ & priorities the Queen over her own family at Christmas, expert claims

Inside Paris Fury’s lavish 32nd birthday celebrations with plush meal out, flowers and a towering cake

Raquel and James Will Explain Split