Let’s do the damn thing … again? Becca Kufrin admitted she still has the engagement ring Garrett Yrigoyen gave her on the season 14 finale of The Bachelorette, but she’s not sure if she would be willing to accept another diamond on the ABC series.

“I’m never going to wear [the ring] again,” the 30-year-old former publicist told Kaitlyn Bristowe on the season 11 Bachelorette’s “Off the Vine” podcast. “I don’t want to reuse the diamonds for anything, like, for myself. I don’t want that juju.”

Kufrin confirmed in September that she and Yrigoyen, 31, ended their engagement. News of their split came just over the two-year mark of their engagement, which means the couple got to keep the Neil Lane sparkler — worth a reported $100,000 — even if they split. While Yrigoyen has already moved on with Alex Farrar, Kufrin isn’t quite ready to get back out there. 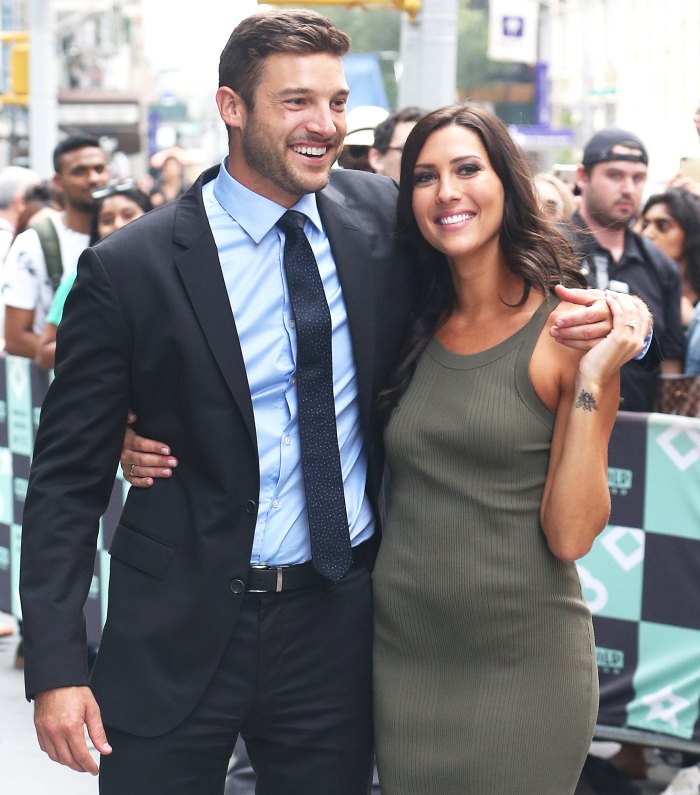 “I didn’t want to put a Band-Aid on a bullet hole and be like, ‘It’s OK. I’m just going to find the next person to keep me occupied,’” Kufrin told Bristowe about dating again. “I was, like, not into talking to guys for a while, you know? And, like, of course, people slide into your DMs. Now, I’m a little bit more open because I think I’m, like, a little bit more ready. But I still have a lot of work to do. And so, it’s fun to have that … but I want to give myself at least until the new year, like a couple more months, to figure out where I’m at.”

In the past, Brad Womack is the only franchise lead who has taken on the role more than once. Bristowe, meanwhile, suggested Kufrin could be the first Bachelorette to return to the show.

“Oh God! I don’t know. Lately, people have been asking I think just because I’m single. I never want to say no and I’d never want to say never,” Kufrin said about being the Bachelorette again. “But also, like, I am 30. I feel like a grandma. I love to sleep. I love my bed. I love snuggling with [my dog] Minno. As you know, when you film an entire season, like, there’s no sleep for two-plus months, and I do not know if I could do it again.”

Bachelor Nation was introduced to Kufrin on Arie Luyendyk Jr.’s season 22 of The Bachelor. The former race car driver, 39, infamously dumped the Minnesota native after proposing to her in order to reunite with runner-up Lauren Burnham, during the 2018 finale. Luyendyk Jr. and Burnham, who wed in 2019, went on to welcome daughter Alessi, 18 months.

“Also, like, doing the show again, I mean, let’s be honest: I was engaged two times already. Like, I don’t want to keep racking up the rings,” Kufrin added. “Like, as much as I love Neil Lane, I don’t want to have a ring graveyard.”

During her chat with Bristowe, Kufrin also addressed rumors that she reunited with her runner-up, Blake Horstmann.

“We’re friends. He actually did make a couple of appearances on the [Bachelor Live] tour, like back in … February and March. So, we have stayed on great terms,” she explained. “Like, he is somebody that I consider a great friend. … I think the show bonds you in such a weird way that we were able to kind of — I don’t want to put words in his mouth — but we were able to get through the really hard breakup part to be like, ‘You know, we both have our separate experiences from the show.’ But I have such a soft spot in my heart for Blake.”