In love! Bella Hadid gushed over her sister Gigi Hadid’s daughter, Khai, one year after becoming an aunt.

“I start to sleep over because I want to be with the baby,” the 25-year-old model told E! News’ Zanna Roberts Rassi during a Daily Pop interview published on Wednesday, October 27. “And I want to wake up early and be there.”

The Washington D.C. native revealed that Khai, who 26-year-old Gigi shares with boyfriend Zayn Malik, has become the center of her entire family’s universe since her September 2020 arrival.

“I never knew that I could have this much joy in my life. She’s the biggest gift,” Bella said. “Our family has changed in the best way for the better.” 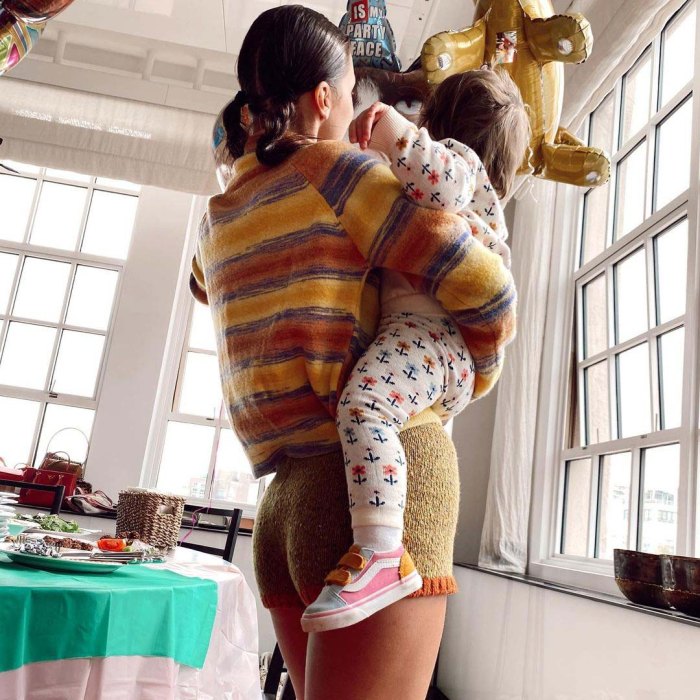 The Michael Kors’ James Bond-inspired MMK x 007 collection model joked, “Are there full-time aunties out there?”

Earlier this month, Gigi paid tribute to her younger sister in honor of her birthday and pointed out how important Bella is to Khai.

“She’s my baby sister but also a firecracker of a spiritual bodyguard and a forever protector as an auntie,” the California native wrote via Instagram in October, alongside a photo of Bella and Khai together. “I have so much pride watching you take ownership of your growth and fulfillment, and I know everything that you have created for yourself will bring you the year of joy and light you deserve !!!!!! Can’t wait. I love you more every sun-lap.”

Bella, for her part, praised her big sister for being such a great mother while celebrating Khai’s first birthday party in early October.

“Watching my sister be the greatest mother to the most magical child is the biggest joy in my life,” she captioned a series of photos from the bash, which included balloons, bubbles and a play area for the baby.

A few weeks prior, Bella shared a few personal memories from Khai’s first year in a sweet tribute for her birthday.

“Happy Birthday to the greatest gift our family has ever been blessed with … I didn’t know my heart could grow this big!!!!” the CHROMEHEARTS+BELLA designer wrote via Instagram in September. “You make me smile when I’m sad and make me cry of happiness just because ur alive. I can’t wait to watch you grow into the most perfect specimen of all.”

The proud aunt also gave Gigi and Malik, 28, a shout-out for blessing her with her “forever best friend.”

Us Weekly confirmed in April 2020 that Gigi was expecting her first child with the former One Direction singer. Five months later, the couple welcomed their baby girl, which Malik announced via Instagram.

“Our baby girl is here, healthy and beautiful. To try put into words how I am feeling right now would be an impossible task,” the “Pillowtalk” singer tweeted at the time. “The love I feel for this tiny human is beyond my understanding. Grateful to know her, proud to call her mine and thankful for the life we will have together.”

The twosome, who dated on and off for five years before reconnecting in January 2020, have since kept their daughter’s life as private as possible. They have yet to post a photo of Khai’s face but have shared moments of her first year with their fans.

The new parents are “happy with the way things are for now” and “aren’t in any rush” to get married, a source exclusively told Us in April, adding that they “feel so blessed” to have their daughter in their lives.