The Ohio native (whose real name is Jonathan Kirk) made headlines earlier this week after he compared people living with HIV and AIDS to “junkies on the street” while performing on Sunday, July 25. Just days later, the “Rockstar” rapper, 29, alluded to his controversial statement in the music video for his song “Giving What It’s Supposed to Give.”

At one point in the video — which was released on Wednesday, July 28 — the father of two held up a sign that read “AIDS.” Later, a message reading “Don’t Fight Hate With Hate” showed up in rainbow lettering on the screen. “My apologies for being me the same way you want the freedom to be you,” the note continued.

One day prior, DaBaby shared a separate apology via Twitter.

“Anybody who done ever been effected [SIC] by AIDS/HIV y’all got the right to be upset, what I said was insensitive even though I have no intentions on offending anybody. So my apologies,” he wrote on Tuesday, July 27. “But the LGBT community… I ain’t trippin on y’all, do you. y’all business is y’all business.”

The Grammy nominee’s apologies were issued after he was called out for his comments by multiple fans and celebrities. Following his original statement on Sunday, DaBaby doubled down during an Instagram Live. 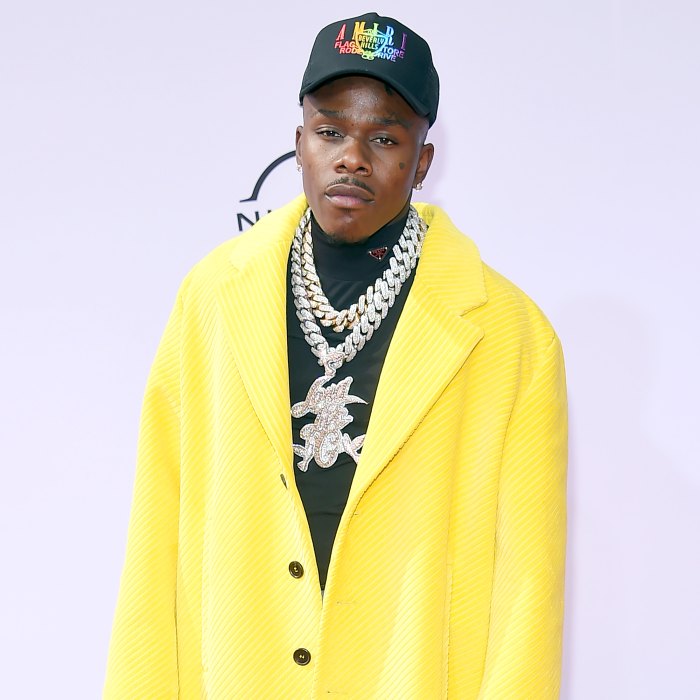 DaBaby at the BET Awards on June 27, 2021 in Los Angeles, California. AFF-USA/Shutterstock

Later, Dua Lipa, who worked with DaBaby on a remix for her song “Levitating,” issued a statement condemning her collaborator.

“I’m surprised and horrified at DaBaby’s comments,” she wrote via her Instagram Story on Tuesday. “I really don’t recognize this as the person I worked with. I know my fans know where my heart lies and that I stand 100% with the LGBTQ community. We need to come together to fight the stigma and ignorance around HIV/AIDS.”

Elton John also stood up for the LGBTQA+ community, noting that he was “shocked” by the “Ball If I Want To” artist’s words.

“Homophobic and HIV mistruths have no place in our society and industry and as musicians, we must spread compassion and love for the most marginalised people in our communities. A musician’s job is to bring people together,” the “Tiny Dancer” singer, 74, wrote as the conclusion to a series of tweets.