Sharing her thoughts. Dakota Johnson shared her thoughts on the #MeToo movement and the power of cancel culture after working with Johnny Depp, Shia LaBeouf and Armie Hammer, all of whom have faced allegations of harassment.

“I never experienced that firsthand from any of those people,” the Fifty Shades of Grey actor, 32, told The Hollywood Reporter on Tuesday, November 3. “I had an incredible time working with them; I feel sad for the loss of great artists. I feel sad for people needing help and perhaps not getting it in time. I feel sad for anyone who was harmed or hurt. It’s just really sad. I do believe that people can change. I want to believe in the power of a human being to change and evolve and get help and help other people. I think there’s definitely a major overcorrection happening. But I do believe that there’s a way for the pendulum to find the middle.”

She continued, “The way that studios have been run up until now, and still now, is behind. It is such an antiquated mindset of what movies should be made, who should be in them, how much people should get paid, what equality and diversity look like. Sometimes the old school needs to be moved out for the new school to come in.” 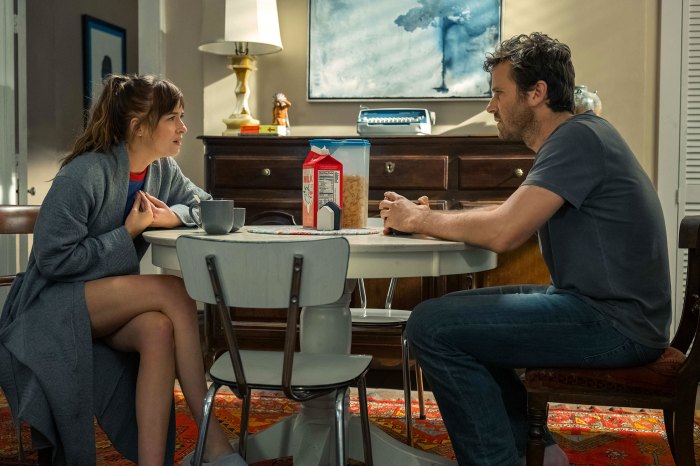 Dakota Johnson as Carrie and Armie Hammer as Will in ‘Wounds.’ Michele K Short/UA/Netflix/Kobal/Shutterstock

“Yeah, cancel culture is such a f–king downer,” the How to Be Single star said. “I hate that term.”

The Pirates of the Caribbean star, who went through a highly publicized legal battle with ex-wife Amber Heard after she accused him of abuse, recently slammed cancel culture.

“It can be seen as an event in history that lasted for however long it lasted, this cancel culture, this instant rush to judgment based on what essentially amounts to polluted air,” he said in September at the San Sebastian Film Festival. “It’s so far out of hand now that I can promise you that no one is safe. Not one of you. No one out that door. No one is safe. It takes one sentence and there’s no more ground, the carpet has been pulled. It’s not just me that this has happened to, it’s happened to a lot of people. This type of thing has happened to women, men. Sadly at a certain point, they begin to think that it’s normal. Or that it’s them. When it’s not.”

The SAG winner has vehemently denied Heard’s allegations and sued her for defamation. They are scheduled to go to trial in January 2022.

Hammer, for his part, was accused by multiple women of sexual abuse and rape earlier this year. He has denied all claims against him and checked into treatment for drug, alcohol and sex issues in June.

LaBeouf, meanwhile, was accused of sexual battery, assault and emotional distress in a December 2020 lawsuit filed by ex-girlfriend FKA Twigs. In a statement at the time, the Disney Channel alum said that “many of these allegations are not true,” but noted that he accepted “accountability” for his actions and entered a 12-step program. He is also attending therapy.

New year, new woman! Raquel Leviss stood her ground after receiving backlash for having an “unengagement party” following her split...

John David Duggar Crashed His Plane With 2 Passengers on Board

Macaulay Culkin, Brenda Song Are Engaged After 4 Years of Dating