So in love! Dale Moss couldn’t keep his feelings to himself while celebrating his one-year anniversary with Clare Crawley.

The former football player, 32, paid tribute to the Bachelorette alum, 40, in an Instagram post on Wednesday, July 28. “It’s the moments that nobody sees that make life and our love so special,” he wrote alongside a photo of the couple sharing a sweet kiss. “The most beautiful thing is that those are the moments only we will carry forever.”

The pair met during season 16 of The Bachelorette, which aired in late 2020. Crawley famously left the show after filming for less than two weeks because she developed such a strong connection with Moss. After her departure, Tayshia Adams replaced her as the lead.

“When we first met I knew god’s hand was at work but I could have never imagined the journey he had in store for us,” the South Dakota native continued in his post. “Love you with all my heart @clarecrawley ❤️. Happy ONE YEAR Anniversary Love!”

The pair got engaged at the end of their time on The Bachelorette but split in January. “She really fell hard for Dale and saw a future with him,” an insider told Us Weekly at the time. “To have this all blow up in her face has been really difficult. The breakup was hard for the both of them at the end.”

One month later, however, they were spotted holding hands in New York City, and Us later confirmed that they were back together.

After their brief split, the twosome played coy about whether they were still engaged, but earlier this month, Us confirmed that they’re once again planning to walk down the aisle. 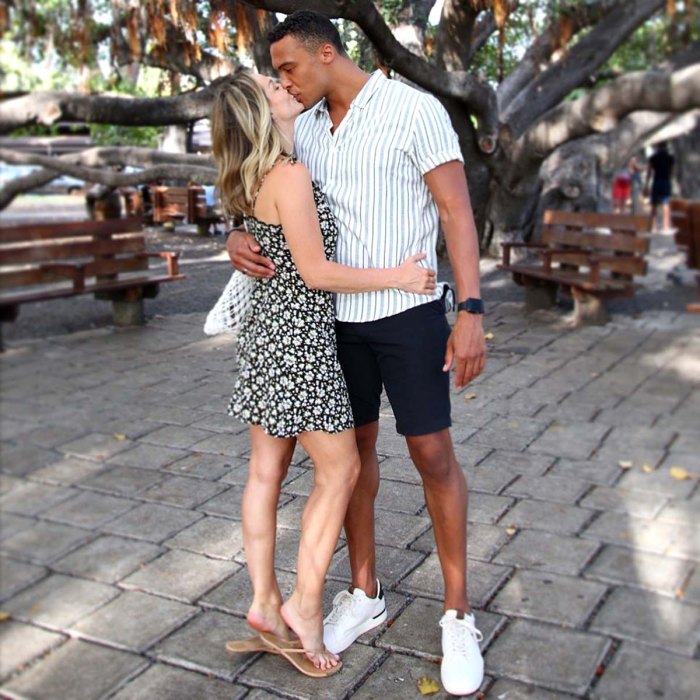 “They’re engaged but still are working on building a solid relationship,” an insider explained. “They’ve discussed future plans but aren’t necessarily wedding planning. They aren’t rushing to tie the knot.”

The source added that the couple still have things to work out as they look toward the future, but noted they’re in “a much better place” than they were several months ago.

“They’re still working on some issues they have to overcome but it’s not like they make it known,” the insider continued. “They’re more private when it comes to their issues. The good thing is that they’re happy together and enjoying this time as an engaged couple. They love each other very much and care for each other.”