Elizabeth Hurley Dishes on Her ‘Worst’ Day Filming ‘The Royals’

Getting down and dirty! Elizabeth Hurley opened up about her most uncomfortable filming experience, which included being covered in chocolate while telling Us about some of her sexiest social media photos.

During a game of Us Weekly’s “I Can Explain,” the British model, 55, revealed why she was not a fan of getting covered in brown goop while working on The Royals. 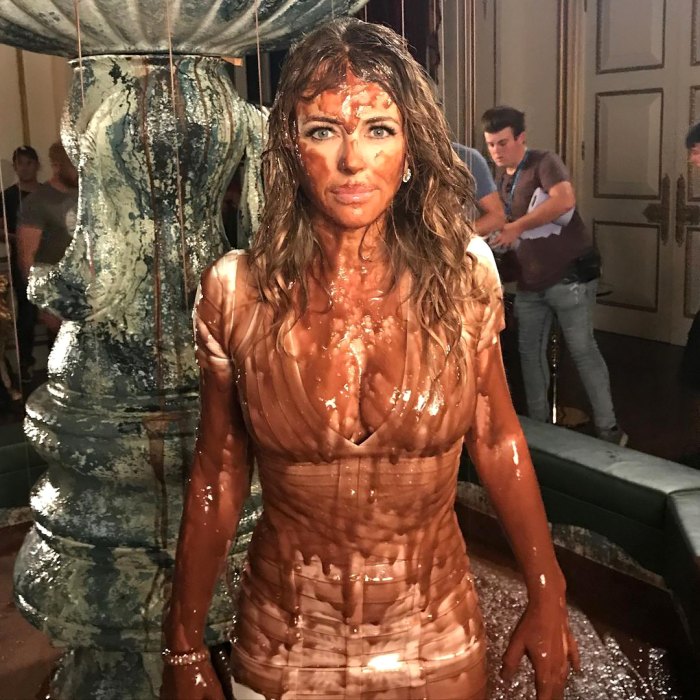 “Oh, yes. Well, I can explain that one,” she exclusively told Us, referencing a photo of herself drenched in “chocolate” sauce. “That was filming The Royals, which I shot for E! for four years [from 2015 to 2018]. I played the queen of England and one of my rivals had just pushed me into a chocolate fountain.”

The Austin Powers: International Man of Mystery actress noted that the sauce was not actually chocolate and it was not pleasant.

“It was some disgusting brown stuff the props guys mixed up. It was probably the worst day shooting I’ve ever had,” Hurley said. “I didn’t taste it, but I was soaked. I just had to keep doing it again and again — then they have to wash your hair and they have to dry your hair. It was a nightmare.”

The Runaways alum also shared the story behind one of her iconic throwback snaps with ex-boyfriend Hugh Grant.

“I think that was my 30th birthday with my ex Hugh,” she told Us. “And we were in the Monkey Bar in New York and I was blowing out my candles in a Dolce & Gabbana leopard skin shirt, which I still have, because I save all my clothes.”

The Bedazzled actress also dished about a few other memorable photos on her Instagram feed, including sexy photo of her in a bikini from her last vacation before the coronavirus pandemic and a sweet selfie with her son, Damian.

See what the model had to say about her saucy bathing suit shot and more in the exclusive Us Weekly video above.