Telling her side of the story. Emily Ratajkowski opened up about why she chose to write about her uncomfortable experience on the set of Robin Thicke‘s “Blurred Lines” music video eight years after working with the musician.

“I had a hard time writing that essay for a bunch of different reasons but ultimately I decided to include it in the book because my experience on the BL set and how I talked about it says so much about the evolution of my beliefs and politics,” Ratajkowski, 30, explained via her Instagram Stories on Thursday, October 21.

The model detailed the multitude of emotions that came with appearing in the 2013 video.

“Most of my jobs at that point kinda sucked — I was either shooting e-commerce for online stores where I felt like nothing more than a mannequin or I’d be in lingerie while some middle aged photographs told me to pout. BL was different,” she continued. “I was surrounded by women I liked and trusted. I had fun on set, being a sexy girl in a music video made me feel hot and cool and powerful. I told the world that the experience was empowering. In many ways it was. You’ll have to read the essay to fully understand the other sides to my experience.” 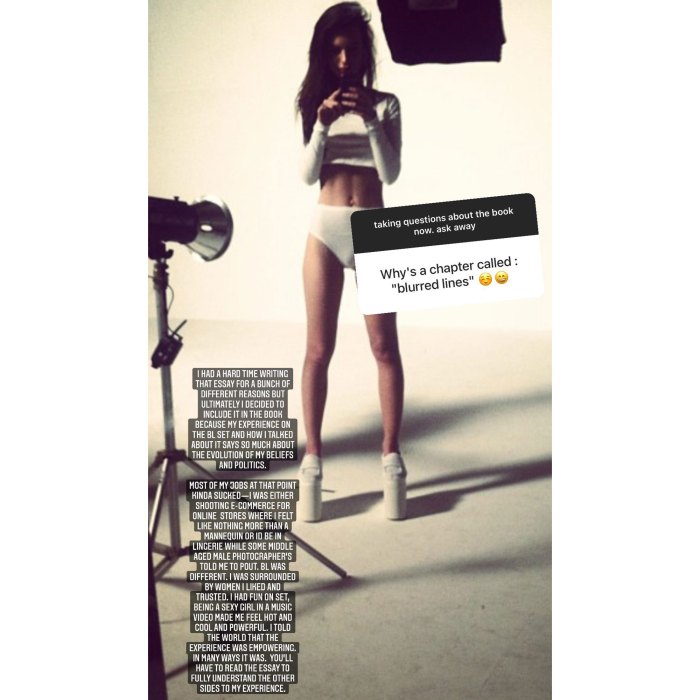 After the chapter about her time on set with Thicke, 44, went viral earlier this month, Ratajkowski revealed how disappointed she was that readers won’t get to experience her words the way she intended.

“What’s frustrating is I didn’t come out with it, it was leaked,” the Gone Girl star shared during an interview with Extra shortly after the excerpt was shared around in October. “It’s been hard for me. I really like to have control over my image and I wrote this book of essays to share the whole story and all sides of it, and I feel like it turns into a clickbait frenzy and all of a sudden words like ‘sexual assault’ and ‘allegations’ are getting thrown around rather than people reading the actual essay.”

The leaked section from Ratajkowski’s first book, My Body, which was posted by the Sunday Times of London, recalled an incident when the singer allegedly groped her.

“Suddenly, out of nowhere, I felt the coolness and foreignness of a stranger’s hands cupping my bare breasts from behind,” the actress reportedly recounted in the memoir, which was posted on October 4. “I instinctively moved away, looking back at Robin Thicke. … He smiled a goofy grin and stumbled backward, his eyes concealed behind his sunglasses. My head turned to the darkness beyond the set.”

At the time, Ratajkowski wasn’t looking to draw attention to what happened and instead found herself “desperate to minimize” the situation.

“I pushed my chin forward and shrugged, avoiding eye contact, feeling the heat of humiliation pump through my body. I didn’t react — not really, not like I should have,” she reportedly wrote.

The Masked Singer, for his part, has yet to publicly address the allegations. Following the song’s initial release, Thicke expressed regret in response to public backlash about the track’s NSFW lyrics.

“I’d lost the intention, you know what I mean? I needed to regain my perspective and my positive intention of what my music was for — and what my life was for,” the “Lost Without U” artist said during an interview with The New York Post in February. “Obviously, I was dealing with some bad habits. I was dealing with some personal issues on the inside that therapy and self-realization helped me get to and to get through.”

He continued: “It doesn’t matter what your intentions were when you wrote the song … [if] people were being negatively affected by it. And I think now, obviously, culture, society has moved into a completely different place.”

My Body is available on November 9.

If you or anyone you know has been sexually abused, call the National Sexual Assault Hotline at 1-800-656-HOPE (4673). A trained staff member will provide confidential, judgment-free support as well as local resources to assist in healing and recovering and more.