BEING married to royalty has its perks – and a jaw-dropping jewellery collection is certainly one of them if you are Meghan Markle.

The Duchess of Sussex, 41, has built up an impressive supply of diamond rings, necklaces and bracelets since tying the knot with Prince Harry three years ago.

Meghan Markle has a sparkling jewellery collection, including her jaw-dropping engagement ring

Mum-of-two, Meghan, who is now based in California with Harry and their two kids, Archie and Lilibet, has worn a staggering £14,715 worth of new jewellery this year, according to the Mail.

And this is in addition to her already whopping collection that she already had, which include her £271,000 engagement ring and heirlooms from Princess Diana.

Seen on Meghan: First revealed at their November 2017 engagement 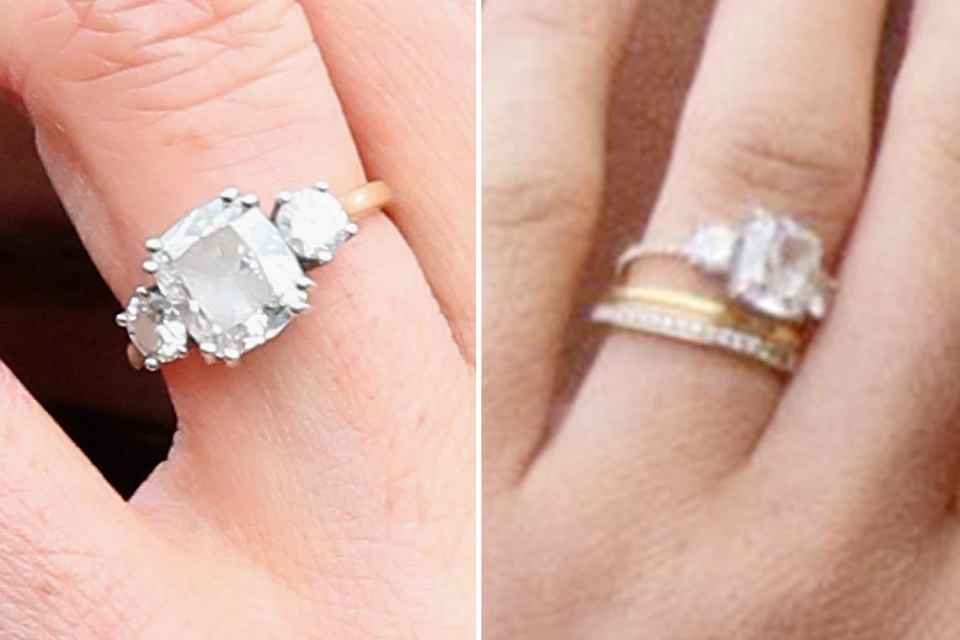 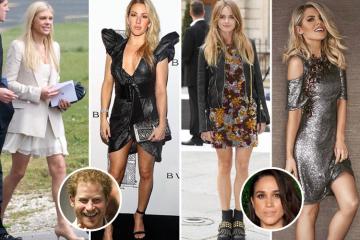 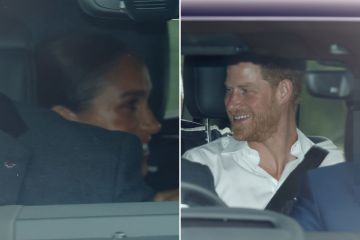 Designed by Prince Harry himself, the Duchess of Sussex’s stunning sparkler features two of the late Princess Diana‘s diamonds, with a main stone from Botswana.

Meghan later blinged it up to include a diamond-studded micro-pave gold band.

During the couple’s engagement interview in 2017, Prince Harry revealed he had specifically chosen a gold band for Meghan’s original ring based on her jewellery collection.

He said: “The ring is obviously yellow gold because that’s her favourite and the main stone itself I sourced from Botswana and the little diamonds either side are from my mother’s jewellery collection, to make sure she’s with us on this crazy journey together.”

Along with incorporating two of his late mother’s jewels into the intricate design, Botswana is an extremely special place for the royal couple as they jetted off to the country for a romantic African holiday on her 36th birthday ahead of their engagement. 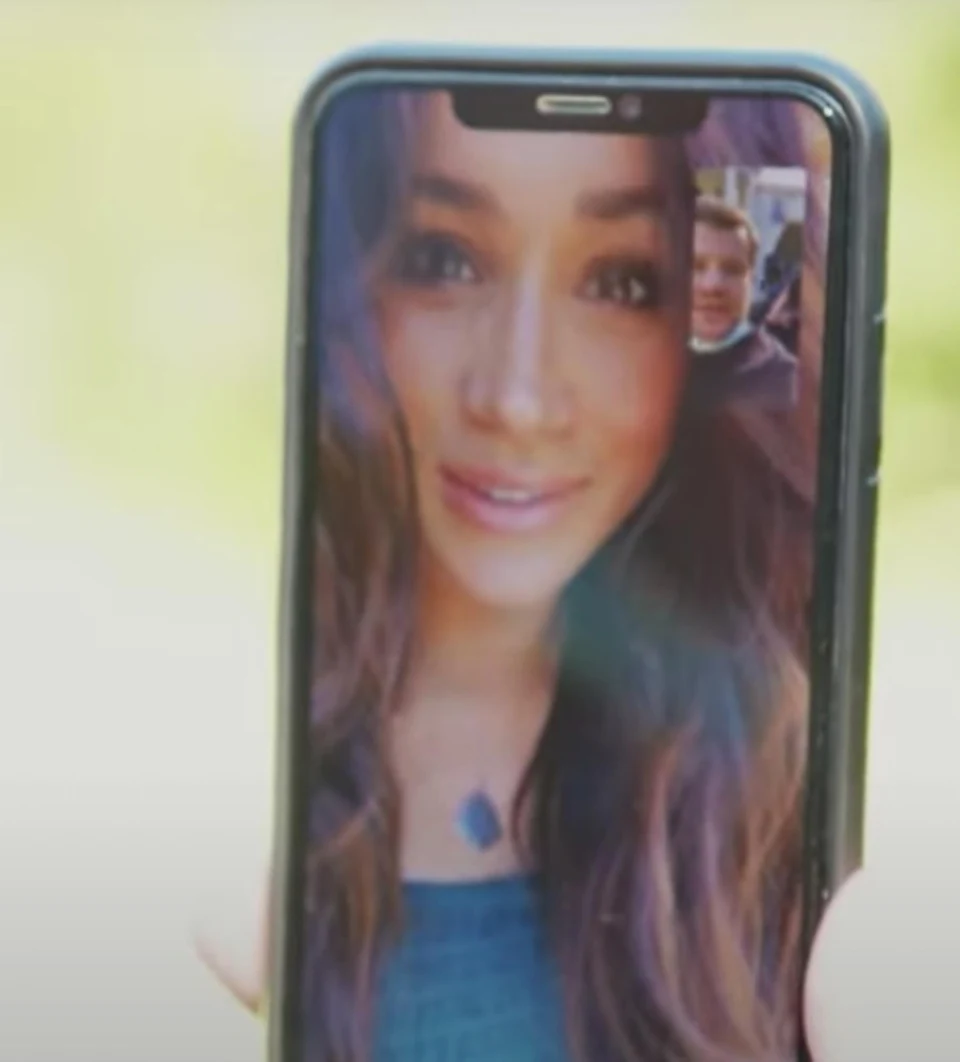 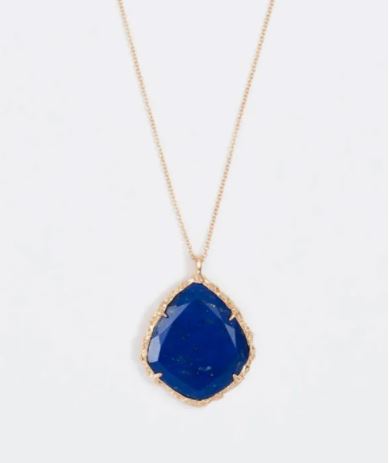 Meghan’s necklace is said to ‘aid in self-expression and revelation of one’s inner truth’Credit: The class

The duchess sent fashion fans into a frenzy when she appeared in a £22 blue dress on The Late Late Late Show with James Corden.

During his interview Prince Harry, the British talk show host gave the Duchess of Sussex a quick FaceTime call.

Along with her affordable frock – which sold out within hours – the former Suits actress wore a $1,296 [£940] crystal necklace from The Airelume, Page Six reports.

The collection of “wearable talismans” was designed by Taryn Toomey – who attended the Duchess’ luxury baby shower at The Mark hotel in New York in 2019.

According to the product description, Meghan’s lapis lazuli crystal “aids in self-expression and revelation of one’s inner truth.” 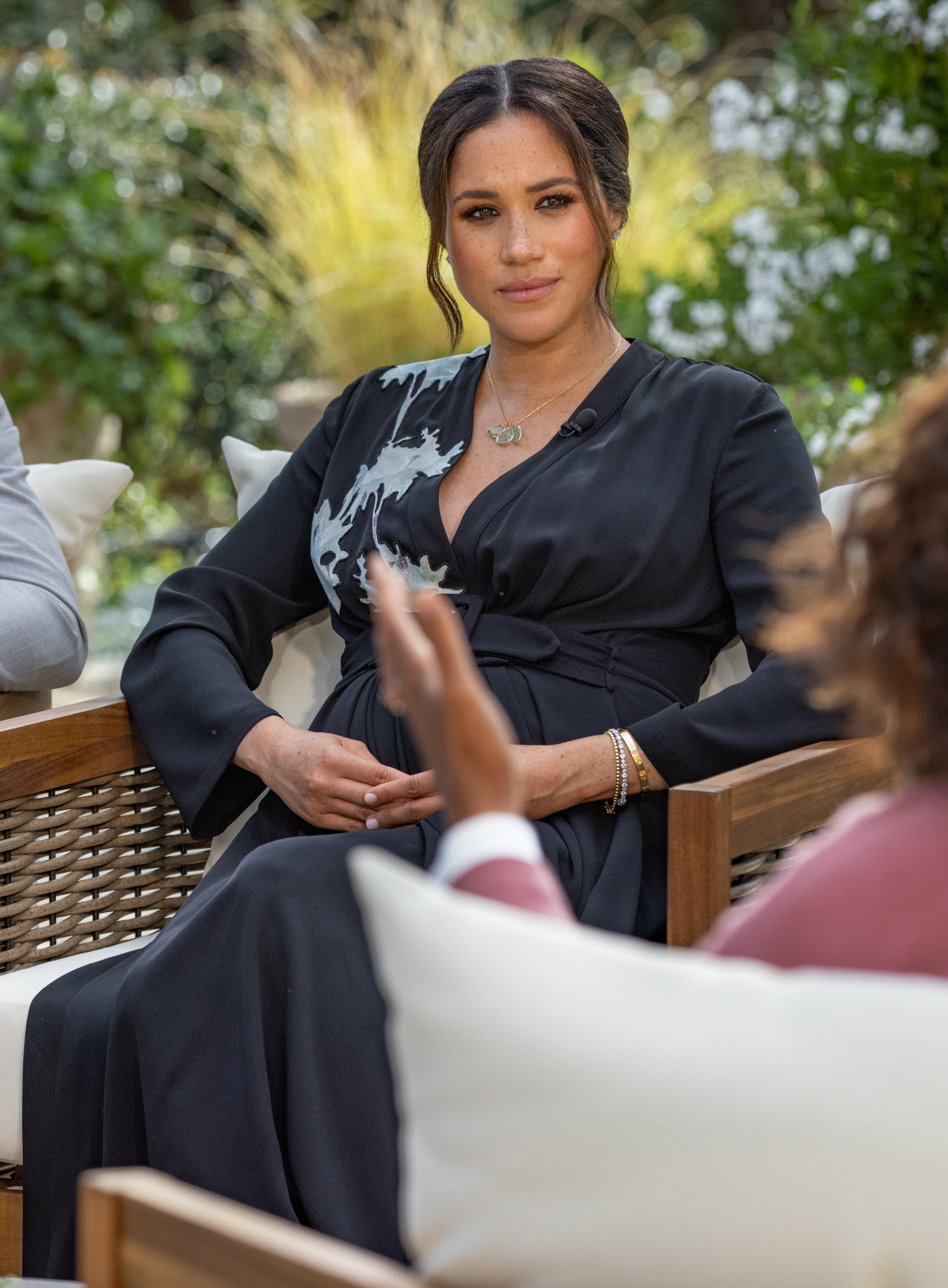 Meghan sparked numerous debates after her whirlwind interview with Oprah after stepping back as a senior royal – but did you spot her jewellery?

Meghan opted for a mini gold tennis bracelet that will set you back £2,264.

It was designed by actor Tobey Maguire’s estranged wife, Jennifer Meyes, and she described the bracelet as a “true staple”. 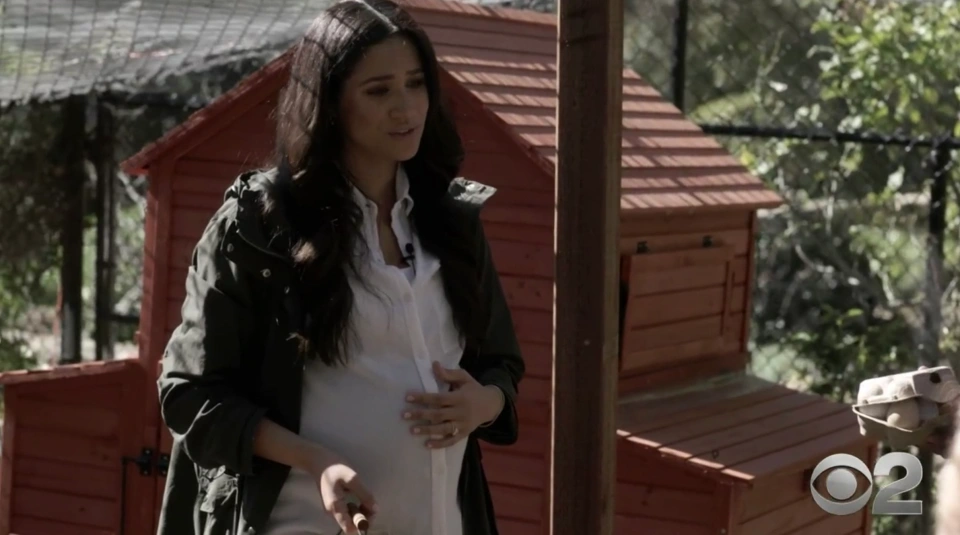 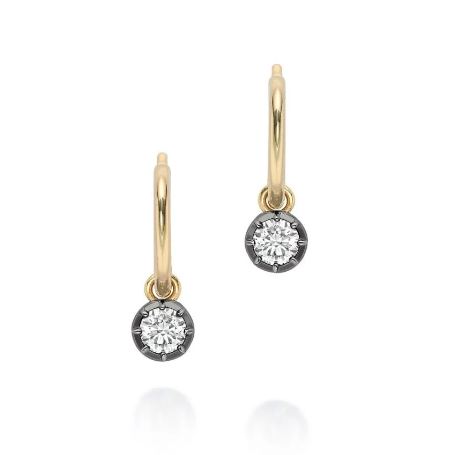 When the former actress gave Oprah a tour around her Californian home, this included visiting Archie’s chicken coop.

But that didn’t stop her from going full glam and wearing a pair of £2,950 earrings paired with her wellies and wax jacket.

The dazzling diamonds were from designer Jessica McCormack, who is a hit with the likes of Victoria Beckham and Rosie Huntington Whitley.

Meghan previously wore an £8,800 Tattoo Diamond necklace by Jessica which was inspired by Maori carvings – three times last year during her trip to New Zealand. 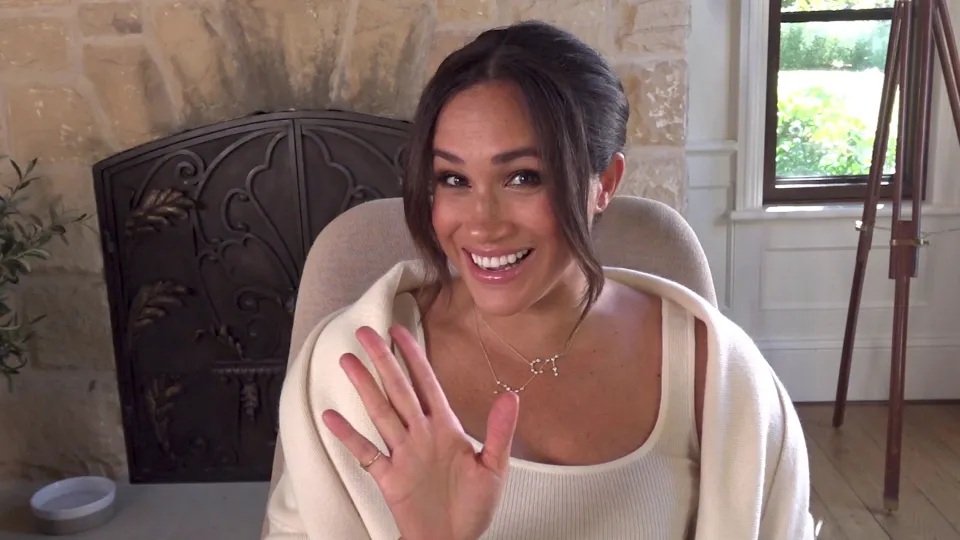 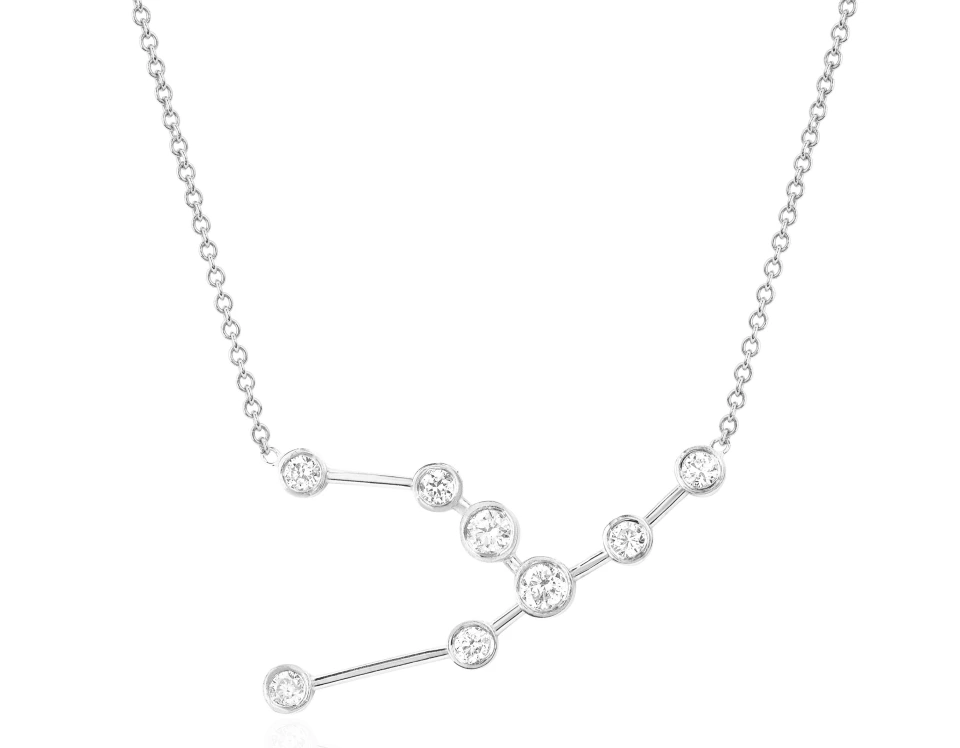 The necklaces were star sign constellations of her kids’ births

Meghan released a video in honour of her 40th birthday and her necklaces had a very poignant secret meaning.

The Duchess of Sussex wore two astrological necklaces from LA brand Logan Hollowell, which featured the star sign constellations of her two children, Archie and Lilibet.

Archie was born on May 6, 2019, which makes him a Taurus, and Meghan is wearing the corresponding necklace, which is worth £1,149.

Meanwhile, Lilibet was born on June 4 last year, making her a Gemini, with her constellation necklace setting Meghan back £1,282, bringing the total of the two necklaces to £2,431.

Seen on Meghan: November 2021 for The Ellen Show 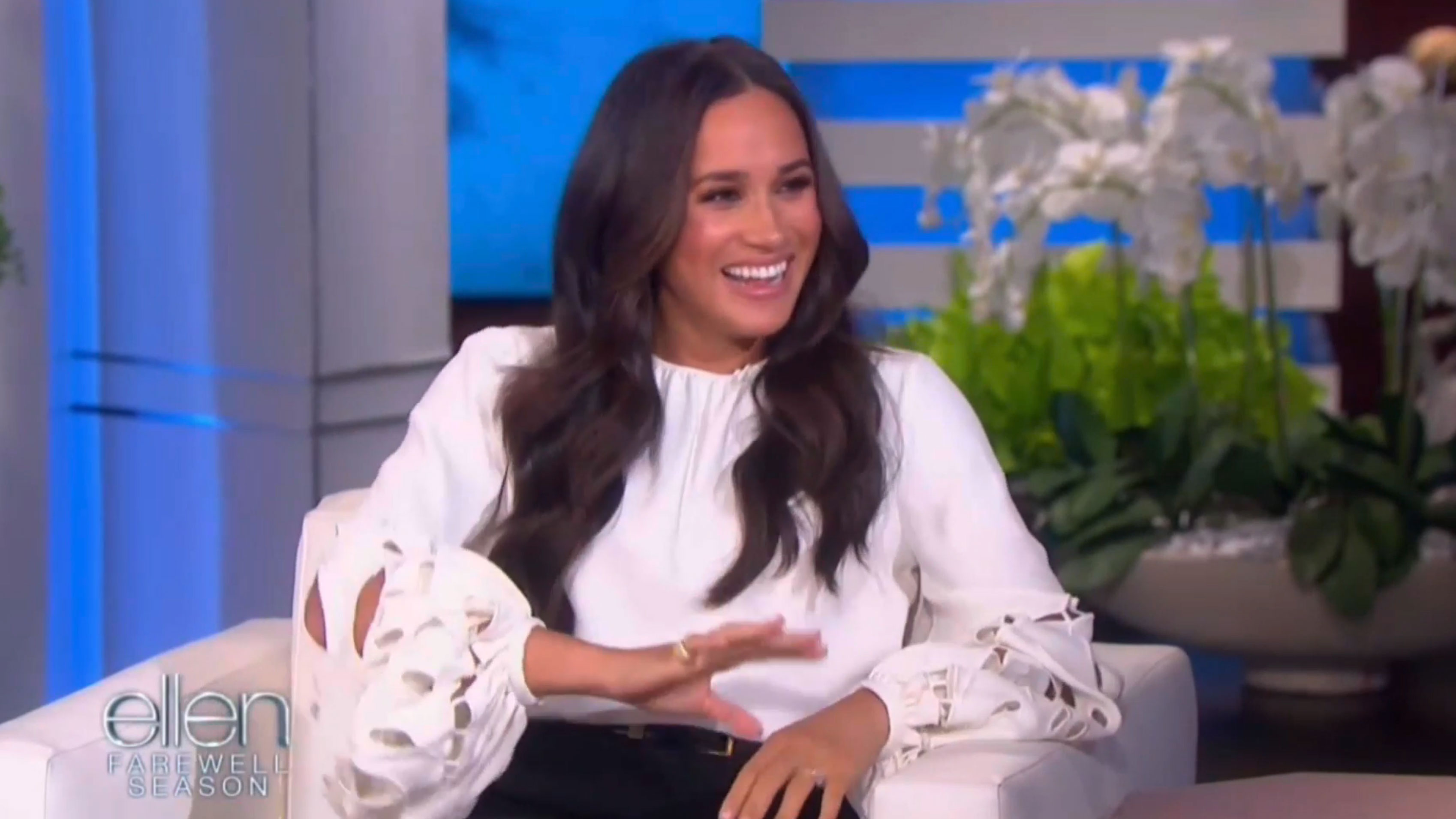 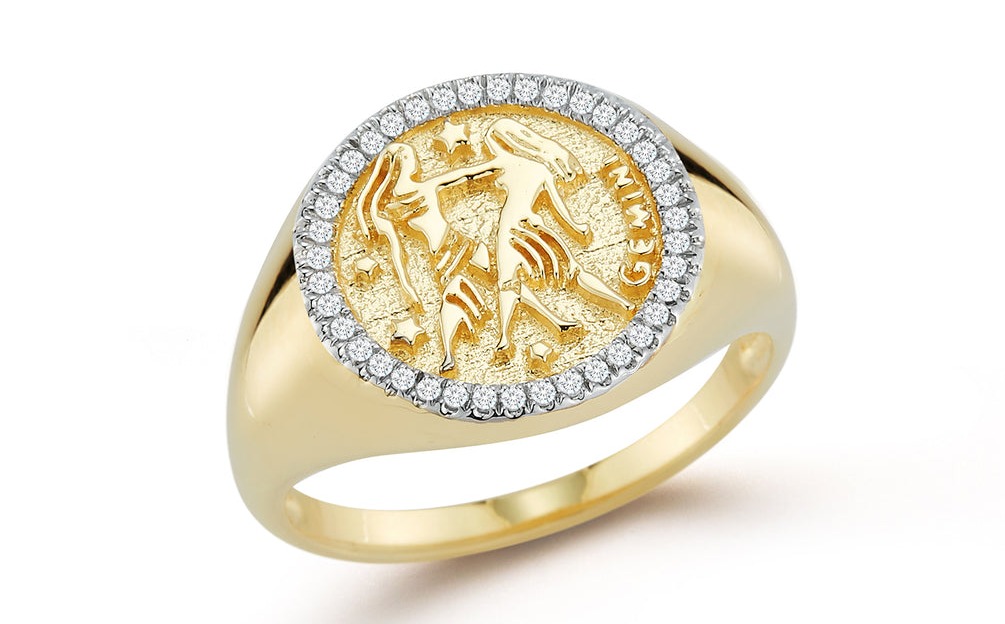 Meghan’s ring was a Mateo design and was made from solid 14kt yellow goldCredit: Not known, clear with picture desk

During her appearance on The Ellen Show last year, Meghan was seen wearing a £1,547 14kt Gold Zodiac Coin Ring by the brand Mateo.

It is made from solid 14kt yellow gold and set with brilliant diamonds.

The website description says: “They are indeed a must have and is the perfect accruement to your existing jewellery collection. Choose your sign.” 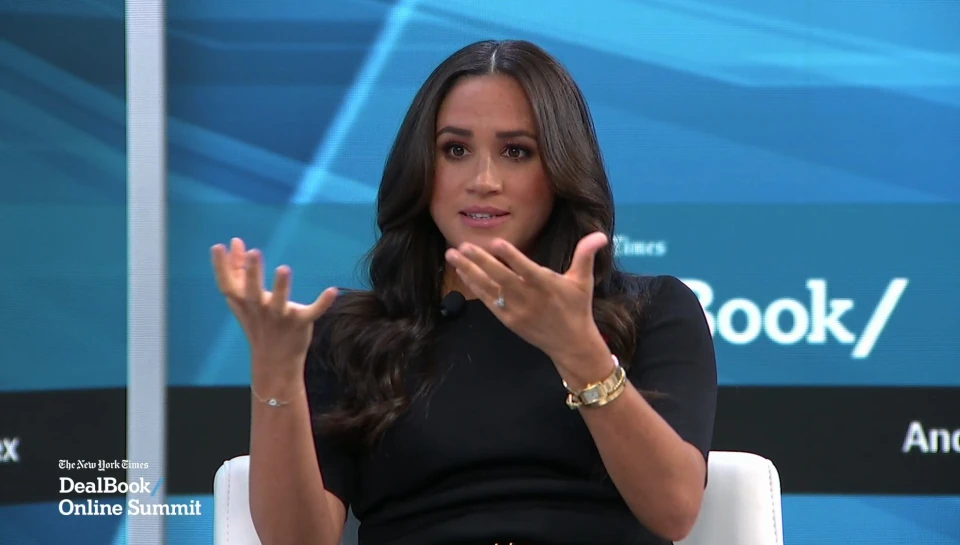 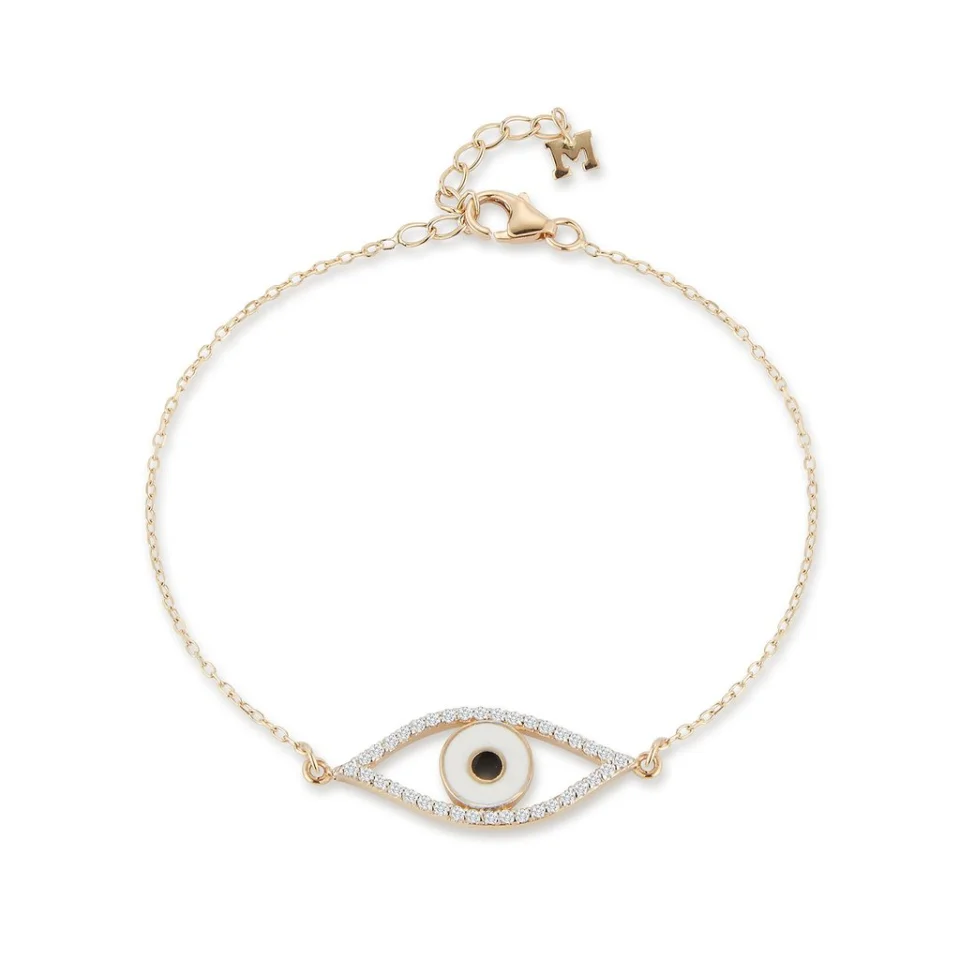 The £1,108 bracelet is said to ‘ward off undesired energy’

The Duchess of Sussex was seen wearing the gold-and-diamond Eye of Protection bracelet designed by Matthew Harris of Mateo New York.

The £1,108 bracelet description reads: “The Eye of Protection is a classic and essential piece which you will never want to take off. 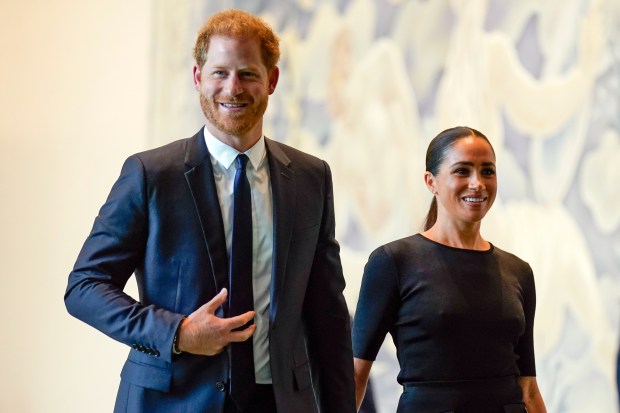 “Ward off undesired energy with this bracelet and attract good vibes only.”

This is not the first time that Meghan has relied on the evil eye symbol, having been seen wearing it during her royal tour of Africa with Prince Harry.

Meg wore a £450 18-carat chain, by Turkish-inspired jewellery designer Alemdara, as she gave a speech at Nyanga township in Cape Town.

According to the designer’s website: “As per Ottoman legend, an evil eye on your person wards off jealousy from others.” 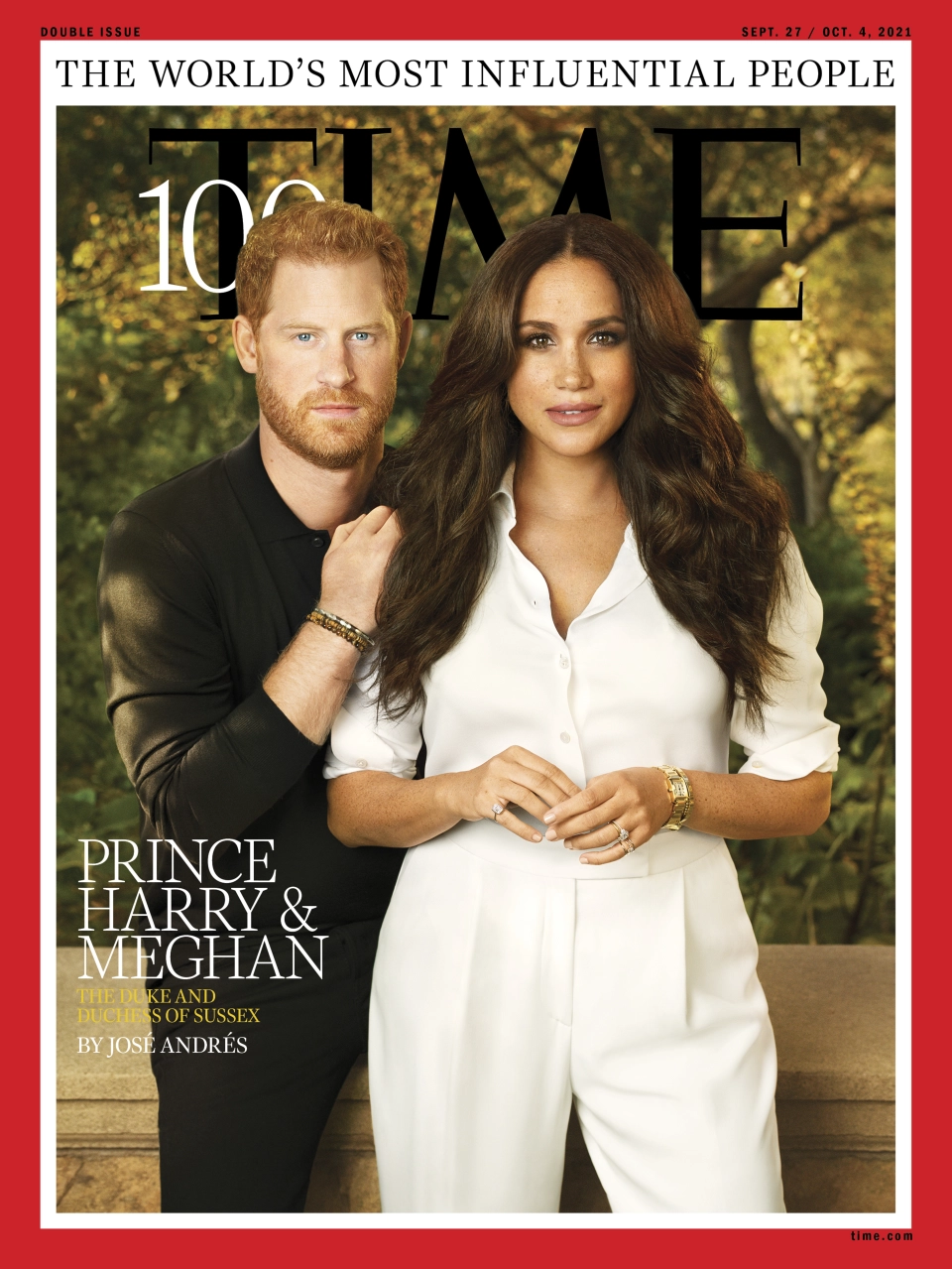 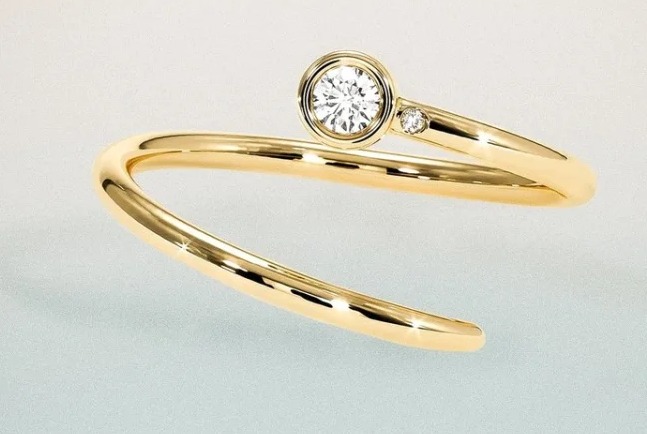 The Duet Pinky Ring has two diamonds of differing sizes

The Duet Pinky Ring has two diamonds of differing sizes on a spiral design, which are meant to represent two women coming together.

The rings are a poignant choice and are said to “represent one woman supporting another through a pinky promise”. 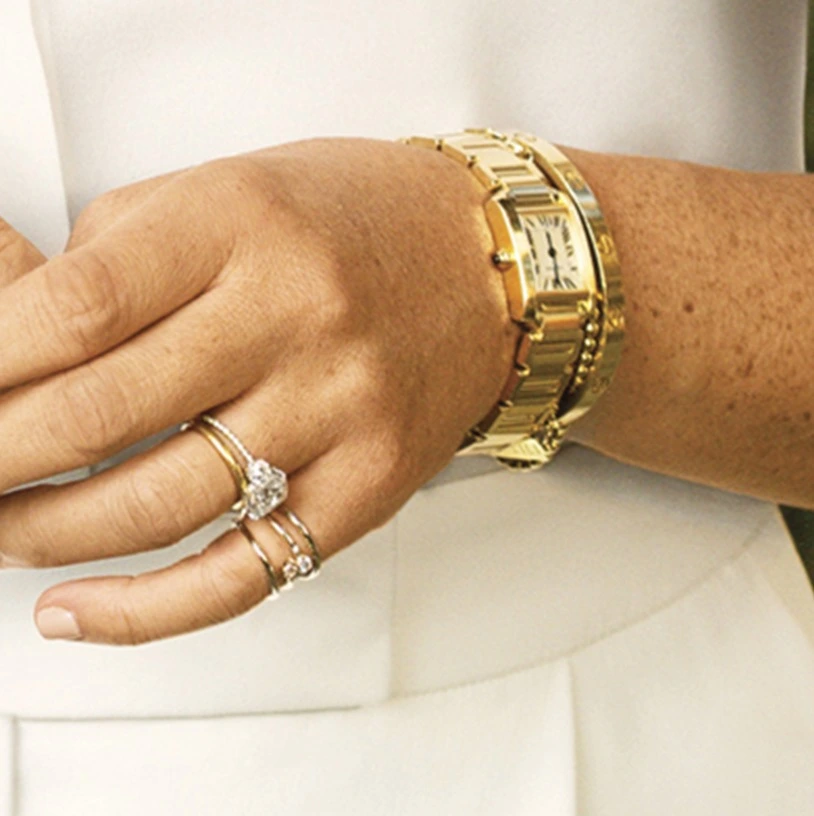 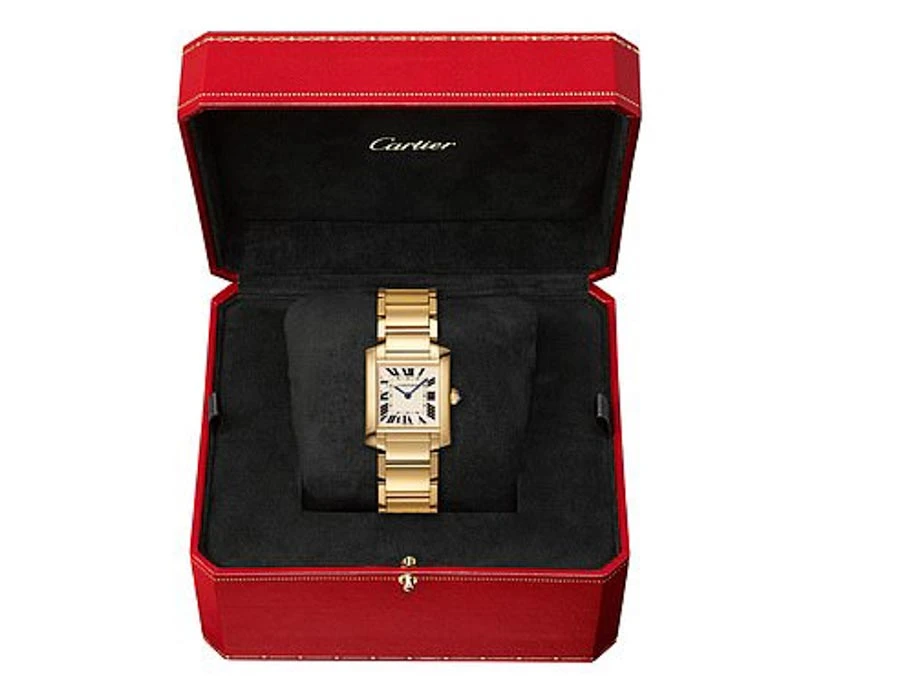 The £17,800 Cartier watch once belonged to Harry’s mother

Meghan was seen wearing a pricey Cartier watch that once belonged to Harry’s mother, Diana.

Although it was said to be worth $23,000 when it was given to Diana from her father, it would likely sell for much more now given its royal history.

Meghan also wore a Cartier Love bracelet for the shoot

Alongside her Cartier watch, Meghan wore a £5,800 Cartier Love bracelet, which we’ve seen in the past.

It is thought to have been a gift from Prince Harry after they started dating. 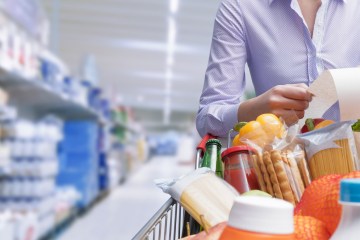 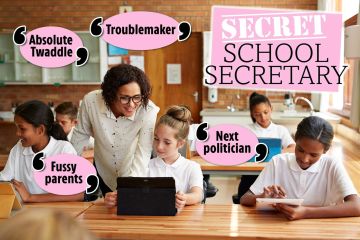 The 18ct Cartier band, which is made of two C-shaped halves screwed together, is said to have been inspired by medieval chastity belts.

It even comes with its own screwdriver so you can remove it from your wrist.