Kim Kardashian and Kanye West Split After 6 Years of Marriage

Officially over. Kim Kardashian and Kanye West have called it quits after tying the knot in 2014, Us Weekly can confirm.

The 40-year-old reality star filed for divorce on Friday, February 19. According to TMZ, she is seeking joint legal and physical custody of their four kids. The news comes one month after Us confirmed Kardashian and West, 43, were in settlement talks after she had divorce lawyer Laura Wasser on “retainer” since the summer of 2020.

“[Kim] will continue to focus on her business empire,” a insider told Us in January as the divorce loomed. “Kim has been in individual counseling and is at peace with where her life is headed.”

The Keeping Up With the Kardashians star and the rapper began dating in April 2012. At the time, Kardashian was still legally married to Kris Humphries, from whom she split after only 72 days of marriage. Her divorce was finalized in June 2013.

Kardashian and the Grammy winner held a lavish wedding ceremony in Florence, Italy, in May 2014, nearly one year after welcoming their first child together, daughter North. They also share son Saint, born in 2015, daughter Chicago, born in 2018, and son Psalm, born in 2019. 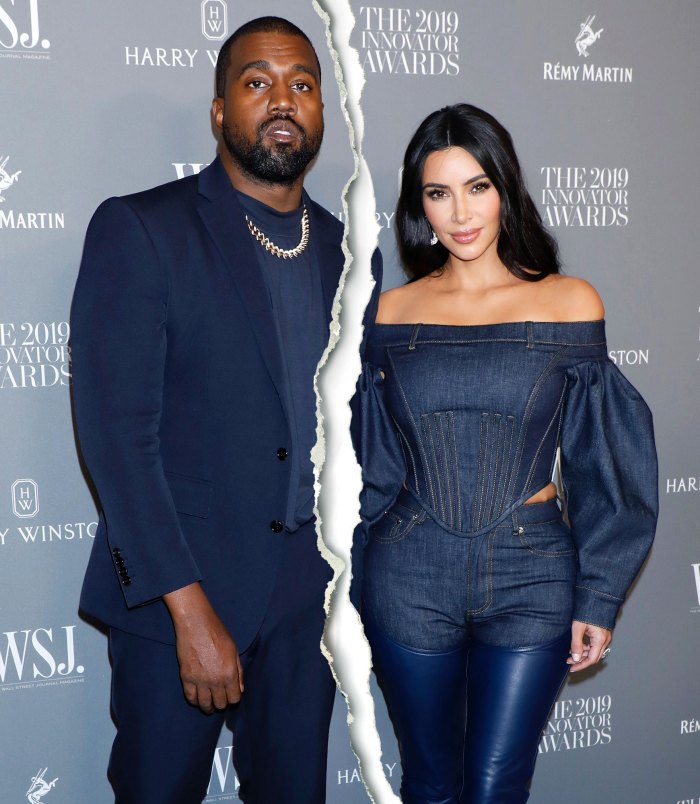 Us Weekly exclusively revealed that they “had a big fight” in December 2020. “Kanye blew up at Kim and she was really upset. Things between them don’t seem to have healed since that,” the source added as speculation that the reality star and West were heading for a split continued.

A separate source noted that it was “only a matter of time” before Kardashian reached her breaking point with the Yeezy designer, while a third insider explained that the duo had “been living separate lives for many months.”

“Kim and Kanye haven’t been on the same page for a while now,” the source told Us, noting that Kardashian was “done” with West’s “unpredictable” outbursts. “Kanye isn’t as focused and doesn’t live in the real world. Their world views no longer line up.”

Throughout their marriage, the couple were subject to widespread media attention, especially after West confirmed that he would be running for president in the 2020 election. The Chicago native announced his campaign platform via Twitter in July, and at the time, an insider told Us exclusively that the KKW Beauty founder was ready to stand by her man.

“Kanye has been planning this for years and Kim has known about his aspirations and has been supportive,” the source added. “Kanye is passionate about arts and education and wants to support in any way he can.”

Despite her apparent excitement over her husband’s political ambition, Kardashian’s tune may have changed after West’s emotional first campaign rally in South Carolina. The “Jesus Walks” rapper struggled to hold back tears in front of a crowd in July, where he discussed everything from his feelings about Harriet Tubman to his rocky path to fatherhood.

An insider told Us the day after West’s rally that the reality star and her family were “definitely concerned” about the controversial display. However, the billionaire told the crowd that he would “be at peace” if Kardashian decided to divorce him after his speech.

Days later, West tweeted that he had “been trying to get divorced” for two years. Kardashian subsequently addressed his battle with bipolar disorder for the first time, and he eventually apologized for “going public with something that was a private matter.”

When the rapper went on a second rant in September and tweeted a video of himself urinating on one of his Grammy Awards, another source told Us that Kardashian was “considering her options when it comes to her future” with her now-estranged husband.

Before West announced his bid for the White House, a source revealed that the couple had been having a difficult time adjusting to life in quarantine amid the coronavirus pandemic.

“Kim feels like she needs some space from Kanye,” the insider said in May, adding that West had a tendency of being “super-controlling” toward his wife. “She is trying to be a great mom, focus on law school and her work commitments and it’s hard to do all of this without Kanye helping as much as he can. … Kim’s been feeling as though he’s been trying to impose his views on her life.”

Five months later, West gave his wife a thoughtful 40th birthday present, surprising her with a hologram of her late father, Robert Kardashian Sr., who died of esophageal cancer in September 2003. While some fans noticed that the “Stronger” rapper was absent from the pictures Kim posted of her private island celebration in October 2020, a source told Us that West joined the festivities eventually.

“He arrived late because of work commitments,” the insider said. “But was there the last few days of the trip.”