Kim Kardashian and Kanye West: The Way They Were

Kim Kardashian and Kanye West‘s romance quickly blossomed when they started dating in April 2012 — but they didn’t get their happily ever after.

The KKW Beauty founder opened up about her earliest memories with West during the Keeping Up With the Kardashians 10th anniversary special, which aired in 2017. “I met him I think in 2002 or 2003,” she recalled at the time. “He was recording a song with Brandy, and I was her friend. I vividly remember hanging out with him, and then they did a video together, so I’d see him a few times. He was asking his friends: ‘Who is this Kim Kardajan?’ He didn’t know what my name was.”

Over the years, the duo dated other people before their paths crossed once again. After splitting from Kris Humphries in October 2011 after 72 days of marriage, Kardashian noticed her feelings for the “Jesus Walks” rapper start to fully form.

“I think I had to go through that to figure out what I wanted,” she explained on the KUWTK special in 2017. “After my breakup, I was feeling really low and down and he said, ‘Just come to Paris and see my fashion show.’ He jokes that he put on this whole fashion show just to get a date with me.”

The Grammy winner went on to propose on Kardashian’s 33rd birthday in October 2013, four months after her divorce from Humphries was finalized. Their wedding took place in Florence, Italy, in May 2014. During an interview on The Alec Baldwin Show in October 2018, the reality star got real about the need for balance in her relationship with West.

Kardashian and the Yeezy designer share daughters North, born in 2013, and Chicago, born in 2018, and sons Saint, born in 2015, and Psalm, born in 2019. In January 2021, Us Weekly exclusively reported that the California native was “done” with West and that they had “been living separate lives” for some time after facing a challenging year.

At the time, a source revealed that the pair were in settlement talks after Kardashian secured famed celeb divorce lawyer Laura Wasser on “retainer” in the summer of 2020. After weeks of speculation about the state of their marriage, the Skims CEO filed for divorce in February 2021.

Scroll down for to relive Kardashian and West’s sweetest PDA moments ahead of their split.

Kimye’s happily ever after! See how Kim Kardashian and Kanye West‘s sweet romance blossomed since they started dating in April 2012.

Kardashian and West hit the Los Angeles Lakers’ NBA playoffs game together May 12—but neither of the smitten stars seemed particularly interested in the action on the floor.

The head-over-heels pair held hands on their way to the April opening of Scott Disick’s new restaurant in NYC. “[Kanye] loves” Kim’s family, a source tells Us Weekly.

The pair strolled hand-in-hand on their way out of a matinee of the hit show Wicked in NYC April 29.

Kris, Is That You?

Kim shared a sweet smooch with Kanye on the set of her Vogue Italia photo shoot May 13. The short wig she sported left her looking a lot like her mother, Kris Jenner — and had onlookers doing double takes!

West embraced Kardashian from behind after lunching in London May 20. “They’re the real deal,” a source tells Us. “I’ve never seen her like this.”

The Look of Love

“It was my first time to Cannes!” a Balmain-clad Kim told Us of her trip to the legendary film festival with West May 24. “I loved it!”

Later that night, West grabbed his love’s famous booty as she lovingly stroked his face. “She’s making him gentler,” a source explains of the couple’s dynamic. “He isn’t so intense now.”

A day after the rapper shocked the world and announced he was going to be a father, West marked New Year’s Eve with Kardashian in Las Vegas. The pair affectionately hugged at 1 Oak Nightclub at the Mirage Hotel as they welcomed 2013.

She said yes! Kanye popped the question on the evening of Kim’s 33rd birthday on October 21. The surprise proposal included renting out AT&T Park in San Francisco and projecting “Pleeease Marry Meee!!!” onto the stadium screen. West then bent down on one knee and popped the question with a mega Lorraine Schwartz cushion-cut ring.

The #WorldsMostTalkedAboutCouple landed themselves the highly coveted cover of Vogue’s April 2014 issue. In the editor’s letter, Anna Wintour wrote that the decision was “entirely our idea.”

So stylish! In the weeks leading up to their wedding, North West’s glam parents attended their second-ever Met Gala in May 2014, wearing custom-designed Lanvin outfits. Kardashian looked lovely in a layered blue gown by Alber Elbaz that exposed her toned legs, while West looked fashion-forward in a sharp black velvet tux.

The reality star and rapper said “I do” after a whirlwind wedding weekend extravaganza in May 2014. The couple had their rehearsal dinner in Paris, followed by a formal wedding ceremony in Florence at the Forte di Belvedere the next day. The Kardashian clan also visited the Eiffel Tower and had a private tour and dinner at the Palace of Versailles while in Europe.

West grabbed Kardashian’s most famous bodily asset on the red carpet of the Grammys in February 2015, while the two exchanged an affectionate peck.

Kardashian shocked fans when she stepped out in Paris with platinum blond locks on March 5, 2015. She later sat front row with West while taking in the Balmain show.

Kimye looked smitten with each other while posing for photos at the 2015 CFDA Awards at Alice Tully Hall in Lincoln Center in NYC on June 1, 2015. At the time, the reality star was pregnant with their second child, Saint West.

Then-pregnant Kardashian offered West a sweet smooch prior to the rapper accepting the 2015 Michael Jackson Video Vanguard Award at the MTV Video Music Awards in Los Angeles on August 30, 2015.

The couple looked happier than ever while celebrating West’s Yeezy Season 3 launch at Madison Square Garden on February 11, 2016. The fashion show also marked the premiere of his seventh studio album, The Life of Pablo. The sold-out presentation/listening party was a family affair and marked the first public post-hospitalization appearance for sister Khloé Kardashian’s ex-husband, Lamar Odom.

The husband-and-wife duo wore matching ensembles to the 2016 Met Gala in New York City on May 2, 2016. West made headlines for pairing his bedazzled jacket with simple jeans and bright blue contacts. The theme of the gala was Manus x Machina: Fashion in an Age of Technology.

A slimmed-down Kardashian accompanied West to the 2016 MTV Video Music Awards on August 28, 2016, where he had four minutes of freedom to express himself. As previously reported, he used the time to debut his raunchy “Fade” music video and give his frenemy Taylor Swift a shout-out.

Another year, another fashion show! Kardashian looked sleek and slim at West’s Yeezy Season 4 fashion show at Franklin D. Roosevelt Four Freedoms Park on New York’s Roosevelt Island on September 7, 2016. The show caused headlines after West made attendees wait two hours before models fell on the catwalk in their uncomfortable-looking shoes and passed out from the heat.

The duo looked too cool for school at the Balmain afterparty in Paris on September 29, 2016. The event marked the last public appearance Kardashian and West made before the Selfish author was robbed at gunpoint in their Paris apartment on October 3, 2016.

Kardashian shared a sweet family Christmas photo on Instagram on December 27, 2016, in which she and West posed in front of an enormous Christmas tree with their kids, North and Saint.

The power couple were photographed holding hands during a romantic Valentine’s Day dinner date at the Italian restaurant Carbone in New York City on February 14, 2017.

Kardashian shared a series of sweet Easter photos with West and their kids on Instagram on April 17, 2017. During the family’s Easter celebration, West dressed up in a bunny costume.

The couple were spotted outside Craig’s in West Hollywood in January 2018, days before they welcomed their third child — daughter Chicago — via surrogate. Four months later, they celebrated their fourth wedding anniversary. 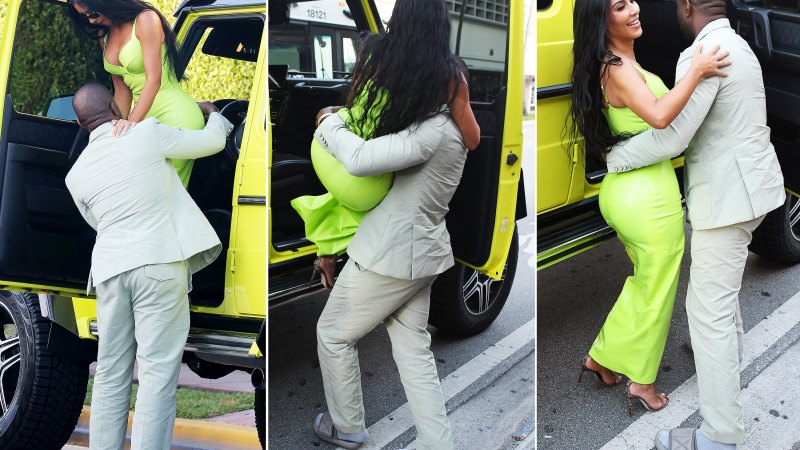 The “XCTY” singer lifted his wife from their oversized Mercedes as she smiled down at him before grabbing ice cream at a Haagen-Dazs in Miami Beach in August 2018. Earlier in the day, the couple attended an “intimate” wedding ceremony for rapper 2 Chainz and Kesha Ward at the Versace Mansion. 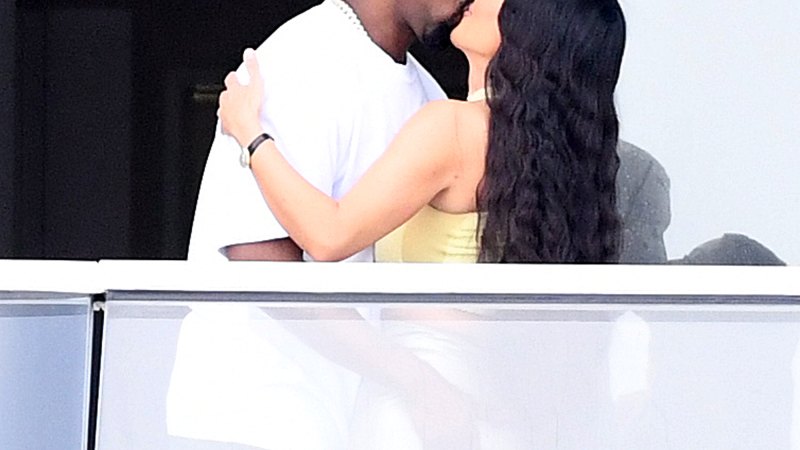 Kardashian and West shared a sweet kiss on the balcony of their Miami condo in January 2019, days after the rapper gifted the $14 million unit to his wife for Christmas. 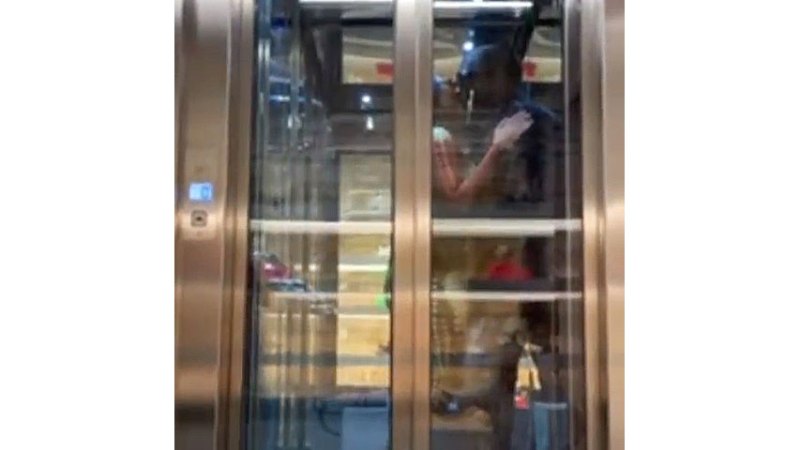 The twosome locked lips in a steamy video posted to Kardashian’s Instagram Story in February 2020. As they made out in a glass elevator, The Ronettes’ “Be My Baby” played in the background. 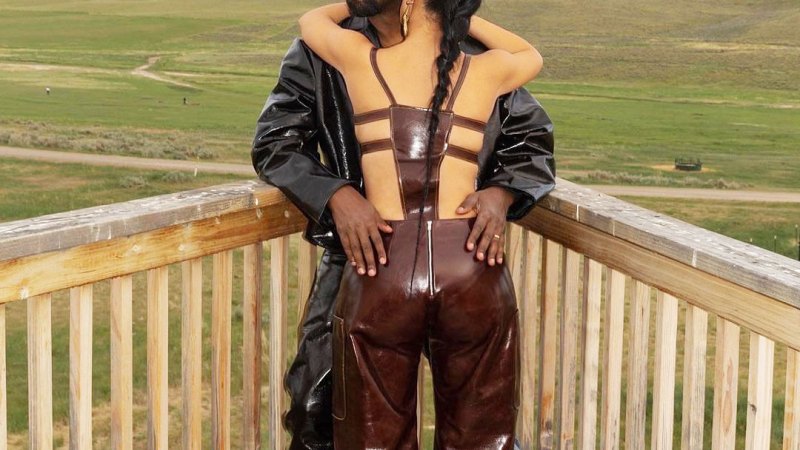 In some of her last social media snaps with West before their February 2021 split, Kardashian wrapped her arms around the “Stronger” artist’s neck in a tight hug. West, for his part, rested his hands on his then-wife’s butt.