A little strong? Kim Kardashian and more of Kylie Jenner’s famous family and friends turned up to celebrate her 25th birthday, but the Skims mogul wasn’t completely up to party.

Does anyone have a shot I can take?” the 41-year-old Kardashians star said in a Thursday, August 11, TikTok video shared by Jenner. “OK, OK!”

After the 25-year-old Life of Kylie alum — who was in the midst of opening a special birthday present from mom Kris Jenner — and her guests cheered on Kardashian’s willingness to partake in their “25 shots for the party girl” plan, things didn’t go quite as smoothly as expected.

The Selfish author, who wore a bright orange gown, was then spotted puckering her face while downing the drink. However, she quickly spit its contents back into her glass. “It’s so f—king …,” Kardashian started to say in the Thursday footage. 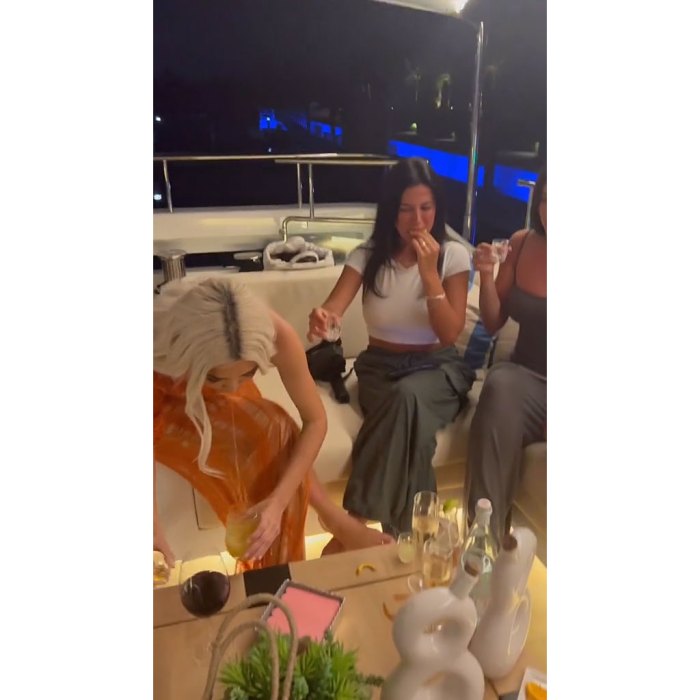 Kardashian didn’t let her inability to take the shot spoil the group’s fun in what Kylie called her “best bday” while staying on a massive yacht. The birthday girl, Kardashian, the 66-year-old Safely founder, Kendall Jenner and their friends partied on a boat before watching fireworks and opening presents.

“I’m excited! Mom, this paper is [amazing],” Kylie gushed over her perfectly wrapped present from Kris, which was revealed to be a limited edition Hermés Birkin bag.

“What’s it gonna be, ladies?” Kylie asked daughter Stormi and niece Chicago, both 4. “[It’s] gorgeous. I’ve never seen anything like this before.”

As the Kylie Baby founder cuddled up to her rust-colored purse, Kylie revealed that Hermés had only made three versions of her new accessory.

While fans were unable to see what other presents Kylie received on her special day, she was honored by several glowing social media tributes hours earlier.

“Happy Birthday party gal (in LaLa’s voice this whole trip lol). Every year you amaze me at how wise, protective of your loved ones and just how generous your heart is,” Kardashian — who shares North, 9, Saint, 6, Chicago, and Psalm, 4, with ex-husband Kanye West — wrote via Instagram on Wednesday, August 10. “You are so special and one of one. You have so much love and happiness in your love that I pray for this forever. Happy birthday @kyliejenner I love you so much!!! Forever and Ever!!!”

The makeup mogul’s boyfriend, Travis Scott — with whom she shares Stormi and a son, born in February — also praised his longtime partner on Wednesday. “Happy f—kkkkkking birthday mi 🤎 🤎 🤎 🤎 🤎 🤎 🤎 🤎,” the Cactus Jack founder, 31, captioned Instagram Story slides on Wednesday. “That’s the ‘I want it now’ loook.”

Cool for the summer! JoJo Siwa opened up about her journey toward discovering her sexuality — and which fellow celebrities...