From fan to costar! Before Margot Robbie and John Cena teamed up in The Suicide Squad, they had a surprising history together.

During a joint appearance on Jimmy Kimmel Live on Wednesday, July 21 — alongside guest host Anthony Anderson and The Suicide Squad director James Gunn — the Birds of Prey actress, 31, confessed her former fandom.

“I watched WWE when I was growing up; when I was a kid I loved The Undertaker,” Robbie said in the interview. “And then obviously, when I was a teenager, I kind of stopped watching. But then, as a late teen, early 20s, I had a boyfriend who was obsessed with John Cena, so much so that he dressed as John Cena for his 21st birthday and had a cardboard cut-out of John Cena in his bedroom.”

That’s right, Robbie’s boyfriend at the time had purchased a life-size cutout of the 44-year-old F9 actor. So, every night when she went to bed, Cena was there to watch over her.

“So I slept in a room for two years with a life-size cardboard cut-out of John Cena in the room,” she added, explains that seeing his 2-D face in the corner of the room would startle her if she woke up in the middle of the night. “And then I’d be like, ‘Oh, it’s just John Cena, it’s OK.’”

When the costars first met, Robbie was initially wary about revealing her former passions to the former wrestler yet ended up spilling the beans some “five seconds into meeting him.”

After the Once Upon a Time… In Hollywood star told the story, she explained, “Now I know that there’s very little to weird out this guy!”

Anderson, 50, then brought out a gift for the action star after hearing about the costars’ history: A cardboard cut-out of Robbie as Harley Quinn. 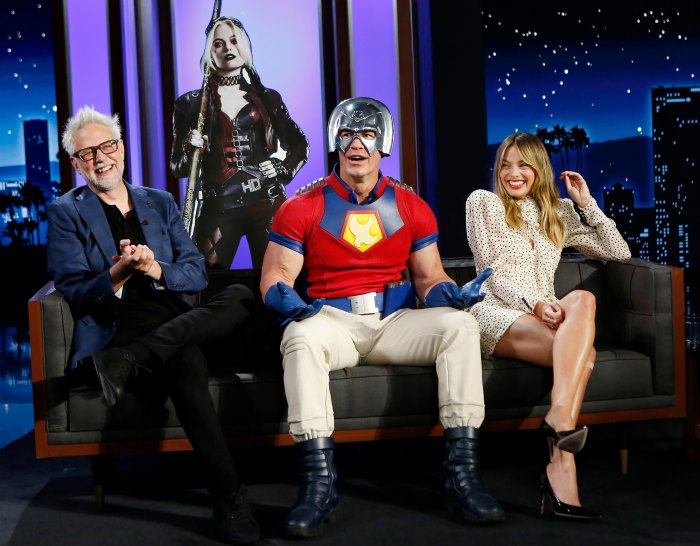 “You also have to sleep with that in your room for two years,” Robbie jokingly said. “Just to level the playing field,” to which Cena nonchalantly agreed.

During the segment, the director, 54, revealed his own history with the Black-ish alum. Gunn explained that when he wrote the Scooby-Doo movies in the early 2000s, Anderson was brought in to read for a few of the characters.

“I wanted to congratulate you on your success because we haven’t seen each other in 20 years,” Anderson remarked.

The actors star in Gunn’s take on The Suicide Squad alongside Idris Elba, Sylvester Stallone, Taika Waititi and Viola Davis, which is slated for release on August 6.