But will she perform “Party in the U.S.A.”? Miley Cyrus volunteered to be a part of Gwen Stefani and Blake Shelton’s upcoming nuptials — as their wedding singer.

The “Midnight Sky” singer, 28, offered to lend her voice to the couple’s special day after the No Doubt frontwoman, 51, praised her recent performance on NPR Music’s Tiny Desk (Home) series. 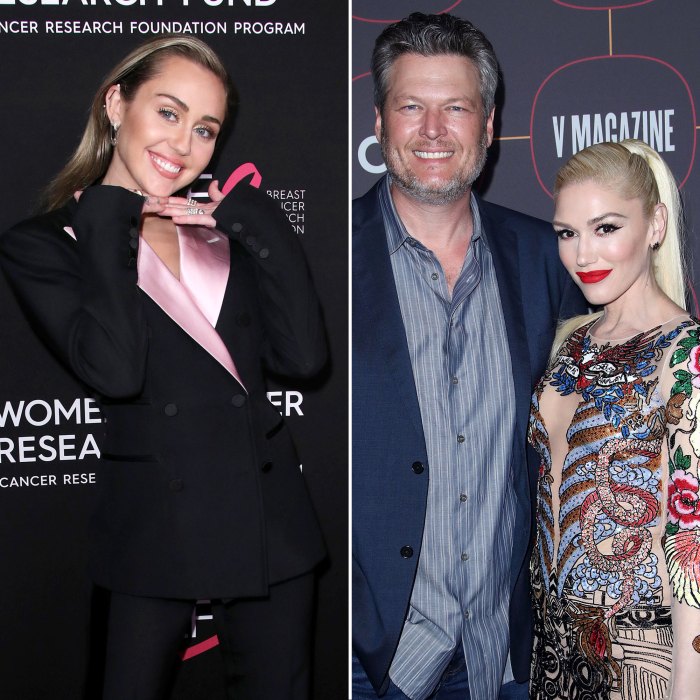 Cyrus then tagged Shelton, 44, in the conversation, tweeting, “I’ll be your wedding singer! I promise to be on my best behavior. Or worst. whatever you want! It’s your special day! Cheers to loving you both almost as much as you love each other!”

While the country singer did not respond, Stefani showed interest in taking the Last Song actress up on her offer. She replied, “Thanks puppy” with emojis of a red heart, a dog and a kissy face.

The Voice coaches announced their engagement in October 2020, nearly five years after Us Weekly broke the news that they were dating. The “Let Me Reintroduce Myself” songstress was previously married to Gavin Rossdale from 2002 to 2016; they share sons Kingston, 14, Zuma, 12, and Apollo, 6. Shelton, meanwhile, was married to Miranda Lambert from 2011 to 2015.

Stefani gushed over the “God’s Country” crooner’s “really magical” proposal during an appearance on The Tonight Show Starring Jimmy Fallon in January, admitting that she had been waiting for the big moment for a while.

“I gotta tell you, I was sort of like, ‘What’s happening with us?’” she said. “It was kind of in my mind. ‘We’ve been together a long time now. What’s going on?’ I was in that place in my head.”

A source recently told Us exclusively that Shelton “built a chapel on the grounds of his Oklahoma ranch” for his wedding to Stefani. A second insider revealed that the spouses-to-be “have been in prenup talks for months,” calling the process “extremely effortless” without any “hiccups or outrageous demands.”