The 39-year-old Crazy Rich Asians star, for her part, initially shared a gallery of behind-the-scenes snaps from set on Thursday, captioning it, “Now on @disneyplus 💫.” In two of Chan’s photos, she posed with the “Woman” crooner, 27, while they were both dressed in their official superhero suits. 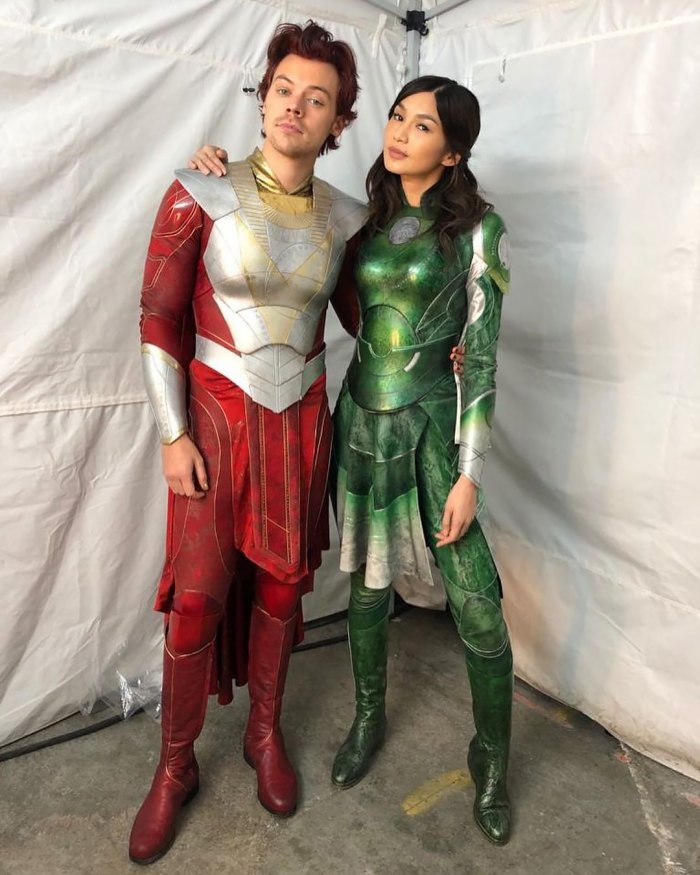 The former One Direction member wasn’t included in most of the MCU flick — which was first released in November 2021 — before making a blink-and-you-miss-it cameo in a highly anticipated post-credits scene. Styles saunters down the Domo’s hallway alongside a CGI troll (voiced by Patton Oswalt), interrupting Thena (Angelina Jolie), Makkari (Lauren Ridloff) and Druig (Barry Keoghan) as they theorize how to save their fellow Eternals.

“I’m Eros, this is Pip, and you are as beautiful as legends say, Thena,” Styles, who plays Thanos’ brother, said in the scene. “Pip and I are here to help. Your friends are in big trouble. We know where to find them.”

While the My Policeman star was briefly onscreen, he made a notable impression on his fellow Eternals actors and the director, Chloé Zhao.

“Harry as Eros was very much a package deal for me,” the Nomadland director, 39, told Deadline in November 2021. “I pitched the idea of Pip the Troll and Eros to Kevin [Feige, Marvel Studios President] a while back, and I love the idea of exploring an Eternal who is beyond Titan and who may have influenced Thanos throughout the years the same way Eternals influenced us, earthlings.”

She added at the time: “And then, it wasn’t like I suggested Eros, and, ‘Let’s go find actors.’ I kept tabs on Harry since Dunkirk, I thought he was very interesting. After meeting him I realized he is that character — the same way I cast the rest of my cast. There’s so much of Eros in him.”

The Cheshire, England, native made his film debut in 2017’s Dunkirk before getting cast in Wilde’s forthcoming Don’t Worry Darling opposite Florence Pugh, where the director and “Watermelon Sugar” singer first connected on set.

“Little known fact: most male actors don’t want to play supporting roles in female-led films,” Wilde gushed over her boyfriend via Instagram in February 2021 after the movie wrapped. “The industry has raised them to believe it lessens their power (i.e financial value) to accept these roles, which is one of the reasons it’s so hard to get financing for movies focusing on female stories. No joke, it is harrrrrd to find actors who recognize why it might be worth it to allow for a woman to hold the spotlight. … Enter: @harrystyles, our ‘Jack.’ Not only did he relish the opportunity to allow for the brilliant @florencepugh to hold center stage as our ‘Alice,’ but he infused every scene with a nuanced sense of humanity. He didn’t have to join our circus, but he jumped on board with humility and grace, and blew us away every day with his talent, warmth, and ability to drive backwards. 👊”

News of the pair’s romance made headlines in January 2021 after they were spotted holding hands at Styles’ manager’s wedding. Since then, the duo’s romance has continued to heat up and Wilde — who shares son Otis, 7, and daughter Daisy, 5, with ex-fiancé Jason Sudeikis — has been a strong supporter of her musician beau.

After the House alum was spotted at several of Styles’ “Love on Tour” concerts late last year, a source exclusively told Us Weekly in December 2021 that the couple have “started getting to know each other’s families,” and intended to spend “some of this holiday season together.”

Shutterstock (2)Hammering out the details. Kelly Clarkson has agreed to give her ex-husband, Brandon Blackstock, a five percent share of...

Everything Nick Jonas, Priyanka Chopra Have Said About Having Kids

A Timeline of His Famous Exes and Flings