The Missouri native succumbed to his year-long battle with lung cancer while at his home in Palm Beach, Florida, Us Weekly can confirm. He was surrounded by family at the time of his death. 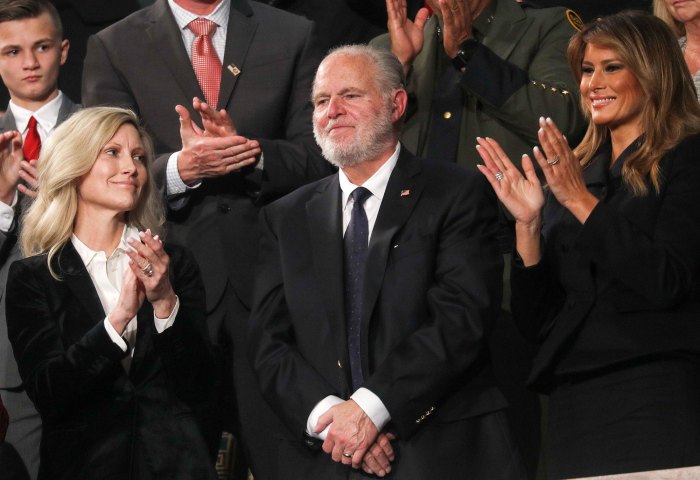 Radio personality Rush Limbaugh is honored by U.S. President Trump with a Presidential Medal of Freedom as he stands with first lady Melania Trump on February 4, 2020 in Washington, DC. Shutterstock

“We, the Limbaugh family, are deeply saddened to announce that our beloved Rush has died,” the statement read. “Rush Hudson Limbaugh III will forever be the greatest of all time, a courageous, brilliant gentle giant and radio pioneer. Our entire family is so thankful to everyone who prayed and cared for Rush, especially the audience he adored. Rush’s love for our country and for all of you will live on eternally.”

In the wake of his passing, iHeartMedia — which owns his program’s host, Premiere Radio Networks — also expressed their condolences.

“We’re deeply saddened by our dear friend Rush’s passing and share our deepest condolences with his wife Kathryn and the entire family,” iHeartMedia President Rich Bressler said in a statement on Wednesday. “Over the past year, Rush bravely shared his cancer battle with his listeners, inspiring and encouraging anyone suffering from illness.”

Bressler added, “With ‘talent on loan from God,’ Rush led the talk radio format for more than 30 years — a feat no other could have accomplished — and he set the standard for all those who followed. He was beloved by millions of fans across the country and we share the loss of their fearless leader.” 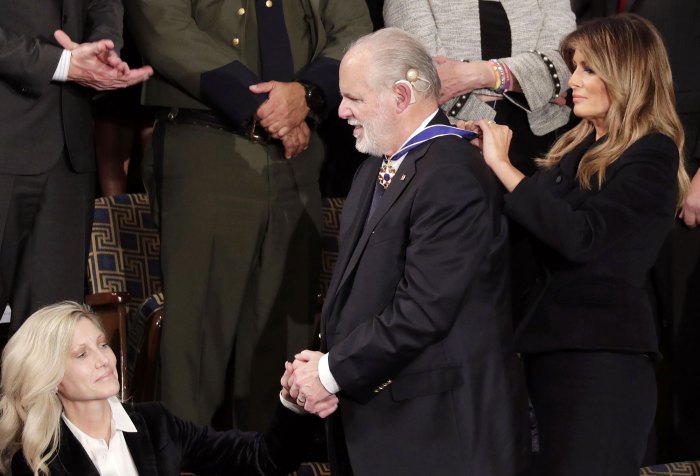 US First Lady Melania Trump places the Presidential Medal of Freedom on Rush Limbaugh (L) as his wife Kathryn (L) holds his hand on February 4, 2020 in Washington, DC. JUSTIN LANE/EPA-EFE/Shutterstock

Premiere Networks President Julie Talbott also said in a statement to Us, “Rush has had an incredible impact on my life and on the lives of all of our listeners. Over the many years we worked together Rush was a wonderful and inspiring colleague, and he will surely be missed.”

The broadcast pioneer first announced that he was diagnosed with the disease on The Rush Limbaugh Show in February 2020.

“I have to tell you something today that I wish I didn’t have to tell you,” he said at the time, revealing he was diagnosed the month prior. “It’s a struggle for me because I had to inform my staff earlier today. I can’t help but feel that I’m letting everybody down. The upshot is that I have been diagnosed with advanced lung cancer.”

He regarded disclosing the health update as “one of the most difficult days in recent memory” since he had been anticipating the moment.

The following day, former U.S. President Donald Trump awarded him the Presidential Medal of Freedom. “He is the greatest fighter and winner you will ever meet,” Trump, 74, said during the 2020 State of the Union address. “Rush Limbaugh, thank you for your decades of tireless devotion to our country … in recognition of all you have done for our nation, I am proud to announce tonight that you will be receiving our country’s highest civilian honor: the Presidential Medal of Freedom.”

Rush was best known for hosting his syndicated radio show, The Rush Limbaugh Show, beginning in 1988. He landed the gig after getting his start working at local stations in Missouri in the 1970s, using the moniker “Bachelor Jeff” Christie. He wouldn’t use his actual name on-air until the 1980s when he hosted a show in Kansas City, Missouri.

He has since become one of the most notable names in conservative media, oftentimes generating headlines for his controversial takes.