The fitness guru, 27, shared a screenshot of an article about him thanking Spears, 39, for helping his acting career via his Instagram Story on Sunday, November 21.

“Bringing sexy back is cool and all,” he wrote alongside the image. “But bringing (real) back in Hollywood is even sexier.” Asghari finished his post with a winking face with tongue emoji.

The reference to “bringing sexy back” immediately made fans think of the former ‘NSync member, 40, but the emojis hint that the Asghari Fitness founder might simply be having a laugh. 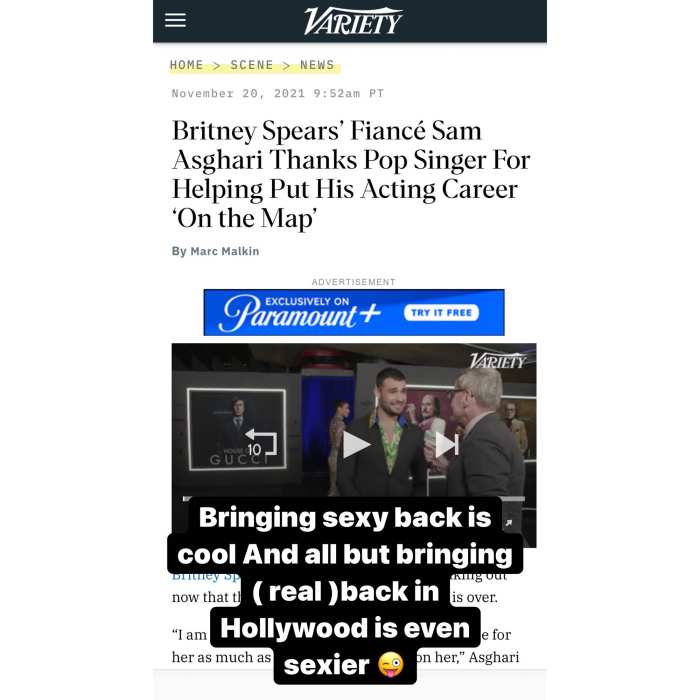 Long before Asghari’s September proposal to Spears, Timberlake and the singer took their romance public in 1999. They split in 2002 amid allegations that the “Baby One More Time” songstress had an affair, but the two don’t seem to be holding any grudges more than 20 years later.

The Las Vegas performer has shared several references to her ex on social media over the past couple years, and all her anecdotes have been very positive. In April 2020, the Louisiana-raised singer shared a video dancing to Timberlake’s “Filthy.”

In February 2021, the Tennessee native officially apologized to his ex-girlfriend after The New York Times Presents “Framing Britney Spears”​​​ was released.

“I’ve seen the messages, tags, comments, and concerns and I want to respond. I am deeply sorry for the times in my life where my actions contributed to the problem, where I spoke out of turn, or did not speak up for what was right. I understand that I fell short in these moments and in many others and benefited from a system that condones misogyny and racism,” he shared in a statement at the time. “I specifically want to apologize to Britney Spears and Janet Jackson both individually, because I care for and respect these women and I know I failed I also feel compelled to respond, in part, because everyone involved deserves better and most importantly, because this is a larger conversation that I wholeheartedly want to be part of and grow from.”

He later supported the #FreeBritney movement to release Spears from her conservatorship after hearing her bombshell testimony in June.

“After what we saw today, we should all be supporting Britney at this time,” he tweeted at the time. “Regardless of our past, good and bad, and no matter how long ago it was … what’s happening to her is just not right. No woman should ever be restricted from making decisions about her own body. No one should EVER be held against their will … or ever have to ask permission to access everything they’ve worked so hard for.”

The “Cry Me a River” singer added that he and wife Jessica Biel, who he married in 2013, “send our love, and our absolute support to Britney during this time. We hope the courts, and her family make this right and let her live however she wants to live.”

The conservatorship was terminated earlier this month after 13 years.

Shutterstock (2)Hammering out the details. Kelly Clarkson has agreed to give her ex-husband, Brandon Blackstock, a five percent share of...

Everything Nick Jonas, Priyanka Chopra Have Said About Having Kids

A Timeline of His Famous Exes and Flings