She said yes! After Us Weekly confirmed on Wednesday, July 21, that Scheana Shay and Brock Davies are engaged — just one day after she was spotted wearing a diamond ring in Los Angeles — she’s spilling all the tea on the romantic, balloon-filled proposal.

Shay, 36, shared a snap just after the big moment via Instagram on Friday, July 23. In the pic, the couple kissed underneath a white-and-gold balloon arch as she showed off her new diamond. There’s also a large “Marry Me” sign attached to the archway and an array of rose petals on the floor.

The Bravo star detailed her excitement in a caption, “I SAID YES!!!!! ? We are engaged!!! Thank you to @brock__davies for making me the happiest girl in the world and to @kylechandesign for making me the most gorgeous ring ever!! #itsallhappening ??.”

Davies, 35, shared another shot of the pair from the occasion via his Instagram with the caption, “I need you….”

The Vanderpump Rules alum further dished on the proposal during the Friday edition of her podcast, “Scheananigans with Scheana Shay” alongside Davies and her cohost, Jamie Lynne. They titled the episode, “First Comes Love, Then Comes ________ !” While announcing the news, the model showed off her “huge” engagement ring on camera in the Patreon recording.

Shay’s ring was designed by Kyle Chan, who “crushed it” with the 12.73-carat, Morganite stone with additional diamonds around the band. The main stone is cushion cut, “which makes it look so good in the light,” Davies added in the episode, “I thought it was big, and then I put it on and was like, ‘It’s perfect.’”

The Homebody founder revealed that he cried “happy tears” once he picked out the ring for his soon-to-be fiancée and that they both cried after signing a prenup. 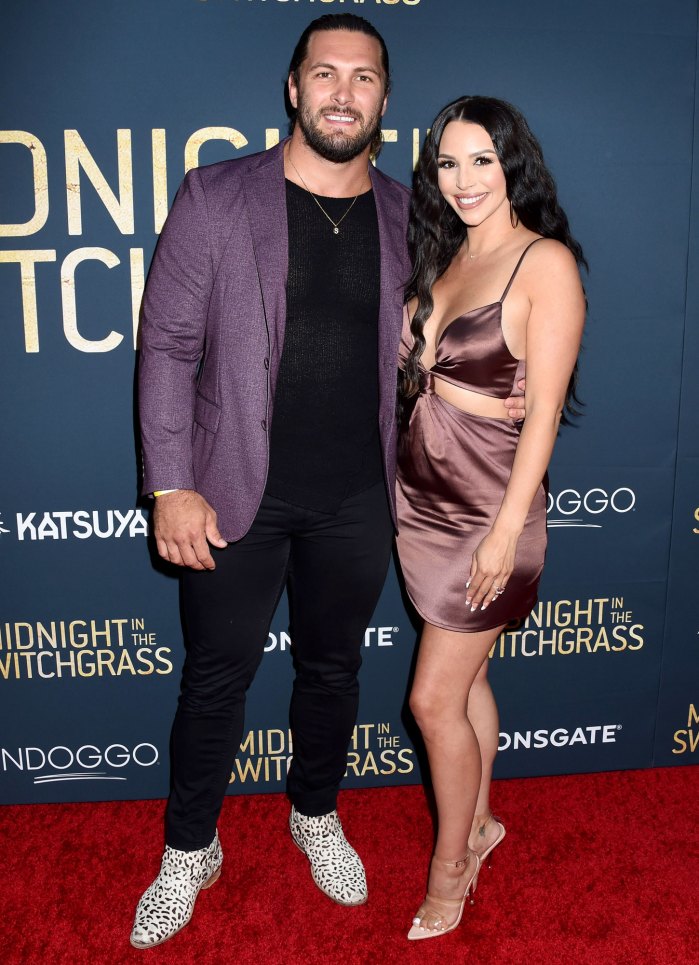 Brock Davies and Scheana Shay at a special screening for ‘Midnight in the Switchgrass’ on July 19, 2021 in Los Angeles, California. Broadimage/Shutterstock

“I think … in my head, I was like, ‘OK, if I get the ring, I can figure everything else out … then it hit me … and I got a little teary-eyed,” Davies said during the podcast. “I was stoked.”

The Bravo reality star previously dished that the pair talked about marriage, especially after welcoming their daughter Summer, in April.

“So, we definitely knew that we wanted to make it official sooner rather than later,” she explained. “After we signed the prenup, we come upstairs and he walks in the door and he’s like, ‘Oh, wait, Summer and your mom are doing something really cute, I want it to be a surprise. So, just wait outside for a second.’ I’m like, ‘OK, he’s up to something.’”

Davies then blindfolded the podcast host with a tie before walking her into the kitchen, where he presented her with a “beautifully printed, typed-out letter that has the edges burned,” like a letter in a bottle.

The letter — which featured edges that Davies burned himself — had the reality star in tears after only reading the first few words.

“So, I read that, and then all of a sudden, like a f–kin’ wizard magician, he like bends down and pulls out this huge bouquet of flowers,” Shay said.

She noted that, at the time, it looked like the fitness trainer was about to get down on one knee right there, but instead he stood back up.

“I wanted to take a knee but fake her out,” Davies chimed in before he guided her — with the blindfold back on — out to the balcony. When she opened her eyes again, she found the rose petals all over the balcony, the huge balloon arch and the “Marry Me” sign before her partner got down on one knee for real.

While they both revealed they had “no recollection” of what Davies said to Shay at the time, she added, “It was one of those moments when I emotionally blackout” before she saying, “Of course” to his big question.

The couple doesn’t have any concrete wedding plans yet but plans to wait until 2022 when they can travel again, so the former rugby player’s family can attend too.

“We’re very happy to share this news,” Shay concluded the 35-minute episode. “It hasn’t really felt real until last night when I wore my ring for the first time.”