Seeking help. After sharing a series of allegedly suicidal messages, Sinead O’Connor has been admitted to the hospital.

The “Nothing Compares 2 U” songstress, 55, announced her forthcoming hospital stay via Twitter on Thursday, January 13. The messages have since been deleted from her page.

The Ireland native’s hospital stay announcement came hours after she shared a series of since-deleted concerning messages about taking her own life.

“I’ve decided to follow my son [Shane O’Connor]. There is no point living without him. Everything I touch, I ruin. I only stayed for him. And now he’s gone,” the Grammy nominee tweeted on Thursday, according to CNN. “I’m sorry. I shouldn’t have said that. I am with cops now on way to hospital. I’m sorry I upset everyone.”

She allegedly added at the time: “I am lost without my kid and I hate myself. Hospital will help a while. But I’m going to find Shane. This is just a delay.”

Less than one week earlier, the musician announced that her 17-year-old son had died via a Twitter message. Shane had been reported missing in Newbridge, Ireland, several days earlier.

“My beautiful son, Nevi’im Nesta Ali Shane O’Connor, the very light of my life, decided to end his earthly struggle today and is now with God,” the songstress wrote on January 7 in a since-deleted message. “May he rest in peace and may no one follow his example. My baby. I love you so much. Please be at peace.”

At the time, she grieved her loss by dedicating Bob Marley’s “Ride Natty Ride” to the late teenager, writing, “This is for my Shaney. The light of my life. The lamp of my soul. My blue-eye baby. You will always be my light. We will always be together. No boundary can separate us.”

Before O’Connor’s Thursday hospital stay, she has been candid about her mental health struggles over the years, even attempting suicide multiple times in the past.

“Sinead is safe and well,” a spokesman at the Pearse Street Garda Station in Dublin, Ireland, told Us Weekly in November 2015 after the singer posted a disturbing note via Facebook. 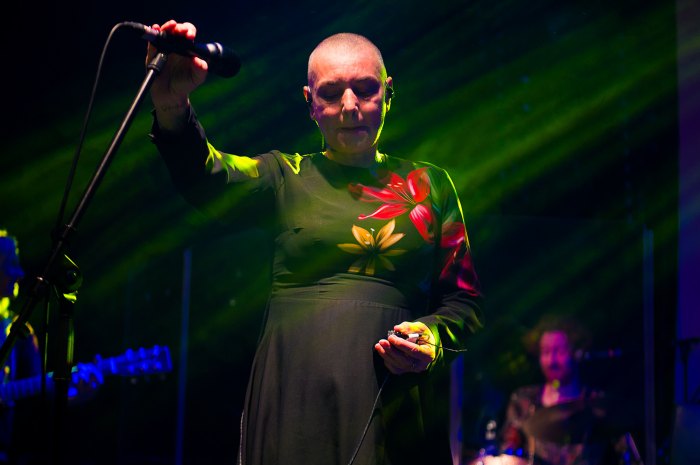 “The last two nights have finished me off,” the “Feel So Different” performer wrote at the time. “I have taken an overdose. There is no other way to get respect. I am not at home, I’m at a hotel, somewhere in Ireland, under another name. There is only so much a woman can be expected to bear. … After everything I’ve been put through, and been forced to go through alone, they wouldn’t know if I was dead until weeks from now. Apparently, I’m scum. Well done guys, you’ve finally got rid of me. Sorry the penny didn’t drop sooner. I’m an idiot. Everyone is better off. Never do this to a woman again.”

If you or someone you know is contemplating suicide, call the National Suicide Prevention Lifeline at 1-800-273-8255.

Their little ones! Emmy Rossum, Jeremy Allen White and more stars from Shameless have offered a glimpse at their off-screen...

Mike Sorrentino Defends Angelina Pivarnick Feud: I ‘Had To’

Chris Lane Preparing for 2 Kids Under 2 With Lauren Bushnell, Album