While out and about, Ariel Winter’s hands were full with a giant roll of bubble wrap and packaging tape in L.A, November 8.

No chauffeur for him! Despite being worth a reported $400 million, Arnold Schwarzenegger is perfectly fine with getting behind the wheel in L.A., November 4.

Chris Pine starts a long day on set with a cup of java in L.A., November 4.

Offset handed out free food to voters while they waited on line to cast their ballots in Atlanta, November 3.

Lily Allen gets hot drinks and baked treats to go in NYC, November 2.

They Take Out The Trash!

Jax Taylor has no problem doing his share of the household chores while wife Brittany Cartwright is pregnant. (Pictured in L.A., October 26)

They Schlep Their Stuff!

Claire Danes’ hands are full as she hauls a large box of diapers on a trolly and carries a package in NYC, October 22.

Rebel Wilson has no problem filling up her own tank in West Hollywood, October 20.

Simon Cowell takes a sip during a family shopping trip in L.A., October 18.

Katie Holmes and Emilio Vitolo Jr. head to their destination via subway in NYC, October 15.

No fancy florist for Chrissy Teigen! The model picks up a pretty plant from Ralphs supermarket instead in L.A., October 20.

They Ride The Train!

Jaimie Alexander forgoes a taxi and takes the subway like a true New Yorker. (NYC, October 14)

Tyler, the Creator grabs lunch with a pal in West Hollywood, October 6.

They Snack On Treats!

Liev Schreiber double dribbles — literally — while taking on son Sasha, 13, during a game of basketball in NYC, September 30.

They Walk Their Dogs!

They Go To The Hair Salon!

“I love to bring Santi into the kitchen with me,” Eva Longoria says of cooking with her 2-year-old son. (September 29)

Dominic Cooper takes his two-wheeler for a spin around town in London, September 21.

What a big shot! Gavin Rossdale has a mean swing in L.A., September 23. 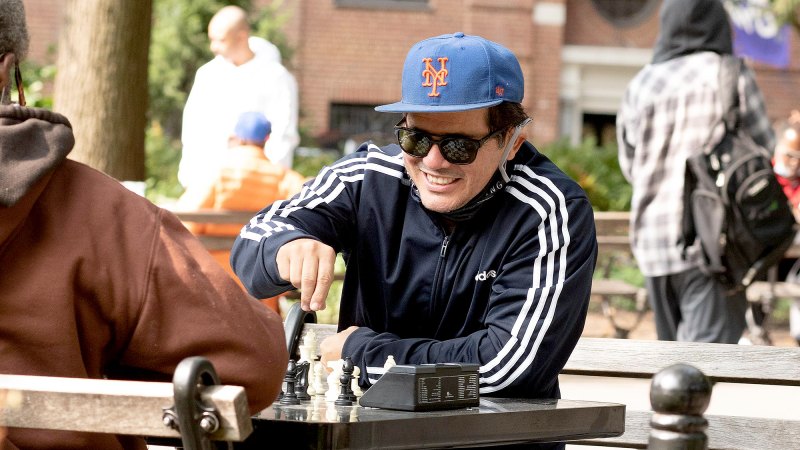 They Play Chess In The Park!

They Talk To Their Dogs!

Mother of dogs! Emilia Clarke takes Ted out for a game of fetch in London, September 14.

A drink in the afternoon? Wine not! Jennifer Lopez enjoys a lunch outing with her younger sis, Lynda, in NYC, September 7.

They Pay The Meter!

Joaquin Phoenix avoids a ticket while out and about in L.A., September 3.

Kendall Jenner and Hailey Bieber stock up on fresh fruits and veggies in L.A., September 7.

Taye Diggs also stays toned by doing circuit training: “I need to relieve stress and hit it hard, and feel like I’ve been to work afterward,” he’s said of his workouts. (Pictured in Santa Monica, August 26)

It looks like John Legend and Chrissy Teigen will be cooking up a storm (as per usual) in the near future! (Pictured in Beverly Hills, August 31)

They Homeschool Their Kids!

Hailey Bieber grabs a green juice while wearing Tna for Aritzia shorts. “I’m not the saint of healthy eating,” the model has said, but “I do try to balance things out.” (Pictured in L.A., August 17)

Salma Hayek starts every day with a cup of café! (Pictured in Greece, August 20)

They Shop For Groceries!

They Do At-Home Spa Treatments!

Can’t read their poker faces? Salma Hayek safely plays a round of cards with her brother and father on August 9.

Shia LaBeouf? More like LaBuff! The fit actor goes for a jog in Pasadena, California, August 7.

They Collect Their Mail!

The USPS was here! Kate Beckinsale grabs the post in L.A., August 5.

They Wash Their Car!

And pump this own gas! Terry Crews treats his Escalade right in Beverly Hills, August 5.

It looks like Chrissy Teigen is having a pizza party, in L.A., August 4.

They Play In The Sand!

Amy Schumer isn’t afraid to get her hands dirty! (August 3)

Brooke Shields gets her game face on to feel the burn in The Hamptons, New York, July 28.

They Bond With Their Kids!

Courtesy of Dwayne “The Rock” Johnson/Instagram

They Grab Drinks To Go!

Ayesha Curry says her first time paddle boarding with hubby Stephen was “serene and perfect for clearing the mind.” (July 26)

Arnold Schwarzenegger rides like the wind in L.A., July 21.

They Feed Their Pets!

“I like knowing that my fur babies are eating good quality food,” says Miranda Lambert. (July 21)

Jerry O’Connell doesn’t have a problem with self-service. (July 20)

Brooke Burke is “all about” working out at home, she tells Us. “No excuses, you can do it anywhere.” (Pictured in Malibu, July 14)

They Walk Their Dogs!

Or, as in this case, their dogs walk them! Alessandra Ambrosio steps out with her fur babies in L.A., July 14.

They Drop Off The Mail!

Brooke Shields heads to the post office to send some packages in The Hamptons, New York, July 8.

They Load Up On Groceries!

From the looks of her cart, Malin Akerman won’t need to food shop again for a long time. (Pictured in L.A, July 4)

Even Prince William fancies a pint on a warm summer day in Snettisham, England, July 3.

Martha Stewart tells Us she “always” eats fresh organic produce from her garden. We dig it! (Pictured in Bedford, New York, June 24)

Brooke Shields enjoys exercising on a ball “for a full-body burn,” she says. (Pictured in the Hamptons, New York, June 30)

Ariel Winter picks up what appears to be a large package of skincare goodies in L.A., June 29.

Harry Styles steps out to get his caffeine fix in London, June 29.

Tamera Mowry chops carrots, scallions, and other veggies for her take on homemade fried rice, in Napa Valley, California, June 23.

Pierce Brosnan wraps himself in a towel postdip in the Aloha state of Hawaii, June 19.

Ali Larter wheels a cartful of goods from Whole Foods to her car in L.A., June 18.

They Go To The Dentist!

Tooth be told, we can’t tell if Diane Kruger is pumped or scared for her dental appointment in L.A., June 18.

They Walk The Dog!

Best buds! Adam Sandler and his bulldog go for a stroll on the beach in Malibu, June 16.

Halle Berry loves using a yoga wheel on her muscles because it “helps manage my stress levels and releases the negative energy”. (June 12)

Justin Bieber continues to perfect his swing in L.A., June 15.

They Play On The Beach!

Alessandra Ambrosio shows off her paddle board skills in L.A., June 10.

They Take The Trash Out!

They don’t call her a Real Housewife for nothing! Dorit Kemsley checks an item off her to-do list in L.A., June 8.

Melissa Gorga gets in tip-top shape for summer with help from her hubby, Joe, in Montville, New Jersey, June 8.

Kerry Washington gives herself a moment to “breathe more love and power” in light of the current events, on June 6.

They Check Their Phone!

Even Today’s Savannah Guthrie likes a bit of screen time during a commercial break in NYC, June 2.

Now that’s talent! Kaia Gerber works on her masterpiece despite a broken right arm, in L.A., May 26.

Amber Heard jokes that she’s been having a “love affair” with her cast-iron skillet. (May 20)

They Walk The Dog!

Lucy Hale steps out for some fresh air with Elvis in L.A., May 25.

Reese Witherspoon’s been drinking her go-to green smoothie “every single day” for eight years. That’s commitment! (Pictured in L.A., May 26)

Drew Barrymore began her “perfect Sunday” with Dear Girls by Ali Wong, on May 24.

NBA, sign him! Justin Bieber stays active by shooting some hoops in Beverly Hills, May 25.

Nama-slay! Mindy Kaling finds her Zen with a lunge and prayers hands on May 14.

Jennifer Garner is ready to do some wash with help from a glass of vino, in L.A., May 18.

“We both just love the fitness space,” Alex Rodriguez tells Us about staying fit with Jennifer Lopez. “We like to work out.” (Pictured in Miami, May 18)

It’s just another day of checking off quarantine chores for Naomi Watts. (Pictured in The Hamptons, New York, May 17)

Kate Hudson is “spending more time than ever in the kitchen these days,” she says. (Pictured in L.A., May 15)

Sometimes even Hollywood legends like Sylvester Stallone need a midday snooze. (May 5)

Not even a global pandemic can stop Shia LaBeouf from getting a jog in in Pasadena, California, May 4.

Lovebirds Brie Larson and Elijah Allan-Blitz goof off — safely! — at the farmers’ market in Malibu, May 3.

They Mow The Lawn!

Who’s surprised that multitalented Martha Stewart does her own gardening? (Pictured in Bedford, N.Y., May 4)

Casey Affleck moves his mask to drink some water in L.A., May 2.

Heidi Montag, who once told Us she exercises a whopping 14 hours a day, keeps up with her fitness routine in L.A., April 29.

They Go On Juice Runs!

Gugu Mbatha-Raw lies back and relaxes in a hammock on her birthday in L.A., April 22.