THERE are many strings to Charlotte Crosby’s bow – seasoned reality star, social media influencer, podcast host and millionaire businesswoman to name a few.

But now she can add successful campaigner to the list, after speaking out so powerfully against a documentary dedicated to dissecting her looks that it was pulled from the airwaves.

Charlotte has bravely spoken out about the effect the documentary had on herCredit: MARK HAYMAN / FABULOUS MAGAZINE

“[Speaking out] achieved more than I could have ever hoped,” she exclusively told Fabulous.

“It’s been phenomenal. I got an apology from the channel and they took it down so you can’t watch it anywhere, which was the biggest win. I do applaud them for that.”

Broadcast on Channel 5 in April, What’s Happened To Your Face? included references to the former Geordie Shore star’s “rubber lips” and “plastic face” and featured a team of experts discussing Charlotte’s appearance and weight.

The episode – which aired without Charlotte or her team being notified, despite the production company having been warned a year previously that it would be harmful to her mental health – prompted more than 7,000 complaints to regulator Ofcom.

Charlotte, although humiliated and devastated at the time, found the strength to fight back via Instagram.

“At a time when the media world was backing a policy of ‘be kind’, Channel 5 and Crackit Productions decided to commission this one-hour special on ‘rubber-lipped Charlotte’ (their words, not mine),” she wrote in a post the following day.

Her words prompted swift action from Channel 5, who removed the programme from its streaming service and issued an apology to Charlotte. At the time of going to print, Ofcom was still investigating.

“I feel like we’ve started a movement now,” she says. “I will stand up for anyone else it happens to and I won’t let anything like that happen to me again.”

There’s no escaping the fact that Charlotte, 31, looks very different from the girl who started out on Geordie Shore 10 years ago.

She’s the first person to admit that, and has been open about the extensive cosmetic work (nose job, fillers and Botox) she’s had.

And as someone in the public eye, she accepts there is going to be some interest in her changing face. 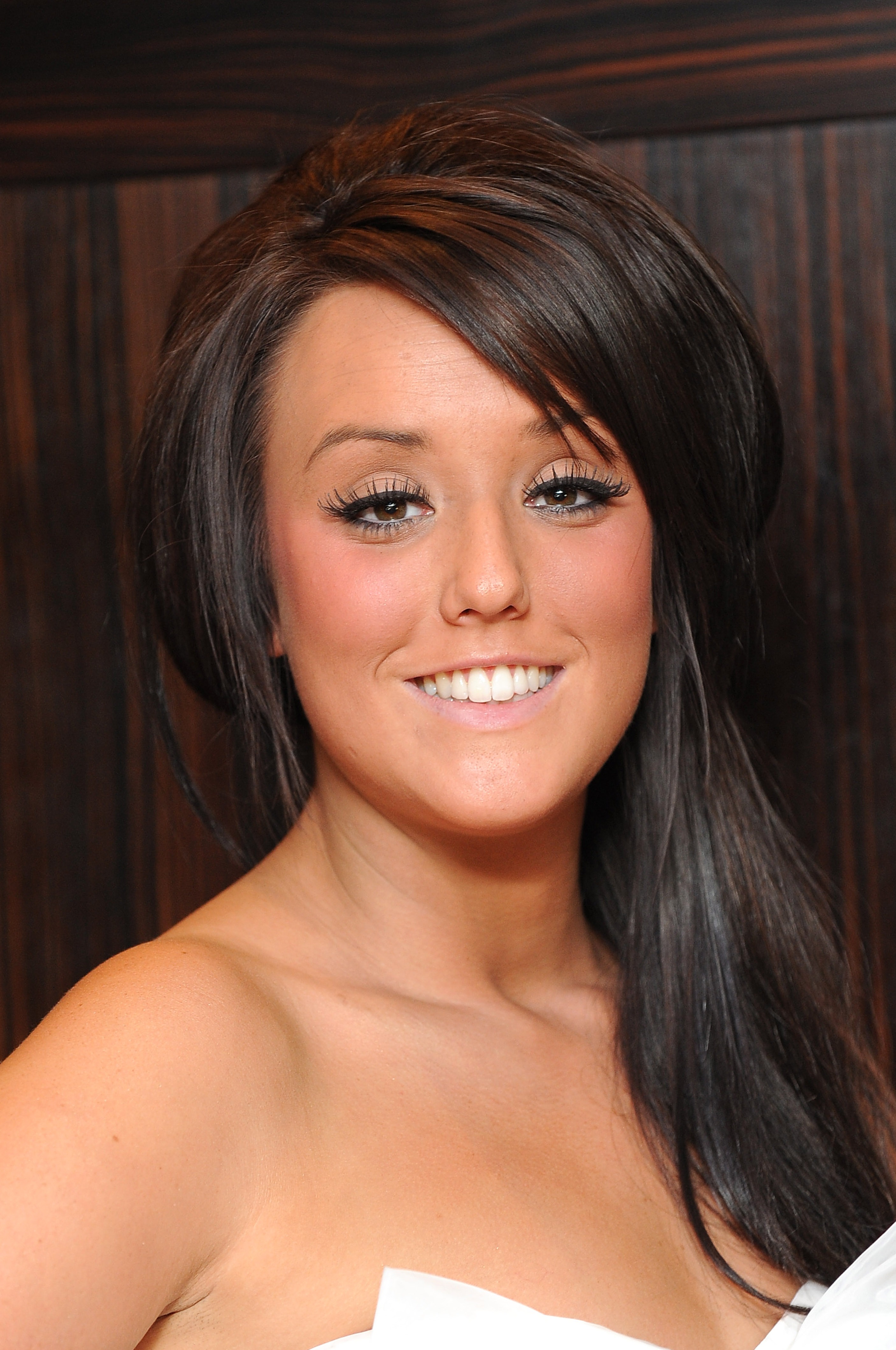 But should that make her fair game for constant scrutiny and, indeed, outright abuse over whether she’s gone “too far”?

Is it right that as someone with a history of depression and who has clearly struggled with her appearance and low self-esteem, she is judged and shamed so publicly about the way she looks?

In her first interview since the documentary aired, Charlotte opens up about the effect it’s had on her and the upset it caused.

It’s an emotional chat and she’s tearful at times. But she is also frequently hilarious and completely without filter, and it’s not hard to see why so many people have taken her to their hearts.

You’ve admitted having had a “public battle” with your appearance and have gone through “issues of self-confidence.” Having changed your looks, do you feel surgery was the answer to those issues?

“I know some people will think it sounds bad, but my fuller lips and nice nose have made me feel great. I’ve got no plans to get any more, but the things I’ve been criticised about are actually what have made me feel confident. 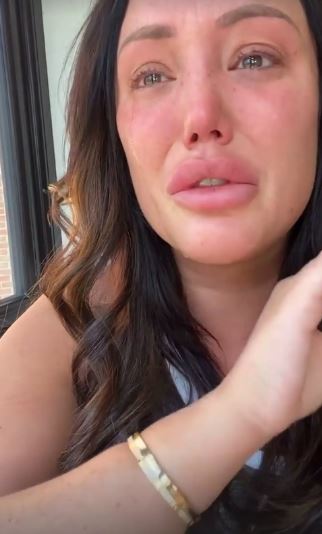 Charlotte broke down on social media after the show airedCredit: Social Media – Refer to Source

“I had a big hump on the side of my nose and I didn’t like it, especially being on TV and having to see it all of the time. I waited until I was 25 – I didn’t have surgery before then, but I felt mature enough to make that decision. And I felt great when I eventually had it done.”

Your lips in particular provoke a lot of discussion…

“I get really angry because I think my lips are really nice! If they saw my lips in real life they would want them! The thing is, I’m really happy with how I look.

“I think I’m quite pretty and sexy, especially after today’s shoot! I felt like Tyra Banks today! I finally feel good in myself. I have 7.2 million people [on Instagram] who love me and not one person, not even a TV show, is ever going to bring me down or make me feel like I need to go back into a corner.”

Let’s go back to the beginning – when did you hear about the documentary?

“About a year ago, my agent Kate was approached by the production company to ask James [Tindale, Geordie Shore co-star], who was also in the same management, to be a talking head discussing my appearance. That’s how she was made aware.” 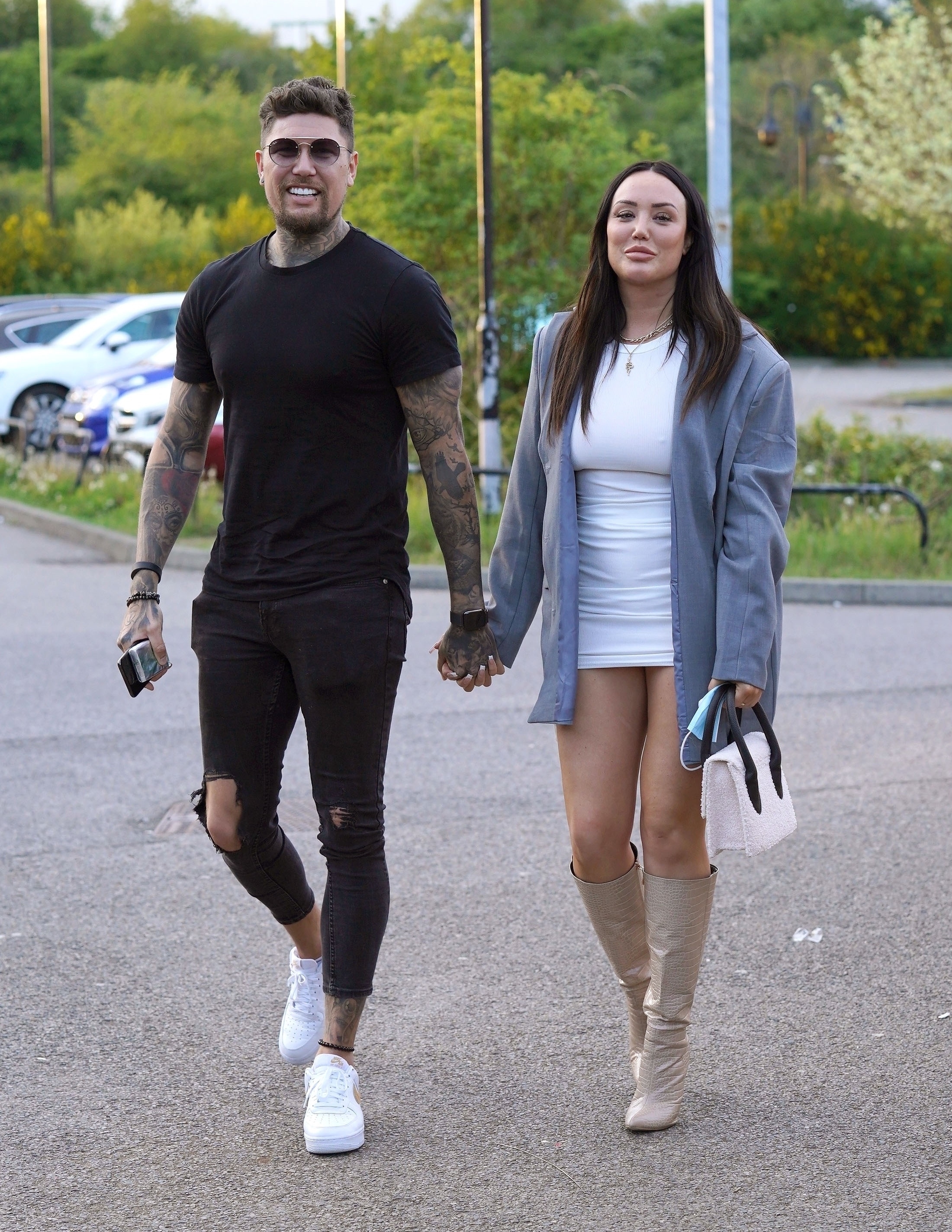 And how did you feel when she told you what they were planning?

“I thought: ‘Why me out of everyone?’ And I wondered if that meant I had the most f**ked-up face in England. [Charlotte starts to cry] To pick me out of everyone, because of what I look like, does that mean I’m the worst? I must have the worst kind of face.”

You’ve said you initially thought you deserved it?

“When I get negativity, I think: ‘I deserve this. I’m a reality star, I went on a TV show getting drunk, eating pizza and wetting the bed.’ So what do I expect people to say about me?

“That’s how I’ve felt for years. I’ve battled with a lot of things constantly being pulled apart because of the cosmetic surgery, and doubting whether I look OK or look ridiculous, and I was worried the show was going to knock me down again and take me to a point where I was like: ‘I look awful, what can I do to fix it?’

Your agent warned the TV production company in a series of correspondence that this wouldbe damaging to you, but they went ahead anyway.

And a year after that initial conversation, you spot the show in the TV listings, right?

“My friend texted to say I was on this show talking about: ‘What have they done to their faces?’ I went to my nana’s and she’d circled it in the Radio Times and said: ‘Charlotte, you’re on the telly tonight.’ 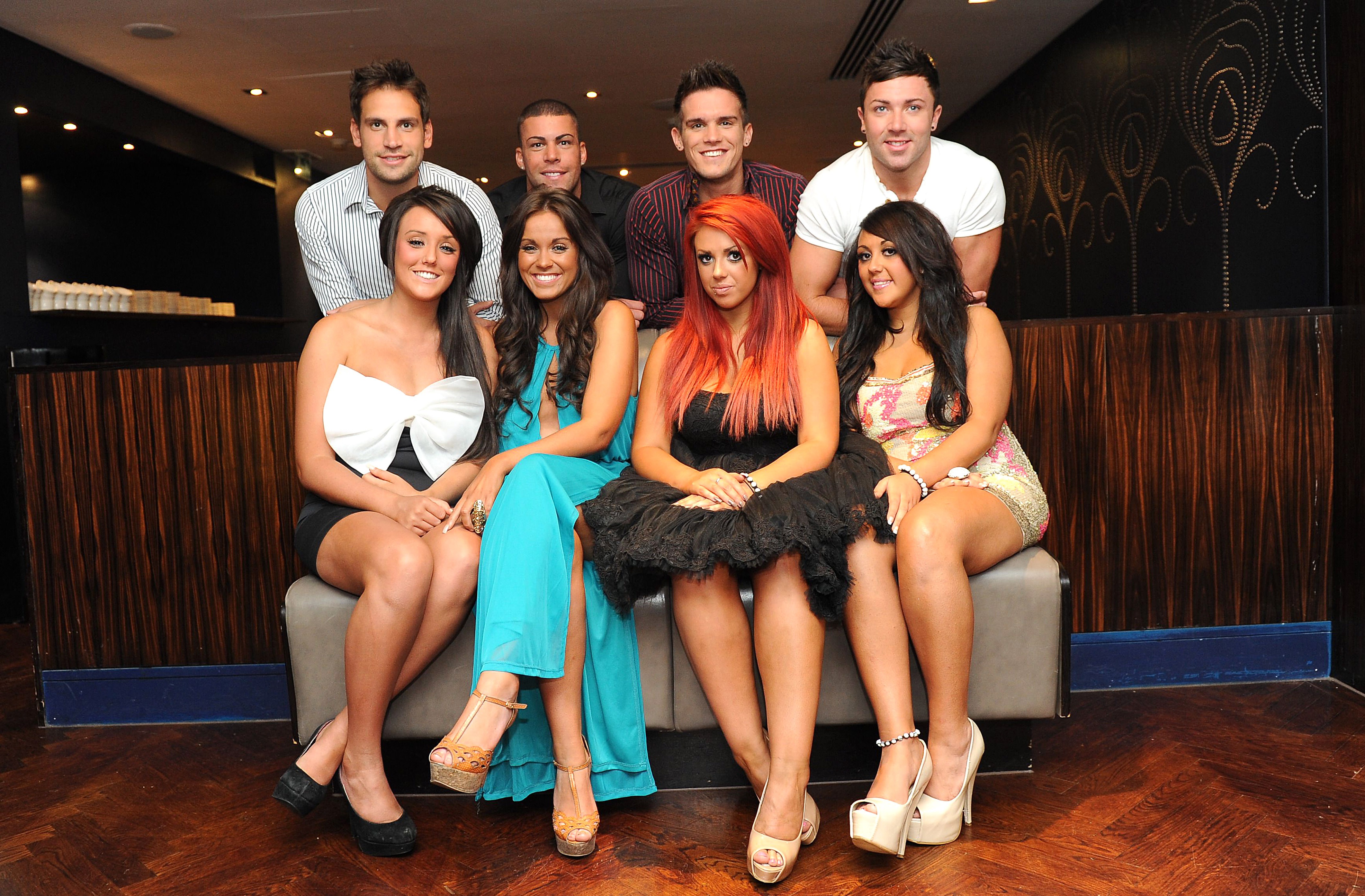 Charlotte with her Geordie Shore castmates in 2011Credit: Rex

“I told her not to watch it. I was getting more people saying things and it wasn’t like Instagram where I could block or delete, it felt unavoidable and I was getting anxious.”

You didn’t watch it yourself, but how did you feel as it was airing?

“I have a coping mechanism for trolling comments, which is to ignore them. But when you put something like that on TV it’s impossible to ignore and it’s hard to cope. I don’t think they understand how you feel as a person when you’ve got messages from friends, family and strangers – it’s plastered all over and you can’t escape.

“They put me in a really awful, vulnerable position. I was getting so many texts and they were making me feel more anxious. I was receiving texts saying: ‘This isn’t on!’ and I was like: ‘Oh god… how bad is it!?’ I couldn’t put it on because I don’t want to see people saying I look bad.

How did it feel going to bed that night?

“I thought I would wake up to abuse – I thought it would incite hateful comments and memes of how bad I look. But actually, it was the opposite.”

What did you find instead?

“I saw the messages of support, other celebrities on their Instagram stories and people who don’t even like me saying: ‘This is not right.’

No one should be shamed if they’re self-conscious about something and they choose to change it. Just as you shouldn’t shame women for not wanting to do that either.

“I cried, not because of the show, but because humans are so amazing and it felt like there was a change happening.”

Was it that support that galvanised you to put out your statement?

Yes! I thought: ‘You know what? F**k them. This isn’t right.’ There are thousands of people who walk the streets every day who have had a nose job, and that’s a choice they’ve made. It’s not down to anyone to tell them: ‘Your nose looks f**ked.’ I don’t know what I expected, I just wanted it to stop. I just think, leave people alone.”

You say “people”, but it’s mainly women who are targeted, isn’t it?

“Being a woman means you are royally f**ked and you can’t do anything right. Nothing. I don’t like shaming anyone. You get people who are very negative about plastic surgery and good for them, everyone is allowed their opinion.

“But no one should be shamed if they’re self-conscious about something and they choose to change it. Just as you shouldn’t shame women for not wanting to do that either. Stop shaming women, full stop! When a man gets a hair transplant, he’s applauded for his bravery, so why in hell are we bringing women down for similar decisions? It’s her body, her choice.

Does your boyfriend Liam (Beaumont, 30, a videographer) help to boost your confidence?

“He gives me so much confidence. He gives me pep talks every day, he tells me that I’m beautiful, and if I ever get sad about anything, he always gives me the biggest hug because he knows I need swaddling.”

Is he The One?

“I bloody hope so. I’ve had enough boyfriends – I’m nearly beating Taylor Swift. I should make an album. My heart is beating so much, everything is going too perfect, I kind of think: ‘Is something bad going to happen?’ He’s everything I’ve ever wanted in a man.”

Finally, you have more followers than anyone else who’s found fame on Geordie Shore. What do you think your ongoing appeal is?

“It’s every single one of the things I get frowned upon for. The bed wetting, the getting really drunk and falling over, the eating kebabs and pizza while I’m naked on the floor… it’s all of those things.

“And I never have or ever will hide that. I don’t feel embarrassed by it, I actually feel pretty lucky that I have built such an amazing life on just being me, on being real. When people say: “You’re a TV star,” I’m like: “I’m not, I’m just me.” I just feel like Charlotte Crosby from Sunderland. And I will never be anyone else.”

Charlotte will tour the UK in the autumn with her One Night With Charlotte show. Tickets are available now at Livenation.co.uk.

For more celebrity stories, A Place In The Sun’s Laura Hamilton spoke to Fabulous about admiring Kate Middleton, hating her legs and her obsession with cleaning.

And here’s how you can copy Stacey Solomon’s budget-friendly Pickle Cottage as she hits Ikea with the kids to kick off the school holidays.

Plus these are the most pampered celeb kids from the Humes’ to the Faiers’ and Kardashian tots – from insane nurseries to flash parties.