BFFs forever! The secret to Tiffani Thiessen and Mark-Paul Gosselaar‘s friendship is all about finding time to spend together with their families.

“We live totally close together. I love his wife. His kids are great, like, we adore [them]. So we have a lot of fun actually hanging out with them,” Thiessen, 47, exclusively told Us Weekly while promoting her partnership with Nutri-Grain.

Although the Saved by the Bell costars try to make time to have double dates with their respective partners, Thiessen admits it can be difficult to coordinate.

“We have before, but it’s been a long time. I actually go back and start shooting a couple more episodes for season two [of Saved by the Bell] next week. Maybe we’ll try to get something [together],” she noted. “It’s hard with kids. He’s got more kids than I do, so he’s got it even harder than I do.”

Thiessen and Gosselaar previously offered fans a glimpse at their friendship when they helped each other out during the COVID-19 pandemic.

In April 2020, the Pitch alum shared on social media that he was in need of some eggs.

“Here’s the deal,” Gosselaar said in an Instagram video at the time. “I ran out of eggs and I called a friend of mine who has chickens and I said, ‘Hey, can you help me out?’ So she left me a few.” 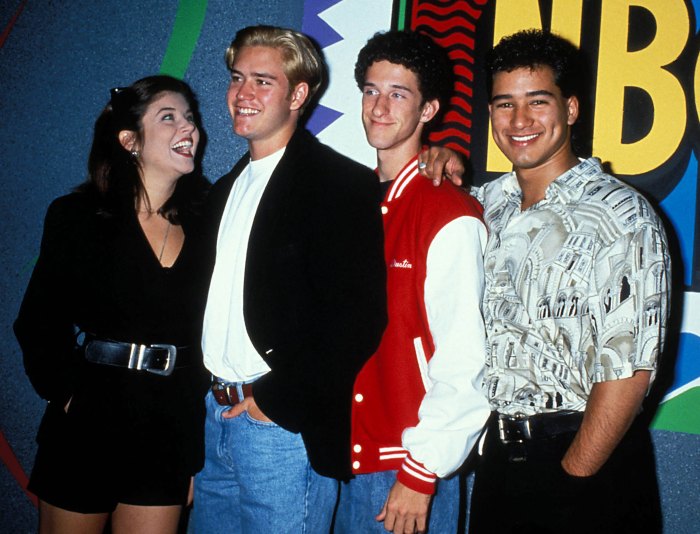 Gosselaar noted in the clip that his friend happened to be Theissen, who played his love interest on Saved by the Bell in the franchise, which ran from 1989 to 1994. The pair returned for the Peacock revival of the show in 2020.

“So here I am picking up this nice little gift. Look at that. How cool is that?” the Passage alum asked while the camera shifted to reveal a small basket of eggs next to a note from Thiessen and Smith, 49, outside of their home.

The note read, “fresh butt nuggets for the Gosselaar family” and it included a signed heart from the entire family.

The White Collar actress confirmed to Us this month that she did receive a gift back from Gosselaar.

“He actually left beer for my husband and I actually made a joke. I said, ‘You know, I’m the one who actually gave the eggs where was my thank you?’ It goes to show you that he loves my husband. Like, the two of them have a great relationship, so they have a lot of fun together,” she told Us.

As Thiessen continues to be busy in her work life, she also partnered with Nutrigrain for their “Getaway from Negotiation” sweepstakes.

She continued: “They have a great thing going where they’re going to actually get people to hopefully follow Nutrigrain and comment. Then they’re going to give five families a chance to win a family vacation up to $10,000. [It’s] really just showcasing and showing that you can actually spend better quality time with your family besides negotiating about food.”

With reporting by Mandie DeCamp