Travis Barker shared an ominous social media message hours before he was hospitalized on Tuesday, June 28.

“God save me,” the 46-year-old musician tweeted on Tuesday, causing some of his fans to be concerned as to what it meant.

Later that evening, Barker was hospitalized after reportedly experiencing health issues, per TMZ. The Blink-182 drummer and his wife, Kourtney Kardashian, arrived at the West Hills hospital in Los Angeles after he suffered some sort of health problem.

Barker was then taken by an ambulance to Cedars-Sinai Medical center, according to the outlet. The Kardashians star, 43, was photographed alongside her husband during the hospital exchange.

The Poosh founder was spotted wearing a black hooded sweatshirt with skeleton details and black sweatpants as what escorted the “I’m Not OKAY” musician from the ambulance into the hospital. Barker, for his part, was seen in in a black hoodie and could be seen holding Kardashian’s hand in one picture.

“Prayers. I just heard you were hospitalized,” one of Barker’s Twitter fans wrote on his initial cryptic message after learning of his health emergency. “Hope you have calm energy an good doctors surrounding you.”

Fellow musician Blackbear also sent his well-wishes to the California native, commenting with a bandaged heart emoji on Barker’s tweet.

Barker’s daughter, Alabama, seemingly reacted to her dad’s trip to the emergency room via her Instagram Story on Tuesday. “Please send your prayers,” the 16-year-old wrote with a worried emoji.

The Meet the Barkers alum’s health scare comes just weeks after he celebrated his first Father’s Day as a dad of six. 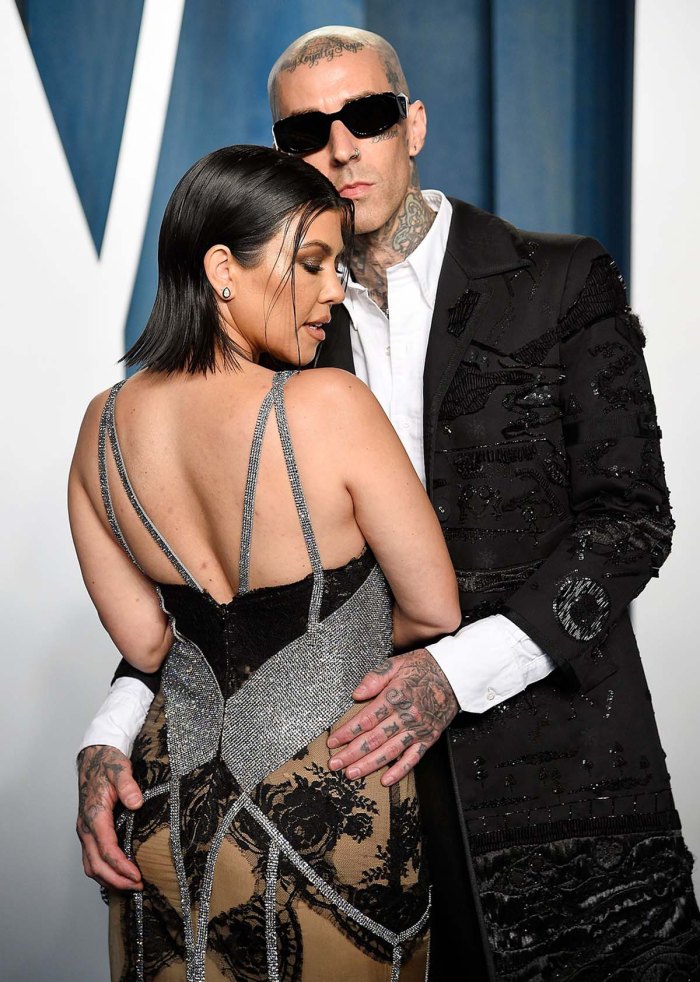 Barker shares son Landon, 18, and daughter Alabama with ex-wife Shanna Moakler, whom he split from in 2008. He is also a very involved in 23-year-old stepdaughter Atiana De La Hoya’s life, who is the daughter of Moakler, 47, and her ex Oscar De La Hoya.

The rocker added three more little ones to his crew when he married Kardashian earlier this year. The reality star is mother of sons Mason, 12, and Reign, 7, and daughter Penelope, 9, whom she shares with ex-boyfriend Scott Disick.

Barker and Kardashian tied the knot three times between April and May. Their first ceremony was a non-binding affair in Las Vegas after the April 3 Grammys, followed by a courthouse union in Santa Barbara, California, in early May.

The twosome celebrated their love with family and friends in Italy later that month — and all of their children were on hand to toast the happy couple.

Stronger together! It was love at first sight when Britney Spears and Sam Asghari met in October 2016 on the...

Nick Carter: A Day in My Life