Heating up! Travis Barker shared a steamy love note that he received from girlfriend Kourtney Kardashian on Saturday, February 20.

“To lots of fun adventures,” the Keeping Up With the Kardashians star, 41, wrote in the message the drummer, 45, shared to his Instagram Stories. “May we destroy each other completely. Love, Kourtney.”

The destruction line echoed a tweet Barker sent out earlier this week, which prompted some fans to ask if he was OK. One follower suggested that “destroy” was code for “love,” while another referenced his relationship with Kardashian and wrote, “As long as you’re both happy and all the kids are safe, then I hope you destroy each other (or whatever else you both want lol) for as long as you choose to be together.” 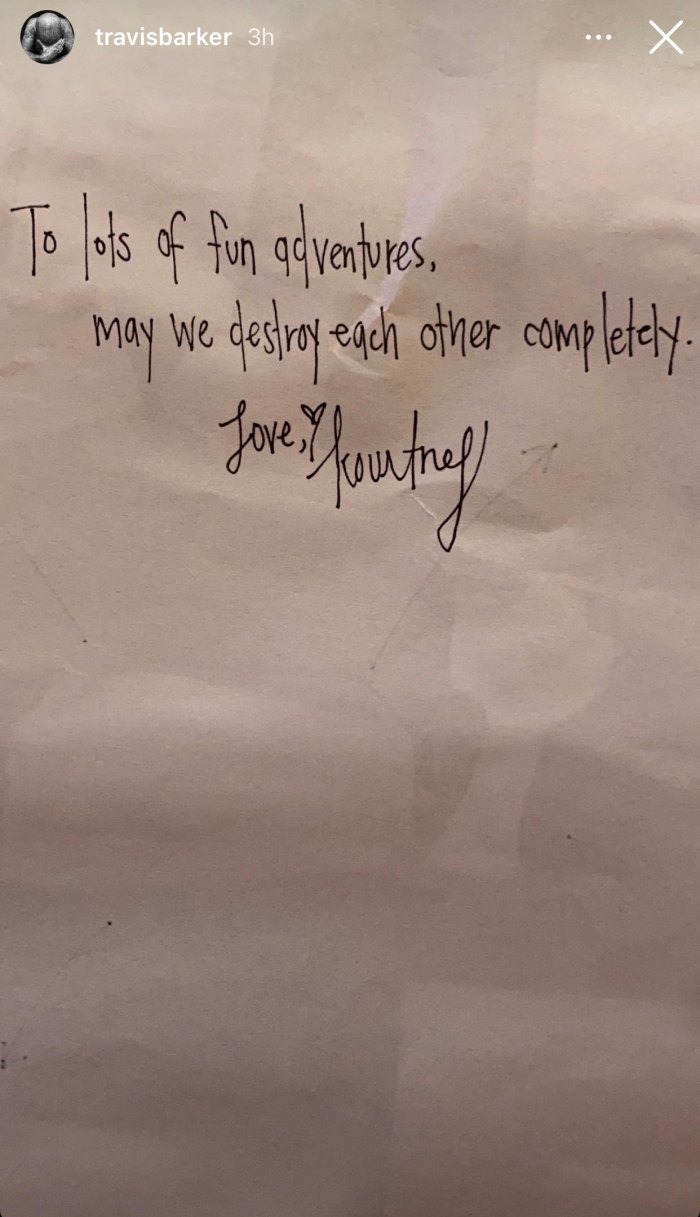 The note from Kardashian came less than a week after the pair went Instagram official with their romance, sharing a photo on their Instagram accounts of their hands intertwined after they spent Valentine’s Day with each other.

May we destroy each other completely

“Kourtney and Travis have been spending a lot of time together, but they’re taking their time and trying not to move too fast,” a source exclusively told Us Weekly earlier this week. “No one is surprised by their relationship.”

The pair, who have known each other for years and are neighbors in the same Calabasas, California, gated community, have “so much in common,” the insider added.

“They have big modern families [and they] both are dedicated to their kids. They come from these modern families with modern relationships,” the source continued. “Both of their families are supportive. It’s still very new, but they are both very excited by how easy it all has been.”

The former Miss USA, 45, spoke to the New York Post‘s Page Six on Friday, February 19, about the new couple after she reportedly “liked” a comment from a fan on Instagram saying that Barker had “downgraded big time” by dating the reality TV star.

“He’s my friend and coparent, and I want him to be happy,” Moakler told Page Six. “And if being with her makes him happy, and she’s happy, I’m happy for both of them, honestly.”

The former Meet the Barkers star added, “He can handle that Kardashian drama.”