Elliott is the new carbon-positive, vegan trainer brand to buy from

Look under your desk and most people will see a pair of trainers.

Once seen as a shoe for the weekends or the running track, rubber-soled sneakers are now estimated to be worn by two out of three people to the office and an average person’s trainer wardrobe is worth £474, according to new research by Shoeaholics.

But while many people sip their latte out of a reusable bamboo cup and that kombucha through a paper straw, the eco-credentials of many trainers is next to nothing.

That’s not to say many brands aren’t scrambling to create a carbon-neutral shoe in their range but one company, which started in Denmark, is offering a completely carbon-positive selection of footwear — that is, one tonne of CO2 is offset for every pair, more than covering the emissions created in producing them.

Launched in 2019, Elliott footwear was started by Mikkel Bang and Lars Balstrup Joergensen in Copenhagen with Sam Carew joining later.

Elliott claims to be the world’s first climate-positive sneaker collection and is a member of the UN’s climate change initiative. 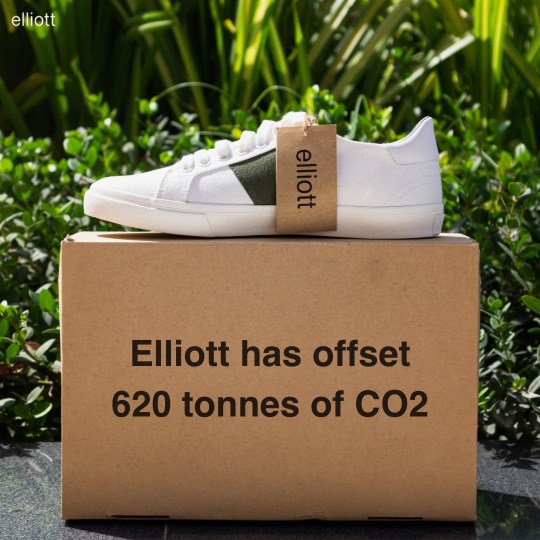 With a typically understated Scandinavian look, the range is made from vegan leather or vegan suede or recycled canvas. Customers are offered money off a new pair in return for sending them to Elliott for recycling.

The shoes are made in Vietnam and Spain and partners with Chooose, a Norway-based climate action enterprise.

Sam says that instead of planting trees like competitors, Elliott went for a measurable metric to make it more accountable.

‘The fashion industry is monumental in its impact — it is the second dirtiest industry in the world,’ Sam tells us. ‘We have allowed ourselves to get into the situation when we think it’s just a T-shirt or a pair of jeans, why spend £200 on a pair of jeans when I could spend £20? 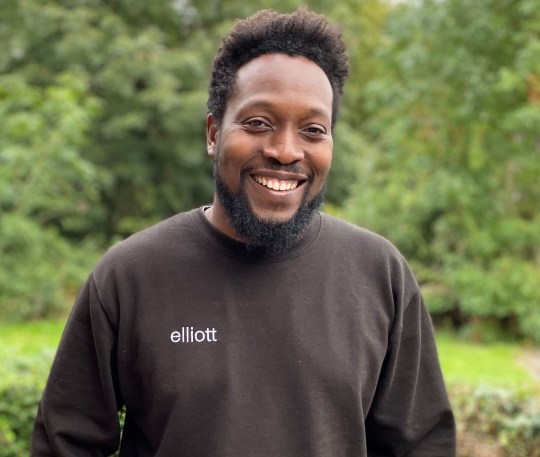 Sam was inspired to start a sustainable business when he realised the environmental impact of his large family (Picture: Lisa-Marie Carew)

‘But there is an additional cost to buying cheap disposable products.’

Sam says he was spurred on to help create a sustainable solution to an everyday product we all use when he became a father of four. ‘We were pregnant with Number Four, and I saw a YouTube video on the top ten things to beat climate change.

‘The Number One was have less children. It got me thinking about my own impact on the climate crisis. This was an opportunity to make a difference in a good way.’

Having worked in IT and as a 43-year-old father, Sam seems like an unlikely candidate to be at the forefront of a new trainer company. But it is this change of career and direction that he believes is a good analogy for choosing a more sustainable way of life.

The team at Elliott also all work on it while doing other jobs. ‘You don’t have to be 19 to start a business. I’m 43 with four kids, a wife and a mortgage. You just have to start, don’t beat yourself up, just keep moving,’ he says.

Elliott is not yet a global phenomenon — Sam says that so far the company has sold around 700 pairs — but awareness of the brand is growing.

Gwyneth Paltrow. Evan Agostini/Invision/AP/ShutterstockTake two! If you’re a fan of Goop’s “This Smells Like Vagina” candle, listen up. Because Gwyneth...