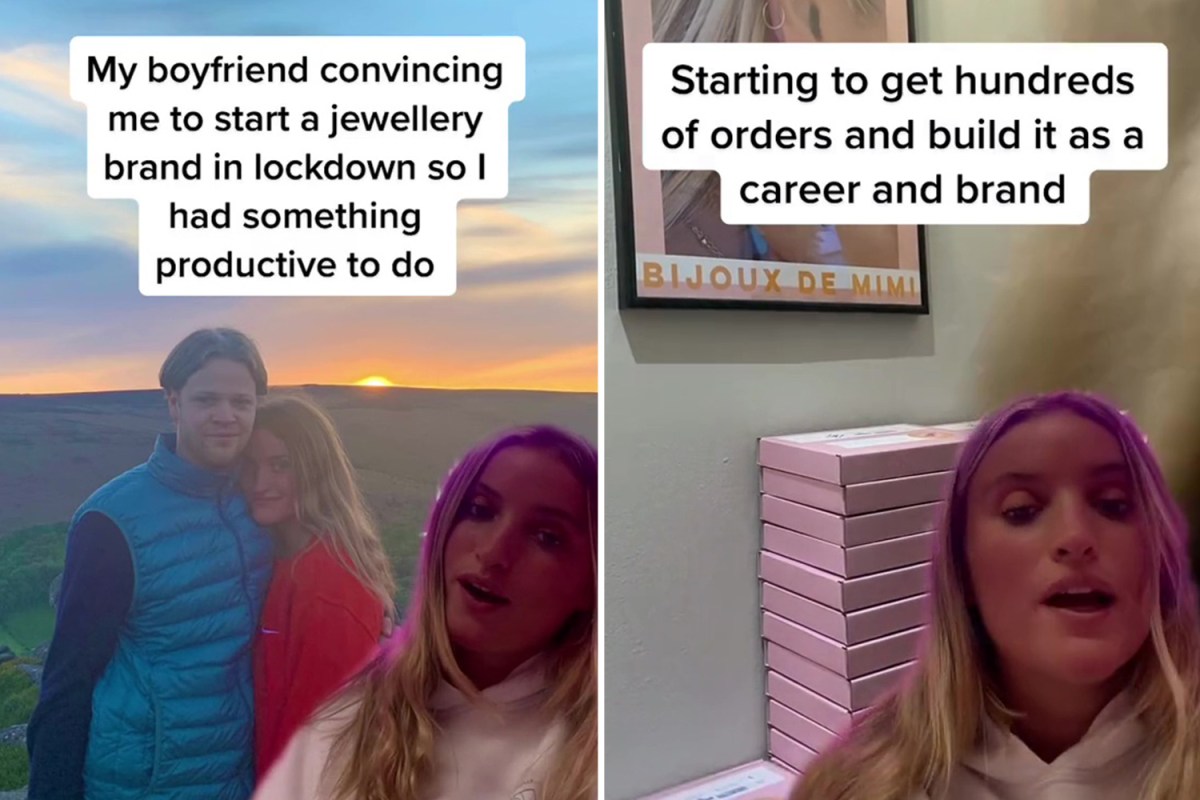 STUCK at home and bored in lockdown, 18 year-old Amelia Grace Hitchcock-Merritt didn’t have a plan on what to do next.

She has decided not to carry on with studying Fashion at University and had just found out that her summer internship had been cancelled.

Amelia’s boyfriend convinced her to create a jewellery brand in lockdown at age 18 and she it is now making six figuresCredit: TikTok/@ameliahitchc0ck/

Bored and worried about what the future might hold, her boyfriend suggested – ‘why don’t you just start a business?’

Many would laugh off such a question but Amelia took the plunge and took her passion for fashion that step further.

Before Bijoux De Mimi was founded, Amelia discovered it was absolutely impossible to find colourful Huggie Hoops anywhere in the UK or online.

With a love for simple splashes of colour, Amelia introduced the colour collections over time and continues to design new pieces and introduce new colours.

Since then Bijoux De Mimi has gone from Amelia packaging parcels at home over summer 2020 to the hundreds of orders being sent out from a near-London warehouse.

Amelia is now 20 and is based in her Notting Hill office with the help of a wonderful team.

Amelia is a six-figure jewellery business owner and has shared her story to her TikTok account ‘ameliahitchc0ck’.

She said: “How I started my six-figure jewellery company at the age of 18.

“So Bijoux De Mimi started on the 30th June 2020, just after the very first lockdown.

“I had already made my decision not to carry on with studying fashion at University and had literally just found out that my summer internship had been cancelled, so I didn’t really have a plan. 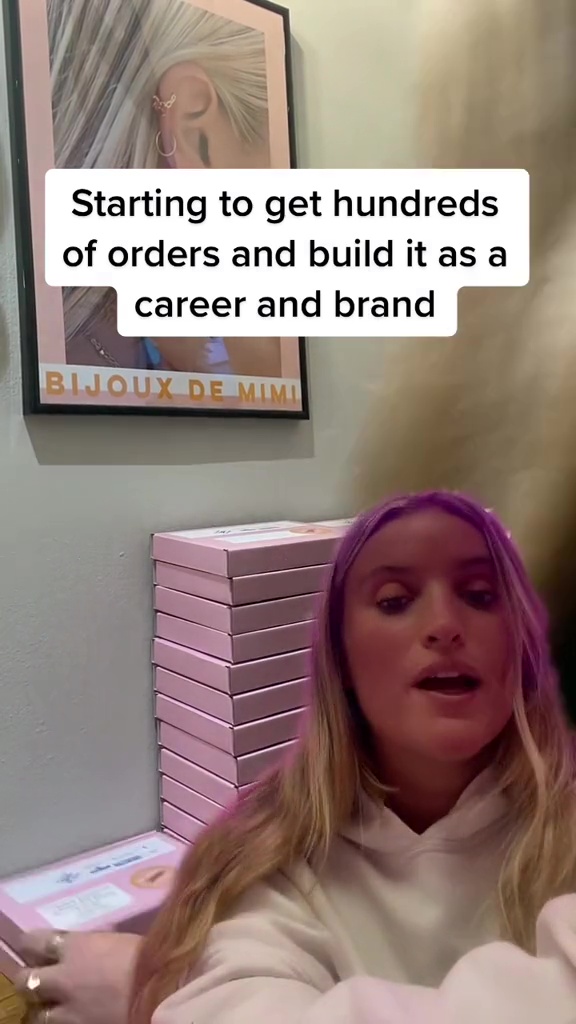 Orders came flooding in and Amelia worked on building the jewellery business into a career and a brandCredit: TikTok/@ameliahitchc0ck/

“Which is when my boyfriend said: ‘Well, why don’t you just start a business?’

“So with just £400, a lot of research and noticing that there was a niche in the market for colourful huggie hoops, I started Bijoux.

“So now we design the jewellery in-house but before we would get them from a wholesaler.

“It took quite a long time to find the right place but once I did, I worked with them for about six months.

“The main things that have really helped Bijoux blow up have been influencers and viral TikTok videos.

“And now the name has become so much more recognised that we really grow organically.

“We used to package all of the orders at home until we decided that there were too many orders and we needed to move it into a warehouse and fulfilment company, which is where it still is now.

“And now I work for my Notting Hill office with a wonderful team.

“The company grew more and I decided we needed a bigger office with a bigger team.

“Hundreds of people came to visit our pop-up shop on the 10th July on Oxford Street.”

Amelia revealed that she started the brand so she “had something productive to do” and gave “it a go for the sh*tz and gigs” but soon realised she was actually getting sales.

After getting hundreds of orders she then got her first intern to grow the brand even more.

The company then became a known brand so she started employing more people and got a bigger office.

This then led to the brand doing regular events and campaigns.

Bijoux De Mimi was then awarded the highly commended Emerging Brand of the Year and Amelia was invited to speak at London Week.

And this is all in one summer.

Amelia said: “It has been an incredible journey and I am so grateful for all the amazing people who have helped and encouraged me along the way.

“Thank you so much to all of our amazing customers who continue to shop Bijoux De Mimi, as we continue to grow we can’t wait to share with you all of our new collections and collaborations with brilliant influencers, photographers and designers.”

Clearly people are impressed at Bijoux De Mimi’s success as Amelia’s TikTok channel has racked up over 22k likes.

Many were impressed at just how quickly the brand has grown and were praising Amelia for her success.

One person said: “This is acc so inspiring.”

Another added: “I didn’t know Bijoux De Mimi was a lockdown start-up, you’ve come so far so quickly!”

A third commented: “Literally making me want to start my own clothing brand more and more.” 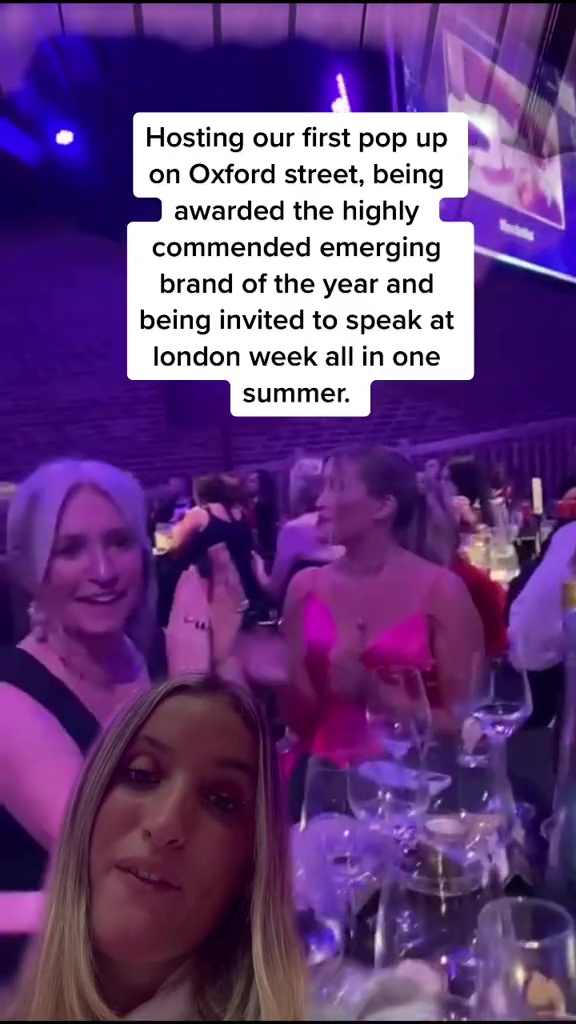 All in one summer the brand launched, had a pop up shop and won Emerging Brand on the YearCredit: TikTok/@ameliahitchc0ck/

Meanwhile, I put £15 into a homeware brand when my endometriosis left me fearing for my job – now I’ve made £1m thanks to Mrs Hinch.

Also, I fled a dictator & lived in a refugee camp – now my haircare company makes £1.4m, I googled how to be a businesswoman.