Sending a message. Jason Sudeikis showed up to the Ted Lasso season 2 premiere on Thursday, July 15, and to no one’s surprise, he skipped out on his suit.

While a laidback red carpet look is par for the course for the 45-year-old actor, his sweater for the evening did carry a special meaning. It was a show of support for three of England’s soccer players.

Marcus Rashford, Jadon Sancho and Bukayo Saka, who are all Black, were racially abused on social media following England’s loss in the Euro 2020 final. Sudeikis’ sweater for the evening had each of the player’s first name’s written in white.

Fans took to Twitter to applaud the star’s outfit choice, many comparing him to the IRL Ted Lasso.

“Man, Jason Sudeikis keeps getting cooler and cooler,” one person captioned a retweet of his red carpet attire. Someone else chimed in, “Jason Sudeikis is a goddamn national treasure.” 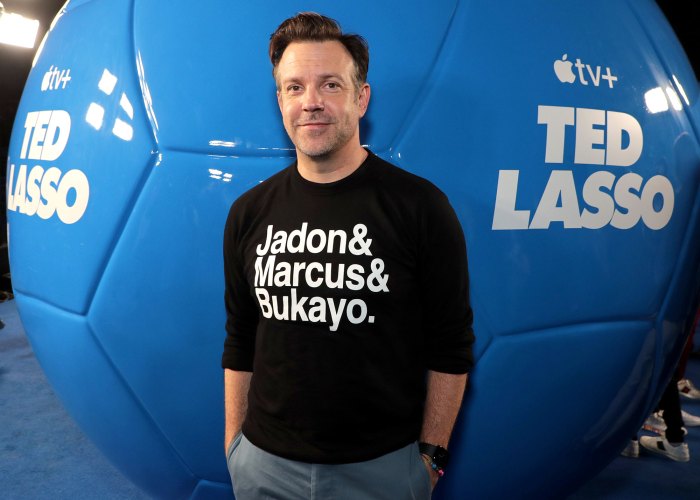 While the star’s outfit choice was symbolic, his accessory game was also very special.

The We’re the Millers actor’s daughter, Daisy, sent him on his way with a handmade beaded bracelet that spelled out “Daddy.” Sudeikis shares his daughter, 4, and son Otis, 7, with ex-fiancée Olivia Wilde.

“She just made it because she can’t not be creative,” the actor told Entertainment Tonight, calling the toddler a “little artist-to-be.”

This isn’t the first time that Sudeikis has sent a meaningful message with his attire. At the 2021 SAG Awards in April, he virtually tuned in wearing a sweater with a social justice spin.

His navy Gucci sweater, which retails for $1,000, had the phrase “My Body My Choice” written in white. According to the brand’s website, the piece was designed to champion “support of reproductive rights.”

Aside from the significance though, Sudeikis has also made it clear that in a post-Covid world he prioritizes comfort over all else — red carpet or not.

Earlier this week, he explained that he was “neither high nor heartbroken” at the 2021 Golden Globes, where he rocked a tie-dye sweatshirt.

“I wore that hoodie because I didn’t wanna f—king wear the f—king top half of a Tom Ford suit,” the actor told GQ, explaining that it was the middle of night in London when he tuned in. “I love Tom Ford suits. But it felt weird as sh—t.”